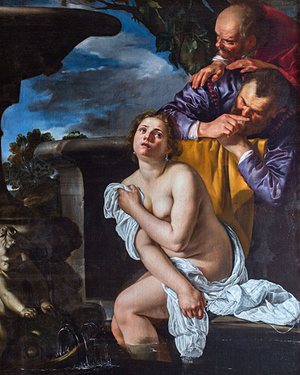 By virtue of the excellence of her work, the originality of her treatment of traditional subjects and the number of her paintings that have survived, Artemisia Gentileschi was the most important woman painter of Early Modern Europe.

She was both disdained and praised by contemporary critics, recognized as having genius, but also seen as monstrous, for she was a woman exercising a creative talent thought to be exclusively male. She “has suffered a scholarly neglect that is almost unthinkable for an artist of her caliber’’ (Mary D. Garrard).

Artemisia Gentileschi was born in Rome on July, 8th, 1593, as the eldest child of the Tuscan painter Orazio Gentileschi and Prudentia Monotone Gentileschi. Her mother died when she was twelve.

Artemisia was introduced to painting in her father’s workshop, showing much more talent than her brothers, who worked alongside her. Her father trained her as an artist and introduced her to the working artist of Rome, including Michelangelo Merisi da Caravaggio, whose chiaroscuro style greatly influenced Artemisia Gientileschi’s work.

She had little or no schooling, other than artistic training; she did not learn to read and write until she was adult. Orazio was a great encouragement to his daughter; during the seventeenth century women were considered lacking the intelligence to work.

At the same time, Artemisia had to resist the traditional attitude and psychological submission to this brainwashing and jealousy of her obvious talent.

By the time she was seventeen, she had produced one of her best known work, a stunning interpretation of Susana and Elders, from 1610. The painting shows how Artemisia assimilated the realism of Caravaggio without being indifferent to the language of the Bologna school, which had Annibale Carracci among its major artists.

It is one of the few paintings on the theme of Susanna showing the sexual accosting by the two elders as a traumatic event.

Among those with whom Orazio Gentileschi worked was the Florentine artist Agostino Tassi, whom Artemisia accused of raping her in 1612, when she was nineteen. When her father found out, he filed suit against Tassi for injury and damage, and, remarkably, the transcripts of the seven-month-long rape trial have survived.

According to Artemisia, attempted to be alone with her repeatedly, with the help of family friends, and raped her when he finally succeeded in cornering her in her bedroom. He tried to placate her afterwards by promising to marry her, and gained access to her person and her bedroom repeatedly on the strength of that promise, but always avoided following through with the actual marriage.

She was examined by midwives to determine whether she had been ‘’deflowered’’ recently, or a long time ago. The trial followed a pattern familiar even today- she was accused for not having been a virgin at the time of the rape and of having many lovers.

Probably more galling for an artist like Artemisia, Tassi testified that her skills were so pitiful that he had to teach her the rules of perspective, and was doing so the day she claimed he raped her.

Tassi denied having had sexual relations with Gentileschi, brought many witnesses to testify that she was ‘’an insatiable’’ whore. Their testimony was refuted by Orazio, who brought countersuit for perjury. Artemisia’s accusations against Tassi were corroborated by a former friend of his who recounted Tassi’s boasting about his sexual exploits at Artemisia’s expense.

Tassi had been imprisoned earlier for incest with his sister-in-law and was charged with arranging the murder of his wife. He was convicted on the charge of raping Gentileschi and he served under a year in prison and was later invited again into the Gentileschi household by Orazio.

During and soon after the trial, Gentileschi painted Judith Slaying Holofernes (1612-1613). The painting is remarkable for its technical proficiency, but also for the original and impressive way in which Gentileschi portrays Judith, a pretty popular subject for art; her first Judith beheading Holofernes painting, clearly a cathartic expression of her rage and violation.

She drew all faces of Judith as hers face and Holofernes are Tassi on her painting. Unlike other ‘Judith Beheading Holofernes’, Judith looks like a strong woman and she has a tenacious grip.

In November of 1612, after the long trial, the pregnant Artemisia was married to a Florentine artist and family friend Pietro Antonio di Vincenzo Stiattesi. They moved to Florence and Arthemisia gave birth to a daughter named either Prudentia or Palmira.

In Florence, Gentileschi returned to the subject of Judith, completing Judith and her Maidservant in 1613 or 1614. During this Florence period of her life, she became the protégé of Michelangelo the Younger, nephew of Michelangelo, who favored her and paid her well for her work on the life of Michelangelo for the Casa Buonorotti.

Artemisia and her husband worked at the Academy of Design, and Gentileschi became an official member there in 1616. It was a remarkable honor for a woman of her day, and probably made possible by the support of her Florentine patron, the Grand Duke Cosimo II of the powerful Medici family.

During her years in Florence, he commissioned quite a few paintings from her, and Gentileschi left Florence to return to Rome upon his death, in 1621.

Afterwards, she probably moved to Genoa that same year, accompanying her father who was invited there by a Genovese nobleman. In Genoa she painted her first Lucretia (1621) and her first Cleopatra (1621-1622), the impressive pieces of artwork.

She also received commissions in nearby Venice during this period and met the great Anthony Van Dyck, a very successful painter of the era, and Sofonisba Anguissola, a generation older than Gentileschi and one of the handful of women who worked as artists.

Gentileschi soon returned to Rome and lived there as head of household with her daughter and two servants. Evidently, she and her husband had separated and she eventually lost touch with him altogether. Gentileschi later had another daughter, and both are known to have been painters, though neither their work nor any assessment of it has survived.

During this stay in Rome, a French artist, Pierre Dumonstier le Neveu, made a drawing of her hand holding a paintbrush, calling it a drawing of the hand of “the excellent and wise noble woman of Rome, Artemisia.”

Her fame is also evident in a commemorative medal bearing her portrait made some time between 1625 and 1630 that calls her pictrix celebris or “celebrated woman painter.”

Forever in search of patronage, she lived again in Florence and Rome during the 1620s, and then moved in 1630, to Naples, the second largest city in Europe, where commissions were available. During this time, she was struggling to reconcile her own artistic preferences with the preferences of her patrons, who made her livelihood possible

She collaborated with a number of the male artists while in Naples. In this period, she painted her great Self-Portrait- the Allegory of Painting (1630), a work unique in its fusing of art, muse, and artist, than another Lucretia, The Annunciation (1630), another Cleopatra, and many other great works.

Around 1637, desperate for money to finance her daughter’s wedding, Gentileschi began looking for new patrons. And she found him, eventually. It was King Charles I of England. She was in residence at the English court from 1638 to 1641, among the many continental artists invited there by that art-collecting king Charles I.

She may have gone specifically to assist her father, Orazio, in a massive project to decorate the ceilings of the Queen’s house at Greenwich.

For that commission, Artemisia painted the Allegory of Peace, including most of its Muses – and most notably, Clio, Muse of History. Her ailing father died in 1639, but Artemisia continued to work in England until 1642.

Artemisia returned to Naples, around 1642, where she lived until her death. She remained very active as a painter there, producing at least five variations on Bathsheba and perhaps another Judith.

During her last ten years, her primary patron was Don Antonio Ruffo; more is known about these years than any others because 28 of her letters to him which still survive.

The timing and the cause of Artemisia’s death is not known, but she most likely died in 1652.

Unfortunately, the rape trial, her unconventional life as a female painter, and her numerous paintings of powerful women struggling against male dominance did not endear her to the male aristocracy.

The only record of her death are two satiric epitaphs–frequently translated and reprinted that make no mention of her art but figure her in exclusively sexual terms as a nymphomaniac and adulterer.

Those derogatory epitaphs were published about her in 1653, such as: “By painting one likeness after another/ I earned no end of merit in the world/ While, to carve two horns upon my husband’s head/I put down the brush and took a chisel instead.”

According to Art historian Charles Moffat, Artemisia may have committed suicide, which would explain why the cause of her death was not recorded.

Thirty four of her paintings survive today, as well as the transcript of the rape trial, published in full in Mary Gerrard’s ‘’Artemisia Gentileschi, The Image of the Female Hero in Italian Baroque Art’’.

Today she is regarded as one of the most progressive painters of her generation; an artist who fought with determination—using the weapon of personality and of the artistic qualities—against the prejudices expressed against women painters; being able to introduce herself productively in the circle of the most respected painters of her time, embracing a series of pictorial genres that probably were more ample and varied than her paintings suggest.