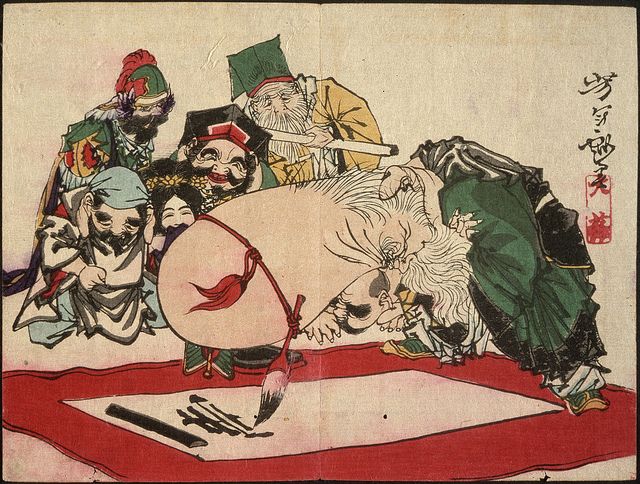 In 1853, Japanese ports reopened to trade with West. Along with many other goods, Japanese art was one of the main things which were imported into the western art world.

On the crest of that wave were woodcuts prints by masters of the ukiyo-e school printmaking, which transformed Impressionist and Post-Impressionist art by demonstrating that simple, transitory, everyday subjects from ‘’the floating world’’ could be presented in appealingly decorative ways.

Like photography, the style of these prints also contributed significantly to the ‘snapshot’ angles and unconventional compositions which would become one of the main characteristic of these movements. When Japan took a pavilion at the World’s Fair of 1867, Parisians saw the first formal exhibition of Japanese art. The exhibition attracted a great deal of interest and resulted in all things Japanese becoming stylish and fashionable.

The French gave this new semi-movement the name ‘’Japonisme’’. It is quite ironic that at the same time when Japanese woodblock printing came to a decline because of the threat of civil war in Japan, it had found its way to inspire many European artists. It is said that James Whistler discovered Japanese prints in a Chinese tearoom nearby London Bridge and that Claude Monet first came upon them used as wrapping paper in a spice shop in Holland.

The influence of Japan on European art was very different from the influence of other oriental art forms from earlier periods. Previous art pieces from China and other countries were seen as a sort of ‘fancy’ or fantasy for collectors, not having any true impact on European artists of the time.

In addition, Japan was secluded for centuries and the appearance of it art caused a new wave of excitement, and also, artists tried to understand what made Japanese art so unique and were inspired by the works of great Japanese artists.

It can be found several differences between ukiyo-e and western art from the same period. For instance, woodblock printing created an illusion of depth which was practically non-existent in Europeans works of the time.

Ukiyo-e had much stronger emphasis on creating dark outlines in the works, due to the fact that the Japanese consider fine handwriting an important skill by itself and the art of writing is irrevocably connected with Japanese art.

The subject matter of the ukiyo-e in 18th and 19th centuries was drawn from everyday life, celebrated the non-heroic, and was based on the idea that all is transient. These prints were mass-produced as woodcuts and were cheap enough for the average Japanese person, or Parisian, to afford.

In this period, the great master printmakers were Utamaro, Hiroshige and Hokusai.

The art of Japan, in particular the ukiyo-e print, was a revelation to Western artists. A stylized, narrative Japanese art form that emphasized flowing outlines, strong sense of design and simplified forms. This distinctive style of art flourished in Japan from the mid-seventeenth to the mid-nineteenth century.

Impressionism was not only about the specific colors and art based on empirical analysis and the senses, but mainly about the freedom and rather than a specified movement, it is collection of artists who rebelled against conventional art forms and each of them had their own unique style; their ‘freedom’ being the most common factor which bound them together.

The lack of lines, one of the principles in which impressionism differed from previous styles. The impressionists preferred to use natural brushstrokes, without any lines to border their creative vision, and these strokes appeared to be ‘broken’ to the unaccustomed eye.

The movement which followed impressionism was post-impressionism. It was mainly a natural answer to impressionism with a higher focus on experimenting with colors in order to achieve very personal and sacred image. The influence of ukiyo-e can be seen even within the works of such a popular painter as Vincent van Gogh. He was introduced to ukiyo-e by his brother Theo, when he moved in Paris.

It is believed that he became a collector of Japanese woodblock prints, and also did some copies; he copies two pieces of eastern woodblock prints, adding his own personal touch to them. His famous work called ‘’ The Courtesan’’ (pictured above) is inspired by Japanese art.

The painting bears resemblance to the style of woodblock printers, yet it also has Van Gogh’s personal style characteristics and his typical brushstroke.

Hokusai Katsushika was one of the most important ukiyo-e artists of Japan who created several volumes of woodblock prints called ‘Manga.

Today, the term manga refers to a type of Japanese comic books; there is no evidence pointing to a connection between Hokusai’s manga and today’s comic book art – although the first mangas are said to have surfaced in the late nineteenth century, some time after Hokusai’s manga was published posthumously.

It is more widely accepted that manga as a comic book form came from American influence which adopted into the Japanese culture. Hokusai’s manga series had a wide influence on many French Impressionists and Post-Impressionists. It was mainly seen on the prestigious French printmaker Felix Bracquemond, a husband to one of the well-known female artists of impressionism, Marie Bracquemond.

He was intrigued by the representation of nature and encouraged many other artists to study the great art from Japan.

Edgar Degas and his friend James Tissot were among the earliest collectors of Japanese art in France. Also, their own art was affected by exotic things in very different ways; Unlike Tissot, and others who came under the spell of Japan, Edgar Degas avoided staging japoneries that featured models dressed in kimonos and the conspicuous display of oriental props.

He absorbed qualities of the Japanese aesthetics that he found most sympathetic: asymmetrical compositions, aerial perspective, elongated pictorial formats, focus on singularly decorative motifs, spaces emptied of all but abstract elements of line and color.

He was fascinated by the depiction of women in manga, as he himself focused very often on ballerinas, dancers and other women in movement. See his work below, “The Dance Class”. Degas’ work also shared similarities with Japanese woodblock prints in the theme of women in day-to-day situations. Mary Cassatt, an American artist who lived in Paris, and the one of Degas’ close associates, had ordered and collected many pieces of ukiyo-e, like many of her contemporary colleagues, was intrigued by them.

After visiting a large exhibition of ukiyo-e prints at the École des Beaux-Arts in Paris, in spring 1890, she produced a set of ten color etchings in open admiration of their subjects, technical innovations and compositions.

In Japanese prints, like those of Utamaro, she found a fresh approach to the description of common events in women’s lives.

Among the things that fascinated Cassatt were the non-complex compositions from unusual standpoints, the blank spaces between the colors and the simple lines that were able to speak to the observer. She created several print series using the woodblock printing technique common in Japan; she even undertook to adding color to these prints by using several different block of wood with different colors spread onto them.

She used these prints to make her own experiments with the effects color combinations could have. Her prints after ukiyo-e, show mainly women in everyday tasks; one of the most prominent works from her series being ‘’Woman Bathing’’ (below). Claude Monet’s painting ‘’ Madame Monet en costume Japonais’’ depicts a European woman in traditional Japanese clothing surrounded by fans. Whether this painting could be considered his celebration of Asian art or, on the contrary, a mocking image of Paris, obsession with Japanese art at that time, remains a question of debate.

Monet was an avid admirer of Hokusai and had many of his prints in his possession. There is even a speculation that Hokusai’s focus on flowers may have inspired Monet to use water lilies as a model for painting. Paul Gauguin, a notable artist whose works are also placed within impressionism and post-impressionism, was known for his vast travels and for his admiration for native and tribal arts of many cultures. Influence of ukiyo-e on his work is most notable in the absence of shadows, which is a trait that the Japanese woodblocks also share.

Only Paul Gauguin sidestepped the then-current practice of lithography and adopted Japanese woodcut technique to the abstract expression of his forward-looking art. Henri de Toulouse-Lautrec is also considered to be inspired by ukiyo-e to some degree. He was known to create commercial form of art, such as posters, just as frequently as finer works. The influence of ukiyo-e is mainly notable in these commercial works; he borrowed the style of the prominent Japanese artists, such as Utamaro, Hokusai and Harunobu, successfully recreating the ‘’flatness’’, yet dynamism of their woodblock prints.

He also adopted the exaggerated colors, contours and facial expressions found in Kabuki theater prints in order to create his eye-catching posters. Lautrec died at the same age as Van Gogh, as a result of his decadent lifestyle, but he changed the way people viewed poster printing and is considered a pioneer and revolutionist of this craft. The End Of Isolation

Japan has been a subject of fascination ever since its harbors opened to the rest of the world. It could be argued that the end of Japan’s isolation was violent and almost plummeted the country into civil war, it also showed the world the wonders of Japanese art.

In addition, many of the most impressive pieces of European and American art were created only because the artists were inspired by what their Japanese counterparts had to offer. Even today, we are still perplexed by what Japan has to offer.

People enjoy the exotic feel of Japanese art, even their modern artists are often sought out by western consumers. In these modern times, many people enjoy Japanese cinematography, music, and their unique form of animated films called Anime.

Japanese culture and art have integrated themselves into today’s cultural consciousness, but they still retain such a degree of exoticism that they fascinate even today’s youth who are, very often mistakenly, considered by their elders to be ignorant in the ways of art.

It is left to wonder how many people who enjoy the works of impressionist and post-impressionist artist have no idea how their favorite artists were inspired by the art of a secluded and uncommon country.