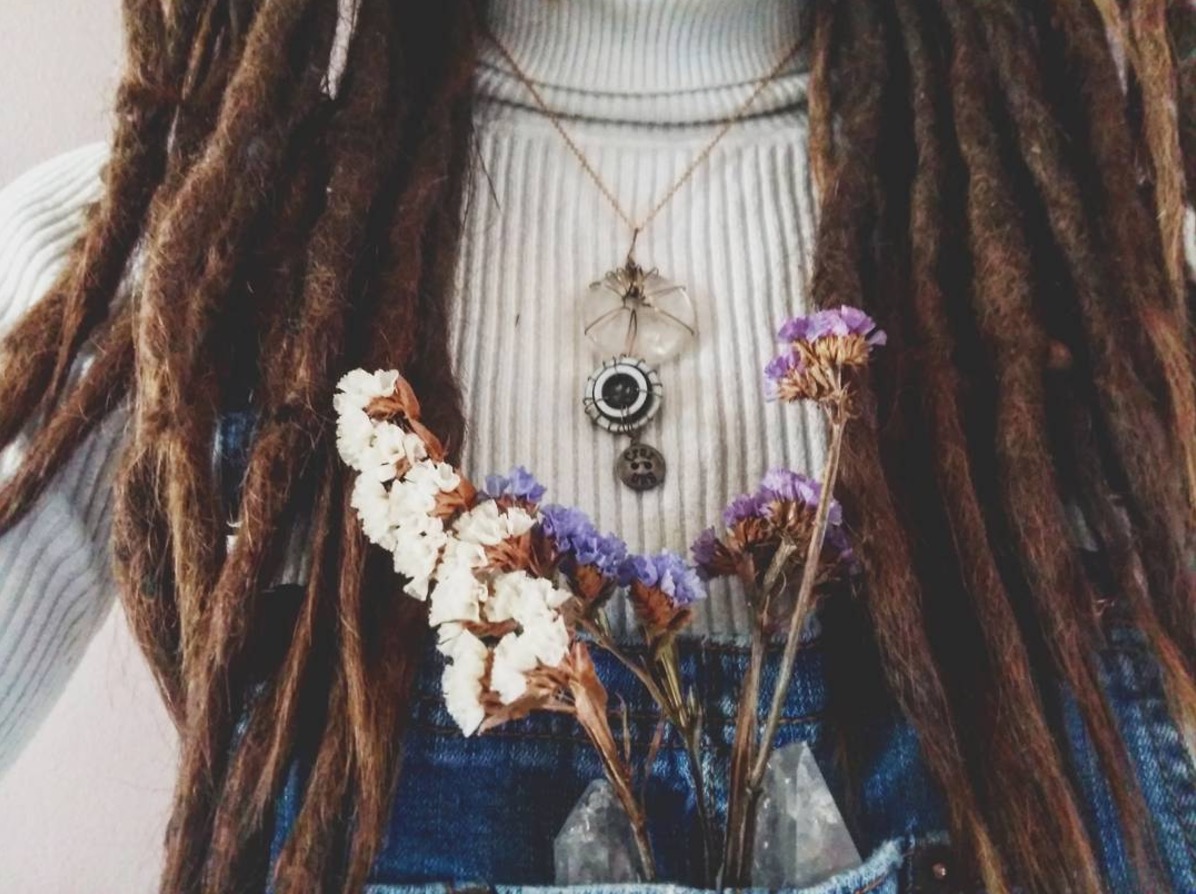 Today I met an artist who goes by the name Oh Miss Bailey, who is a technically a resident of Paris, Ontario, but comes across to me more like a wandering spirit of the cosmos who is brimming with creative energy and radiates light everywhere.

At the tender age of 20, she is someone who clearly doesn’t fit into simple categorization, and probably won’t be found sitting in a cubicle anytime soon. A self-described adventurer, Oh Miss Bailey creates what I’d describe loosely as playful “psychedelic” paintings done in watercolor and mixed media that are both down-to-earth and cosmic at the same time.

Actually, she creates other things too, like little charms made from found or discarded objects, or various other styles of art (see her Instagram for more), but what I saw first was the slightly trippy stuff.

I first noticed Oh Miss Bailey’s art when I was getting my mountain bike fixed at this repair shop called Wheels and Deals in downtown Paris. The artwork seemed a little out of place amongst all the bike gear, so it immediately got my attention while also being a bit puzzling as to why it was even there in the first place.

I think a sign that art has something special going for it is that you can see it and instantly feel a connection to it. Everything that I saw was of a fairly collectible size – around as big as your average piece of 8.5″ x 11″ paper, or smaller.

I didn’t see any mammoth canvases lying around. Instead, she had small sized, colorful works that were placed here and there, hiding behind bike tires and such. I purchased one of her works with some tentacles morphing into a hot air balloon as well as one of her personalized sketchbooks.

You see, Paris, Ontario, is not the kind of town you would immediately associate with ground-breaking and ultra-modern artists who are going to blow your mind with their wild imaginations. It is foremost a quaint little town that has been referred to as one of the prettiest towns in Ontario, not to mention the “Cobblestone Capital of Canada”.

There is a lovely river running through Paris, and one might expect the river or the surrounding natural beauty to be the subject of most of the artwork there. Many of the buildings there are older, and the whole place seems rather dreamy, especially on a pleasant day as it was the other day.

Kayaks and canoes regularly reach Paris as their destination point, and everyone walks around at a relatively slow and relaxed pace. You almost can’t help it. To me, the idea of someone like Oh Miss Bailey making her style of kind of off-the-wall art and selling it around this charming old world town was rather curious to me.

Talking to Oh Miss Bailey in person, I learned a few things about her thoughts behind her art. One is that she is very connected to music, and many of her works are inspired by a particular artist, or song.

Music is a big part of what inspires her, it seems. I think she said Edward Sharpe and the Magnetic Zeroes was an inspiration for at least one piece, for instance, but we didn’t go into great depth on this topic.

That said, I’m sure there are countless musical influences that seep into her artistic musings and I feel like I can see that in her work. In turn, her work has a musical quality about it.

She also mentioned she sometimes sneaks in those F-holes you find on violins into her work. Of course right now I can’t seem to find any of her works that have them in it, but I’m pretty sure I saw a few of these symbols here and there.

Another thing Oh Miss Bailey mentioned is that she thinks that realism is somewhat over-rated, in that she doesn’t feel compelled to paint in a purely realistic manner herself. She said that when she draws or paints someone or something, she depicts not exactly what she sees, but rather *how* she sees it.

This is not unlike the way the expressionists did things. For Oh Miss Bailey, it’s not about 100% photo-realistic accuracy. That’s ok, since there are numerous artists around nowadays who excel at this type of hyper-real rendering style.

I’d say that her renderings fall somewhere between caricatures and cartoons, with most of her work being fairly kaleidoscopic and ignoring of the basic laws of physics.

Similarly to music, Oh Miss Bailey mentioned that poetry is connected to her through her sister, and this is another quality I can see in her work – it has a poetic and free-spirited feel to it.

You might be able to argue that all artwork is poetic in its own way, but I think there is something different about the work of artists who actually take poetry to heart (eg.

actively read or write it), in that it adds an extra emotional dimension to the work, and makes each work almost like a window to a tiny world. To me, poetry or compelling written work does this.

It creates a window for a viewer or reader to see through into someplace else. Her work definitely has that effect of luring you down the rabbit hole and providing a portal into another world.

A few of the themes that I can see in Oh Miss Bailey’s work include that of travel, tentacles, and umm.. hot air balloons. Not sure what they mean but they do recur. Also, lots of faces.

I find that her use of watercolor adds a very whimsical quality to the work, and giving things a light touch. The cool thing about watercolor is that it is very useful for hinting at things, and creating atmosphere.

I think that she definitely has a knack for small scale works – like pages out of a sketchbook. In fact, this might even be the case – I don’t know.

The smaller scale of her work, to me, makes a few different statements. One is that this is work she can do while being out and about, allowing her to draw influence from her surroundings.

I also think this work emphasizes the importance of smaller things, and is in some way a rejection of following certain rules (this is pure conjecture on my part). That is to say, artwork doesn’t have to be huge to have an impact.

The linework of much of her work makes me think of animators, because the lines seem to have a life of their own, and for some reason I think of Chuck Jones sitting down to draw something, minus the cartoon violence he might typically add.

Speaking of violence, I get an opposite vibe from Oh Miss Bailey’s work. It is very friendly, peaceful, and suggests the tranquil side of nature. This may have something to do with her currently living in Paris, I’d wager, were I a betting man.

If I had to decide if Oh Miss Bailey’s work was good or evil, I’d say its definitely on the side of good, with maybe a bit of mischief thrown in just because. Even the tentacles don’t seem very threatening to me, and tentacles, if you’ve ever been grabbed by one, can be quite terrifying!

Some of her pieces do seem a bit dark, in some ways, but I think there is still something quite buoyant about them. As mentioned earlier, she does more than just paint. She is also a creator of jewelry, using small found objects.

One more thing I learned by talking to Oh Miss Bailey is that she’s not short on ideas, and she’s determined to get herself out there as an artist. That means, there’s probably more coming, so you may want to connect with her.

With a firm grasp on social media, she’s not too hard to find if you search her up. You can quickly connect with her via her Facebook page or her Instagram.

If you like the pieces used in this article, most of her work I believe is available as prints. Thanks for reading!