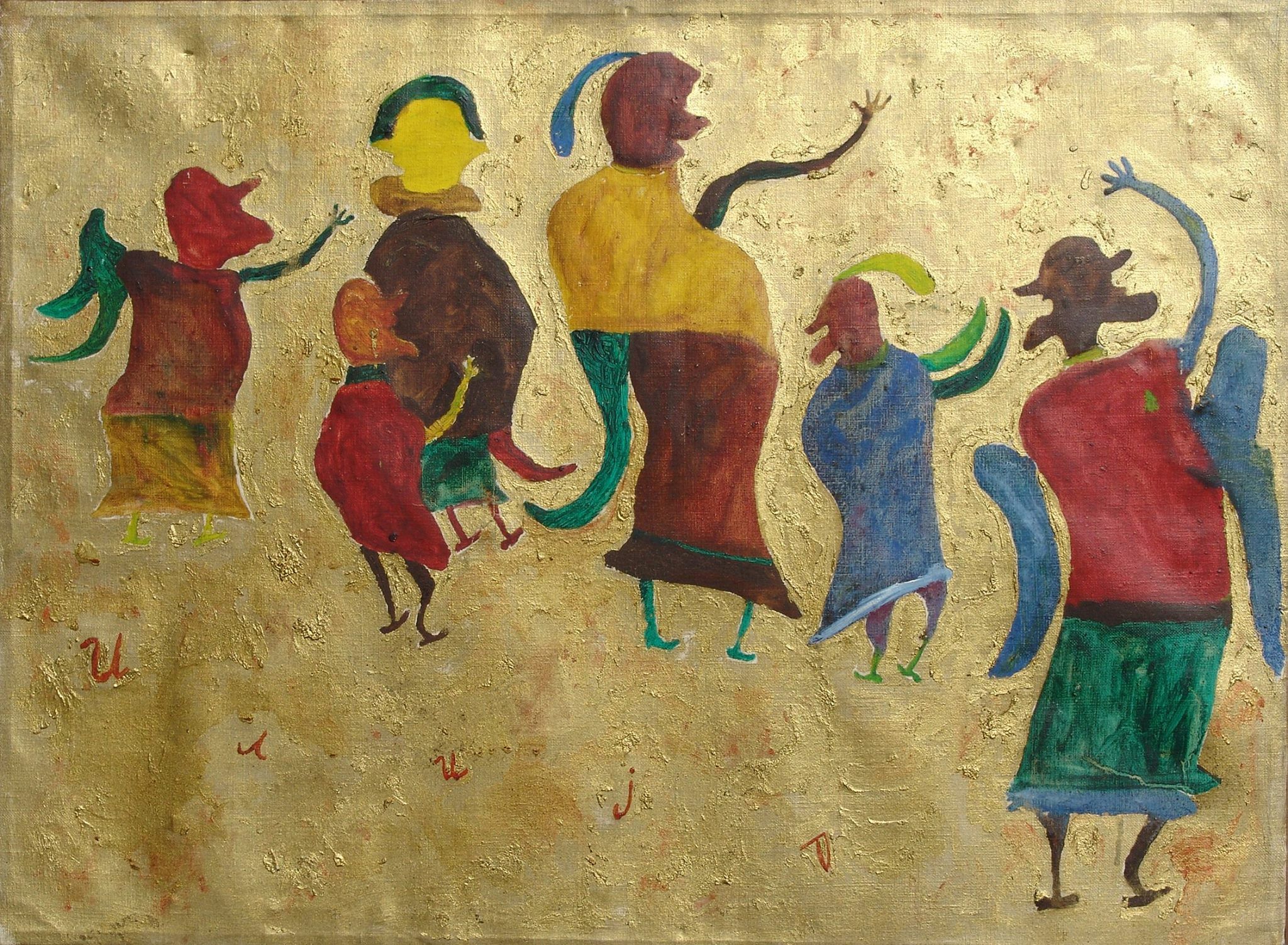 It’s hard to understand life, but it’s easy to paint. You only need to start, afterward it goes with ease. When a picture is finished, you see everything in it is vivid as it is in life, and you realize that every truth has two faces. – Ilija Basicevic Bosilj

Nothing is predestined and impossible in the world of art.

So it wasn’t predetermined and was completely possible for someone who didn’t have the intention of becoming an artist to become one in his old age and to be remembered for being an artist more than for anything else he did in his life.

The richness of spirit and imagination is the essential condition for art to arise and so the opus of Ilija Basicevic is unique and undeniable proof of it. 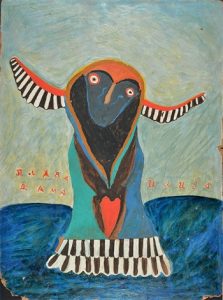 Ilija Basicevic Bosilj (in Serbian – Ilija Bašičević) was a Serbian painter, a classic example of Serbian naive and outsider art. He was born in 1895 in Sid, Serbia (then Austria-Hungary), and died in 1972, also in Sid.

His parents were respected peasants. He was born as the youngest, the ninth child in the family. He finished four grades of primary school (for comparison, nowadays, pupils are required to finish at least eight).

When finished with the education, he started helping his parents in fields and on the farm. He was 19 years old when World War I began. Despite his young age and inexperience, he wanted to go to the army – to see the world (Galicia, Carpathian Mountains etc.).

The war was over and he didn’t go to the army and didn’t see the world. When World War II started, he was married with children. They had to escape to save their lives.

They were in a labor camp near Vienna. There Ilija’s health condition got worse, he got ill of tuberculosis. When the war was over, the authorities took the fields from Basicevic family.

Bad health condition and loss of his fields lead him in a situation where he had a lot of free time that he needed to fulfill somehow. So, he started painting. 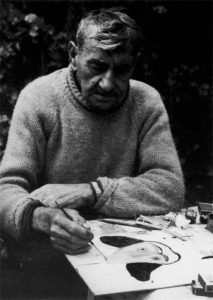 The beginnings and The Bosilj Affair

He made his first painting in 1957 when he was 62 years old. He painted an icon of Saints Cosmas and Damian.

His son Dimitrije, respectable art historian and artist himself, later known as Mangelos, didn’t approve his work at first. He even tore up his father’s first paintings.

But it didn’t discourage Ilija. He was persistent and continued to paint. In the beginning he was creating drawings and gouaches and later started painting on different materials (wood, glass, canvas, cardboard etc.).

Dimitrije showed these paintings to his colleagues. Because he wanted an objective opinion, he didn’t tell them whose work was that. They were delighted with a new artist in the world of naive art and decided to invite him to the exhibition.

In order to avoid idle gossip because his son was connected to art, he chose not to publish his name and biography. He was exhibiting under the pseudonym Bosilj.

But, journalists uncovered who stood behind the pseudonym. It was claimed that the author of the paintings was not actually Ilija but Dimitrije and that they did that to make a profit because naive art was then in expansion.

It was named Affair Bosilj and culminated in 1965. In 1965 in Zagreb, he had to paint in front of eminent commission to prove that he is the author of the paintings.

As soon as he began painting, it was clear that they were wrong, that he was unjustly accused. He received apologies from both journalists and respected artists. As a result of this affair, galleries all over Yugoslavia didn’t want to exhibit his works.

But the world recognized this unique artist and appreciated his uniqueness, so his paintings went all around the globe, from Paris, Rome, Milan, Amsterdam, Munich, Dortmund, to New York, Mexico City, and Japan. 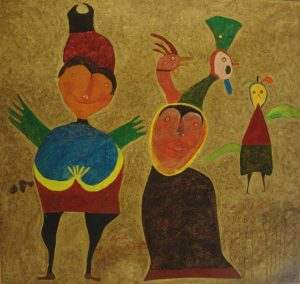 While most naive artists paint social, usually rural life and the environment around them with sublime simplicity, Ilija takes us in his inner world.

Ilija’s opus can be classified in several major thematic units. Most numerous are paintings with motifs from the Bible, mainly from The Old Testament. 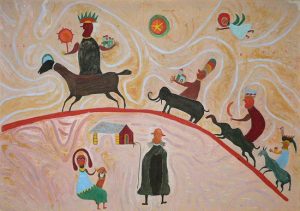 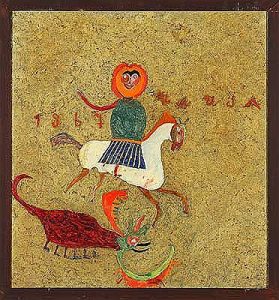 Then there is a series of paintings inspired by Serbian folk epic poems, myths and legends. Next comes cycle Iliad (meaning “the world according to Ilija”) that is named after the artist – Ilija, not after Homer’s epic poem with the same name.

It represents his clash with human stupidity, duplicity and hypocrisy. Furthermore, there is a cycle with numerous paintings of animals, especially peacocks, but there are also unreal creatures with human bodies and animal heads, and reverse – with animal bodies and human heads.

In the end comes a cycle connected to flying and astrological creatures. 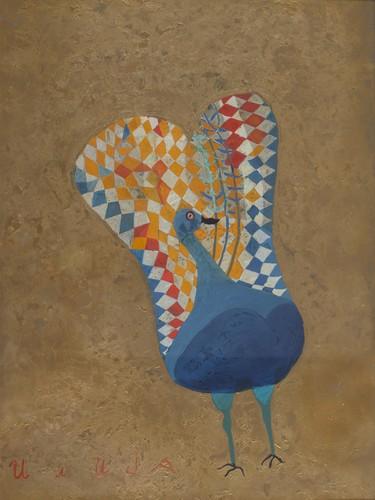 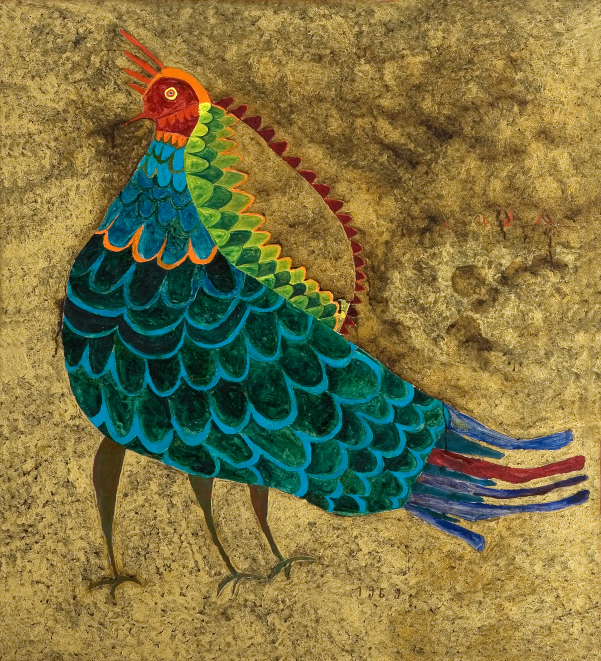 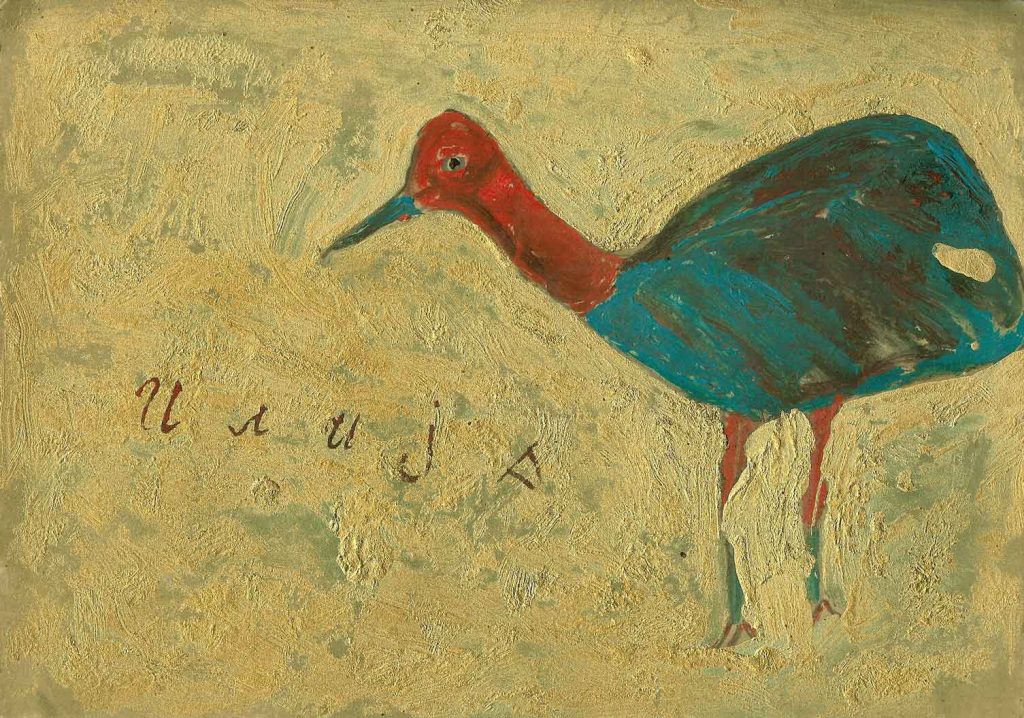 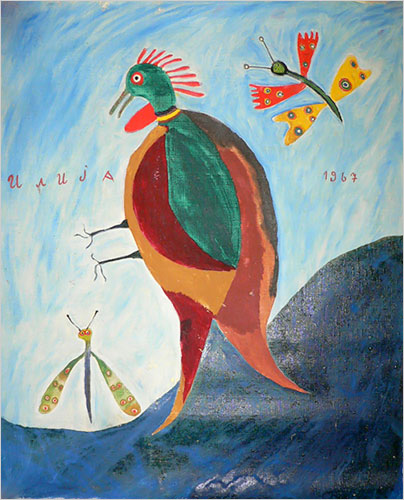 Complex allegory is the main characteristic of Bosilj’s paintings. This allegory is best represented through two-faced and duplicity of the figures, both animal and human. It represents his understanding of the world and living creatures.

The artist himself used to tell that all creatures created by God have two faces, they show one in front of the outside world, while the second one is being hidden deep inside them.

When it comes to interpretation of his work, titles that he gave to his paintings are of a huge help, because we’re never sure what is it we are looking at, is it angel or cosmonaut, wild animal or apocalyptic creature.

Rich in age, but poor in health, two years before his death, he donated his painting to his hometown, Sid. In 1970 Museum of Naive Art Ilijanum was founded.

It is still opened and there we can see around 300 Ilija’s paintings as well as some paintings of other naive artists. 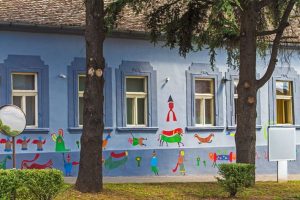 His work was more appreciated in the world than in his homeland.

In 2007, the magazine Raw Vision included Bosilj into 50 most influential art brut artists of the world. His paintings are spread in galleries all over the world.