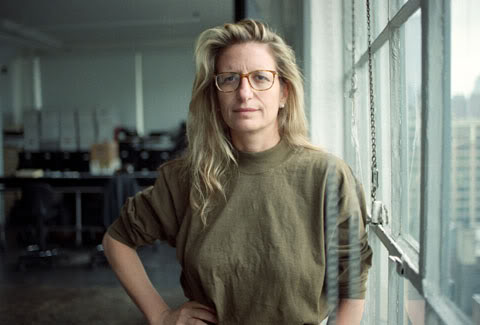 I can never forget the sensation of being at a newsstand and seeing for the first time my photograph transformed into the Rolling Stone cover.

Anne Leibovitz is renowned for her quirky and dramatic iconic portraits of a great variety of celebrities. She has created some of the most controversial and popular images of the last 40 years. Iconic figures spanning creative, celebrity and intellectual circles have sought to work with Leibovitz in admiration of her interpretative perspective.

Possessing an ability to celebrate and critique mainstream culture in equal measure, her signature style is crisp and well lighted. She is influenced by the documentary tradition, but also comfortable with theatrical staging. The blending of fine art and pop contexts lends her work a unique cultural cachet. Anna-Lou Leibovitz was born on October, 2, in 1949, in Connecticut and grew up in an idyllic, middle-class family. Her parents were of Jewish and Eastern Europe descent; the mother, Marilyn, was a modern dance instructor who instilled in little Anne a passion for art, music and dancing, and the father Sam had a military career, as a lieutenant colonel in the US Air Force.

The Leibovitz moved around frequently and her family credits her success as a photographer to growing up seeing the world through a car window.

In 1967, Annie Leibovitz attended the San Francisco Art Institute, began studying painting with the main intention to become an art teacher. Meanwhile, in her second semester she took a photography workshop, and became engrossed in medium.

The photography workshop was based on the ideas of famous modern photographers, especially Henri Cartier-Bresson and Robert Frank. Both photographers were known for their documentary style, their engagement with quotidian and famous subjects, and both of them were influential for Liebovitz. In 1970, while still in school Annie showed Jann Wenner, the creator of Rolling Stone magazine, her photograph of a poet Allen Ginsberg smoking pot at an anti-Vietnam march. She was immediately hired to be a contributing photographer and her image was used as the cover for the magazine.

At the time, Rolling Stone was a new, experimental, magazine focused on the counterculture that emerged from the bohemian thinking of the late 1950s and rock music. Three years later, Leibovitz had become the chief photographer for the Rolling Stone (by the time she was 23 years old) and had been given absolute artistic freedom to experiment with her work. She directed her energies toward a unique presentation of the major personalities of contemporary rock music.

She made some of the publication’s most iconic images, including the most influential musicians of the 20th century.

After having building her reputation as a skillful rock’n’roll photographer, in 1975 she documented the Rolling Stones’ six-month North American concert tour during which she shot several widely reproduced photographs of lead singer Mick Jagger and guitarist Keith Richards.

Mick Jagger (Buffalo, NY, 1975), captures one of these moments and has become an emblematic image from the historic tour. The black and white photo depicts Jagger standing in an elevator wearing a white robe and turbaned towel on his head. The image was taken immediately after one of his last performances; Mick stares directly at the camera, reflecting exhaustion that comes with performing and partying every night.

This piece along with others from this very tour has come to show how Annie approached her subjects, early in her career. She would spend days, weeks, or even a year with her subject in order to get familiar and revealing shots.

She was so successful at integrating herself into new environments that subject eventually became comfortable with her presence, even forgetting she was there. The result of these immersive interactions led to drug abuse problems; she became addicted to cocaine.

Annie enjoyed the collaborative and social environment by the magazine; it was a mix of personalities that led to some original work. She particularly enjoyed working with the legendary journalist and creator of gonzo journalism, Hunter S.

Thompson, whose erratic and fast paced lifestyle became legendary as his writing. The two shared a kindred spirit and affinity for hard partying.

Working on assignment for Rolling Stone with Hunter S. Thompson, Leibovitz captured the moment when president Nixon left the White House for the last time. The expressive photos (Untitled; Guards rolling up carpet after Nixon, 1974) captured an extraordinary documented event in American history in a novel way. Leibovitz herself attributed this to her ability to capture moments either before or after‘ the moment’ .It was the moment after the helicopter carrying Nixon had taken off, and the three men are packing up the last vestiges of ceremony, the carpet where Nixon would appear as president for the last time.

It is both mundane and theatrical; the guards could be stagehands or porters, but the presence of the carpet and the White House setting evokes the pageantry of the State.

Her work for this very magazine introduced her to some of the most famous creative figures of the time. Perhaps her most famous work from this period is a portrait of John Lennon and his wife Yoko Ono (Yoko Ono; John Lennon, 1980). She depicts the couple in an intimate embrace with a naked Lennon curled around fully clothed Ono. Annie requested them to be pose nude together; Ono refused to remove her clothes, but Lennon did not.

The clash between clothed woman and naked man subverts the conventional art historical canon which often exalts the nude female form. The image was taken a few hours before Lennon was shot outside his Upper West Side apartment by crazed fan Mark David Chapman.

It was first published on the cover of Rolling Stone in 1981, and would become iconic for its timing and the manner in which it immortalized the couple’s devotion to each other.

The year 1983; it was a huge risk for the famous rock photographer to move to a glossy mainstream magazine, Vanity Fair. During her 13 years tenure at the Rolling Stone her work interfered with her extensive drug use; she had overdosed twice and was rumoured to have hawked her photograph equipment to pay for cocaine.

After some time in rehabilitation, clear and good, Annie was ready to start a new chapter in her career. The timing was right; Annie became the first magazine’s chief photographer. Vanity Fair envisioned Leibovitz as a continuation of grand tradition of portraiture and also gave her full artistic freedom.

Unlike Rolling Stone, budgets at Vanity Fair were not a problem, and Leibovitz could be more experimental. Her portraiture work transitioned from simple black and white images to extravagant, rich colour staged production full of drama.

In 1987, Annie Leibovitz captured the Pop and graffiti artist Keith Haring naked and squatting on top of a coffee table with a surprised expression of his face; his entire body was painted, camouflaging him against the mural he painted (on the Salvation Army furniture and walls of the room). In 1989, Annie met Susan Sontag, a critic, writer and political activist, and the two developed a long lasting intimate relationship. They were partners in every sense. The intellectual writer was 16 years older than pop culture photographer, but the two complement each other’s strengths; Susan Sontag, a celebrated critic of media and photography, introduced new dimension to Leibovitz’s work, while Leibovitz introduced Sontag to the world of celebrity.

Annie admired Sontag despite the fact that she was interested in her work, but criticized it. Sontag could be tough on her at times, but Leibovitz attributes Sontag with helping her discover and seriousness and intellect in her photographs. When actress Demi Moore was featured on the cover of Vanity Fair, in 1991, Leibovitz’s staged portraiture earned a reputation as being intentionally provocative. Wearing only a 33-carat diamond earrings and a ring, the seven months pregnant star stands in profile, one hand covers her breasts while the other tenderly cups her pregnant belly; the star proudly displays her naked body. The cover image was seen as an unprecedented provocation from a mainstream publication the Culture Wars. When the issue was released, the backlash and controversy was immediate; the celebrity on a cover of a magazine, completely naked was considered obscene and grotesque.

The photograph started a nation-wide discussion on propriety, femininity, and what it meant to be a good mother. Critics deeming Moore unfit for motherhood for posing nude, while advocates celebrated her celebration of the natural state of pregnancy.

However, in the same year, Leibovitz had her first museum exhibition and became the first woman and second living photographer to show at the National Portrait Gallery in Washington D.C. A companion book Photographs: Annie Liebovitz 1970-1990 was published in 1991. In 1992-1994, Annie traveled with Susan Sontag to Sarajevo to document Bosnia’s bloody war. The image “Fallen bicycle of teenage boy just killed by a sniper, 1994”, depicts the aftermath of the death of an innocent boy trapped in the midst of the conflict.

The picture of the bicycle and the blood was taken just after the boy on the bike had been hit by mortar that came down in front of the Leibovitz’s car. They put him in the car, but the boy died on the way to the hospital.

Annie documented the boy’s traumatic final moments; his absence is an unsettling reminder of the fragility of life. The early 2000s brought transformative shifts for Leibovitz. In 2001, at the age of 51, she gave birth to her first daughter, Sarah. During this time, Susan Sontag had been battling acute leukemia off and on, but in 2004, she learned that it had returned.

The same year Sontag succumbed to her illness a few days after Christmas. In addition, Annie’s father passed away from lung cancer a few weeks after Susan Sontag. Three years later, Leibovitz’s mother died, too.

Leibovitz was notoriously bad at managing money and her poor financial decisions culminated during the period of her mother’s death; she found herself $24 million dollars in debt. In order to pay the debt, she secured a large loan, using the right to her images as collateral.

When she was unable to pay back the loan, she was sued, and her work was jeopardized. After a legal battle, in which she filed for bankruptcy and sold numerous artworks and properties, eventually, she was able to pay the debt and regain the rights to her work.

Despite these difficulties, this period was also full of incredible highs for Leibovitz. In 2000, she was deemed a Living Legend by the Library on Congress and awarded The Royal Photographic Society’s Centenary Medal and Honorary Fellowship. In 2009, Leibovitz began working on a personal project, photographing objects and places that were meaningful to her; the image were collected in the book named Pilgrimage, published in 2011.

In 2005, with the help of a surrogate, she was welcomed twin girls, whom she named Sam and Susan in honour of her father and her lover.

In 1995, Vanity Fair started the tradition of devoting its March issue to celebrating the stars deemed to have made an impact in film the previous year; Annie has photographed each issue. The grouping changes annually but Annie’s composition are strikingly similar; the cover images speak to glamour and elegance, but also the interchangeability and ephemerality of the industry and the careers of the subjects.

The relevance of the work of art is often not about what is reveals or exposes about the subject, but what it reveals about the cultural moment in which it was created.

Over the past four decades of her career, Annie Leibovitz has become one of the world’s best known portrait photographer, now rivaling the legacies of forebears like David Bailey and Richard Avedon.

A master of capturing popular culture icons in dramatic and innovative ways, Annie has become just as famous as the people she photographs.

1 thought on “Annie Leibovitz – History In The Making”