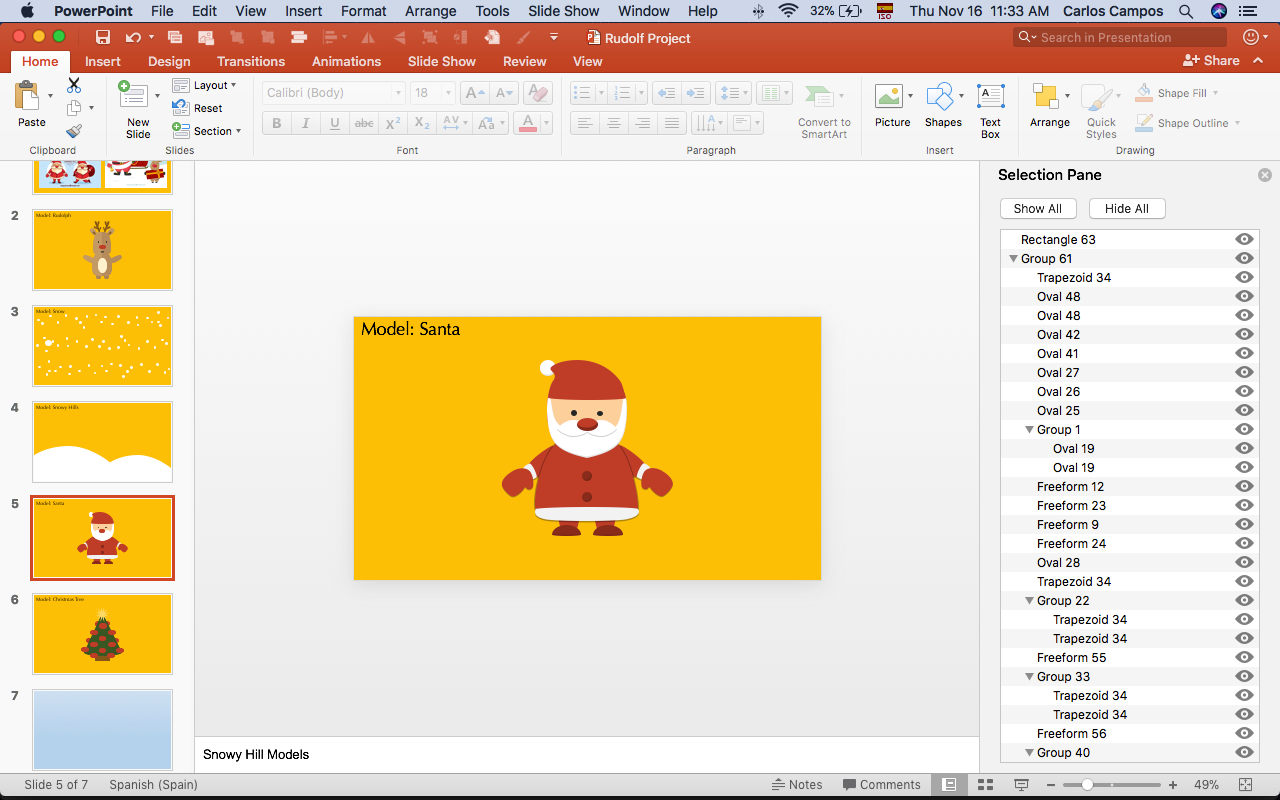 Today I’m chatting with Carlos Campos, professional freelancer and animator of many, many projects about what you might call his “workflow” when it comes to designing an kids animation project for a client using Powerpoint to start things off.

In this case, that client is…well, technically it’s me, since I commissioned it, although we are more like buddies in this animated endeavour.

What’s going on is that Carlos and I are working on a new animation channel for Youtube called Kindertunes featuring children’s nursery rhyme songs, which requires us to come up with animations of various lengths to provide content for the channel.

I wanted to talk to him about how he gets his inspiration going, and he gave me the lowdown on these first crucial stages of planning. Now I want to share all that with you! Carlos is a fan of coming up with what you might call his “storyboard” or “idea chart” in Powerpoint, where he can design the characters who will appear in the animation, and then do some editing of those characters to work on their aesthetic looks and expressions.

He can also design background elements and play with those as well. This would essentially be the first step in what will become the animation that will be used for the video.

So it’s an important step to take, but it can also be one of the most fun because it involves creating a lot of the visual elements of your cartoon, or animation and doing a lot of brainstorming.

For instance, our new video is for a Christmas song (as Christmas is around the corner), and here’s his version of Santa Claus. I don’t know a whole lot about Powerpoint myself, so I’ll let Carlos jump in here and say a few things about what he’s up to in this first stage of planning your animation.

I will also jump in and ask a few questions to get more info.

Carlos: Alright! So, I took a bunch of snapshots of my “workspace” you could say. This is basically showing what the project files look like. It shows the first and second stages of the creative process.

First comes what I call the “mood board”. I know some people call it different names. I just go with that, because I like it. It’s pretty much any external source of inspiration.

You include it within your space (be it physical or digital) and keep going back to it while designing. It’s a lot of fun, ’cause you start connecting the dots, so to speak, and create different relationships between the chosen objects.

So if I’m creating, let’s say, a logo, for a company called Evil Apples Entertainment (nice name right?), I’ll take into account whatever the client wishes to include in the design and see how we can work it in.

In some cases, I might advise them to drop certain elements or include certain others, maybe just change a thing or two about the ones they mentioned.

Dave: Can we take a look?

Carlos: Yeah! So this is the mood or idea board for this particular project. The song will be “Rudolph the Red-Nosed Reindeer” – a Christmas classic.

So the animation, being mainly for kids but also adults too, has got to be fun, colourful and festive! Dave: Looks cool! Looks like you’re working with a few templates to get some ideas.

Carlos: Thanks, that’s right. I take a look at those items and see what vector shapes might help me better represent the style and ideas behind the project at hand.

In this case, since the graphics in the previous video lacked an outline (referring to our Itsy Bitsy Spider video), I’ll try to steer away from using them here, to keep the graphic theme consistent.

We want to have a visually similar look from the last video to this one, I think. It will make it all look more consistent. We’re basically coming up with our style of how the cartoons or animations will look.

Next, I look at icons, logos or vectors already on the web and maybe inspiration outside of the target field.

So, not just Christmas maybe but also actual pictures of deer to see if there’s any anatomical features that any drawing may be missing (e.g. spots, a tail, more realistic antlers…)

Then see if I wanna include that. Next I go to creating shapes, editing them, etc. I’ll show you that now. The idea is to make them “easier” to edit.

Here’s a Christmas tree that will be part of the video. As you can see, certain shapes repeat. Carlos: Yep, a few different elements here. I am just kind of working on the fly a little bit. Some people do it in a way that’s more rough-and-ready.

Some are super nit picky.

I consider myself being sort of in-between. Hahaha. But yeah, I mean, the creative part is not something you can teach or reproduce just by having the knowledge.

Dave: All part of the workflow I guess. Getting some ideas going. No need to be super picky right away.

Carlos Campos: It does help to be somewhat organized. Otherwise it’s chaos. Lol.

Dave: Never hurts to have a plan eh?

Carlos: Exactly. Anyway, as you can see in the “Model: Rudolph (elements)” slide, I create a bunch of shapes and then put them together to create the actual model which will then be animated.

So if I want to make the arm pivot or move or something, I have to keep it on a separate “layer”, so to speak. But yeah, even if they might resemble elements from my mood board, I have to come up with all sorts of crazy ways to make them work on my project. Carlos: Also, on that one you can see how I name every element to be able to track it down when there’s tons of shapes and pictures all over the place. It’s not rocket science, but it does take patience, creativity, organization…It can be very time-consuming, too, haha, but I like it.

So in the snow slides you can see I get to select the elements, edit them (make them bigger, taller, larger, change colors, shadows, dimension, glow, position…), animate them…There’s the Santa model which is more recent.

I made that yesterday. Dave: So this is all in Powerpoint?

Carlos: Yes. So far, it’s all on PowerPoint. And for the tree, I wanted it to have some cool, fun decorations to avoid it from looking too traditional.

I thought that a funny way to generate interest with the decoration would be to make the connection between Rudolph’s nose, Santa’s nose (they’re the exact same), and the Christmas tree spheres.

Dave: Well, I see you’re coming up with a lot of ideas at this stage in the process. Nothing is moving yet, but I can see how it will soon enough.

Carlos: Won’t be long! I really hope this can give you a better perspective of how I work and what goes into the designs and creation of the videos!

Dave: Once you’ve got enough ideas, then what?

Carlos: Yup. Once these ideas are ok’d, I move on and create the settings and start the animating. Add music, then edit the video file…it’s not necessarily a long process.

Dave: Cool. So what do you call this stage in the process…character development? Storyboarding? Idea board? Is there a name that covers what this is?

Carlos: Storyboarding might be a good way to put it, but there’s no plot progression yet. So character development might be the best term. I just consider this my idea board and I work off of it for now.

I mean, to me, it’s just sort of drafting I guess. I know it’s not that actually, haha, I guess I never give it too much thought, I just do it.

Dave: Well I feel like I’m learning a lot here, man, thank you! Hopefully my readers on the site enjoy this as well.

Carlos: Cool! We’ll have to document the process as we go along. This is just Part 1. We’ll come back with the next step in the process, and I’ll share that as well.

Dave: Sounds good. I’ll leave people with our first video so they can see what we’ve been up to lately. See y’all next time!

Read part 2 of our animation tutorial with Carlos Campos