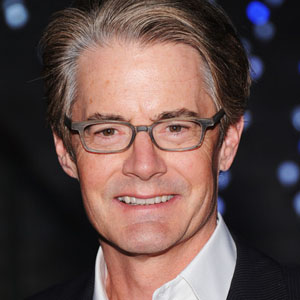 Kyle MacLachlan is an American actor born February 22, 1959. Quite possibly best known for his role as the mysterious, yet welcoming agent Special Agent Dale Cooper in in Twin Peaks, Kyle MacLachlan has enjoyed a successful acting career spanning decades. His career has been spread across television, movies, theatre, and even videos games. It may be a surprise for most to learn that MacLachlan voiced Donald Love in Grand Theft Auto III (2001). When asked about MacLachlan’s role in Twin Peaks, Lynch has commented that “Kyle plays innocents who are interested in the mysteries of life.

He’s the person you trust enough to go into a strange world with.” which is exactly who Special Agent Dale Cooper is and what he does for the both the audience and the town folk of Twin Peaks. In addition to Twin Peaks, he’s worked with David Lynch on other projects as Jeffrey Beaumont in Blue Velvet and as Paul Atreides in Dune.

Apart from Television, MachLachan has been involved in a number of Hollywood movies including: The Doors, a 1991 biopic film about the band; in the 1994 film adaptation of The Flintstones he played Clifford Vandercave; he played Zach Carey in Showgirls (1995); Claudius in Almereyda’s Hamlet 2000; and most recently on the big screen he played Riley’s Dad in Pixar’s 2015 film, Inside Out.

Despite his success on the screen, MacLachan has remained somewhat active in theatre. Notable roles include Damis in Tartuffe at the Empty Space Theatre in 1983, Terrence Beebe in The Palace of Amateurs at the Minetta Lane Theatre in 1988, Jack in On An Average Day at the Harold Pinter Theatre in 2002, and Aston in The Caretaker at the American Airlines Theatre in 2003.

MacLachan was introduced to acting at a young age by his mother. She was the director of a youth theatre program in Yakima which she had helped to set up. Additionally, he learned piano and became to study classical singing. And throughout his teenage years, he was involved in class plays and school musicals.

While he may be a fan favourite, his work has caught positive attention from critics and he has received a number of awards and nominations. Mostly notably he won a Golden Globe Award for Best Actor – Television Series Drama for his role as Special Agent Dale Cooper.

As well he’s received nominations for two Emmy Awards (also for his work on Twin Peaks).

Outside of acting, MacLachlan leads a fulfilling life with his wife Desiree Gruber. The two were married in 2002 and have a son, Callum Lyon MacLachlan who was born July 25th, 2008. MacLachlan was born and raised in Yakima, Washington and is the eldest of his brothers (Craig MacLachlan and Kent MacLachan). MacLachlan maintains a website for his family’s two dogs: a mixed Chihuahua-Yorkie breed and a Jack Russel terrier called mookieandsam.com.

In addition to the website, the dogs have their own personal Youtube channel with the username FullPic.

In addition to this, he owns a vineyard and winery with business partner Eric Dunham. His winery is named ‘Pursued by Bear’ which is in reference to stage directions in Shakespeare’s The Winter Take, “Exit, pursued by bear” and was suggested to him one evening by Fred Savage.

MacLachan’s reason for this business venture was for his well known love of wine and to spend more time with his recently retired father. Before acting, MacLachlan attended the University of Washington and in 1982 graduated with a bachelors degree in Fine Arts with a focus on acting.

Presently, he has two places of residence: one in Los Angeles, California and one in New York City, New York.

Most excitingly, you can see Kyle MacLachlan reprise his role of Dale Cooper in the new season of Twin Peaks.(2017)