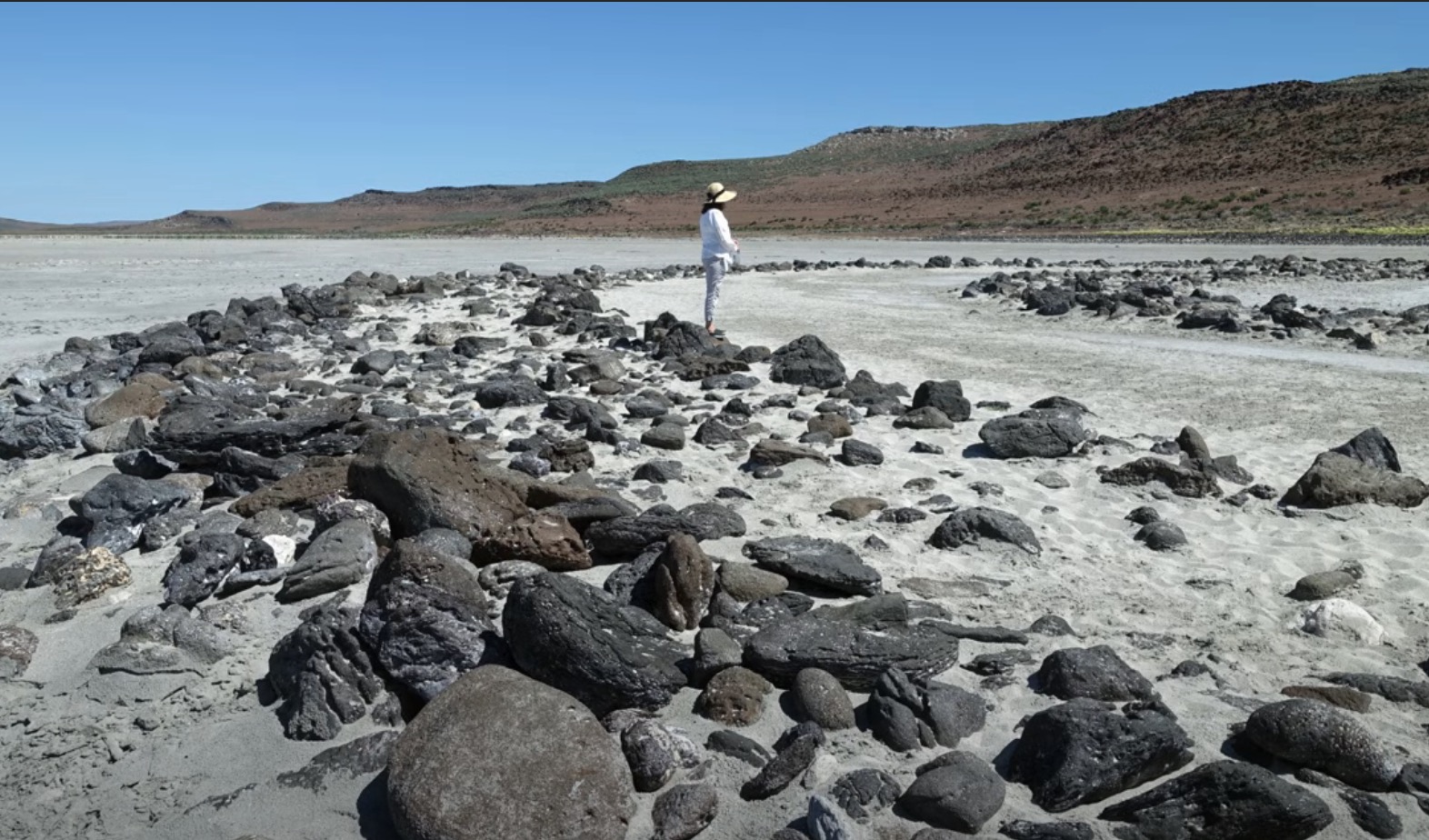 Installation art is a type of modern artistic sculpture, that presents the idea of using three-dimensional things in some sort of thought-provoking way.

Art installations are mostly presented in art galleries, museums, but also sometimes in public spaces in cities as well as in nature.

The “cross-over” of installation art from the gallery space into the outside world, or the natural world, could be considered inevitable, although this by no means to say the results have been predictable.

Created by Robert Smithson in 1970, Spiral Jetty, at a glance, might be mistaken for a natural phenomenon, if you happened to fly over it in a helicopter.

It was, however, intentionally formed, and is located in an area of Utah, still there to this day.

Unlike Spiral Jetty, which has been there for decades, installation artworks created outside, particularly nature-based installations like this one, are made to last for a temporary period, and disperse at some point either by manmade design to do so, or naturally.

Installation artworks also sometimes can be movable, transferred from one place to another, although generally they are not as easy to move around as regular canvas-based artworks.

Because of their somewhat unlimited potential in terms of scope, the popularity of installation art featured outdoors, has only increased.

As the modern artist has taken to focusing their creative endeavours on the possibilities of what can happen when art goes “outside”, new and intriguing innuendos begin to bubble up from the wellspring of the human mind.

Art installations, in the form that we understand them today, started to become part of modern art between the 1960’s and 1970’s. One of the first installations was created by artist Yves Klein and called “The Void”.

It took place at Iris Clert Gallery in Paris, 1958. This installation was unique at that time because of its minimalistic idiom.

As it happened, the gallery’s outside was painted in the vivid blue color (the specific tone was invented by the author Klein himself, who is often associated with the color blue, oddly enough), an entrance was decorated by fancy same-blue-colored drapes.

Meanwhile, inside of the gallery was empty – Klein removed all things, except one display case and painted it plain white color just before the posh opening.

Here is a video showing the nature of “The Void” by Yves Klein, from 1958.

Klein was known for many unusual installation and even “living” artworks, such as his “living paintbrushes”.

Installation art, overall, is generally thought of as 3-dimensional art, or in other words, art that exists on “interactive” plane of reality we are all familiar with, as 3-d types ourselves.

Other famous installation artists through history have included Joseph Beuys, Michelangelo Pistoletto, Nam June Paik, and Larry Bell.  But today as we continue, we will not be focusing on these intrepid individuals.

As it happens, here now we are going to look at some specifically “climate change” related artists and their works, which you might consider an informal branch of installation art.

This type of artwork reflects on what it means for our human race to exist as we plunge deeper into an increasingly complex industrial world, which has been evolving for centuries now and seems to have reached an impasse in some cities of the world, like New Delhi.

Climate change, as an idea, fear (sometimes referred to as the “climate crisis”), and as much politicized “buzz word” (in some cases as the media likes to hijack these things to their own ends), is essentially, when you strip away the political posturing and mania, a noble and legitimate concern that has arisen in the past 50 years and which has only gotten increasingly more concerning for people that care about our planet, many of them artists who are especially sensitive to such things. 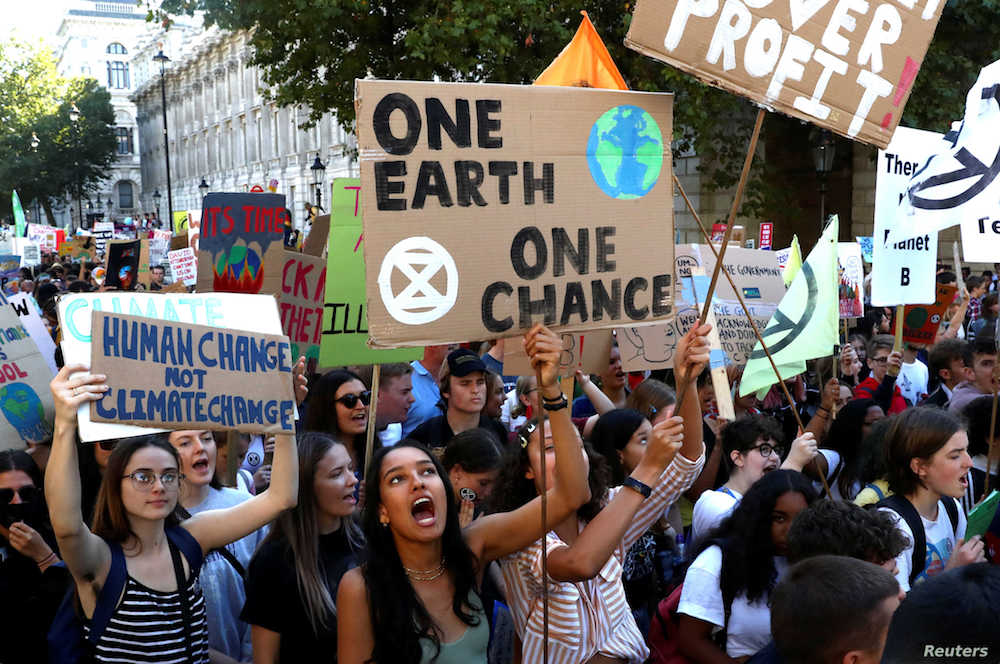 Climate change has inevitably become the topic of many impactful artworks throughout the world, with new movements having been created, and important discussions influenced. All of this artistic ingenuity has brought this topic to new levels of creative output.

Artists all over the globe, who wanted to create artworks, wanted to not only address this issue, but also do their part towards figuring out how to potentially solve this problem, and make others think and act regarding their circumstances.

Sometimes cooperating with designers, architects, and scientists, climate-based creators also wish to how important it is to be open, work together, and find the best solutions possible.

Here are some famous installation artworks focused on climate change you may wish to investigate further.

This installation, called “Lines” was created in 2019, in the small Scottish town surrounded by water – North Uist.

The concept “belongs” (ownership of installed art like this becomes more nebulous) to the Finnish artists Pekka Niittyvirta and Timo Aho, who put white lights in straight lines on two buildings and a fence as a mark, indicating how high the water might rise if sea level will continue to rise in the future, according to the official calculations of scientists.

This project pushes society, and especially, the local community of the North Uist, to discuss what kind of impact does the climate change makes to their town and all other towns, which are in a similar geographical position, surrounded by water.

Danish-Icelandic artist Olafur Eliasson is known for his interest and artworks related to climate change issues. His studio creates exhibitions and art installations for many popular art galleries and museums around the globe.

One of his projects, named “Ice Watch” was presented in London, outside the Tate Modern building at the end of 2018.

Olafur extracted 30 blocks of glacial ice from the waters in Greenland and placed them in public spaces across London, where they had been left for natural melting.

The main idea was to show how the environment influences climate change. According to the author, he wanted to bring pieces of Greenland’s nature to humans, who could have touch and feel those huge pieces of ice, because of the physical contact, the understanding of the issue is “naturally” (pun intended) more effective.

Wayne Binitie, a London based artist, currently a Ph.D. candidate at the Royal College of Art, together with the British Antarctic Survey, created an installation called “Ice Floor”, which took place from 25th November 2019 to 14 February 2020 in Arup, London.

The key to this artwork was in the small pieces of ice, which dated thousands of years old.

The idea here is similar to Eliasson’s, but here the main focus is with the sound, which is released from the pieces of ice cores, during its melting.

This sound is symbolizing the past, or, in other words – what the past can tell about climate change today.

What is unique in this project, that the ice has been extracted from the arctic pole by using a unique scientific method.

British Antarctic Survey scientists collaborated with Wayne Binitie, by providing him main ice materials and were fascinated about the artist’s idea.

Therefore, this is a great example of artists and scientists working hand in hand together for a common purpose.

The artist used light installation made by LEDs to show viewers how it would feel like to be under the 10 feet of water.

It is clear why Roosegaarde has taken a view of water as a key target of his installation: one-fourth of his home country, the Netherlands, is below sea level, therefore rising sea level can damage a large part of the country in the near future, if it continues unchecked.

According to the artist, the viewer can feel how vulnerable life is while living below sea level. Using his artwork, he wanted to spread a clear message to the world – people should be aware of the rising sea level.

Climate change is a sensitive topic these days, but it should be brought up during the public discussions and art is a great way to create those discussions.

Please comment below and let us know what you think.  Have you seen or made any great installation artworks, focused on climate change.