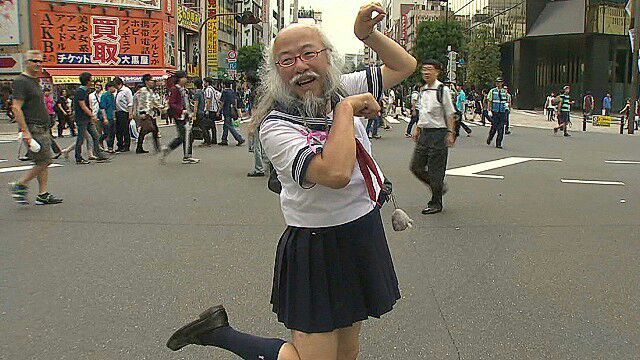 A wide range of youth subcultures have appeared in Japan since World War II, many of them shocking polite sensibilities and subverting mainstream society with behaviors considered self-centered, hedonistic and deviant.

Among the subcultures that attract the most attention, both among the public and in academic circles is the otaku, the notoriously obsessive fans of anime, manga, video games and other forms of Japanese popular culture. 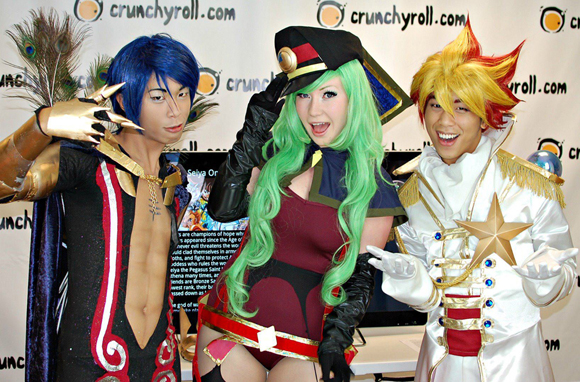 Since their emergence in the 1970’s and 1980’s, otaku have become a major social phenomenon, engendering widespread fascination as well as fear, disapproval and misunderstanding.

The rise of an otaku identity in Japan has inspired films, books, and art movements, that both demonize and celebrate fervent fan subculture.

Otaku is a vernacular term used by amateur manga and anime fans and artists to refer to themselves. Otaku is a polite, almost stiffly formal way of saying “you” in Japanese.

Combining the honorific prefix o- with taku, meaning “house”, it literally translates as “your house” and carries connotations of detachment and impersonality.

In English, the equivalent might be referring to someone as “sir” or “ma’am”.

How this word, generally associated in postwar Japan with the kind of scrupulously polite language housewives would use with neighbors and acquaintances, came to describe obsessive, introverted young fans of popular culture is uncertain and continues to be the subject of much speculation and debate. 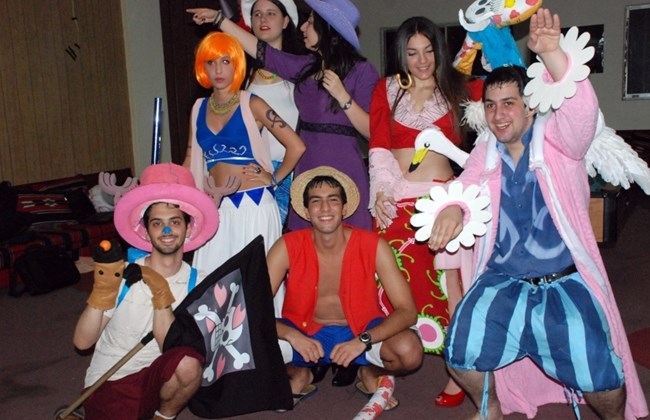 The first publication of the term “otaku” outside of the fan culture is generally credited to Akio Nakamori, who, in 1983, adopted the term to describe the social phenomenon of hardcore fandom in Japan during this time.

Nakamori chose the term otaku to describe what he identified as the particularly driven characteristics of fandom, in preference over the more conventional term, nekura ( maniac or enthusiastic fan). 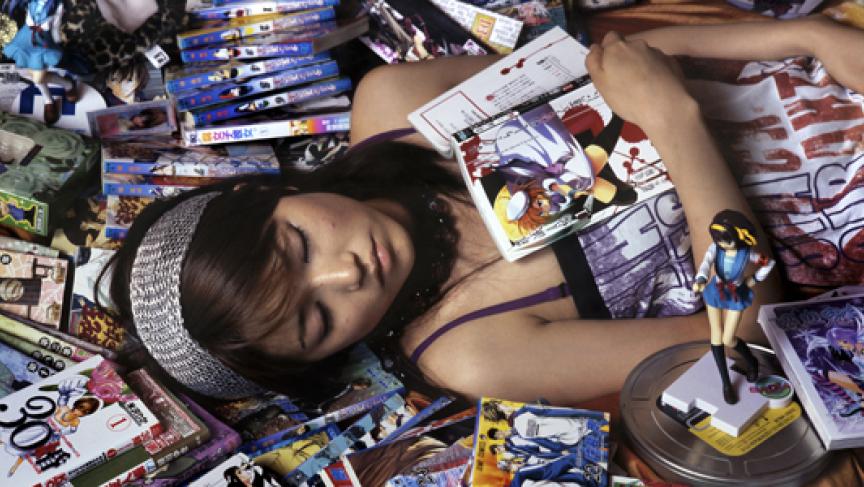 Nekura means ‘black’ and ‘dark’ and evokes the quality of a melancholic and extremely introverted character.

Miyazaki Tsutomu AKA The Otaku Killer

The widely publicized arrest of 27-year-old Miyazaki Tsutomu in 1989 was a key marker for the negative perception of otaku in public discourses.

Miyazaki was arrested for the abduction, murder and mutilation of young girls. Searching his home, police found evidence that he had murdered four young girls. They also found a collection of 5,763 videotapes and pornographic and pedophilic anime filled from floor to ceiling.

Public debates focused on Miyazaki as a socially alienated youth who was disconnected from reality and immersed within an otaku fantasy.

Japanese media persistently associated Miyazaki with otaku and dubbed him ‘’The Otaku Killer’’; the image of his room-unoccupied and windowless with videotapes stacked to the ceiling around a small, rumpled bed – became the dominant impression of an entire otaku subculture. 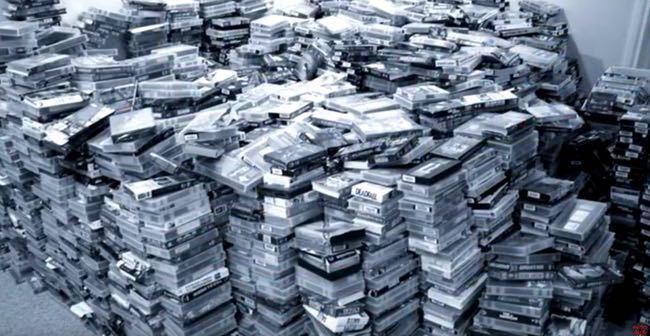 The outcome of his trial hinged on the question of his sanity, with the court concluding he understood the consequence and severity of his crime and sentencing him to death. He was executed in 2008.

The figure of Miyazaki still haunts the public perception of otaku.

Degrading Values over the Decades

This subculture associated strongly with antisocial fantasies and habits both violent and sexually perverted became a lightning rod in intense and histrionic public debates over social decay and the deteriorating values of Japanese youth.

For many Japanese, otaku meant an increasing number of sullen youth who would voluntarily taken leave of reality. 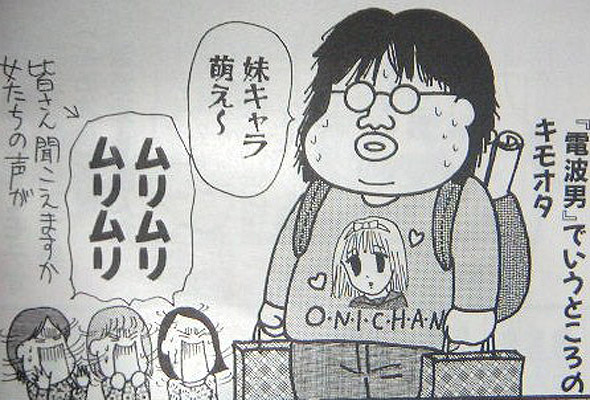 In 1960, youth were involved in radical political movements and new popular cultural activities such as manga consumption.

In the early 1970s in parallel with the expansion of these culture industries, youth were considered to be self-consciously immature, regressive, and dysfunctional, because they emphasized individualism and a lack of affiliations with organizations.

In the 1980’s, the mass media and culture industries were criticized for encouraging youth culture for its individualism.

For example, the ‘crystal tribes’ who were considered to be passionless cultural connoisseurs. 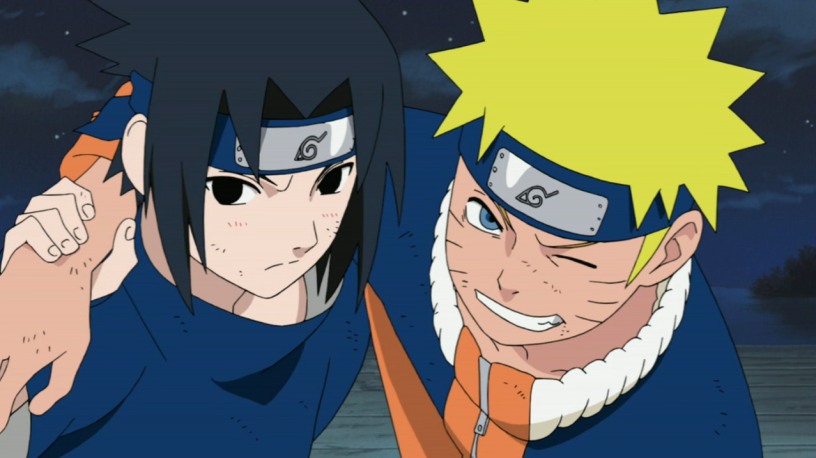 Otaku culture emerged within these contexts, and came to embody in the public imagination a particular section of youth who were considered the embodiment of fragmentation, individualism, and infantilism.

The interpretation of fans as symbolizing the decline of community, with audiences being passive consumers of mass media, resulting in pathological fans who are unable to differentiate between fiction and reality, is also considered to be an unacknowledged critique of postmodernity.

From the start, what seemed to characterized otaku, beyond their apparent social ineptitude and isolation, was the compulsion to amass huge amounts of trivial information on obscure, narrow and often juvenile subjects from animated television series to pop music idols to tropical fish.

What set otaku apart from previous generations of devoted fans, was the power and connectivity afforded by the Internet. It provided new means for collecting information and sharing it with like-minded enthusiasts. 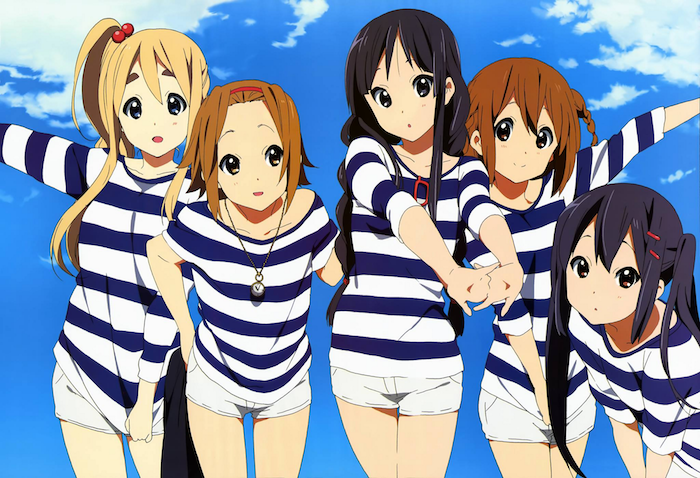 What was also striking about this new social formation of highly wired and technologically adept fans, was its sheer size: from the 1980’s on, Japan was said to have a population of at least 100,000 (and perhaps as many as one million) hard-core otaku.

Some scholars describe a long-running power politics surrounding the subculture. The ‘bad’ otaku shuts off from society, in a room with the objects of consumption, not participating in ‘normal’ forms of social formations.

Miyazaki embodied this stereotype and his prominence strengthened it.

In addition, we think of otaku as a male, but before 1989, they were often describes as both women and men behaved in ways the older fans or outsiders found unacceptable.

Before the killings, the otaku men were often portrayed as failures – economically, socially and sexually. 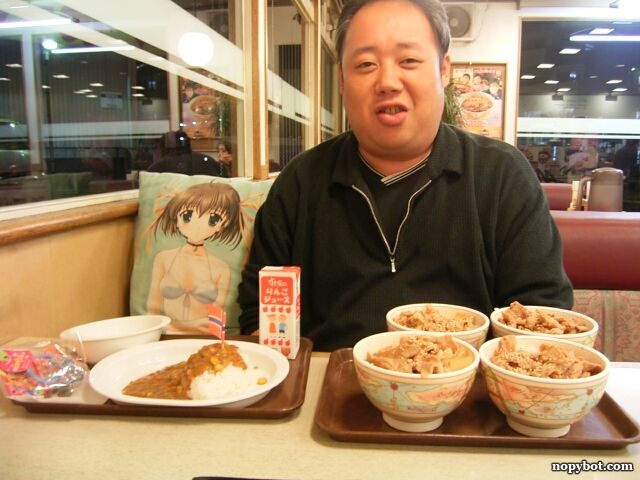 The term came out of the subculture as a negative self-description, but only after Miyazaki did it take on the stronger implication of social pathology.

Many social critics and psychologists have argued that the roots of otaku behavior lay within Japan’s highly structured, even oppressive, educational, and social systems. 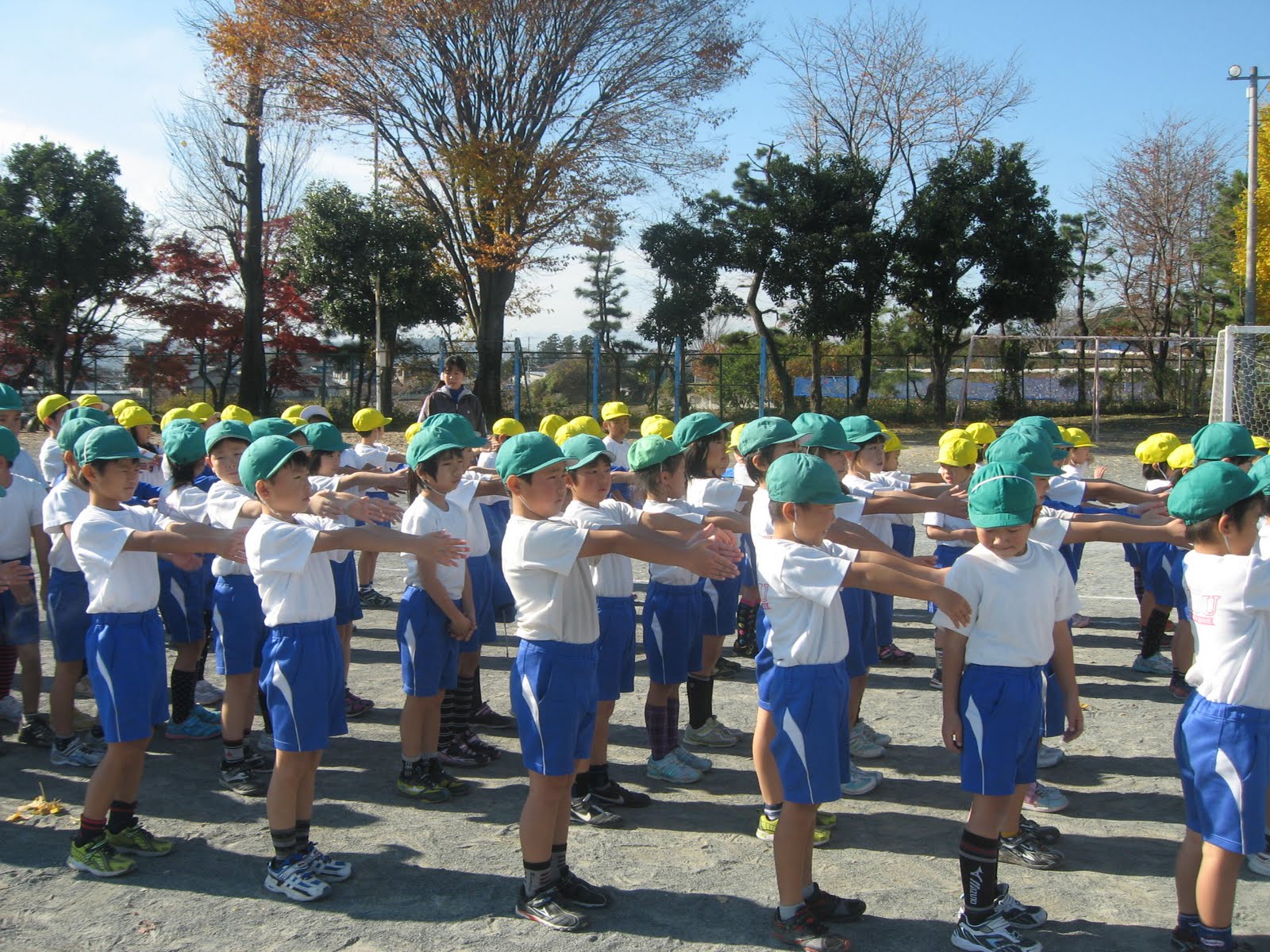 They have suggested that the information fetishism of otaku stems from the rigid routines of Japanese schooling, which emphasize rote learning and the memorization of vast quantities of fragmented facts.

The social awkwardness and reclusive tendencies of otaku, meanwhile, were widely understood to be reaction against the pressure for conformity, emphasis on the group, and elaborate standards of decorum that characterize Japan society.

Japan has always been known to be a strict culture, with high suicide rates compared to other countries, especially in modern times. 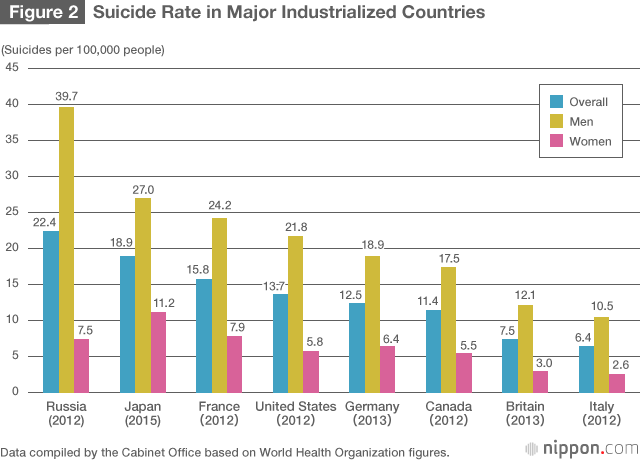 Japan’s otaku subculture has evolved in a variety of new directions. While many early otaku were fixated on science fiction, the imaginative and visually rich realms of manga and anime soon became the most widespread obsession.

By the start of the new millennium, otaku interest became overtly sexualized. There was a proliferation of gyaru-ge (‘girl games’, dating simulation software) and female fantasy characters introduced in manga, anime or as collectible plastic models. 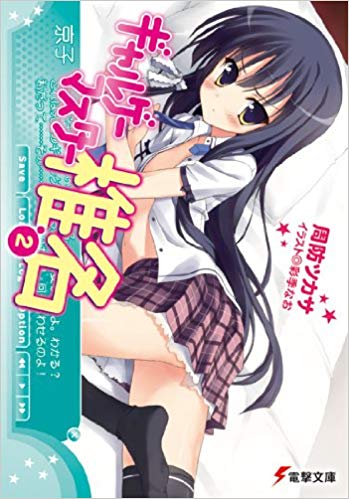 The characters are generally depicted as cute, vulnerable and sexually alluring.

Otaku adopted the almost indefinable term moe (derived from two homophonic verbs meaning ‘to burn’ and ‘to bud’) to describe a kind of profound infatuation for these fictional female creation – perhaps platonic, or rooted in frustrated sexual desire.

The discourses around otaku culture shifted as intellectuals such as Otsuka Eiji and Okada Toshio began to emphasize otaku culture as a symbol of Japan’s information society. 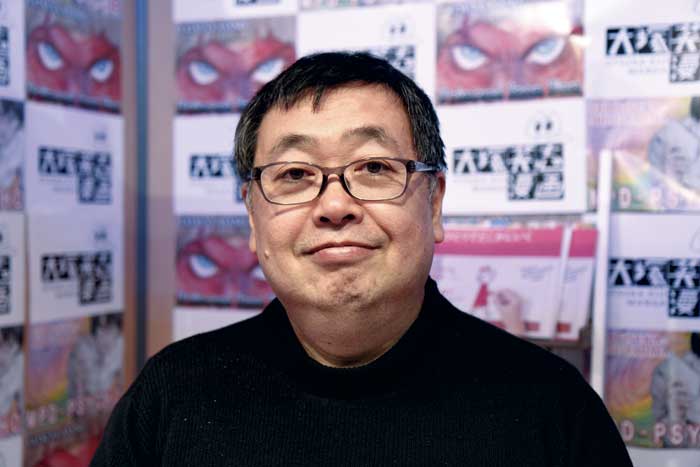 This shift also contributed to and was influenced by a transformation in defining manga, and the promotion of certain forms of manga artistic lineage, as part of national culture within and outside of Japan.

Surging Into The Mainstream

The long-term transition in otaku tastes, from science-fiction and animation to pursuits viewed by the larger society as perverted, pornographic, and pedophilic, was driven by the mainstreaming of anime and manga in the 1900’s.

As the Japanese public came to accept forms like anime, otaku felt compelled to move on to more outrageous and offensive obsessions in order to maintain their distance from polite society and their resistance  to its niceties.

Today, the image of otaku in Japanese media is quite consistent in general. The label has lost some of its sting.

The Akihabara district of Tokyo, known as ‘electric town’ for its high concentration of stores selling household appliances, has become a well-known otaku destination since the late 1990s. 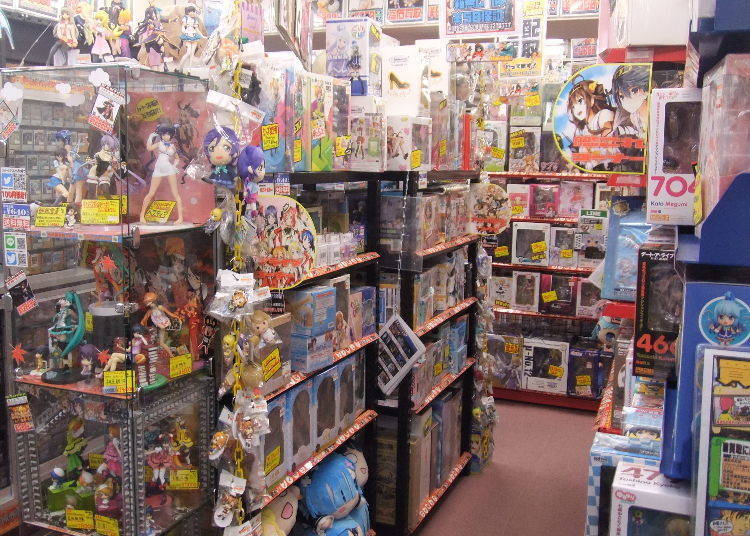 Akihabara now has hundreds of businesses, including ‘maid cafés’, where young female waitresses costumed as servants or anime characters wait on costumers, which cater to fan obsessions.

Increased public recognition has helped broaden culture; no longer confined to the image of a person-less room overstuffed with pop-culture cargo, otaku can take on more positive meanings.

It’s not just the obsessive, withdrawn loner, although that picture may never completely dissipate; now it can be the passionate expert.

Despite the positive image of otaku that is emerging, particularly in relation to the export of manga and anime, attention needs to be given to the persistently negative images of otaku and its continued marginalization within Japanese society. 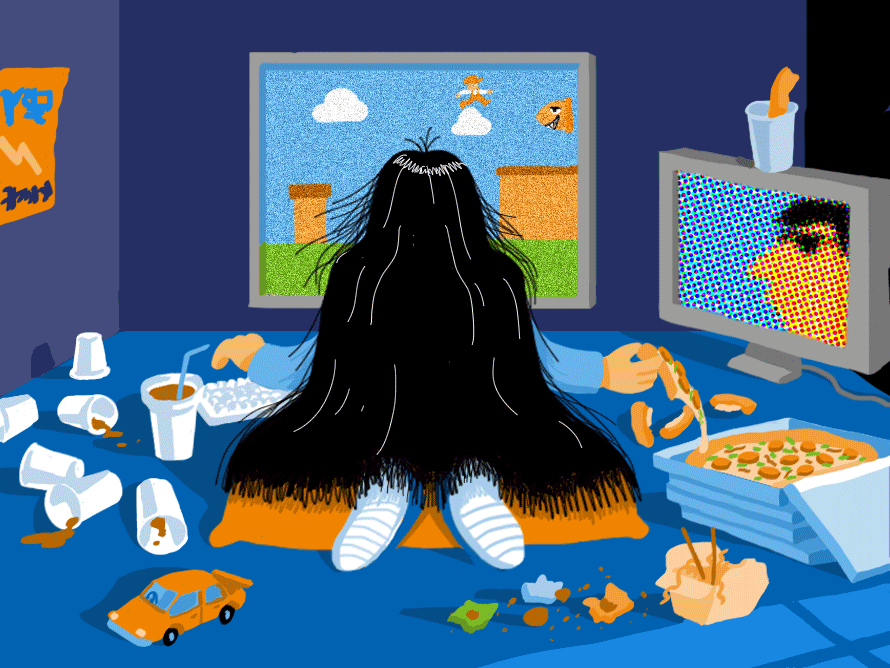 Otaku are also often linked in the public imagination with hikikomori (reclusive shut-ins), chronically unemployed NEETs (‘not in employment, education or training’) and freeters ( youth floating between dead-end, part-time jobs).

All groups are stigmatized in public discourse as symbols of the alienation and drift of Japan’s younger generation today.

The positive image of otaku conflicts with otaku self-definition that emphasizes, as matter of positive subjectivity, their social unacceptability.

Whether it is conceived positively or negatively the continual emphasis is still identifying otaku as different to other consumers of media forms.

Here are two videos related to otaku you might like to watch.  First there’s Akihabara Geeks, the 2005 documentary.