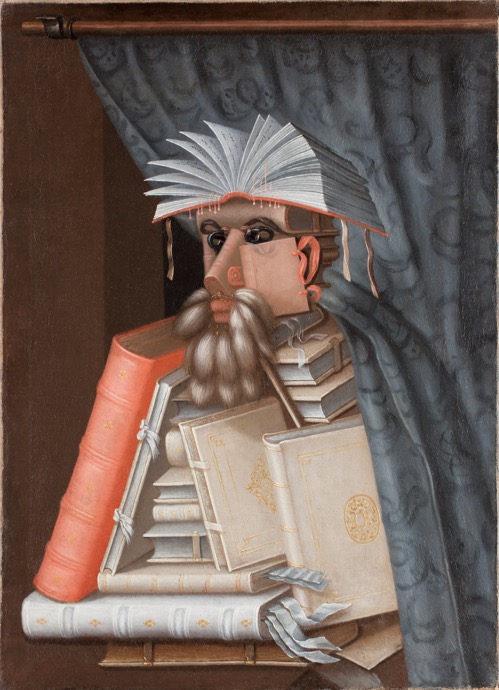 When you think of the art of the late 16th and 17th centuries, you likely picture the early stages of Italian Baroque, or maybe the later years of Mannerism—it’s stately, emotional, and dramatic, but mostly tasteful and even traditional.

Shapes and colors are sometimes exaggerated, but it’s not anything you’d expect to inspire the likes of Salvador Dali or Marcel Duchamp.

It reflects the art of the Counter-Reformation, or the movement to strengthen Catholicism through much of Europe. When you move a bit further east, to the capital of Bohemia, the city of Prague, you’ll find something very different.

The court of the Hapsburg emperors, including Rudolf II, produced some of the most playful, whimsical and unusual art found in nearly any period before the 20th century. Here’s a “quick” 30-minute video about Rudolf II and the times in which he lived, called “”The Apparition Of Knowledge In The Court Of Rudolph II”, to give you some context on the artistic atmosphere for the time, place, and persons in question in this article (namely, Guiseppe Arcimboldo).

Don’t have 30 minutes? Skip ahead, this isn’t school… its the internet!

Ah, yes, Rudolf II created a remarkable court, bringing in writers, poets, humanists, astronomers, and artists. He was especially fond of foreign artists, and collected a wide range of work. He even created an entire cabinet of curiosities, his Kunstkammer.

Arcimboldo painted portraits, but these were not ordinary portraits at all. Arcimboldo painted portraits by composing figures of various objects, like fruit, vegetables, books and fish. From a distance, the portraits look quite ordinary. Up close, they’re far from ordinary. The objects weren’t at all random; in fact, they were carefully chosen and frequently quite meaningful.

His composite portraits began with an allegorical series of paintings of the four seasons in 1563. The Four Seasons series sought to display the imperial Habsburg court and its rulers as symbols of power and nature.

They ruled, according to Arcimboldo, because it was part of the natural order for them to rule.

Here is Arcimboldo’s “The Four Seasons”…pretty radical for the 1500’s, no? In 1590, Arcimboldo painted Rudolf II himself, crafting the emperor’s image out of gourds, peapods and other vegetables. Rudolf embraced Arcimboldo’s unusual style, and apparently quite liked the strange portrait. We’ve shown it above the previous image – you can’t miss it.

The composite portraits are certainly playful—and to the modern viewer, maybe even a little bit surreal.

They’re also a clear reflection of the growing interest in science and botany in the period. Arcimboldo’s portraits show a careful observation of the natural world. They incorporated a range of exotic produce, including things like corn and eggplant.

Many of these crops, native to areas other than Europe, would have been quite unusual in the late 16th century. Was Arcimboldo brilliant or mad? Did he embrace Rudolf’s tolerant court or mock it? The answers to these questions are still unclear. We do know that the Hapsburg courts, first under Rudolf’s father Maximillian and later under Rudolf II, liked Arcimboldo’s work.

He not only painted their portraits, but also designed costumes for royal pageants and presentations, frequently in the same style.

Arcimboldo’s works were largely lost during the Thirty Years’ War, and only rediscovered in the early 20th century. Twentieth-century theorist Roland Barthes wrote, of Arcimboldo, “Before one of Arcimboldo’s Composed Heads, I am led to not only say of it: I read, guess, discover, and understand, but also: I like, I don’t like.

Uneasiness, fear, laughter, desire all enter the game.” This quote reflects the perceptions of not only Barthes, but many of his contemporaries who took an interest in Arcimboldo’s work, including Rene Magritte, Pablo Picasso and Salvador Dali.

The painting below shows one of Arcimboldo’s famous reversibles, where, if you turn it upside down, you see that the painting began as a still life including a bowl of curiously arranged vegetables. But here, we see that it is meant to suggest the appearance of a person. Lost Arcimboldo works continue to come to light, and to inspire the art of today.

Recently, sculptor and filmmaker Philip Haas produced a series of large-scale fiberglass sculptures inspired by Arcimboldo’s 1563 series The Four Seasons. The portraits are in profile, but the sculptures offer a three-dimensional take on Arcimboldo’s images.

Each portrait is portrayed as its own sculpture, measuring some 15-feet tall. The imagery present in each represents both the season and Arcimboldo’s work. Oh look, there’s one now! We sometimes think of the interest in the strange, the bizarre or the unusual as a modern phenomenon, born in the days of Dada and Surrealism; however, as Arcimboldo shows, those same interests appeared long before the modern era.

For Arcimboldo, as for many artists of the modern world, innovations and discovered served as the inspiration for art and for creation, whether those discoveries are the new materials and technology of today, or the new fruits and vegetables of yesterday.

Here is a documentary talking about Guiseppe Arcimboldo and his unique style.