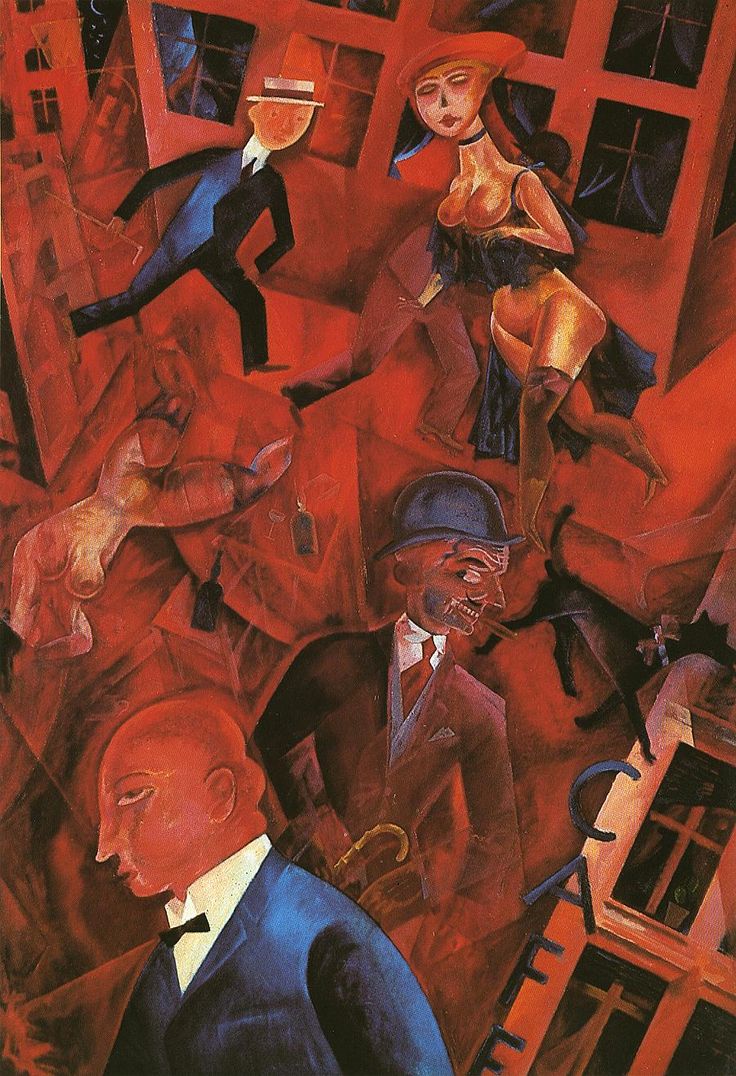 Expressionism is one of a number of art “isms” from the early 20th Century.

The movement developed between 1905 and the 1920s and reflecting a number of crucial themes. Artists were deeply concerned about the state of the world and modern city life.

Despite having some doubts about Modernity, artists were still captivated by the more “immoral” activities of modern life.

Later Expressionist work responded to the aftermath of World War I and its devastating effect on humanity. Most Expressionists were German, although other artists worked out of Russia, Norway, Czechoslovakia and Austria. The movement was adopted in film, music, art and architecture.

Directors like Robert Weine and Fritz Lang used Expressionism in their set design, costume and marketing.

Here’s Robert Weine’s film “The Cabinet Of Dr. Caligari” from 1920. As you will see, the aesthetic of expressionism hints at darker themes, and traces of madness and illusion.

With expressionist architecture, there was a similar leaning as with film in that architects were concerned with new forms, innovation, but also a certain oddness that permeates some of the greatest works.

Architects like Bruno Taut and Erich Mendelsohn also began to explore Expressionism, creating two of the most iconic works of the day.

Perhaps you are familiar with Bruno Taut’s “Glass Pavilion” from 1914 (shown below). …or Erich Mendelsohn’s The Einstein Tower… At the turn of the century, a shift in style lead Expressionists to reject Impressionist ideas.

Where Impressionism was a more optical response to art, Expressionist art became more visceral. These artists wanted to capture more than mere fleeting moments in time.

They set about placing spirituality and authenticity back into art.

With Claude Monet’s famous “Bridge Over A Pond Of Water” from 1899, we see an artist who is attempting to visually capture the essence of a place, using light and color, and is arguably the opposite of the type of more symbolic and deeply personal work that the Expressionists would explore not long after this time. This desire to look “inward” began around 1890. Post-impressionists like Paul Gauguin, Paul Cezanne and Vincent van Gogh questioned Impressionism’s need to only paint what they saw. Instead, they considered emotions, memories, and their background in order to connect to viewers on a deeper level.

By using colour and shape they expressed how they felt about the world around them. Paintings became more abstracted than before, and the artists started to look at the way paint was applied to the canvas surface.

So how did the Expressionists set about making their work feel more authentic? One way was to look at different cultures displayed in museums and at world fairs.

Primitive art from both Oceania and Africa influenced the painting of faces and bodies. Another way Expressionists made their art more “real” was by tapping into the intensity of their own emotions. Expressionism became an intensely personal body of work for these artists.

Artists began to express their own reactions to the world with swirls and vigorous brush strokes.

New technology and massive urbanization altered peoples’ worldview, and the Expressionists were no exception. This migration to the larger cities brought new social problems that artists showed in their work.

Die Brücke (The Bridge) was formed in Dresden in 1905 continuing until 1913. The renowned artist Ernst Ludwig Kirchner became the group’s spiritual conscience, and insisted on artists expressing their inner thoughts. Other shared studios emerged in Berlin and Munich. Der Blaue Reiter (The Blue Rider, 1911-14) was named after Kandinsky’s painting that graced the cover of the group’s manifesto.

The school was established in Munich during 1911 where August Macke, Paul Klee and Franz Marc were major contributors .

These artists would become some of the most important artists of the movement. The third key group of Expressionists ran out of Berlin.

The New Objectivity movement included Otto Dix and George Grosz who added a strong sense of Realism to their art. Their work was often satirical, commenting on wartime and post-war corruption.

This resignation and cynicism is seen in both Dix’s and Grosz’s works. Their “visual commentary” was aimed at the fruitlessness of World War I, and those who profited from the war.

Themes -The City, Modernity and Alienation The urban landscape of the early 20th Century became food for thought for some Expressionists.

They started to paint their own reactions to the troubles of the modern world. These “painted social criticisms” of Modernity, highlighted the alienation of individuals who lived within the city.

This was seen in paintings by artists like George Grosz. His work commented on the social decay, alienation, and the corrupting force of Capitalism.

Grosz’ paintings of prostitution for example, are visual commentaries on this social and moral decay.

Here is a selection of key Expressionist artists and their works. There are many great Expressionist paintings out there. Unfortunately, there are too many to show here.

This is a small representative sample of different artistic styles from leading artists who worked within this movement. (Characteristics: use of colour, the city as subject, strange distorted angles, exaggeration, flattening of the space) (Characteristics: the use of the wood cut was often used in Expressionist work. Jagged and distorted angles, Primitivism – a mask-like face, intense emotional impact- shown in the sunken eyes and hollow face, flattened form) This painting is also influenced by the Italian Futurists who were trying to capture the speed and violence of the city. Abstract Expressionism surfaced in the USA around 1945 and was particularly strong in New York during the post war period. The emotional outpourings of the artists have often been linked to the feelings of disillusionment, and horror, experienced after two world wars. 2 thoughts on “What Is Expressionism In Art?”