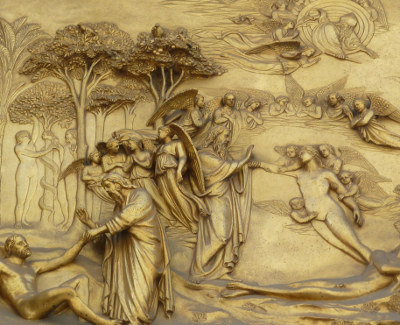 After the fall of the Roman Empire in 476 AD, there was a time for a few hundred years known as the Middle Ages. People in the Middle Ages were very conservative and restrictive.

The Church began to gain power because people needed emotional and spiritual support, and they could get that from religion. Much of the advances in the arts and sciences, and even government, that had been made by the Greeks and Romans, was lost when those societies collapsed.

For those reasons, some referred to this period as the Dark Ages. In the early 1300’s, a rebirth in all aspects of society began. It was subtle at first, but picked up speed very quickly. People were ready to feel important once again. They had had enough of feeling bad about what happened when the great societies of Rome and Greece collapsed.

It was time for new ideas and a feeling of being positive. This was the beginning of the Renaissance.

Humanism was the beginning of thinking differently about life in general. The more educated the people became, the more they read about the Greeks and Romans. They began to believe that everyone is talented in some way and everyone needs everyone else.

Now, people thought that life could be enjoyable and they could have comforts. They started to think that people should learn about art, music, and science once again. This new information would make life better for everyone.

This was a real change in the way people thought.

There were many rich and powerful families in Florence Italy at this time. Even though Europe was made up of countries with royal families who were very powerful, each city was in charge of its own future.

The government was known as a city state. The Medici Family was one very powerful family living in the Florence area of Italy. Italy was divided in to city states that were controlled by wealthy families and the Medicis had the most money, so they basically controlled Florence. Their government was a republic, which meant that the people elected their own leaders.

There were so many rich families in Florence that they began to compete by hiring artists to create art for them. Religion was still an important theme. The Medicis were bankers and they supported the arts and the Humanism idea.

Education became very important also, and the wealthy families wanted the common people to become smarter so those in power tried to improve the education system. This was a time when explorers were sent around the world to find new lands.

It was a time when scientists were valued and many things were invented. This Humanism way of thinking began to spread throughout Europe. The world was opening up. People such as Columbus, Galileo, Gutenberg, Michelangelo, Shakespeare, Da Vinci were all part of this movement. Naturalism describes a true-to-life style which involves the representation or depiction of nature (including people) with the least possible distortion or interpretation. Naturalism is different that realism. Naturalism is concern with the method of painting and the techniques used to make the subject look accurate.

The naturalism of the Renaissance was a method of painting that elicited emotions. It was a way to represent the all people as human with all kinds of emotions no matter how much money they had.

Realism came later and was concerned with the content and why certain things were in the painting.

The Early Italian Renaissance artists did not break from Gothic Art completely. These artists did begin a movement that tried to show nature and the human being in its realistic classical sense. These 4 famous examples depict the naturalism and humanism so beautifully.

Why is this artwork important?

Portrait of Giovanni Arnolfini and His Wife Why is this painting important?

The Descent From The Cross Why is this painting important?

Why is this manuscript important?

The early Italian Renaissance is generally considered to have begun in the southern part of the Netherlands known as Flanders, and in Florence and Venice Italy, around the years 1350 to 1400. It was time to bring emotions back into every day life.

Realistic art, which included not only people, but the natural space that they existed in, was the new challenge of these very talented artistic people.

More on the Renaissance: