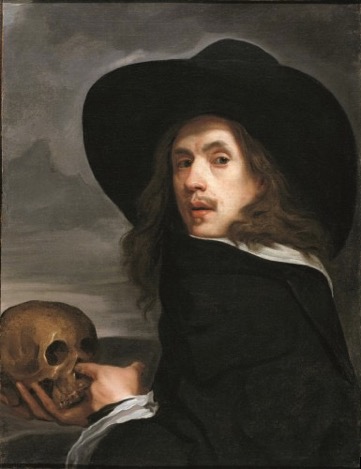 If you’ve ever walked through a museum, through the galleries of European paintings, you might have noticed something a little bit unusual. There’s a preponderance of skulls in these paintings. Portraits have skulls, still lives have skulls, and even religious artwork has skulls at every turn.

Unless you are a mortician or a grave robber, you might be wondering what is going on with all of these skulls? Every Day Is Halloween

It’s not that skulls are a particularly delightful subject to paint, or that it was considered aesthetically appealing to add a skull to your still life of flowers; in fact, the skulls had a clear and distinct meaning in the art of the early modern world.

Let’s simplify that meaning in modern terms, “Here today, gone tomorrow.” The skulls (and skeletons and bones) were a reminder that earthly life was short. Particularly in the past, life was not only short, but often quite unpredictable.

Early death was common, and wealth did not protect anyone from that. Art historians use several different terms to describe these reminders of mortality; the most common are memento mori, which translates to “Remember that you have to die,” and vanitas, meaning emptiness. Sometimes works are much more obvious about their references, with skeletons playing a key role in the work.

These works fall into the category of the Danse Macabre. Occasionally, skulls and bones play a different role in art. They can symbolize a particularly saint, or a saint’s relics, but most of the images you’ll see of skulls in art are there to remind you that you have to die.

Danse Macabre even has its own soundtrack, so to speak, which emerged later (1875), thanks to French composer Camille Saint-Saëns.

The Danse Macabre is the oldest of these representations in European art, and dates to the late 14th century, not long after the Black Death devastated much of the known world. The first versions of the Danse Macabre were didactic, or teaching, poems in the form of dialogues between a living person and death.

Murals portraying the Danse Macabre were common in churches throughout the 15th century, but varied. Most showed a round dance led by the figure of death, or alternating dancing live people and skeletons.

We must admit, it does look like a lot of fun! Eventually, the imagery of death moved from the church walls to private art, particularly as the Protestant Reformation in the late 15th century changed the art world. Well-known artist Hans Holbein the Younger created a woodcut series of prints for the Danse Macabre (shown at the top of the article), but also produced one of the more interesting skull images of the period.

Holbein’s 1533 painting, the Ambassadors, shows two men, leaning against shelves of worldly goods. On the floor in the foreground of the painting, there is an image of a distorted skull, clearly visible only when viewed from a certain position to the right of the painting.

If you want to learn more about The Ambassadors by Hans Holbein The Younger, watch the below video and enjoy this detailed lecture on the topic.

Skulls are a common addition to portraits in the period, often arranged alongside other decorative items on a desk, table or shelf, or held in a simpler, seated portrait. With The Ambassadors by Holbein, as elsewhere, the skulls remind the viewer of the temporary nature of life.

In addition, they bring a sobriety to the portrait, a message about the sitter’s virtue and interest in the afterlife. The sitter may engage with the skull, or ignore it entirely. Oh, and by the way, if you’re looking at this piece and wondering where the skull is, Hans Holbein The Younger was kind enough to put it in the painting using anamorphic perspective.

What Are Vanitas Paintings?

Vanitas paintings are still life images that include aspects of death, often a skull. Still life painting was largely decorative, and most popular in the Netherlands. In Protestant countries, religious art was entirely unacceptable.

Still life painting avoided any potential question of religious content, but still strove to be serious, and to portray a message about the purchaser. Opting for Vanitas images added a severity and seriousness to what were often frivolous paintings.

In some cases, the skulls are replaced by other images of death or decay, like rotting food, insects, or decaying flowers. So, Why All The Skulls?

So, to answer that initial question, “Why all the skulls?”, we have to recognize that while skulls may share the same basic meaning, the reason for their portrayals may differ. In churches, the reason was clear; death is coming, be prepared.

In portraits or still life works, it is less clear. These images don’t serve to inform or teach. They may preserve an image, serve as a sort of publicity in an era before widespread printing, or decorate.

Here in the above work, the skulls say something about the patron, the sitter or the purchaser. They recognize that this world is temporary, even when the object itself, an oil painting, is a luxury item.

They say that the patron or sitter knows that life is short, and is thinking, already and appropriately for the time, about the afterlife.

There’s one more depiction, if you can call it that, of skulls we did not discuss—the ossuary. Come back soon for the creepiest architecture and construction of them all!