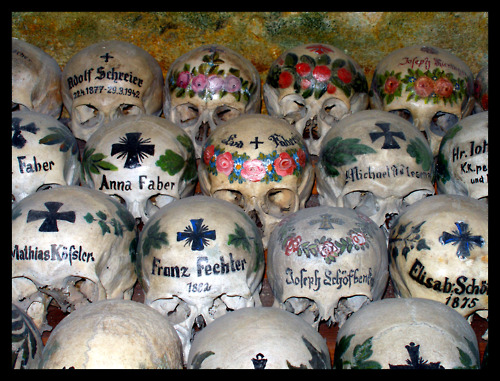 Ossuaries are containers of bones, ranging from buildings to boxes. They have a very long history, with some common threads throughout time. In all cases, the bodies were temporarily buried or stored to allow the natural process of decay to take place.

Once some time had passed, the bones were removed, cleaned and moved to the ossuary. Some ossuaries aren’t terribly interesting; they’re shelves with bones. Others are significantly more creative.

Here now are some of the most famous ossuaries in the world. Take the tour with us and prepare to look death straight in the eye socket!

The crypt of the church of Santa Maria della Concezione contains the bones and remains of 4,000 Capuchin friars. The chapel preserves some bodies fully intact, dressed in the Capuchin habit. Most of the bones have been disassembled, and used for artistic decoration on the walls, doors and pillars of the church. A sign, printed in three languages, reads, “What you are now, we once were; what we are now, you shall be.” Delightful. The bones of the friars were collected and assembled in Santa Maria della Concezione between 1500 and 1870.

The Capuchin friars came to the crypt to pray regularly.

Here is a short video to give you an idea of the morbid splendours of this ossuary. Enjoy!

Chiesa de San Bernadino alle Ossa is a church in Milan, Italy. While the majority of the church is rather ordinary, the side chapel is quite unusual. In 1210, a room or chapel was built to hold bones, as the adjoining cemetery had become full. The church, but not the ossuary, burned in 1712, and a larger church was rebuilt as the ossuary was already becoming quite famous. The walls, doors and pillars of the ossuary are covered in human bones, predominantly from the patients of the local hospital and the monks who cared for them. The vault is decorated with frescoes by Sebastiano Ricci, painted at the end of the 17th century.

Here is a video showing the inside of the church. Have fun!

The Chapel of Bones in Evora in Portugal

The Chapel of Bones in Evora, Portugal offers another perspective on the ossuary. By the 16th century, cemetery space was becoming a problem, so the monks chose to move the bones from the cemeteries to an interior chapel. An inscription at the entrance reads, “We bones are waiting for you”.

Here is a short video taking you inside the ossuary. Cheers!

In the Czech Republic, the Sedlec Ossuary is a small chapel, located beneath the Cemetery Church of All Saints. While work on this ossuary began in the early 16th century, the finished chapel dates to 1870 and is the work of a woodcarver, Frantisek Rint. The chapel contains a massive central chandelier, containing at least one of every bone in the human body. Draped garlands made of bones decorate the space, and the walls, coat of arms, and other decorations are made of bones.

Get better acquainted with Sedlec Ossuary in this short video. Maybe if you grease their palms a little bit, your skull could even be in there some day…

The Basilica of St. Ursula in Cologne, Germany is a Romanesque-era church with a Gothic style choir; it is particularly remarkable for one of its small chapels. The Golden Chamber or Goldene Kammer features the bones, it is said, of St.

Ursula and her 11,000 virgins, found in 1106. The original legend stated that Ursula died with 11 virgins, but that number grew over time. The chapel contains significantly more than 11 skeletons, but fewer than 11,000. The bones are not all women, but include men, children, and even mastiff dogs. The bones are arranged in letters, swirls and designs on the walls.

Unlike the other ossuaries, this one is designed as a reliquary, and bears the costly and lavish decoration you would expect in gold and silver throughout.

Just watch this video and you’ll be wondering, “Who was this talented interior decorator who went to all this trouble?”

Not every ossuary is decorative. Some are simply practical, like the catacombs in Paris or the Beinhaus in Hallstatt, Austria. These spaces hold bones, because storage was needed. While they are open to the public, the bones do not serve a significant decorative function.

In the catacombs, cleaned bones are neatly arranged. In the Beinhaus, they are painted and decorated, but sit on simple wooden shelves. Ossuaries served a dual function; they were practical, providing a space to store bones when sanctified space for cemeteries was in short supply. When integrated into a religious space, they also provided a sort of memento mori for the viewer, a reminder of the fleeting nature of life, and of the realities of mortality.

Have a great day!