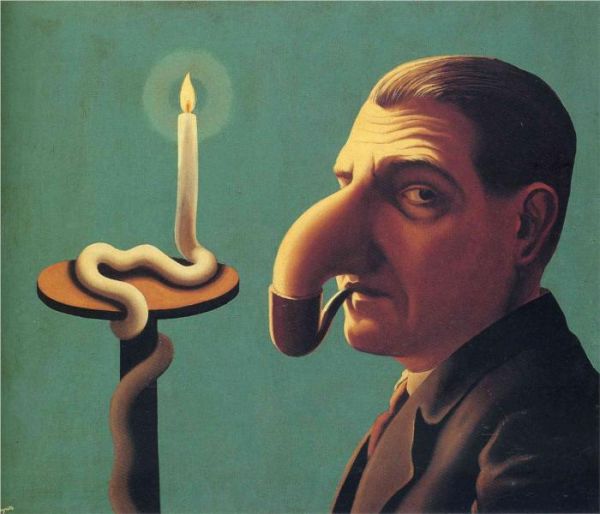 The concept of dark surrealist art has been a major aspect of surrealist work from its very beginnings. Surrealism (or “above realism”) has its dark roots in the aftermath of World War I and the Dadaist’s response.

Its outlook was an anti-rational, apolitical and social response to a world that allowed a horrific disregard for humanity. Whatever the reason surrealists rejected any degree of rational explanation. Instead they embraced chaos and unconscious desires, and Freud’s theory of psychoanalysis.

Surrealists believed that the adoption of these principles would help in discovering the true world – through the unconscious mind and interpretation of dreams. So what does this mean for dark surrealist art?

Psychoanalytic desires and unconscious thought was central to producing surrealist art. Chaos, unconscious desires, the interpretations of dreams, our repressed desires were important to their works. These superior thoughts and processes trumped all rational thought.

No longer shackled by society and its rules, surrealists were free to tap into their unconscious and paint whatever floated to the top. The unconscious meant that artists could tap into the sexual and violent thoughts and desires that were otherwise repressed.

This often meant that works had dark surrealist themes, and overtones, in the artworks of these early painters.

Freud’s interpretation of Dreams influenced surrealist work and still does. It legitimized the use of dreams and the secrets our unconscious hold. Surrealist artists painted dark themes of fantasy, violence and desire. As a result, artists painted works that forced viewers to think, without providing them with a definitive answer.

Characteristics to look for:

Certain characteristics can be found in almost all surrealist work. When engaging with dark surrealist art always consider their use of:

Look also for some of the following devices:

Dark surrealist themes can be found in the artists’ dreamscapes where their memories, fears and neuroses go berserk across the canvas. Looking at the great artists of the 1920s and 1930s, you can find traces of many of their fears and anxieties.

Paintings infested with insects that terrified him…

Dali was both scared, yet compelled, by death. The skull acted as a symbol for human mortality in his and other dark surrealist artworks.

In this work Dali uses his “paranoic-critical-method” to appeal to his hero, Sigmund Freud. This “dual concept” painting has no rational link between the images. Dali exploits this to show how the irrationality of the brain spontaneously links the skull and ballerina.

The result – an ambiguous image that can now be interpreted in multiple ways. Dark surrealist features include: levitation of the skull, element of surprise, unrealistic scales, hidden images.

War had a major impact in the first half of the 20th century –with two world wars and the Spanish Civil War, death was all around. In this painting completed in 1940, the theme provides dark surrealist content.

The main focus is the horrible face of war, captured in the horror of this painting. The skull presents a view of war against an unfertile landscape. Its withered, miserable appearance, suggests a corpse in extreme misery.

The repetitious identical skulls that make up the eye sockets and mouth, implies a doomed sense of infinity. Surrounding it are serpents, biting at the skull and its abject misery. Key surrealist features: repetition of images (the skull), dream-like background, cooler colours, unrealistic scale,

Magritte’s work is seen as lighter than other surrealists’ work. However, this is a simplistic overview and he too has a darker surrealist side lurking. Magritte watched as his mother was fished from the river after she committed suicide when he was just 14.

He remembered her dress floating over her head and several works include a cloth that covers his subjects’ heads.

Works like Le Voil, (The Rape), would knock Magritte’s bowler hat fans from their safety perch, given its explicit subject matter and form. Other darker surrealist works include murder scenes that hint at violence and perversity.

Two of his works that present this darker, more violent side of humanity, are The Menacing Assassin and The Titanic Days. Dark surrealist art explores these themes, exposing extreme and repressed desires.

This is s sinister scene that has at its centre, a dead naked woman, strewn across a bed, while the murderer packs up ready to flee the scene. Men stand outside ready to capture.

This is a banal scene, but its perversity is a rare glimpse into the mind of the artist.

A disturbingly dark painting. The Titanic Days is erotically charged, violent and disturbing. The scene depicts a man attacking a woman, an attempted rape. His hand forcefully pushes against her leg, and the terror of fear grips the female who is pressed up against her attacker’s shoulder.

André Masson was traumatised by what he witnessed during WWI, WWII and the Spanish Civil War. He was injured himself, and this left an indelible mark on the man, who used his art to express his disdain for the absolute violence he witnessed.

While his palate is bright and full of colour, this painting explores dark surrealist themes.

Ernst’s use of decalcomania highlights the devastation of war, scorched worlds, rotting corpses and the remains of people from the scourges of war. In The Eye of Silence, the distant horizon represents the lost world the subject grieves for.

The irony of the “great European New Order” Hitler promised is not lost here. Calcified bodies anchored to barbarous landscapes places this work in the realm of dark surrealist art.

Today there are still many examples of surrealism being produced across a range of mediums. Here are a selection of painting and digitally rendered dark surrealist artworks. Under each caption are Surrealist characteristics found in the work.