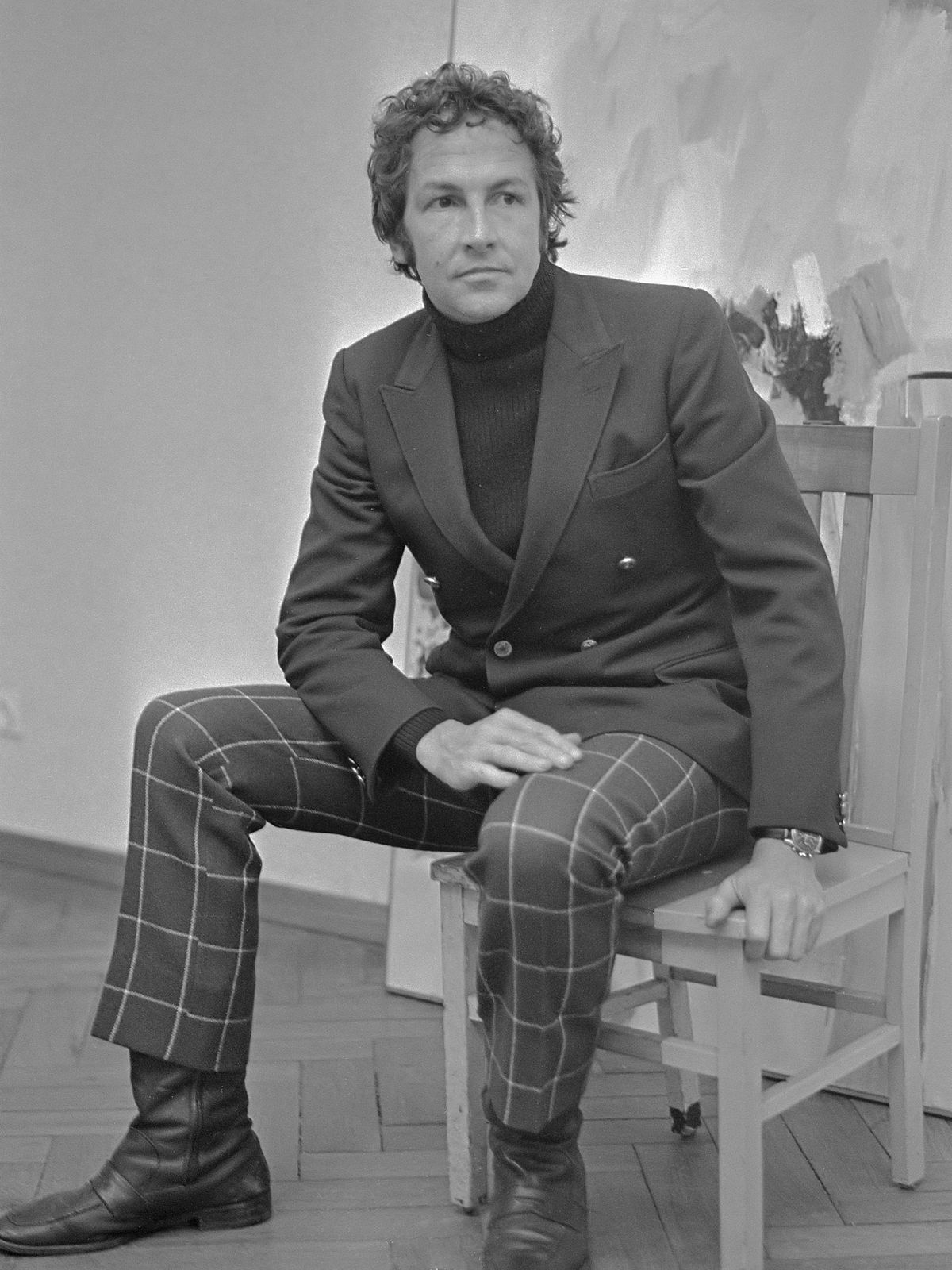 Robert Rauschenberg was an influential, non-traditional American artist heavily influenced by the New York School, who were a group of artists, poets, musicians, and dancers who were reaching their peak popularity in the 1950’s and 1960’s.

Robert was a progenitor of the pop art style, often mentioned in the same breath as the likes of Jackson Pollock for his revolutionary approach to modern art, mixing together styles of art such as print-making, collage, photography, and sculpture. 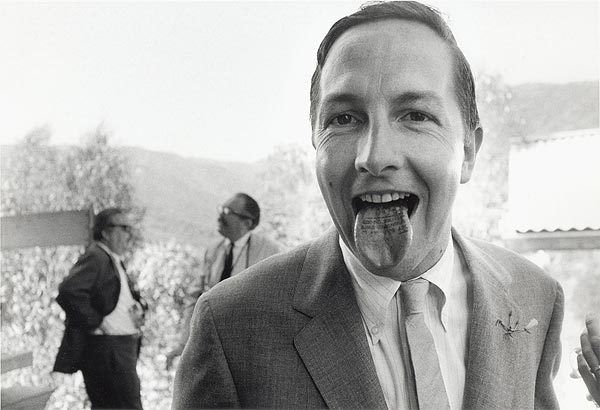 Robert Rauschenberg was born Milton Ernest Rauschenberg on October 22, 1925, in Porth Arthur town in Texas, USA.  He was one of two children (he had a sister named Janet) and he was raised in a Fundamentalist Christians household.

Rauschenberg was dyslexic growing up.  That said, at the young age of 16, he went on to study Pharmacy at the University of Texas. Soon after, he served in the United States Navy, where he worked briefly as a mental hospital technician until his discharge in 1945.

Following that, in 1947, he enrolled into Kansas City Art Institute.  Shortly thereafter, he went to Paris, where he continued his studies at Academie Julian.

Thinking back on this decision, Rauschenberg would joke that it was 40 years too late, as this great city, known for its artistic flair, had changed greatly from the beginning of the 20th century when it was mecca for many famous painters.  Still, he made friends there, as well as his future wife and ex-wife, painter Susan Weil. 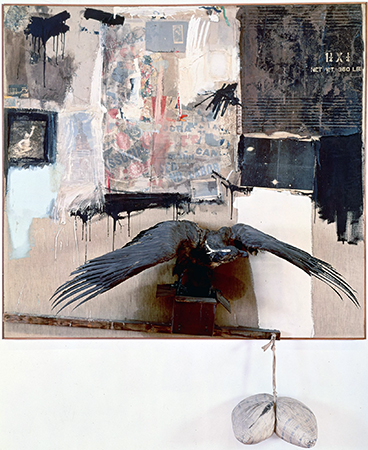 In 1948, he returned to the USA, where he resumed his artistic studies at Black Mountain College in North Carolina, where he had the opportunity to be taught by the German artist Josef Albers, a founder of the Bauhaus, who tried to rid Rauschenberg of his experimental tendencies.  Thus, they clashed, and soon Rauschenberg became the pupil of John Cage, who better suited his experimental nature.

While in New York in 1949-1951, Rauschenberg encountered many contemporary artists who influenced him and vice versa, such as Vaclav Vytlacil, Morris Kantor, Knox Martin, and Cy Twombly.  While in New York, Rauschenberg had his first solo exhibition at the Betty Parsons Gallery and his popularity begin to grow exponentially.  This exhibition featured his “combines”, which combined painting and sculpture. 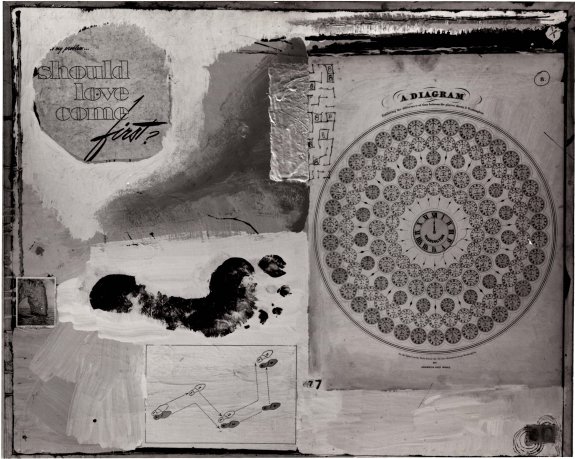 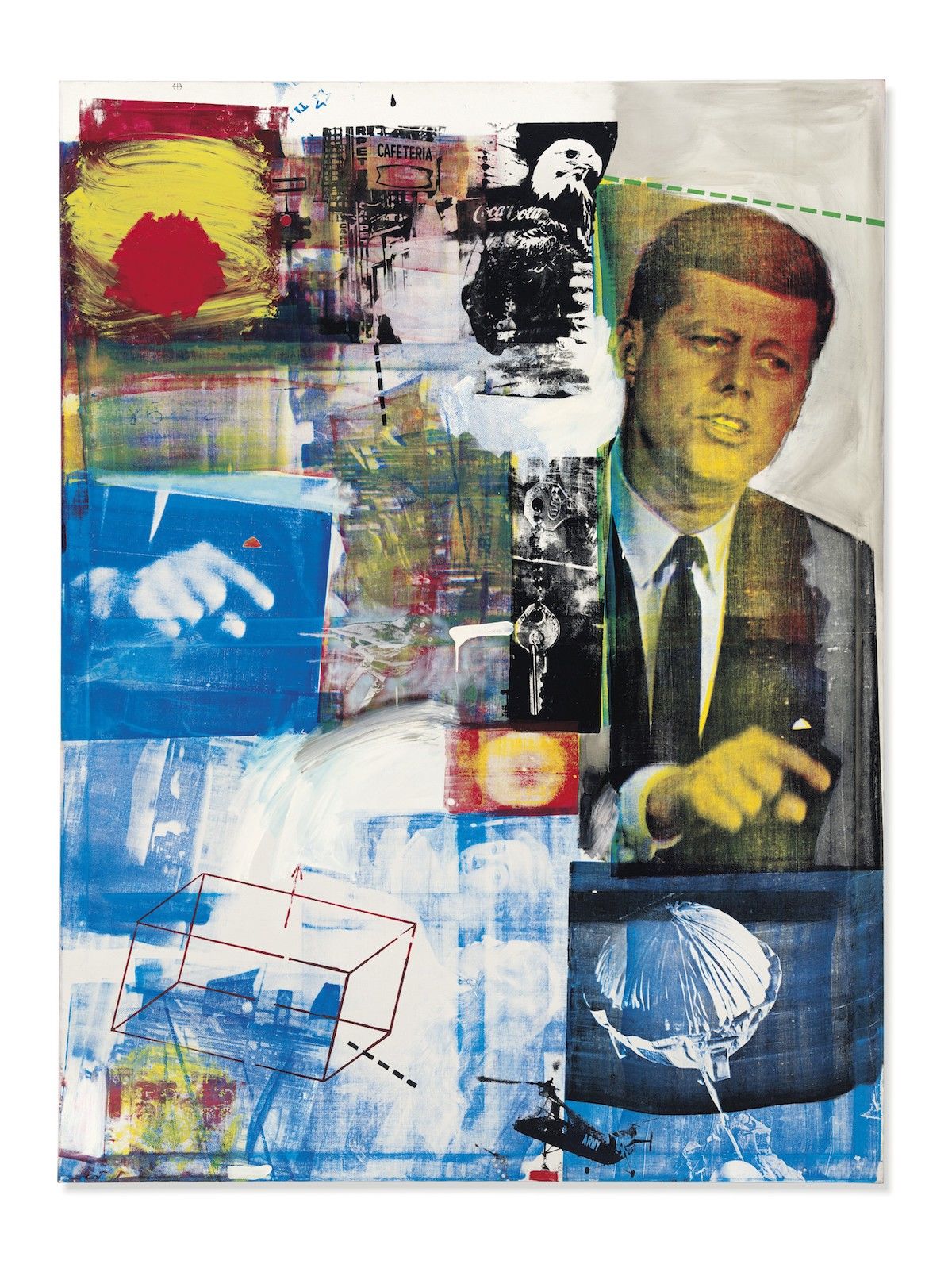 Robert Rauschenberg invented a new term in the art world: “combine”. This fusion of sculpture and painting became his signature, as many of his works featured this new style which basically helped invent the term “pop art”, which has been mostly associated with Andy Warhol.

In this vernacular of this type of artwork, different kinds of materials can be used, such as newspaper clippings, paints squeezed directly from the tube or various wooden, metal, or plastic parts put together into one whole artwork. 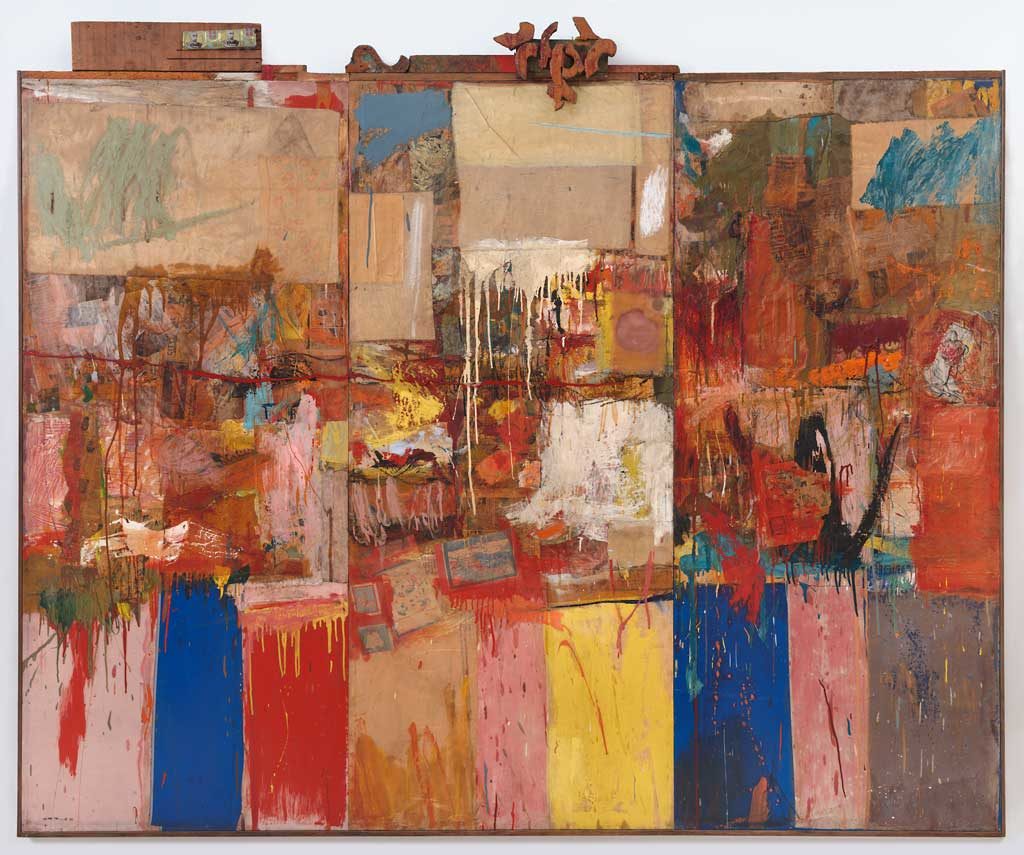 According to art historians, Rauschenberg wanted to bring simple objects from daily life into the artwork, showing that artists and their works are part of the same world, they are the same regular human beings as non-artists, interacting with the same “stuff”.  This may have influenced Warhol to film people eating hamburgers – we don’t know.

Art critics and researchers tend to think that Rauschenberg gave a sort of cultural permission to creators to create whatever and how they want – a dangerous idea to be sure.

Throughout his sixty active working years as an artist, Rauschenberg had created many works from all different kinds of materials, many of which challenged viewers as to what art is and is not, and what it may or may not include.

Once he said that he used to go out in New York streets looking for various objects which can be useful for his artworks. From pins to waterpipes – his work materials included a wide range of objects, newspapers, paint, pictures, and even stuffed animals.  Maybe even his own band-aids…one never knows with this fellow which might end up being sucked into the work.

In his paintings or sculptures, Rauschenberg did not avoid using such American symbols as a national flag or public figures such as the former president of the United States, John F. Kennedy.  His work was, in its own way, controversial to some, just by including certain symbols and images.  Imagine Rauschenberg trying to work in the year 2020…would be tough, with Cancel Culture seemingly on the rise.

However, it should be said that the main objects in his works remained simple, mostly from the home surroundings such as furniture, car wheels, or simple beach umbrellas.  Ordinary everyday things.

Ever since Rauschenberg started to develop his artistic ideas and create his works, he was never quite sure of his end point, but he definitely knew who he does not want to be: an Abstract Expressionist.

He decided to be different and expand boundaries of art as it was popular at that time. No doubt it was brave to create works which cannot fit in any concept of art.

In 1953 Rauschenberg had created probably the most controversial of his works. He took one of the most popular artists in New York, a Willem de Kooning painting, and started to erase it. 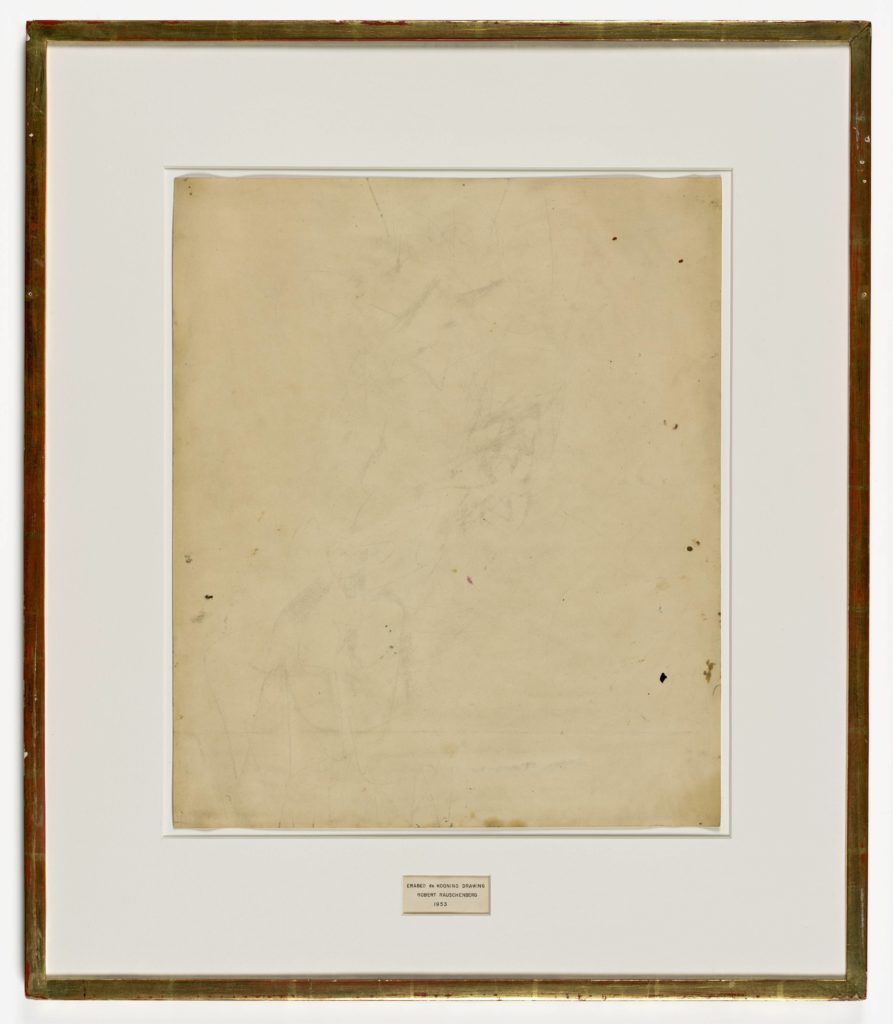 The process took two months and yet the drawing was not erased fully, Rauschenberg had achieved his goal. Later he described this act not as a negation, but as a celebration.

After long years of creating his artworks, at the age of 72, Rauschenberg shared that working and creating always gave him joy, a celebration of unity with everything, and being the least self-conscious he could be.

Although Rauschenberg’s artworks are controversial, he remained authentic and showed what real freedom in the art world looks like. Today his works are exhibited in the most popular modern art museums all over the world.