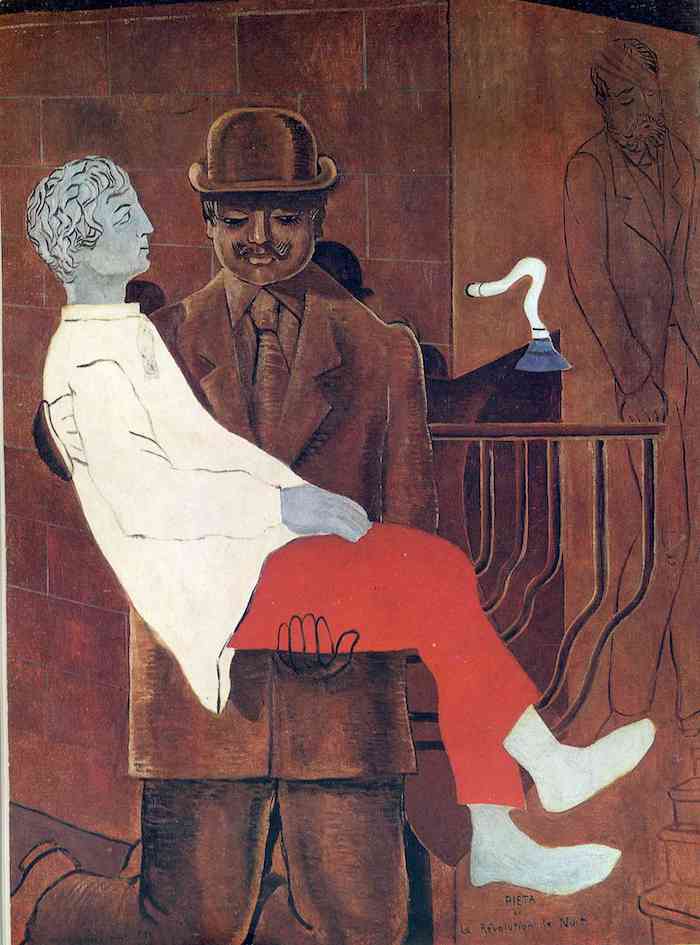 Painting is not for me either decorative amusement, or the plastic invention of felt reality; it must be every time: invention, discovery, revelation. – M. Ernst

Dadaism was a movement of the grotesque, absurdity, and an expression of the modern world meaninglessness. Not only paintings, sculptures, and poems artworks, but the life of artists was an artwork itself. 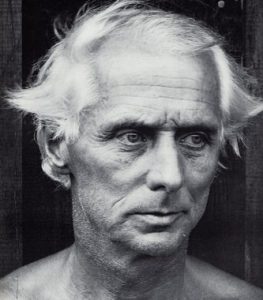 Maximilian Maria Ernst was born in 1891 in Bruhl, Germany as the third of nine children in a strict middle-class Catholic family. His parents were devoted Christians who were raising their children to be religious, God-fearing and capable individuals.

His father was an amateur painter and he introduced painting to Max at an early age, which will further determine his life path.

Philosophy, psychology, and psychiatry were areas that first interested him, so he went to study it at the University of Bonn. 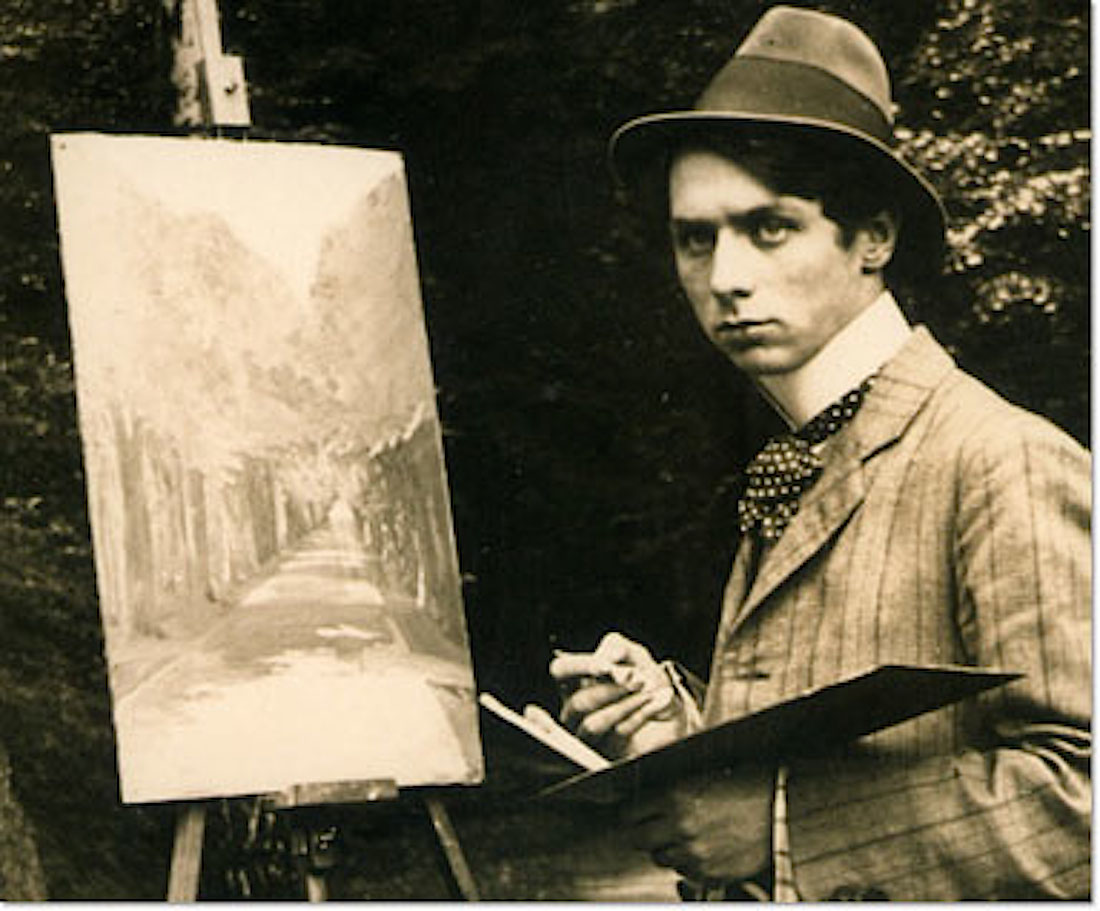 He was visiting asylums and got fascinated with the artwork of mentally ill people. But he abandoned this studies because he realized that he had more interests in the arts, claiming that his interests included anything connected to painting.

His love for painting was the main reason he decided to dedicate his life to it.

In the earliest days of his painting career, he met works of the most famous artists of all time, such as Van Gogh, Gauguin, Monet, Cezzane and Picasso, who influenced Ernst’s further work. 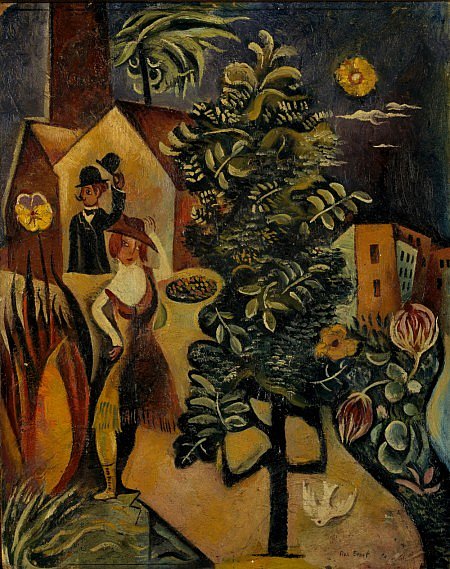 His favorite themes were fantasy and dreams, and he adopted an ironic style that juxtaposed grotesque elements alongside Cubist and Expressionist motifs.

After finishing his studies, Ernst was forced to join the German Army in World War I as a part of the artillery unit, so he was directly exposed to the drama of warfare.

The war was ruinous for this young soldier, but inspiring for him as an artist. He became highly critical of western culture and these charged emotions directly fed into his vision of the world as irrational – an idea that became the basis of his artwork.

Memories of the war and his childhood helped him create absurd, but interesting scenes in his artworks. In 1918, after returning from the war, he took painting seriously. 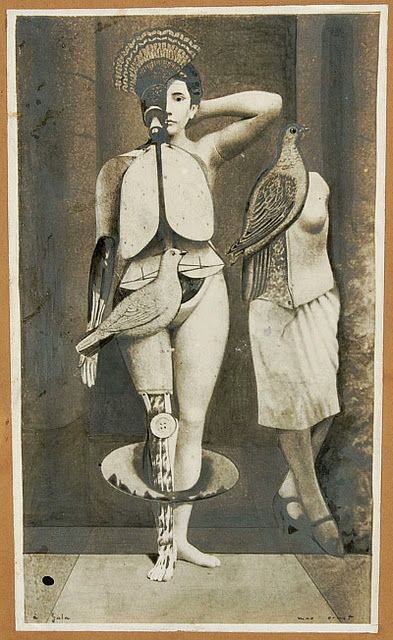 With Jean Arp, a poet and an artist whom he met before having to go to war, he formed a group of Dada artists in Cologne.

They edited journals and created a scandal by organizing a Dada exhibit in a public restroom. More important are his collages and photomontages he started making in 1919.

His collages represent an important phase of Dadaist art.

He was using different materials in creating collages, such as illustrated catalogs, photographs of various animals, drawings etc, which resulted in creating somewhat futuristic images.

One of these compositions is Here everything is still floating (1920), a startlingly illogical composition made of cutout photographs of insects, fish and anatomical drawings ingeniously arranged to suggest the multiple identities of the things represented. 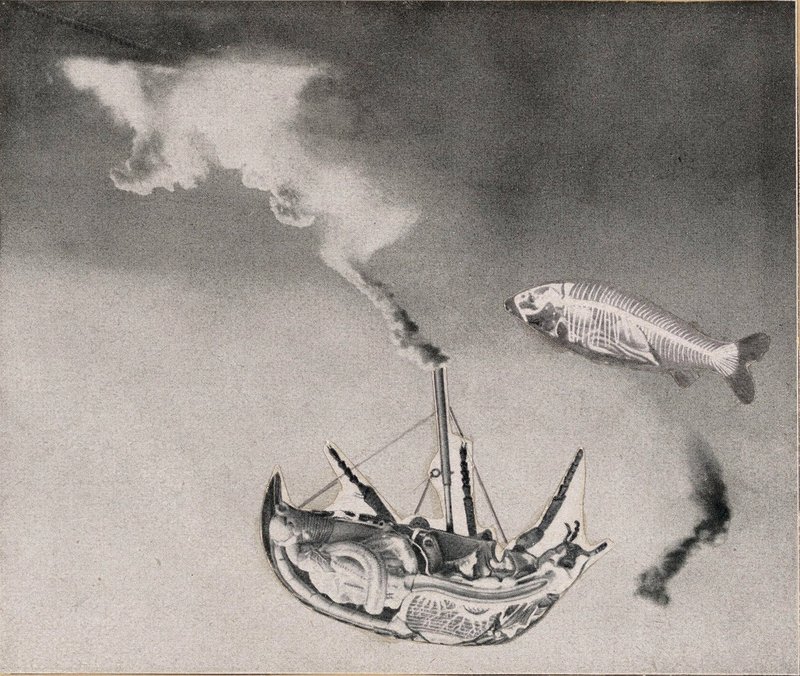 He approached descriptive expression with his collages. Besides that, a three-dimensional spatial perspective and dreaming illusionism of Giorgio de Chirico heavily influenced his work.

Adjustment to his take on Chirico’s style moved him away from Arp’s plain drawings and provided a transition that later became an illusionist branch of surrealist painting.

Arp’s and Ernst’s attempts to reach “beyond painting” – Arp with his low, painted and machine-cut reliefs, and Ernst with his collages – don’t represent an attempt of anti-art, as much as a response to feeling that the pre-war art was too hermetic and aesthetic.

Their work made a base for painting-poetry that lived through Dadaism and inspired quarter century of Surrealism. 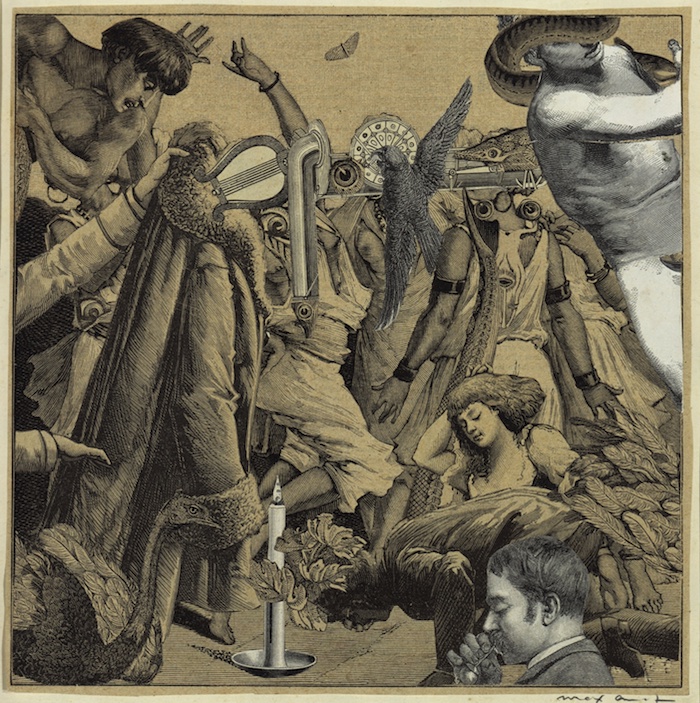 Ernst’s unique masterpieces enabled him to create his own world of dreams and fantasy, which helped him to heal his personal issues and trauma.

In the 1920s, Surrealism occurred.

In 1922, Ernst moved to Paris where he became a founding member of the Surrealists, the group that gathered artists and writers whose work outgrew from the unconscious.

In 1923, Ernst finished his Men Shall Know Nothing of This, known as the first surrealist painting. 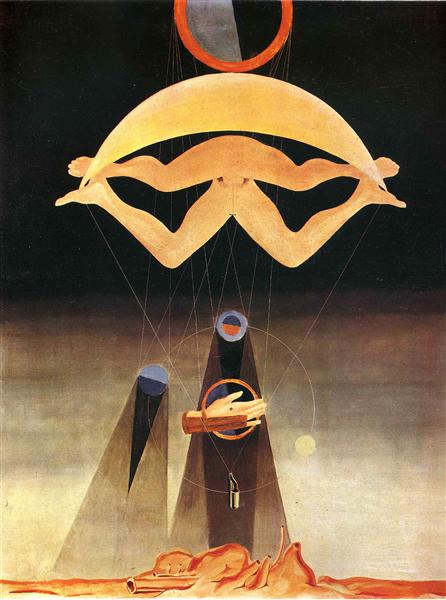 He was one of the first artists to apply The Interpretation of Dreams by Freud to investigate his deep psyche to explore the source of his own creativity. 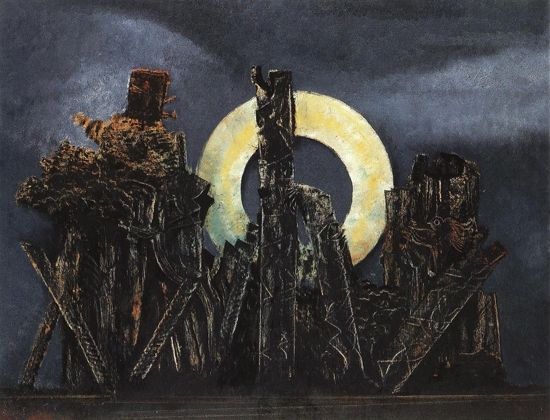 In 1929, he started using techniques of decalcomania – transferring paint from one surface to another by pressing the two surfaces together, and frottage – pencil rubbings of the things such as wood grain, fabric or leaves, to stimulate the flow of imagery from his unconscious mind. 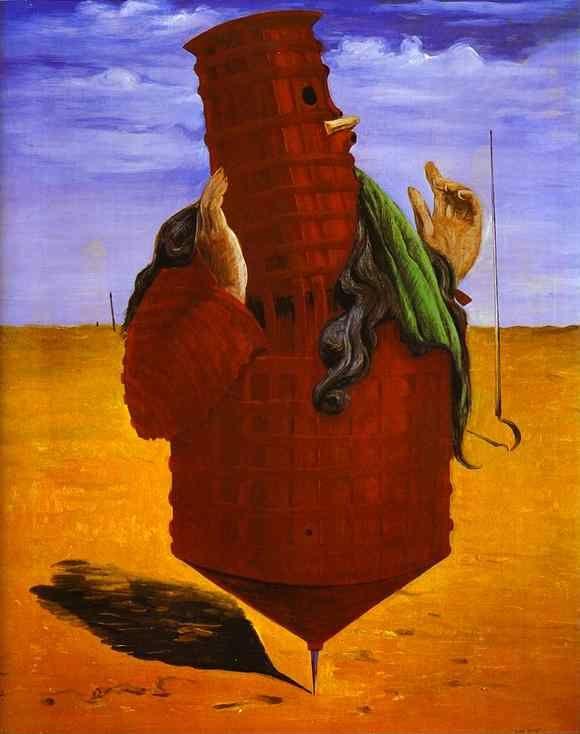 These techniques resulted with the accidental patterns and textures that made the artist contemplating free association to suggest images he subsequently used in a series of drawings (Histoire naturelle, 1926) as well in many paintings such as The Great Forest (1927) and The Temptation of St. Anthony (1945).

Ernst gained quite a reputation despite his strange style. 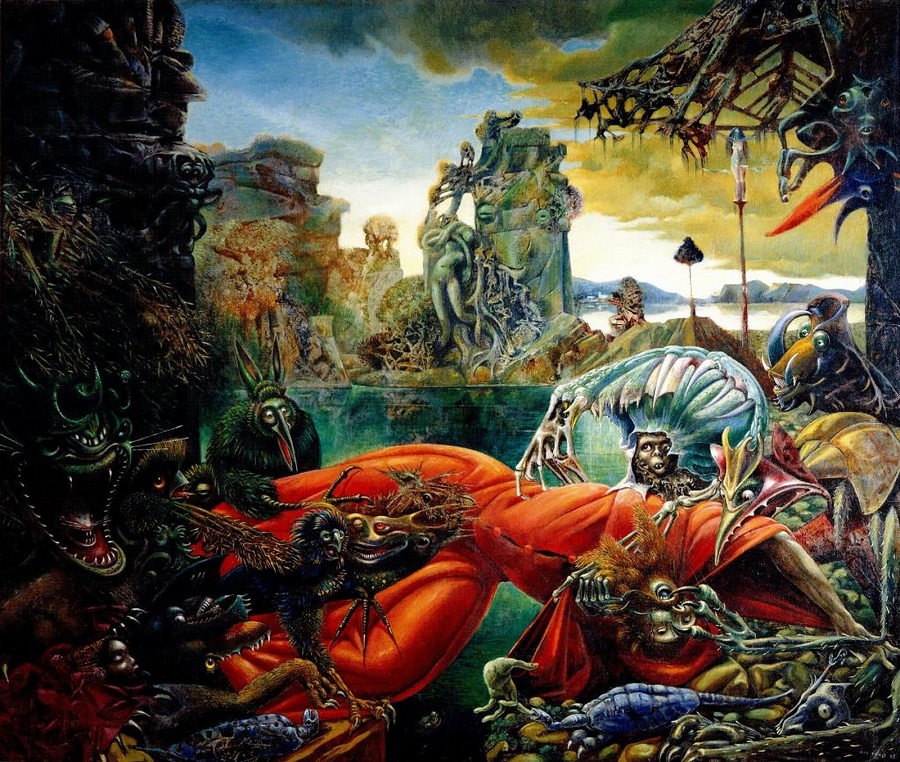 Also in 1929, he turned to collage again and created The Woman with 100 heads, which represents his first collage novel.

Not long after, he created the collage novels A Little Girl Dreams of Taking the Veil (1930) and A Week of Kindness (1934).

After 1934, his attention was oriented towards sculpture, where he was using improvised techniques just as he did in painting. 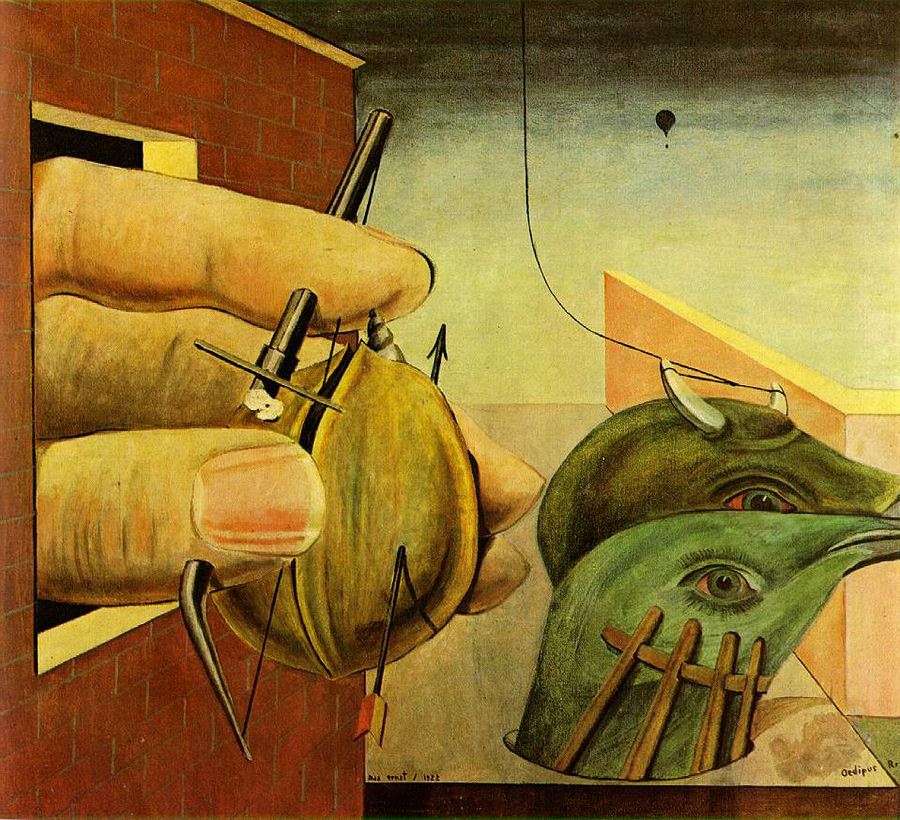 For example, Oedipus II (1934) was cast from a stack of precariously balanced wooden pails to form a belligerent-looking phallic image.

Moving to the United States

At the beginning of World War II, Ernst moved to the United States. There he joined his third wife Peggy Guggenheim, who helped him to break through American art scene, and his son, American painter Jimmy Ernst. 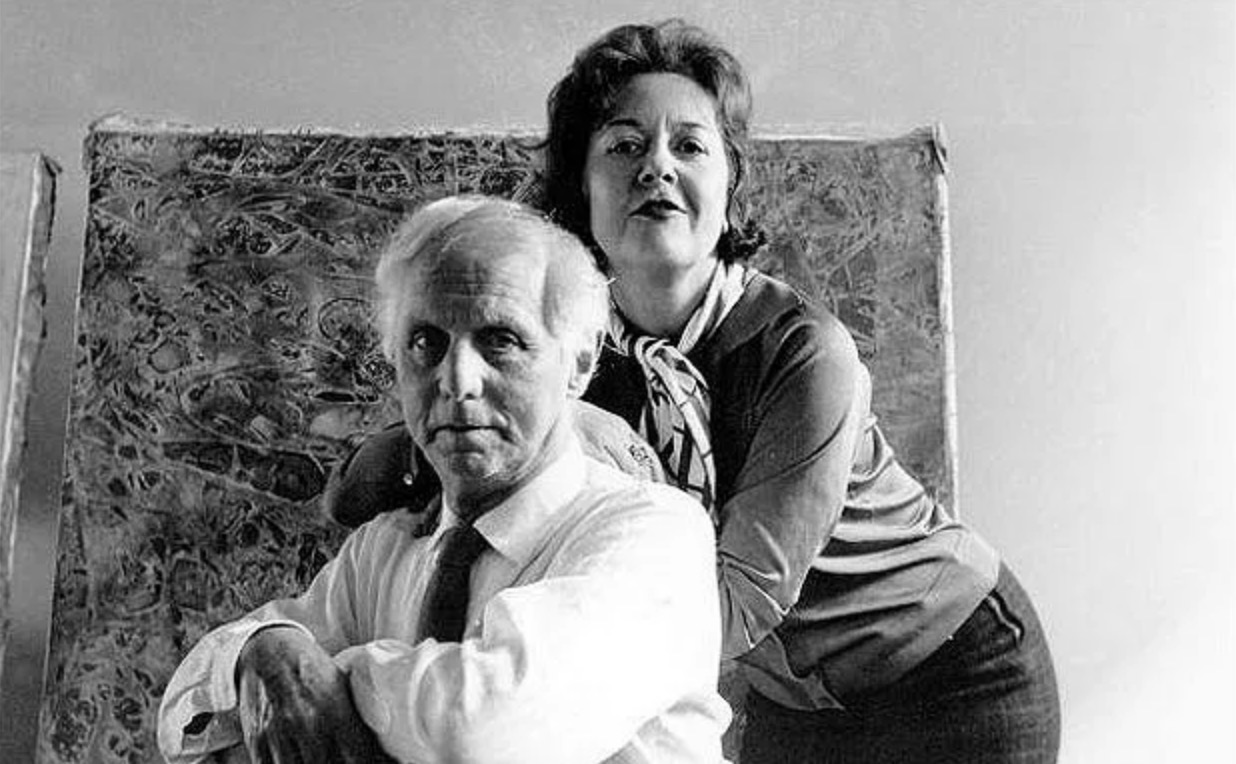 While living there, he concentrated on sculptures such as The King Playing with the Queen (1944), which shows the influence that African culture made on him. 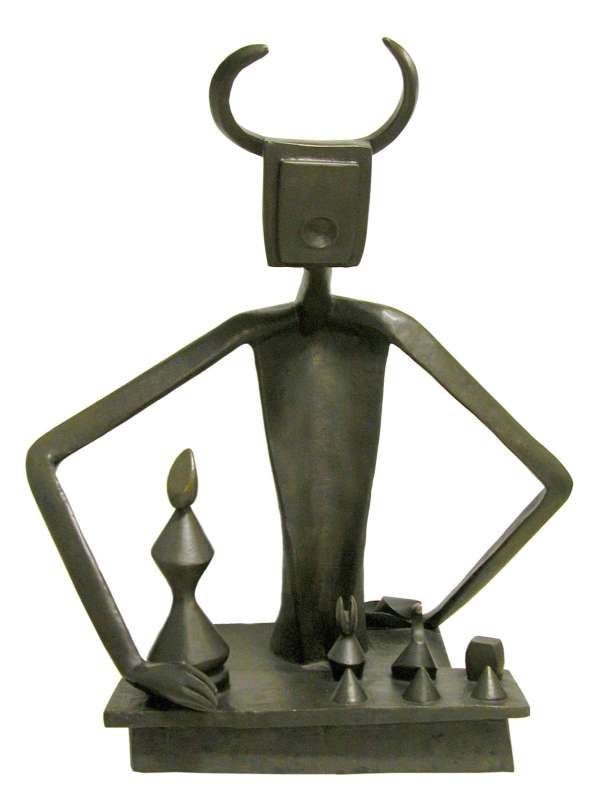 He helped to form American art during the middle of the twentieth century, thanks to his ingenious and extraordinary ideas that were different from those of other artists of that time.

Ernst’s obvious denial of conventional styles and imageries in painting was what fascinated American artists.

New and innovative ways of painting interested young American artists, so this unique style of Ernst gained the attention of painters who became familiar with his work.

In his later years, he divorced Guggenheim and married Dorothea Tanning, a surrealist painter who lived in Sedona, Arizona.

They were traveling to various places to learn more about different art techniques. The couple settled in France in 1953. A year after, Ernst received the Grand Prize at the Venice Biennale, a prestigious awards contest.

Max Ernst died in 1976, in Paris, only a day before his 85th birthday. His legacy lived on as he was inspiring artists throughout the world.