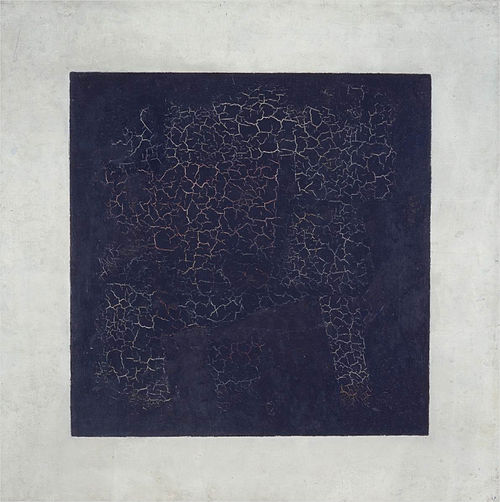 I reduced painting to its logical conclusion and exhibited three canvases: red, blue and yellow. I affirmed: this is the end of painting.

Suprematism still remains one of the most radical projects and movements in modern art, a first one of pure geometrical abstraction in painting.

Its name reflects Malevich’s belief that Suprematist art would lead to the supremacy of pure feeling and perception in the pictorial art and be superior to all art in the past. The Russian Formalists, highly influential group of literary critics, were strongly opposed to the idea that language is a mere and transparent instrument for communication.

They pointed out that words were not easily linked to the objects they denoted; the art could serve to make the world fresh and strange and could make us observe the world from different perspectives.

Kazimir Malevich came to be intrigued by the search for art’s essentials just as the critics and poets were interested in what constituted literature.

According to his believe, there were only delicate links between signs or words and the objects they denote; from that point he saw the possibilities for an absolute abstract art.

Suprematist’s abstract painting was aimed at doing much the same, by removing the real world entirely. The Suprematist’s first hints emerged in background and costume sketches that Malevich designed for a Futurist opera Victory Over the Sun, performed in St. Petersburg in 1913.

The piece was written in the behind-the-mind language of ‘ZAUM’ invented by the poets Velimir Khlebnikov and Alexi Kruchonyck. Malevich’s contribution was more conservative: costumes for the actors and some cubo-futurist stage settings.

The sketch for the backdrop of Act2, Scene5 named Study for Décor of Victory Over the Sun (1913), foreshadows the development of Suprematism in its use of a geometric motif.

The drawings still had a clear reference to Cubo-Futurism, but the simple shapes, a visual foundation for Suprematism, appeared repeatedly; rich colors were discarded in favor of black and white. Cubist method was joined to ‘relativity’ and a new form brought to life.

Just as Futurism aimed at a total renewal of Russian culture, so Suprematism claimed to supersede all art movements that had gone before it.

This design for opera marked a major break with theatrical convention, since they were neither decorative nor did they illustrate a realistic scenes, such as a room or a landscape.

The movement was greeted with enthusiasm. It represented the first decisive break with Western painting tradition- a new form for a new revolutionary society.

Developed during the time preceding the Russian Revolution, Suprematism believed art to be capable of a tremendous catalytic power.

The short span of time in which the October Revolution of 1917 also opened up new possibilities for avant-garde experiments in Russian art brought forth a tremendous wealth.

Kazimir Malevich considered realism as a distraction from the transcendental experience that the art was meant to evoke.

Suprematism can be seen as the logical conclusions of Cubism’s multiple perspectives and reduced forms and Futurism’s interest in moving.

The Suprematism’s works feature an array of geometric shapes suspended above a light-colored or white background.

The variety of shapes, angles and sizes creates a sense of depth in these compositions, making these appear to be moving in space.

The Black Square (1915), once described as Malevich’s’ living royal infant’ has usually seen as a major landmark in the history of abstract art, a point of beginning and a point of ending.

Between 1915 and 1930s Malevich’ would paint four versions of it. It is said that the last version was carried behind his coffin during his funeral.

This work, a first version depicts a purely black square against a thin border of white, obscuring any sense of normal perspective or space. The square- the face of a new art, became a figurehead and represented the birth of a new movement. It rallied artists and critics in support of the new style, but many others accused it of nihilism.

Alexandre Benois, an artist and critic, attacked it as a ‘’sermon of nothingness and destruction’’.

Much of what this work once initiated continues to have repercussions to this day; it stands at the beginning of the twentieth century like the gate that Modernism entered through.

For the first time, a single work of art called forth the idea of the ‘end of the painting’

Kasimir Malevich published the Suprematism’s manifesto ‘From Cubism and Futurism to Suprematism in Art’ in 1915. He claimed to have passed beyond the boundaries of reality into a new awareness.

The motifs in Malevich’s paintings constricted to include only the square, circle and rectangle. Sometimes, critics have interpreted these motifs as references to mystical ideas.

Some of Malevich’s pronouncements seem to offer support for this; he said that he had destroyed the ring of the horizon and escaped from the circle of things, but in fact, he scorned symbolism: the motifs were only building blocks, the most fundamental and archetypal elements in painting- the zero of form. The progression of Suprematism was devided into three stages: black, colored and white. The black phase was the ‘zero degree’ of painting, marking the beginnings of the movement.

The colored stage, Dynamic Suprematism, focused of the use of shape and color in order to create the sensation of movement in space, pursued in depth by Alexander Rodchenko, Ilya Chasnik and El Lissitzky.

Eight Red Rectangles from 1915 is an example of the second, more dynamic phase, in which primary colors began to be used.

The ambiguous composition-on the one hand the rectangles can be read as floating in space, as if they were suspended on the wall, on the other hand, they can also be read as objects seen from above.

Later, Malevich criticized this more dynamic phase of Suprematist movement as ‘aerial Suprematism’ since its compositions tended to echo pictures of the earth taken from the skies; in this sense, he departed from his ambitions for a totally abstract and non-objective art.

Olga Rozanova was one of the first artists who applied her own personal interpretation to Suprematism.

Her interest in fabrics led her to focus on textural effects, straying from the primary palette to use more feminine and softer colors.

The piece names Color Painting or Non-Objective Composition from 1917 reveals Rozanova’s ability to employ delicate tonal contrasts; it was a prelude to the style of Mark Rothko. El Lissitzky’s lithograph Beat Whites with the Red Wedge from 1919/20 is one of his well-known works from his Suprematist phase.

It uses shape, positioning and color in keeping with the Suprematist principles, particularly with the dynamic stage of the movement.

The use of pointillist shading and lettering shows the evolution of his personal style. In addition, the poster reveals propagandistic intension in its representation of the struggle between the conservative ‘white’ and revolutionary ‘reds’ in Russia.

The white stage was the culmination of Suprematism, exhibited by Kazimir Malevich during the Tenth State Exhibition: Non-objective Creation and Suprematism in 1919.

Malevich’s painting named White Square on White (1917-18) can be seen as the final stage of his ‘transformation in the zero of the form’; the form has almost literally been reduced to nothing.

The pure white of the canvas has negated any sense of traditional linear perspective, contemplating its ‘infinite’ space. The picture is bled of color, the pure white making it easier to recognize the signs of the artist’s work in the rich paint texture of the white square.

This masterpiece dispensed with form entirely, representing ‘the idea’; it provoked responses from other artists that led to new ventures such as Alexander Rodchenko’s experimentation and exploration of the roles of specific materials in his Black on Black series from 1919.

The movement’s spiritual undertones increasingly defined it, as time went on.

Although these put it in jeopardy following the Russian Revolution in 1917, the tolerant attitude of the early Communists ensured that its influence continued.

However, the attitudes had changed by the late 1920s, and the movement lost much of its popularity at home, especially after being accursed by the Stalinists.

Between 1919 and 1927 Malevich stopped painting altogether; following a long hiatus, he even returned to representational painting. He devoted himself to his theoretical writings.

Malevich’s esoteric concepts precluded the movement itself from gaining widespread appeal, but their implications have been far-reaching in the field of abstract art.

His desire to create a transcendental art is an aspiration one can trace in much later abstract art; for instance, it is present in the ideas Wassily Kandinsky fundamentals in his book Concerning the Spiritual in Art (1912) and the Theosophy-inspired geometric abstraction of Piet Mondrian. The introduction of Suprematism to the West was well-received (exhibition in Berlin, 1927), sparking interest throughout United States and Europe.

El Lissitzky played a key role in the promotion of Suprematism outside of Russia and also used Suprematist concepts and forms to great effect in architecture and graphic design, which helped to establish the Constructivist movement.

Malevich’s achievement remains enigmatic over ninety years after he drew four lines on a two and a half foot square canvas and filled in the resulting area with black paint.

Suprematism became an important point of departure for the art forms of abstraction and geometric reduction; today its connection to a political position seems just as significant as its formal innovation.

As a story of refusal and of failure, Suprematism also became one of the most important reference points for Moscow’s conceptual art from the eighties on.