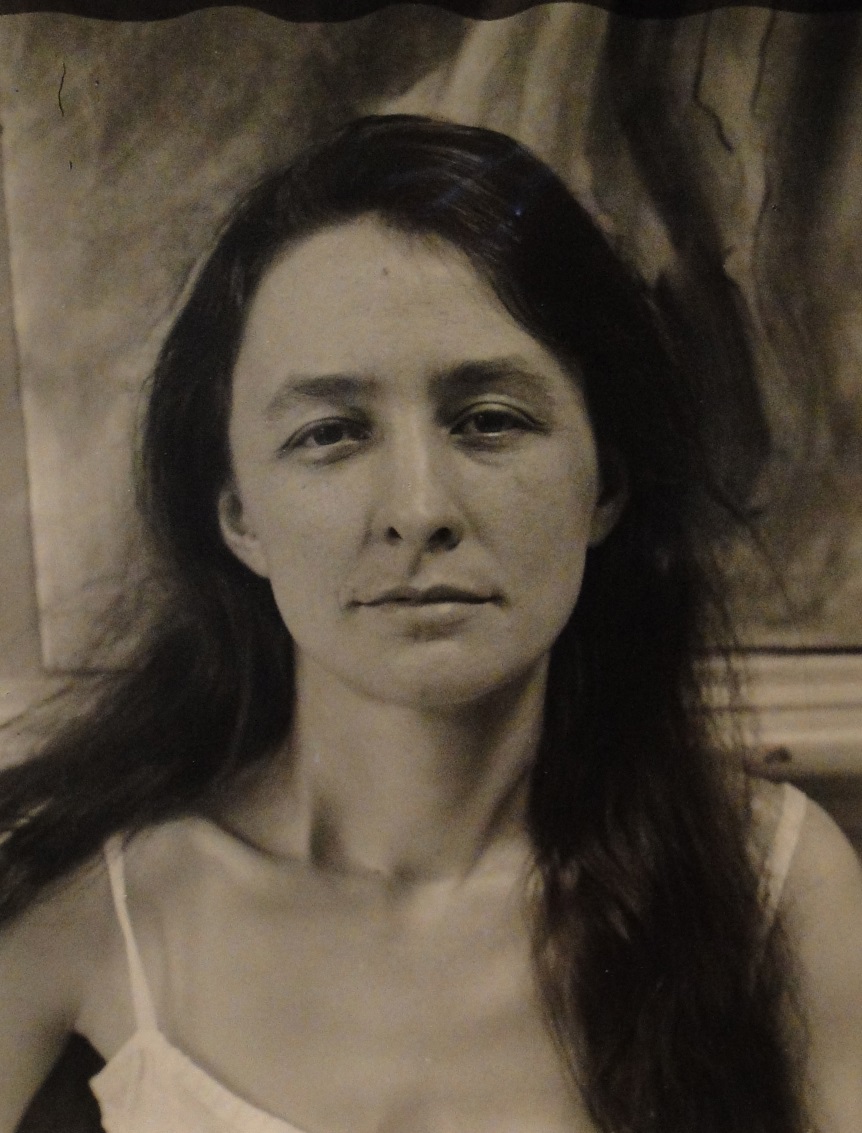 A prolific artist, Georgia O’Keeffe spent 70 years making art and contributing to the development of American modernism ⎯ she produced more than 2000 works over the course of her career. She was a prominent member of the creative Stieglitz circle, influencing early American modernists.

She is notable for her role as a pioneering female artist ⎯ although she disavowed their interpretation of her work ⎯ she was a strong influence on the artists of the Feminist art movement, including Miriam Shapiro and Judy Chicago, who saw feminine imagery in O’Keeffe’s flower paintings. O’Keeffe was born on November, 15, near Sun Prairie, Wisconsin in 1887, as the second of seven children. Her parents grow up together as neighbors; her father Francis Calixtus O’Keeffe was Irish, and her mother Ida Totto was of Dutch and Hungarian heritage.

As a child, O’Keeffe developed a curiosity about the natural world and an early interest in becoming an artist. Art appreciation was a family affair for O’Keeffe: her two grandmothers and two of her sisters also enjoyed painting.

She came from a family where female education was stressed and she was fortunate to attend the School of the Art Institute of Chicago, from 1905 to 1906; in 1907, O’Keefe moved in New York, attended classes at the Art Students League and learn realist painting techniques from art-teachers William Merritt Chase, F.

Luis Mora and Kanyon Cox. In New York, she expanded her ideas about art by visiting galleries, in particular, Gallery 291, owned by photographers Alfred Stieglitz and Edward Steichen. This place was one of the first few places in the United States where European avante-garde art was exhibited.

Georgia O’Keeffe was, for the first time, exposed to popular European artists such as Henri Matisse and Auguste Rodin. Few years later, in 1912, and after attending a drawing class at the University of Virginia’s Summer School, she began focusing on her art. Alon Bement, her teacher, professed an innovative teaching style that was heavily influenced by the artist Wesley Dow, whose approach to composition and design was influenced by the principles of Japanese art.

While teaching at Columbia College in South Carolina in 1915, Georgia O’Keeffe begun experimenting with Dow’s theory of self-exploration (through art); she took natural forms, such as clouds, waves and ferns, and begun a small series of charcoal drawings that simplified them into expressive and abstracted combinations of lines and shapes.

She mailed a few of them to her friend Anita Pollitzer, a former classmate, who brought the drawings to the attention of Alfred Stieglitz in January 1916. Recognizing her potential, Stieglitz exhibited ten of her charcoals at his Gallery 291, and this began their professional relationship.

While O’Keeffe continued to teach, she returned to New York in 1917, to view her first solo exhibition, arranged by Stieglitz at 291. During that time, O’Keeffe and Stieglitz began a love affair that would last until his death.

O’Keeffe incorporated the technique of other artists and was especially influenced by Paul Strand’s use of cropping in his photographs. She was one of the first artists to adopt the method to painting by rendering close-ups uniquely American objects that were highly detailed yet abstract.

While some of these works are highly detailed, in others, she stripped away what she considered the inessential to focus on shape and color.

Blue II, from 1916, is indicative of O’Keeffe’s early monochromatic drawings and watercolors, which evoke the movement of nature through abstract forms. While the curvilinear form in Blue II is reminiscent of a plant form, O’Keeffe was playing the violin that would have been in O’Keeffe’s line of sight as she played.

The intense blue color suggests that she may have been familiar with Wasily Kandinsky’s notion that visual art, like music, should convey emotion through the use of color and line. In 1918, Stieglitz offered to financially support O’Keeffe for one year so that she could live and paint in New York; she took a leave of absence from her teaching position and for the first time dedicated herself solely to making art.

Meanwhile, Stieglitz divorced his first wife and he and Georgia O’Keeffe married in 1924.

As an artist, Stieglitz, who was 23 years older than O’Keeffe, found in her a muse, taking over 300 photographs of her, including both portraits and nudes. As an art dealer, he championed her work and promoted her career.

During the 1920s, Stieglitz introduced O’Keeffe to the Stieglitz Circle, his friends and fellow artists, including John Marin, Paul Strand, Arthur Dove, Marsden Hartley. Georgia O’Keeffe was profoundly influenced by Strand’s photography and the camera’s ability to behave like a magnifying lens, as well as Charles Sheeler’s Precisionism. Following these interests, she began making large-scale paintings of natural forms at close range, and, during this time, also switched from watercolors to oil paint. By the mid-1920s, O’Keeffe was recognized as one of the most significant American artists of the time and her art begun to command high prices.

In one of O’Keeffe’s first large- scale renderings of flower, Petunia No.2.,which represents the beginning of her exploration of a theme that would mark her career, she magnifies the flower’s form to emphasize its shape and color.

Her flowers images often received interpretation that O’Keeffe disagreed with, particularly from feminist critics who saw her paintings as veiled illusion to female genitalia.

For Georgia O’Keeffe, there was no hidden symbolism, just the essence of the flower. In addition, the anatomy of the petunia is incredibly detailed, and O’Keeffe may have been emphasizing the androgyny of the reproductive parts in order to counter the idea that her subject matter was connected to her gender. Around 1929, O’Keeffe fascination with the landscape of New Mexico began, and she became enamoured with New Mexico’s landscape of barren land, vistas and local Navajo culture; works produced from this landscape captured the beauty of the desert, its vast skies, distinctive architectural forms, and bones which she collected in the desert.

O’Keeffe’s eventual purchase of two properties in New Mexico further connected her to the land.

Through the precise rendering of the weathered skull’s surface and sharp edges in Cow’s Skull: Red, White and Blue, from 1931, she captures the essential nature of the skull while also referencing the transience of life.

Isolated on canvas, divorced from its desert context, O’Keeffe uses the cow’s skull and the red, white and blue background to represent both naturalism and nationalism, or the relationship between the American landscape and national identity.

Moreover, the subject could allude to the Dust Bowl and the Great Depression, thereby making an environmental and economic statement; what is clear that O’Keeffe created a memento mori that elevates this relic of the New Mexico desert to the status of an American icon. During the 1930s and 1940s, O’Keeffe’s popularity continued to grow and she was honored with two important retrospectives, in 1943 at the Art Institute of Chicago, and in 1946 at the MoMA, their first retrospective of work by woman.

Georgia O’Keeffe split her time between New York, living with Stieglitz, and painting in New Mexico. From the 1940s on, O’Keeffe’s art was outside the mainstream as she was one of the few artists to adhere to representation in a period when others were exploring non-representation or had abandoned painting altogether.

Back in New York, Stieglitz had begun to mentor Dorothy Norman, a young photographer who later helped manage his gallery, an American Place. The close relationship between Stieglitz and Norman eventually developed into an affair. In his later years, Stieglitz’s health deteriorated and he suffered a fatal stroke on July, 13, 1946, at the age of 83.

O’Keeffe was with him when he died and was the executor of his state.

In 1949, three years after Stiegitz’s death, O’Keeffe moved permanently to New Mexico. During the 1950s, she produced a series of works that featured the architectural forms of her patio wall and door at Abiquiu, one of her two homes near Santa Fe. O’Keeffe’s landscape paintings are similar to her flower paintings in that they often capture the essence of nature as the artist saw it without focusing on the details. In Black Place, Gray and Pink, from 1949, O’Keeffe emphasizes the wide open spaces and emptiness of the landscape around her New Mexico ranch that she purchased in 1940-vistas that are the opposite of her claustrophobic cityscapes.

Her paintings of the area capture the sense of place and her attachment to it. The often surprising reds and pinks of the land in these paintings are accurate renderings of the colorful desert scenery.

Despite waning popularity in the 1950s and 1960s, a retrospective held by the Whitney Museum of American Art in 1970 revived her career and brought her to the attention of a new generation of women in the era of feminism.

O’Keeffe’s subject matter was always inspired by her life and the series Sky above Clouds, from around 1964/65is no exception, as the painting speaks to her many travels in the 1950s and 1960s. While en route to the Far East, she became intrigued by the view of the clouds below the airplane and sought to render this aerial view in paint as if to symbolize her own expanded view of the world. Remarkably, as she was nearly 80 years old at the time, she began stretching enormous canvases nearly 24 feet wide, to capture the expansiveness of the scene. This painting, with its high horizon line and simplified clouds that extend beyond the frame, shows the influence of Eastern landscape painting, which also employs a high horizon line with a broad view of the land.

In her later years, O’Keeffe suffered from macular degeneration and began to lose her eyesight. As a result of her failing vision, she painted her last unassisted oil painting in 1972; her urge to create did not falter.

With the help of assistants, she continued to make art and she wrote the bestselling book Georgia O’Keeffe (1976).

Her last paintings consist of simple abstract lines and shapes and hearken back to her early charcoal drawings.

Georgia O’Keeffe died on March, 6, 1986, in Santa Fe, New Mexico, and her ashes were scattered at Cerro Pedernal, which is depicted in several of her paintings.