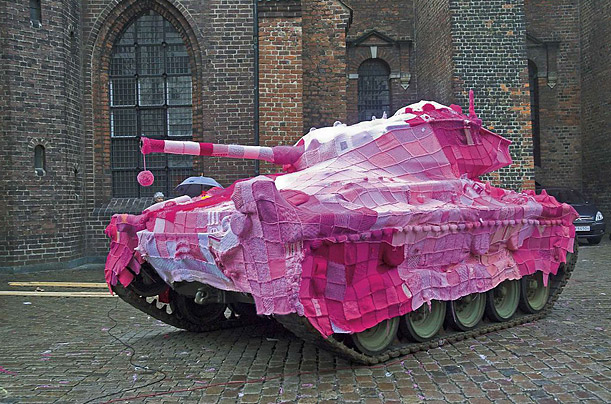 What is Yarn Bombing?

Yarn bombing is part street art, part graffiti, and part activism, which combines the seemingly “cute” and comforting elements of knitting and crocheting, with the revolutionary and mild civil disobedience of graffiti / “tagging” of public objects, in order to make some sort of artistic statement.

Yarn bombing, aka “guerrilla knitting”, can be done to smaller, more innocuous objects like a water pipe or tree branch, highlighting them in some way and making you notice them (whereas you may not have before), or, on the other extreme, it can be done to big things like a bus or stairs, a statue, or even a tank!  Yarn bombing certainly draws attention!

The overall purpose of yarn bombing is to make a statement, by changing the way we look at things. But when did it start?  Let’s take a look! 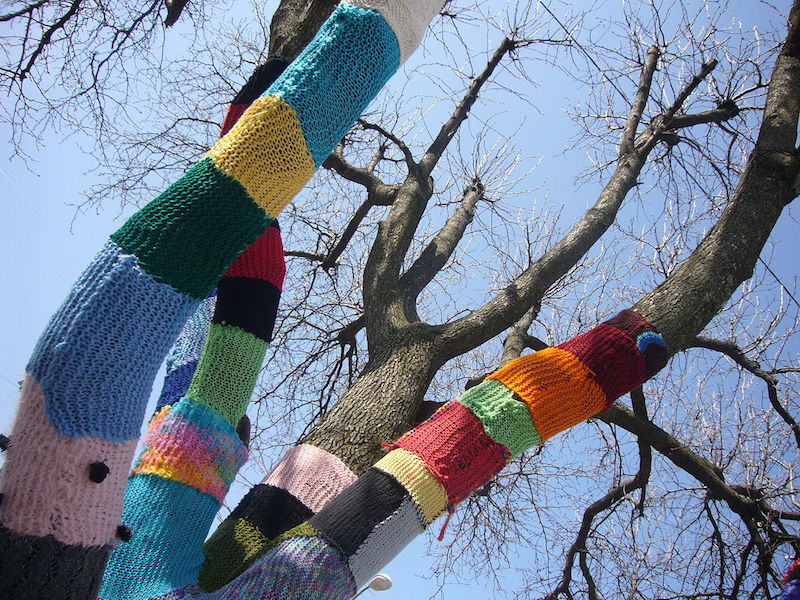 Yarn bombing basically started in 2005 in Houston, USA, when a woman named Magda Sayeg created her first “yarn-bomb” artwork, inadvertently, when she put some knitting over her door knob.

Just a small gesture, but it got the ball (no pun intended) rolling, because people started to notice and give her positive feedback.

Magda would be the first to admit that she didn’t think that her one little knitted door handle would grow to become a movement, that would go on to change her life and be done throughout the world. 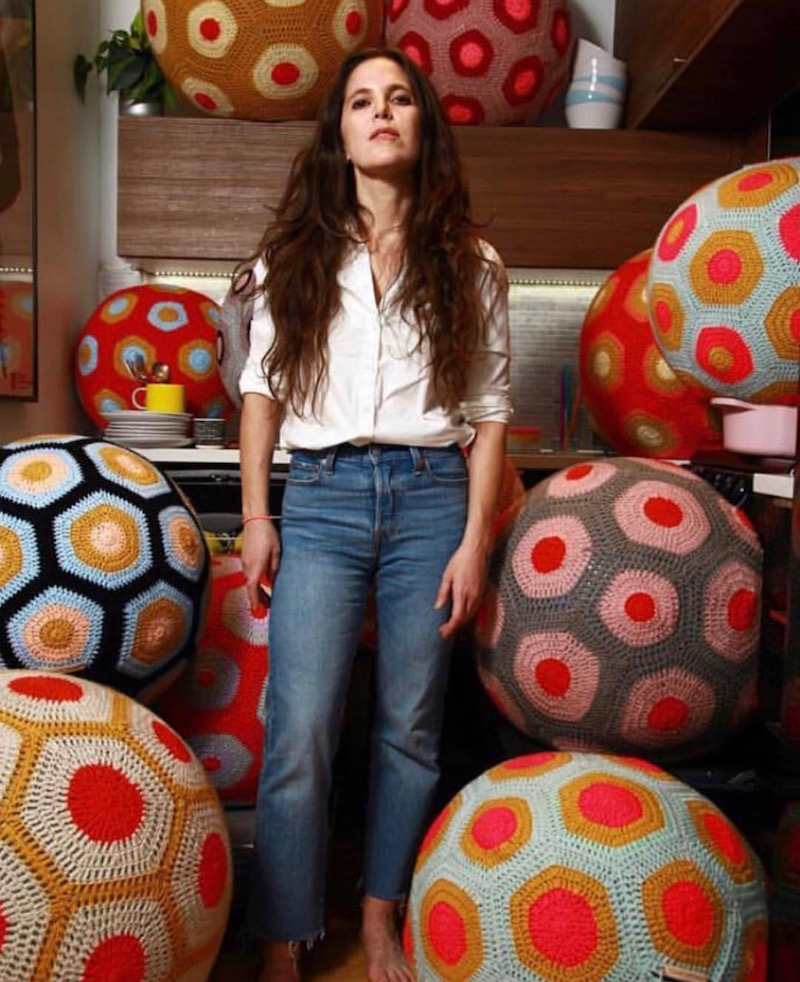 Soon after, she started a group called Knitta Please which is a community of like-minded knitters who like the idea of beautifying public spaces.

But what made her do it in the first place?  The reason why Magda yarn-bombed her door handle was simple – she just wanted to put something warm and cozy-looking on a cold urban material that she sees every day.

When you think about it, this instinct is quite natural, but to some people, it’s a slightly weird idea. People can understand putting a cozy on a teapot, but a doorknob?  Why dress up your doorknob?  Well, why not!

Magda didn’t stop with her doorknob. She decided to go to the public space and wrap the stop sign near her house. No big deal, right?

Well, it caused a public reaction: people not only stopped by to look at it but also started to take pictures of this unique view that they saw.  Was this a joke?  Who would put yarn on a stop sign? 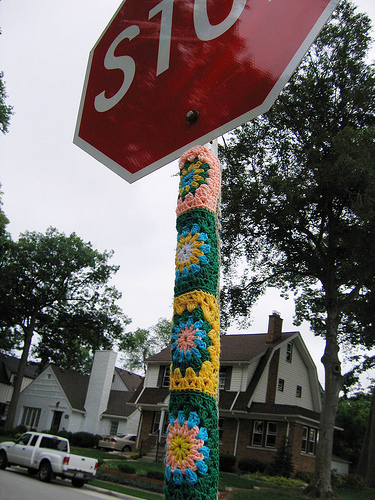 Peoples’ reactions to her new hobby influenced Magda to continue her work by placing her knitting over more and more things, and so the movement began.  Some people didn’t like this, but some did, and that was all it took to start the trend.

Little did the unsuspecting public know that there was a group forming, in the form of Knitta Please, where all the knitters have their own “handles”, based loosely on hip hop and graffiti culture. Names include: Knotorious N.I.T., SonOfaStitch, P-Knitty, PolyCotN, and AKrylik, to name a few. 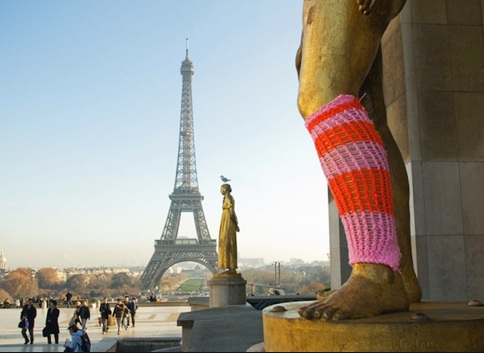 The “bombs” began slowly.  A few poles, and then some trees, and a few other “normal” objects started to get this new “look”, providing them with a positive vibe that people maybe didn’t see before.

Knitta Please grew and grew, and together with Magda’s growing passion, her curiosity what else could be “bombed” grew as well.

They stuck to hip hop conventions, even putting knitted sneakers over telephone lines the way that gangs did it to express their dominance of a given territory, although the prevailing message in this case was a message of niceness, as opposed to aggression. 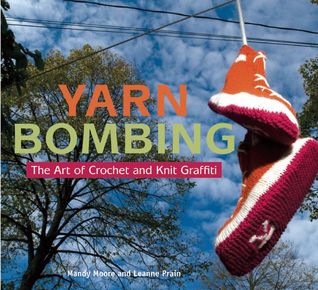 The things these “guerrilla knitters” decided to “dress up” became bigger and bigger, with one big project being the wrapping of a whole bus in Mexico City.

This action gave way to another POV, a new perspective on yarn bombing, and changed her career further because she became known by her artwork to the other people.

Another interesting thing happened after the bus: according to Magda, yarn bombing had stopped belonging to only her, and it became a fully functional art movement across the world.

The more people saw wrapped up things in the public areas, the more started to repeat it by creating their own pieces in different places all around the world. 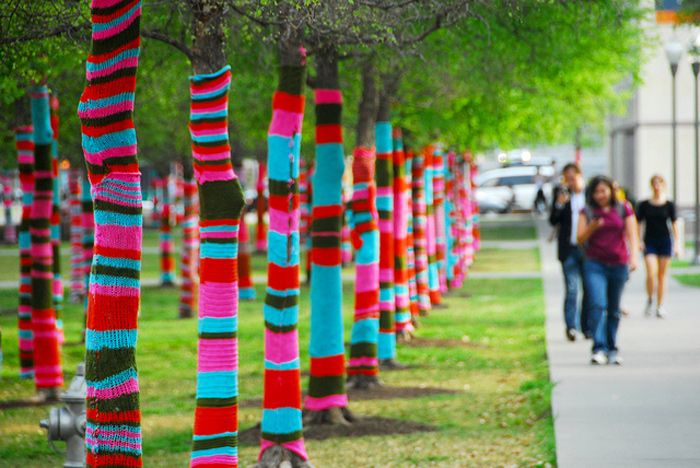 Magda proved that there is no object in the public place, which cannot be yarn bombed. From a door handle at her home to statues, to tanks, to basically *anything*.

Her installations brought joy and gave life to the grey and cold urban environment and that showed that by using imagination, art can be created everywhere and from all kinds of materials.

Since the message of this new type of street art spread through the whole wide world, more and more artists tried to create new and exciting projects by using the yarn bombing technique.

She started to knit when she was thirteen years old, but her perspective on knitting was pretty much traditional, till she saw one girl with a crocheted bag and thought “ohh, that’s cool!”  From there it became more or less an obsession. 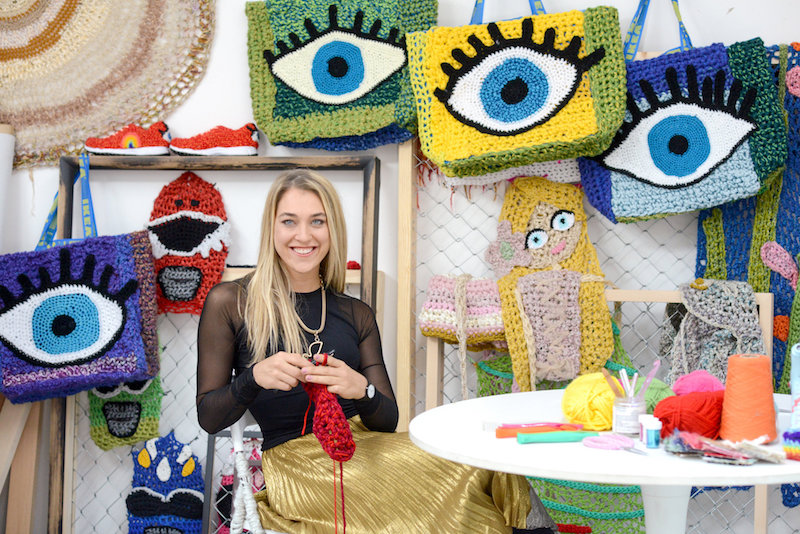 After she put her knitted scarf on a tree for the first time, London got excited and realized that this could be the beginning of something new and important in her life.

She loves to watch people’s reactions to her work and these many positive feelings pushed her to keep creating even more.

The main tool she knits with is a needle printed by 3-D printer. According to Kaye, yarn is a great material for creating art because it is flexible, allowing for stretching and manipulation of shapes, which opens the door for lots of different possibilities.

Started with water pipes and trees, London had created many works for various companies.

She implemented an idea of a crocheted 25-foot-by-50-foot billboard for Miller Lite Beer in Times Square, New York. 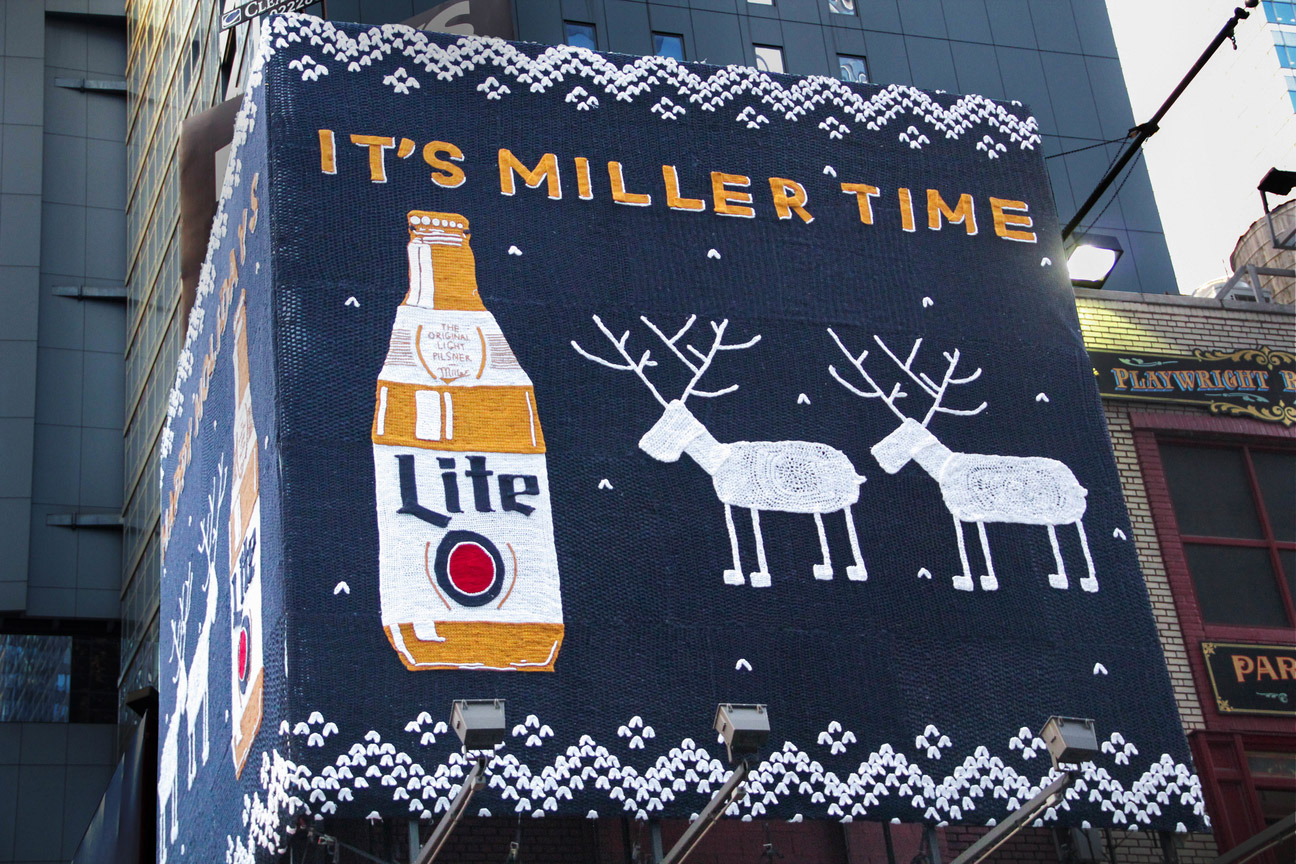 Also, Kaye did some yarn bombing in one of the New York metro trains on Valentine’s day and people’s reaction was generally very friendly – they smiled, took pictures, and said compliments to the artist for her idea.

Kaye’s activities have in and of themselves, inspired many knitters to take up the needles and start knitting. She invited knitters from New York to bring various pieces of knittings, they could all create together.

As a result of this gesture, one big crochet was created and hung on one of the fences in the city. It showed that everyone can try to create something in unison and yarn bombing can help to bring the community together.

Yarn bombing as a political statement

Since the beginning of the yarn bombing, it has brought people together, but it is more than a happy-go-lucky movement.  There is a sense of activism around it.

One of the examples of “political” yarn-bombing is a tank in Dresden, Germany. This idea to do this controversial act was born for Kristina Kroemer, who is a political scientist and owns a fashion design store.

She was interested in Dresden’s history, the city was completely destroyed during WWII, so the war topic was always inseparable from the town. Her cause was, in a nutshell – good vs. evil.

So, she put her knitting on this tank, which was in front of the Military Museum. According to her, after this act, the tank looked rather innocent, almost harmless – creating an anti-military statement. 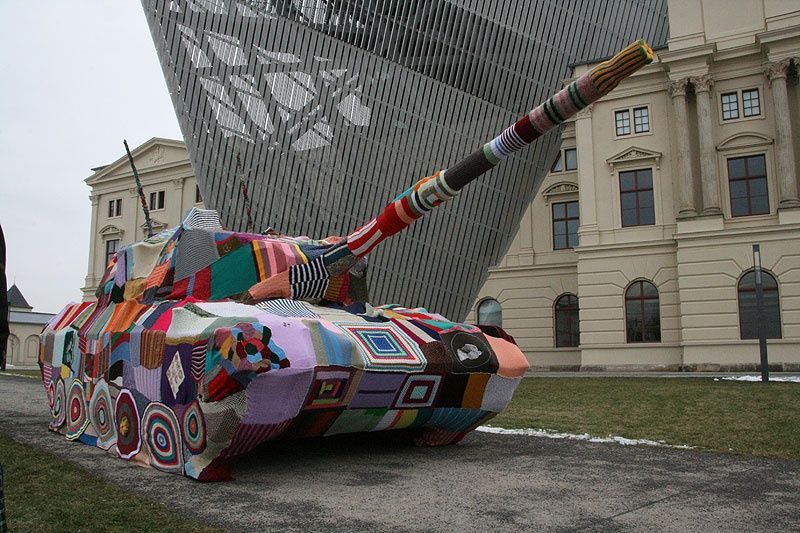 Similar statements had been made about the war in Denmark, the United Kingdom, and New Zealand.

With all kinds of crocheted objects bringing joy and inspiration to people, yarn bombing has spread through many countries and inspired many meaningful movements.

Have you seen any yarn bombs lately?  Leave a comment below!

What is a Flashmob? History and Meaning Behind the Movement

6 thoughts on “What is Yarn Bombing? About the Guerrilla Knitting Art Movement”