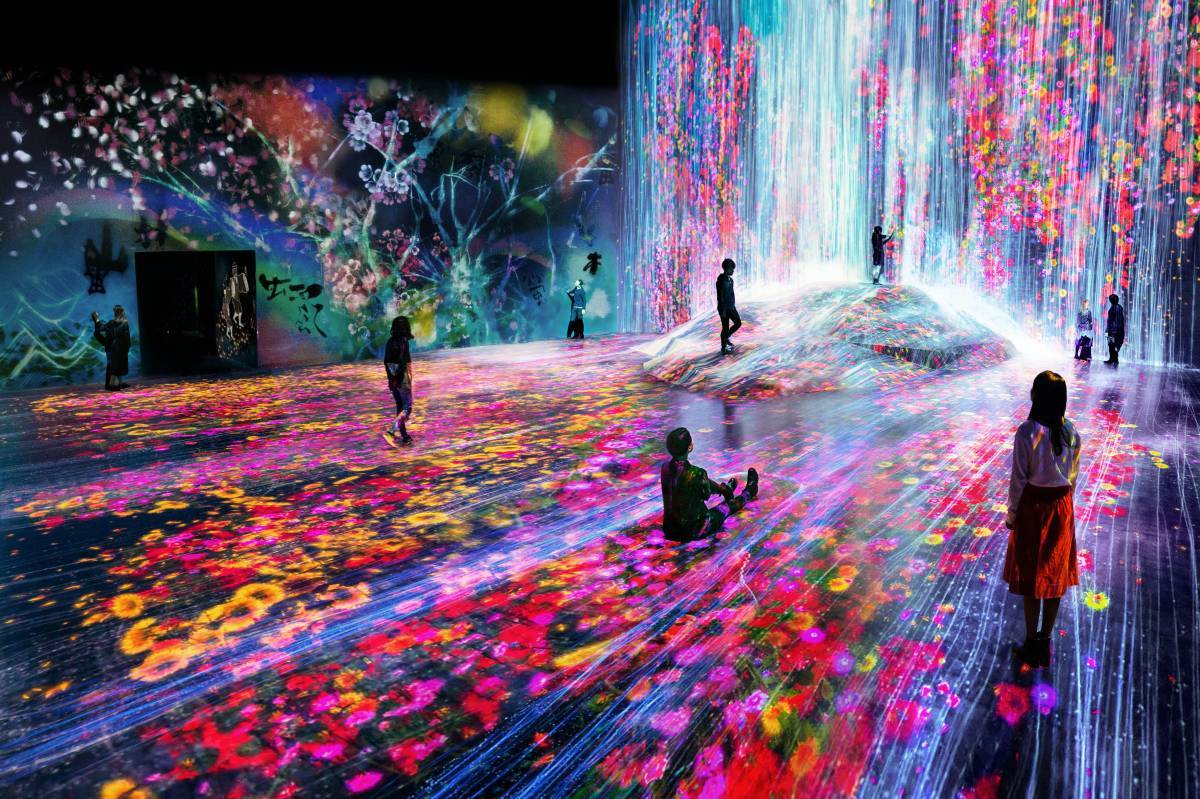 Video projection mapping is an illusory phenomenon created by digitally projecting a computer-manipulated image or images onto a surface (or many) via light and projection system.

This surface chosen to be projected upon can be a flat object, like a wall, either indoor or out, or any other type of surface, although the type of surface will affect the nature of the image.  The projection then changes the nature and meaning of the surface.

Many people might assume this technology might be fairly recent in its invention, dating to the time when cinema originated, but this is not quite so – it goes back much further.

As it happens, this type of visual art, closely related to cinema for obvious reasons, has been known of and practiced for centuries, with a magical effect that has not diminished over time. 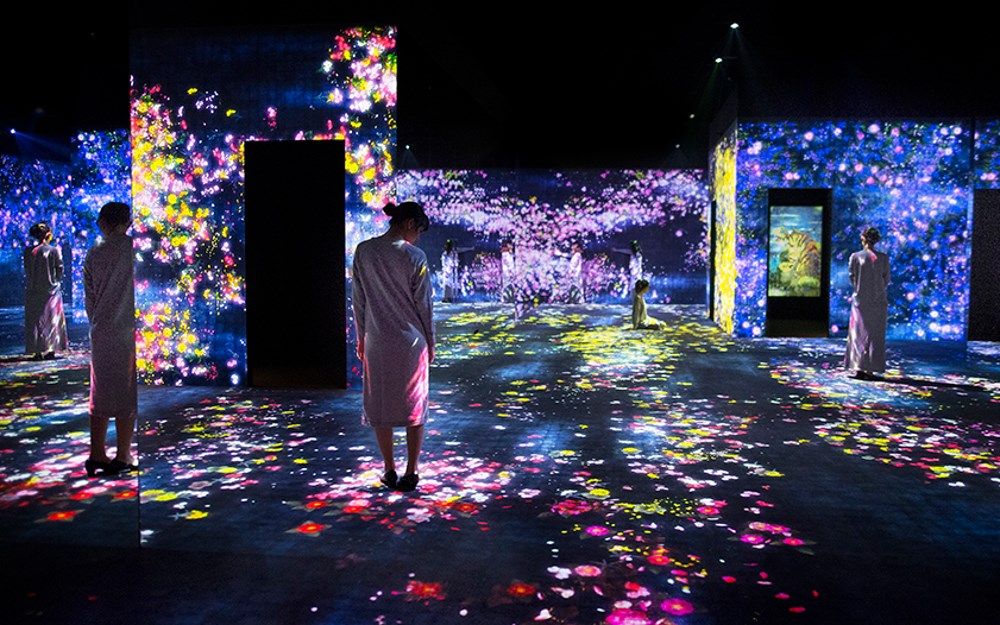 Today it is not only alive with the help of new technologies designed to enhance its overall effect on the viewer, whatever that desired may be, but has reached new levels of ambition and power, where it can be used for a variety of purposes, across all strata, from advertising, to art advocating social change.

It could be said that projection mapping is among the largest and most impressive light displays next to fireworks that brings wonderment to people of all ages and beliefs, although it can also challenge beliefs as well.

But let’s go back to when video projection was born, with a creation known as a ‘magic lantern’…

Before modern technology was created to assist with video projection, a magic lantern was built in 1659 by a Dutch scientist Christian Huygens, 200 years before photography was invented. 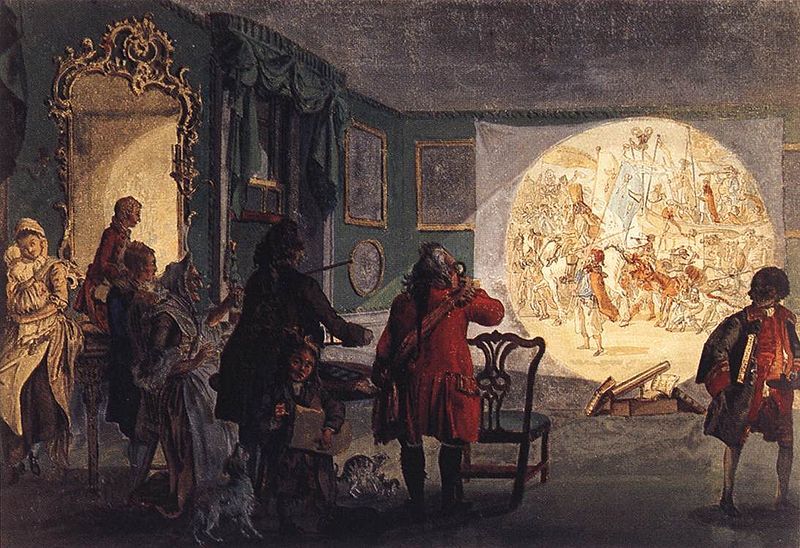 This device worked by using a concave mirror to direct light from a lamp onto a glass slide that had the picture (or more like a slide made of paper).

The light passed through the glass slide and projected the image on a screen using focusing lenses. Magic lanterns were one of the first image-projecting devices to gain popularity in the education and entertainment fields.

Here is a short video showing exactly how magic lanterns worked and look.

Similar devices to the magic lantern were created in later centuries, but the era of projectors, that we know them as now, started around the 1940’s, when the first computers began to be invented.

One of the earliest projectors which became popular during this more modern era was the now well-known slide projectors.

These projectors were used to project transparent photographic slides on the screen.

Light from a source such as an incandescent light bulb or limelight was directed onto the 35mm slides through a condensing lens by using reflectors.

The light passed through the slide onto a focusing lens that projected a large image on the screen. The slides contained family pictures or educational material. Slide projectors became common in educational institutions and private homes.

These days projectors are made to be more high definition. They can show a very high quality of pictures, no matter how large the surface is.

In fact, artists are still often asked to submit their artwork to galleries it the form of slides, so that curators can get a closer look at the finer details of the image, to determine whether it is suitable for a particular gallery’s setting. 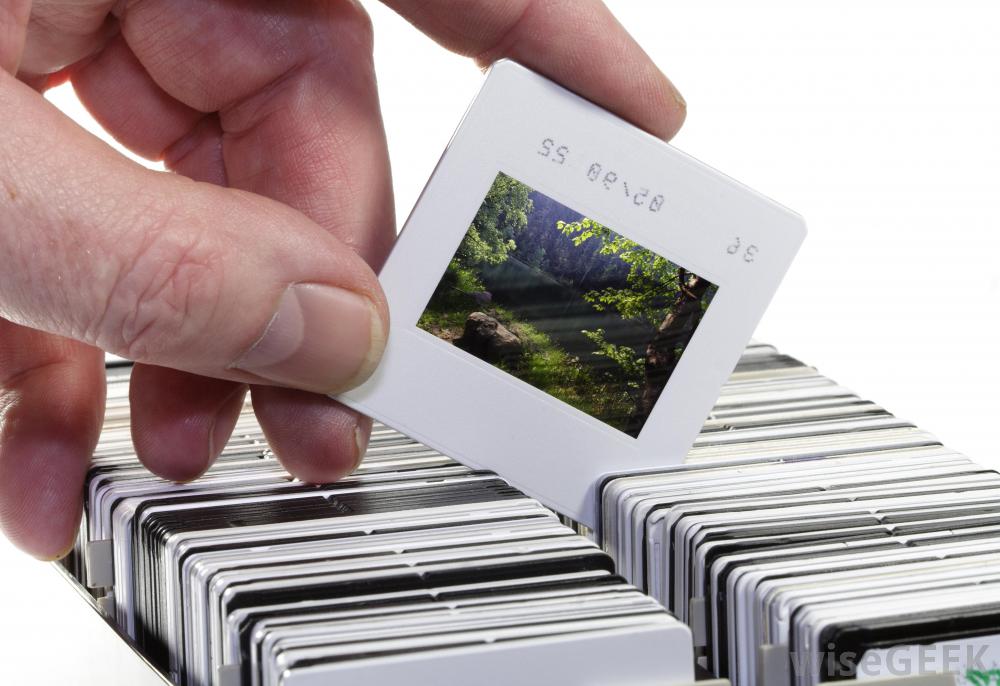 Since modern times became the digital age, images and videos began to be very important not just in the art world, but in people‘s daily life as well. Up next, I want to show how successful ideas were developed by using video mapping.

When you imagine a video projection, most of the time immediately start to think about a classroom and or some big company‘s meeting room.

Despite how useful it is in those places, today various types of multimedia are used for creating a unique experience in way more different spaces.

Many galleries and museums are using video projections to create a more catchy and mesmerizing look of objects or tell interesting stories.

To make a bigger impression, creators cover the whole indoor space with video projection, including walls, floor, and ceiling. It makes people feel like they are a part of the game and they can feel the project even better. 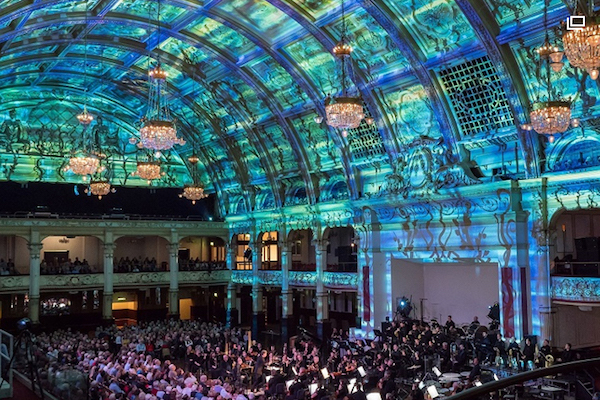 The Mori Building Digital Art Museum – the first digital art museum in the world opened its doors in 2018, in Tokyo, Japan.

This museums provides us with proof of how digital art becomes more and more important in daily life and can be useful for creating attractive and involving content.

Indoor video projection became a great way to tell the story about famous bands or artists. One of those brands is probably the best-known drink in the world – Coca Cola, which created an exhibition to mark its 125th anniversary.

There was a 90 square meter of 270-degree projection system created, in which the company presented a history of the brand and had a great opportunity to promote the brand itself.

The other example shows how new modern technologies can make the art world and paintings alive. A company called “Grande Exhibitions” created an exhibition based on experience, that combines Vincent Van Gogh‘s paintings and special music.

Artworks were projected on huge screens, which created an illusion of being in those artworks. This experience had received a lot of viewers’ attention, visited over 50 cities around the world, and became the most visited multi-sensory experience in the world.

Multimedia and new technologies had created more opportunities to spread various kind words, support, or even critique of the world.

One of the great examples of that is the light show, created by a Swiss artist, during which a video projection of message with the hashtag “hope”, words “thank you” in different languages and flags of many countries were projected on the famous Matterhorn mountain in Switzerland. 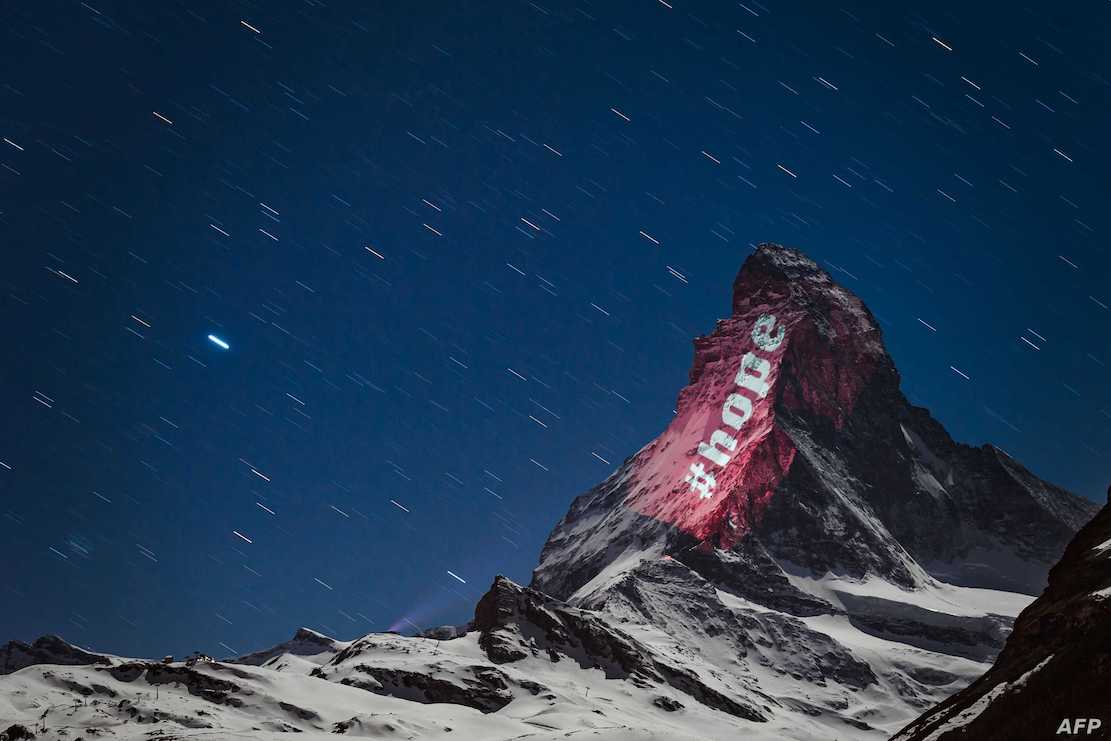 This action was spread through the media and social networks, meanwhile, the author said, that he wanted to show solidarity to people and inspire humans around the world, who are living under the complicated Covid-19 situation.

Video projection has been chosen to create an installation of a huge clock on the building where the government of the United Kingdom resides, so it could count how much time was left for the United Kingdom until leaving European Union on January 31, 2020.

Some artists had chosen to create their works by using video mapping and Krzysztof Wodiczko is one of them.

This polish artist was born in 1943 in Warsaw, Poland. In later years, he moved to Toronto and New York, where had created around 80 various video projections in which covered his social, political, and art ideas. 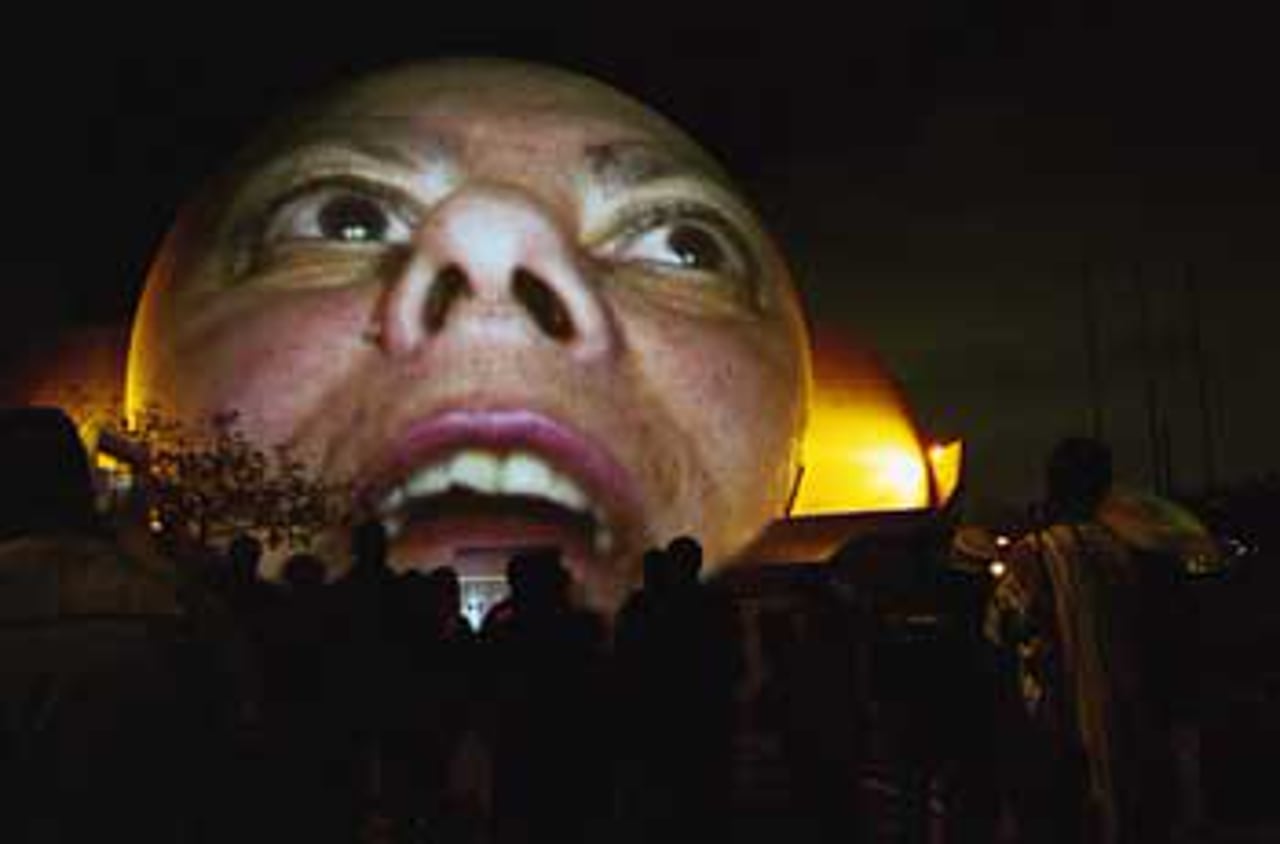 In 1984, when the Cold War was still happening, he projected arms race on the Soldiers and Sailors Memorial Arch, where American and Soviet missiles were connected with a chain and a padlock.

Krzysztof’s idea was to show arms race between both countries, which lasted around four decades since WWII ended.

Next year, in 1985, Wodiczko made a video projection on the South Africa House in London. The event was controversial because the symbol and a flag of Nazis were projected on the building and it caused a diplomatic reaction of the Republic of South Africa because the main idea was to criticize Apartheid‘s policy in this country. With his projects, Krzysztof Wodiczko proved, what a powerful method can be a video projection.

Bigger screens, modern light systems, new computer software – the world is changing very fast, therefore it is exciting what the future of video projection will bring and how the new ideas gonna be realized.

More from My Site

What Is Street Art? Its History, Definition, Purpose, and Importance

What is a Flashmob? History and Meaning Behind the Movement

What is Yarn Bombing? About the Guerrilla Knitting Art Movement