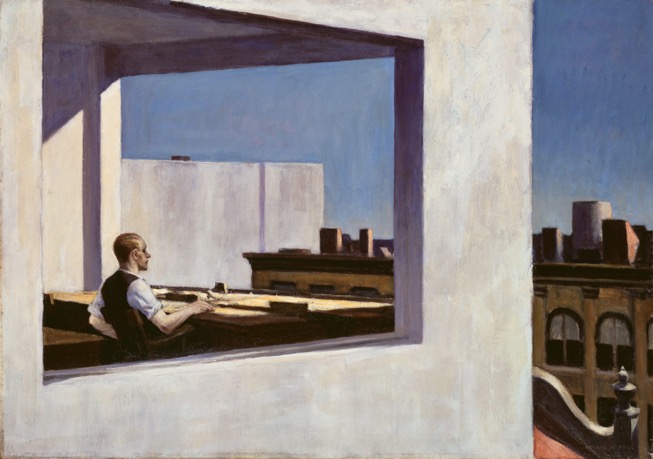 The realist art movement in America during the 20th century was an attempt to bring the real world back into art. Artists set about depicting the contemporary realities of the day, including the activities of ordinary people.

The non-idealized view of the worlds of Hopper, Wyeth, and Segal painted scenes that showed individual’s circumstances often concentrating on feelings of alienation and isolation. Often, these paintings had an overarching melancholic feel that intensified as time went on. Works were set in empty streets, storefronts, and other internal spaces where figures often seemed alienated from the rest of the world.

Settings were both urban and rural landscapes, and were deliberately painted to render this atmosphere of solitude and alienation.

The stillness in the paintings is created in part from the formality of the artists’ chosen styles. The use of hard light and the casting of shadows is emphasized within large solid masses of architecture.

This constructed world accentuates the themes of alienation and isolation the Realists explored.

Hopper was interested in telling the whole truth about a scene and its people. His works set out to depict American society, both urban and rural. City life in America was captured in many of his works, and he adopted common elements of American culture including, gas stations, theatres, restaurants and street scenes.

Some of Hopper’s more famous paintings come from the 1930s and 40s, but the artist still produced strong works in the 1950s and 60s. Summer Evening is a good example of Hopper’s use of everyday scenes, presented with his clear and figurative style. While a couple stand upon a veranda, Hopper gives the painting a sense of isolation.

The viewer looks into a private moment where the couple are not communicating with each other, or with the viewer. Are they breaking up? Are they related? Have they received bad news? This detached viewpoint prevents the viewer form understanding what the couple are thinking or talking about.

Light cast shadows within the pictorial space and highlights the darkness beyond the porch. This lighting also transforms the private space into a public one, where the couple’s intimate moment is seen by anyone close by.

Hopper’s subdued palate and dull aura adds to an overall feeling of isolation in this scene. Nighthawks is one of Hopper’s most famous works and highlights the ideas of isolation and loneliness in an urban night scene. There is no sign of life in the buildings across the road, adding to the sense of loneliness within the frame.

Again the work is subdued in colour palate and the difference between the warm coloured interior and the cooler exterior compounds the sense of loneliness. Viewers look through the glass window that acts as a barrier to the conversation and action within.

There is no door to the outer world of the big city, heightening a sense of isolation within the frame. The quiet conversation that the characters might be engaged in, leaves us outside looking in.

Hopper leaves questions unanswered for the viewer – did the couple arrive together? Did they meet there? What about the man sitting alone? Why is he there so late at night? This ere of mystery has kept many a person guessing, and has contributed to the painting’s fame.

Nighthawks has inspired many artists, including Tom Waits, who provided somewhat of a soundtrack to this kind of lifestyle that Hopper depicts in this work. Hopper is said to have inspired Tom Waits’ “Nighthawks At The Diner” album. Gas Station is another work that has an aura of isolation. This time, the service station is located in a desolate rural landscape. The woods encircle the man and his work. Similar subdued colours are used to heighten the sense of the man’s isolation from the rest of the world.

Lights and shadows also add to the sense of loneliness within the work, and the towering petrol pumps dwarf the only human present. Hopper’s style is clear and figurative. Its formal composition and use of linear perspective underlie the painting’s constructed space.

Light creates shadows across the path while the worker is cast in the shadows, (visually separating him from the rest of the world). Hotel Room exhibits most of the same characteristics, this time within the frame of a hotel room. A sense of aloneness is constructed around a solitary figure reading a book in a large room.

Again the viewer is put in the position of looking at the subject’s world, without any real answers of who she is and why she is there. She sits on the side of her bed in her underwear and alone.

Her suitcases are unpacked and her shoes discarded on the floor. Hopper ties the realist space with the emotion of the scene itself- the sense of desolation experienced by the woman. Strong contrasts of light and shadow stand out and sharply define elements within the room.

Watch this video on Edward Hopper, brought to us by the School Of Life.

Wyeth constructs sentimental, yet meticulously executed compositions. Often his pieces have a timeless character, and indeed do not fit any fixed time period. They could be historic or contemporary, portray the unchanging raw countryside.

Compared to Hopper Wyeth’s work celebrates the simpler life of rural America in a sentimental and nostalgic way. For this reason, Wyeth’s works have a Regionalist overtone that show ordinary people in a rural setting, a common trait of Regionalist works.

Wyeth often used figures with mental or physical disabilities as a metaphor for the harshness of the land that he painted. His works employ large barren landscapes which add a sense of loneliness, isolation to his paintings.

This is enhanced by his cool meticulous attention to detail.

Almost all of Wyeth’s paintings were set in the place that he lived. Wyeth included everyday folk with whom he came in contact, Christina, the gentleman and field hand depicted below all lived within this rural community.

Characteristics of his work: This is perhaps Wyeth’s most famous work and one of the best-know American paintings of the 20th Century. It uses large open spaces set within the rural landscape. Wyeth captures the local landscape of Christina’s world in a realistic sense.

He also captures Christina’s narrative, real woman who was unable to walk because of degenerative muscular disorder. Wyeth painted Christina in several of his works. Here you can see the enormity of Christina’s challenge, with the house painted in the distance and Christina’s frail body isolated from the house with the large field that stretched out in front of her.

Wyeth’s use of a disabled character acts as a metaphor for the harshness of the landscape he has painted. His subdued colours further enhance this feeling of isolation. Field Hand is another painting that is created with a subdued palate that is meticulously executed – note the bark on the tree and the field hand’s clothing and face details. Again Wyeth’s character is physically disabled repeating Wyeth’s metaphor for the harshness of the local landscape.

Bill Hoper was a blacksmith and handyman who wore a hook on one arm, that can be seen lying across the tree trunk. The field hand sits alone amongst the landscape, propped against the tree trunk looking at the vast landscape unfolded before him.

Wyeth once again adopts themes of isolation and alienation so commonly found in realists’ work.

Wyeth’s neighbour is the subject of this work. The artist’s intention was for people to take notice of the quiet unsung heroes in our lives. His subdued colour palate of simple blacks greys and browns help enhance the setting.

Wyeth’s quiet contemplative space captures the man and his quiet meticulous character. This makes the viewer look into a private moment man and to become introspective- what is the man thinking? Where is he? Who is he?

His shoes are carefully placed on paper to stop soil marking the table. Wyeth spoke of how this man mended his own clothes with care, and shows this idea with the scissors hung up correctly on the wall behind.

He was a simple man with great dignity that Wyeth respected. He plays on the word gentleman, as it described his subject well, but also tells how the old man always referred to all objects as” that gentleman”. George Segal was a sculptor who also worked within the realist tradition. He captured the motion of mid-action in his unfinished figures that were minimal in form. Cast from live models initially, Segal’s work is characterised by its unfinished appearance which the artist retains in the final work.

Feelings of loneliness, isolation and sadness are often at the heart of Segal’s sculpture.

His work is confronting to the viewer, capturing often highly personal everyday scenes. He blends the ideas of the real and the dream world he creates, posing the question -What is real? In Depression Bread Line, Segal cast the final sculpture in bronze. Five figures line up to receive whatever food is available in the harsh climate of the Great Depression. The work captures the mid-action of the men waiting to receive their rations. Such queues were frequented by the poor at the time, ready for any handout that they could get.

The five figures are downcast, isolated and awaiting rations. The hunched hatted men’s stature in their old overcoats help to cement the pain and isolation that each character is feeling. These life-sized sculptured figures were cast from friends and family. In this powerful memorial to the victims of the Holocaust, Segal employs his signature plaster cast style to evoke a concentration camp. Again he used friends and family to model the individual sculptural pieces.

The work was inspired by photographs taken at the end of World War II. The work is an artificial scene placed in another everyday location- the Legion of Honor Park, San Francisco. The work partial obscures the view of the Pacific Ocean, but is a poignant reminder of the alienation of people during the Holocaust. Gay Liberation was installed in Greenwich Village, in a park across form the Stonewall Inn. After Police raided the Inn in 1969, angry activists protested and demanded homosexuality be decriminalized. The Stonewall Riot led to the gay liberation movement in the USA and the freedom of same-sex couples to co-exist in public.

Segal had cast the monument in 1979 but stiff opposition by different groups prevented the monument form being place where it is now until 1992. The work is cast once again from Segal’s family and friends, and produced in bronze painted with white lacquer.

The life sized figures are placed on benches within the park, expressing the need to overcome discrimination and prevent alienation and loneliness.