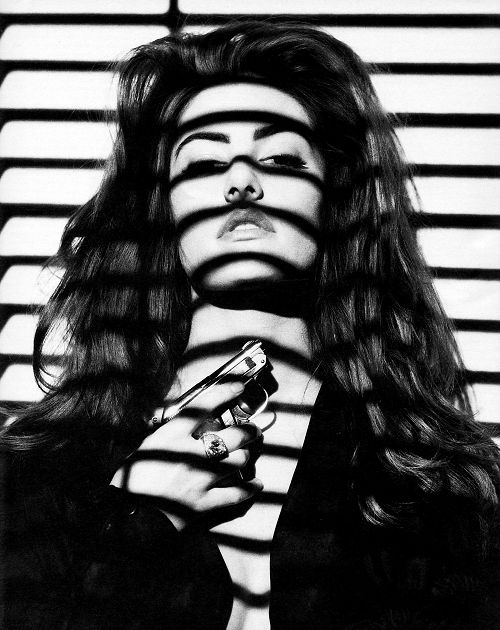 Mädchen Amick is best known for playing Shelly Johnson in Twin Peaks. She was born in Sparks, Nevada on December 12th to Judy and Bill Amick (medical office manager and musician, respectively) in 1970 and has been been an actor since she was 16 years old when she moved to Los Angeles, California to pursue an acting career. Her unusual name, Mädchen, was chosen by her parents who wanted a unique name for their daughter. Mädchen translates from German to ‘girl’. She is also of Norwegian, Swedish, English and Irish descent.

Taking after her father, Amick was naturally talented and drawn to music, and with the encouragement of her parents she learned to play the the piano, bass, violin and guitar. In addition to this, she is trained in a number of dance forms including: tap, ballet, jazz and modern dance.

If you haven’t seen the movie Sleepwalkers, here’s that scene where Mädchen does some fabulous dancing with her broom. Girl can sure bust a move!

She is married to David Alexis and has two children: Sylvester Time Amick-Alexis, and Mina Tobias Amick-Alexis. As well, Amick is an active social media user with accounts on Twitter (@madchenamick) and Instagram (@madchenamick). Before her role on Twin Peaks, Amick appeared as in guest roles on episodes of Baywatch and Star Trek: The Next Generation.

Once Mädchen got on Twin Peaks, her career skyrocketed and took her into another world, basically. Mädchen’s Twin Peaks character Shelly Johnson, who was married to psychopath / vegetable Leo Johnson, was a perky waitress at the Double R Diner in the town of Twin Peaks was a fan favourite character in the show.

Like most of the Twin Peaks girls, she spawned a million nationwide crushes on her Twin Peaks character, who, in Shelly’s case, was a down-to-earth and yet naughty vixen who was married to a maniac, and seeing the high school bad boy on the side. As well, Amick’s role as Shelly really helped her career to get off the ground and Amick considers working with David Lynch as being a paramount part of her career and has since remained good friends with Lynch since working with him.

She considers Lynch to be a very genuine and approachable person, which, by all accounts, he is.

When she took the role of Shelly, it basically involved David asking Mädchen if she wanted to do a show with him, to which she responded “yes”. As the show progressed, David Lynch even managed to write himself (or Gordon Cole, rather) kissing Mädchen (Shelly) into the Twin Peaks script.

In 1990, herself, Sherylin Fenn, and Lara Flynn Boyle appeared on the cover of Rolling Stone magazine to promote Twin Peaks. As Gordon said, Twin Peaks seems to be filled with beautiful women for some reason. Since appearing in Twin Peaks, Mädchen has appeared in a number of TV shows and movies, mostly notably as Alice Cooper in Riverdale (2017-Present), Mrs Ellison in American Horror Story, Wendy Beauchamp in Witches of East End, Sherry Tinsdale in Gilmore Girls and Dutchess Catherine Beaton in Gossip Girl.

In addition to these roles, and others, much like a couple of her her Twin Peaks co-stars (Sherylin Fenn and Dana Ashbrook) , Amick has had a role on Dawson’s Creek. In Dawson’s Creek, Amick plays a characters named Nicole Kennedy. Nicole Kennedy is a recurring character during season 2, and arrives to Dawson’s Creek as a teacher who’s arrived to town after working in Hollywood. Her history piques Dawson’s interest but she has a romance with Dawson’s father. In addition to her television roles, she has appeared in a number of movies. Most notably, she reprised her role as Shelly Johnson for Twin Peak Fire Walk with Me but she has also appeared in the following films: Megan in The Borrower (1991), Sarah Collins in Trapped in Paradise(1994), and Shannon Pace in Priest (2011).

Recently, Amick has been doing interviews, to speak about her excitement to work with her friend, David Lynch, and, to reprise her role as Shelly Johnson once again. Amick never thought that Twin Peaks would see a reboot, denying that she even thought it would be possible to recapture the magic of the first two seasons but was thrilled to learn that when the reboot was announced that it was on Showtime and would give David Lynch and Mark Frost much more creative control and less restrictions than the original run had experience. When she received her lines for the new season of Twin Peaks, she notes that rather than receiving a full script, she only received lines for scenes which she was directly involved in. The only Twin Peaks cast member to receive the full script was Kyle MachLachlan (Special Agent Dale Cooper).

Mädchen was surprised to learn how much has changed for Shelly Johsnon since the original Twin Peaks took place 25 years ago.

Since the original series, Shelly Johnson has given birth to a daughter and is still working at the Double R diner. While she never thought she would return to this role, Mädchen is thrilled for the chance to be playing Shelly Johnson again.

Here’s a touching scene from back in season 2 of Twin Peaks featuring Shelly Johnson and Norma Jennings.

Mädchen Amick maintains her own blog over here, which has tons of interesting info for fans, including her masterclasses (held in L.A.). She also has a Facebook page that she posts on.

You can also find her on Snapchat and Whosay.

I’ll leave you with this music video she directed for her son Sylvester Alexis, aka Sly Beetz. It’s cool to see Mädchen direct a rap video that looks she’s been directing rap videos for years (!?), but it also shows influence from her experience in cinema.