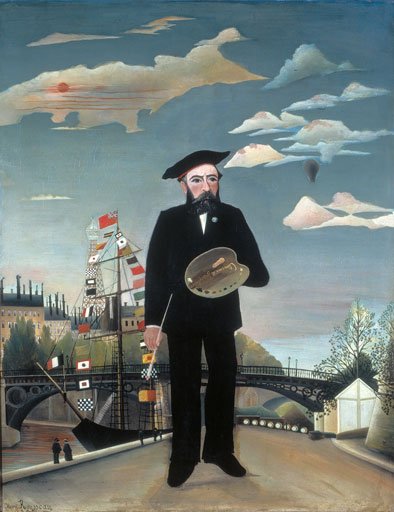 There is a colourful world filled with fabulous details, where everything seems peacefully flying and takes a person back to his childhood, evoking coziest memories. That’s the world of naive art. 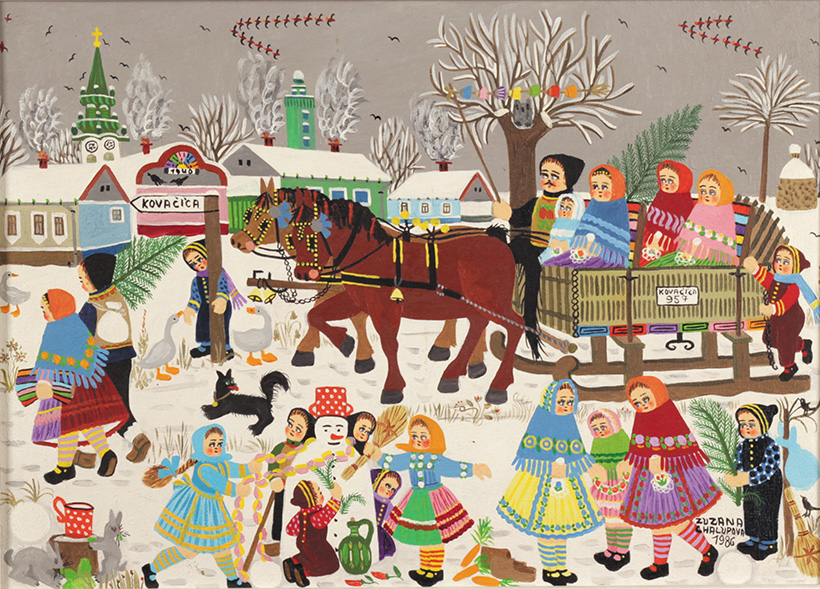 Term naive refers to something that lacks experience, judgment or wisdom, something natural and unaffected, innocent.

In art, it doesn’t change the meaning. Naive art includes almost all of these. Naive artists have no relevant education, they paint without any awareness of anatomy, technique or perspective, and their paintings are simple, vivid, childlike – innocent.

Naive art is any form of visual art created by individuals who lack or reject conventional education and guidance that professional artists receive. It disagrees with dominant trends in art of their time.

These artists shouldn’t be confused with “Sunday artists”, who paint for fun. Also, it’s wrong to take naive artists for those who don’t know what they’re doing. They create with the same passion as educated and well-trained artists, just without formal knowledge of methods.

It is hard to determine when and where this genre exactly originate. End of the 19th and beginning of the 20th century is the time when this genre started getting more attention and appreciation.

The 20th century was a century of experimentation when traditional ways of expression were left aside and artists were experimenting with new ways of seeing the world and were representing it in an original way. 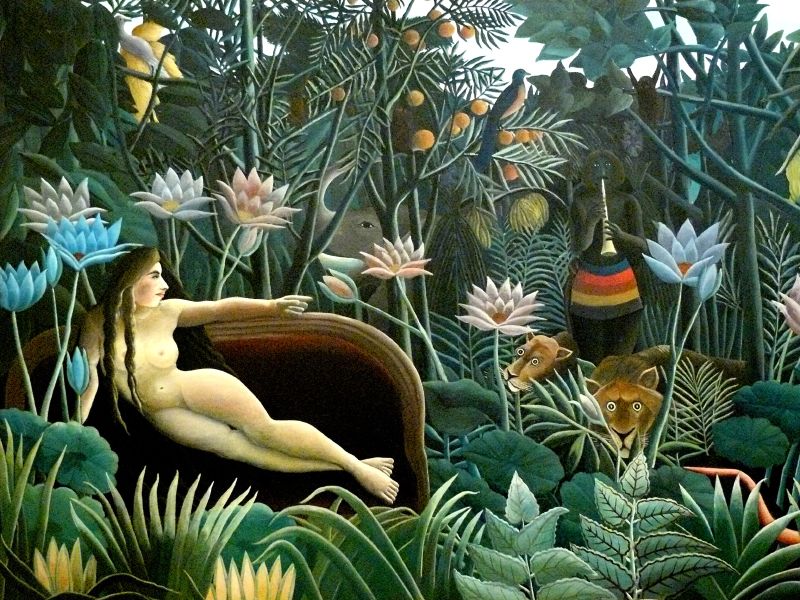 Henri Rousseau (1844-1910), retired toll and tax collector (that’s why he got a nickname Le Douanier – the customs officer), started painting as a middle-aged man and was self-taught.

He had been exhibiting since 1886, but nobody gave value to his work.

The first person who really paid attention to his work was young Pablo Picasso. He was amazed by Rousseau and considered him a true brilliance.

Rousseau’s works are the most frequently reproduced examples of naive art. He was painting portraits, exotic vegetation and jungle scenes, although he had never left France or visited a jungle.

He found his inspiration in children’s books and the botanical gardens of Paris. The magical world of his paintings doesn’t need any explanation (nor is it possible) in order to be understandable, to speak to the audience.

Maybe precisely because of that, its magic becomes so real.

In his works was finally gained a frank virtue of emotion that Gauguin was trying so hard to achieve. Picasso and his friends considered him as the father of 20th-century painting.

Rousseau influenced many avant-garde painters, including Picasso, Jean Hugo, Surrealists and others. They adopted the artist’s sense of freedom and instinctive approach to the composition.

This genre turns the reality of adulthood into weightless joys of youth. It creates an altered, lighter reality. This is reached in different ways.

Often, there is an inconvenient relationship with the formal standard of painting. For example, artists ignore three rules of perspective which say that the size of objects must decrease proportionally with distance, the colour must be muted with distance and precision of details decrease with distance.

Breaking the rules is essentially what naive artist does, probably unconsciously, producing works that are geometrically inaccurate with crooked perspective and uneven shapes, as a result.

Also, details appear equally rich, no matter if they are in foreground or background. This makes an illusion that figures are floating or positioned in space without anything solid anchoring them in place.

The absence of perspective is one of the most important characteristics of naive art. Paintings convey a sense of frozen motion and deep, calm space, which contributes the feel that objects are floating.

Figures in paintings are usually shown full face or absolutely strict profile. They rarely cover up much of a face and almost never paint figures entirely from the back.

Intensity and passion are communicated through the figures, especially their staring eyes and preciseness of line and color.

Details are remarkably well-defined, which, besides bright colors, adds to the liveliness of a painting. 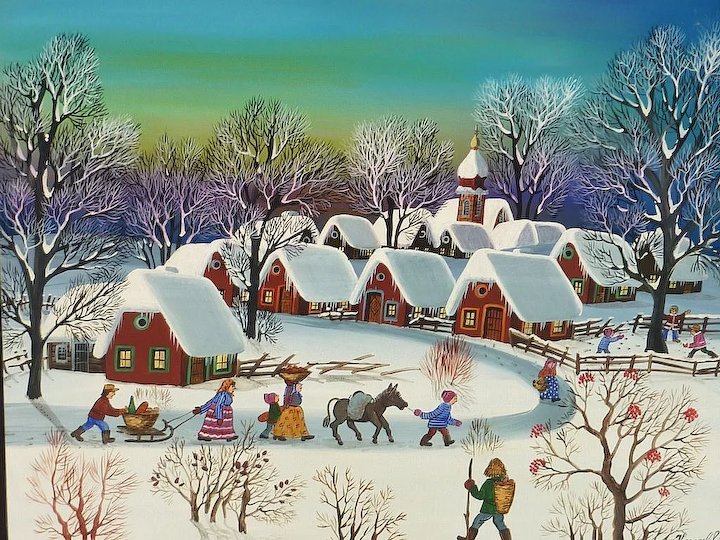 The focus is on lively characters and rarely on lifeless objects. They paint exotic places, even if they’ve never been there (for example Rousseau’s jungle), fantastic creatures, wild animals, everyday-life scenes, rural life scenes (farmers, mowing the fields, shepherds, pets etc.), landscapes, landscapes under snow, sledding and much more.

Rousseau is undoubtedly the most influential naive artist, but there are other artists of this genre who are worth mentioning.

Antonio Ligabue, an Italian painter, was one of the most important naive artists of the 20th century. He gained recognition for his work during the 1940s.

Russian painter Nikifor created over 40 000 paintings. Sidney Nolan created landscapes that aimed to celebrate Australian history. Grandma Moses started her artistic career at the age of 78 and was known for her take on American realism.

Ilija Bašičević Bosilj, outsider and naive painter, uneducated Serbian farmer, started painting as a middle-aged man, and despite that had solo exhibitions even in New York. 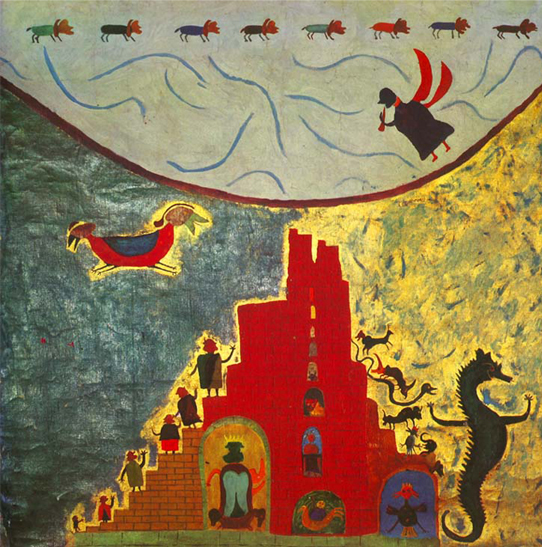 Connection to other art genres

Primitive art refers to tribal art from Africa, the South Pacific and Indonesia, prehistoric and very early European art. Primitivism is used to describe any art that imitates or is characterized by primitive art.

Outsider art represents any work of art that is created by socially and culturally marginal people – undereducated, mentally ill, prisoners – unconnected to the conventional art world. 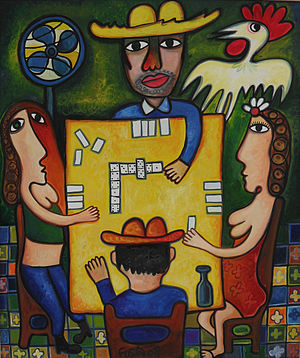 Appreciation of naive art has increased over years. Today, it is completely recognized art genre that is spread and represented in galleries all over the world.

1 thought on “Naive Art – The Art Of A Brighter Reality”