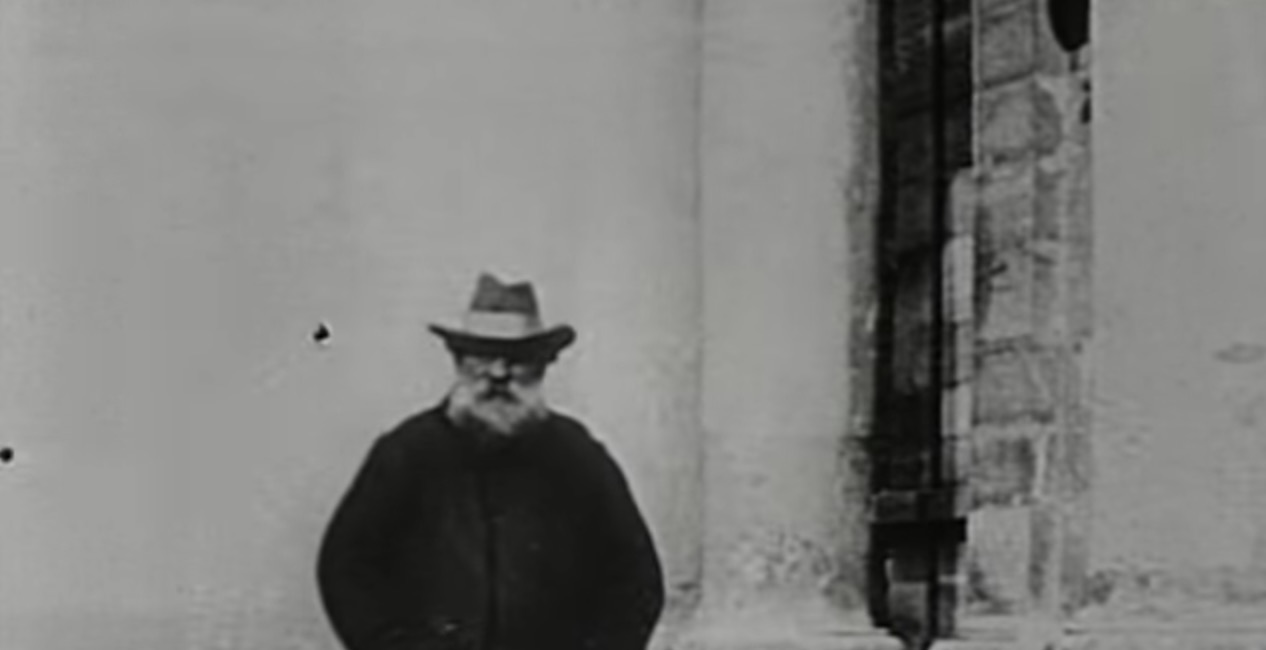 In front of the model, I work with the same desire to copy the truth as if I were making a portrait; I do not correct nature, I incorporate myself into her; she leads me.

I can work only from a model. The sign of the human form fortifies and nourishes me.

He was born on November 12, 1840 in a poor area of Paris’s fifth arrondissement to Jean-Baptiste Rodin, an office clerk in the local police station and his second wife, Marie Cheffer.

In 1854, he decided to pursue a career in the arts, attending the Ecole Speciale de Dessin et de Mathematiques which trained boys in the decorative arts.

Due to poor vision, Rodin was greatly distressed at a young age. Unaware of his imperfect eyesight, (he was nearsighted) a dejected Rodin found comfort in drawing, which allowed him to clearly see his progress as he practiced on drawing paper.

By age 14, Rodin had developed obvious skills as artist, and soon began taking formal art courses. While completing his studies, the aspiring young artist began to doubt himself, receiving little validation or encouragement from his instructors and fellow students.

After three years of studying sculpture and drawing, he applied to attend the prestigious Ecole des Beaux-Arts. He was gravely disappointed when the school denied him admission.

While he passed the drawing competition, he failed three times in the sculpture competition; his pursuit of naturalism did not suit the school’s academic style.

After the third rejection, Rodin resigned himself, at the age of 19, to take job in plaster workshops to create architectural ornaments.

His career in the decorative arts working on public monuments provided him with a meager living for the next 20 years.

He continued to make sculptures, and by the mid-1860s he had completed what he would later describe as his first major work ‘’Mask of the Man With the Broken Nose’’ (1863-64).

The piece was rejected twice by the Paris Salon due to the realism of the portrait, which departed from classic notions of beauty and featured the face of a local handyman. 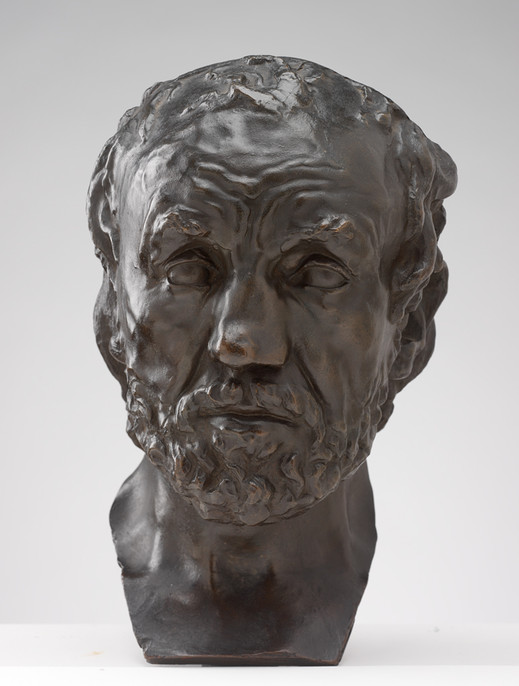 In 1866, Rodin met Rose Beuret, and she remained his lifetime companion despite his numerous affairs.

Around this time, Rodin found better fortune-filling commissions in the workshop of Albert-Ernest Carrier-Belleuse, a commercial sculptor, but the steady work and increased income was disrupted by the Franco-Prussian War in 1870.

A fateful trip to Italy in 1875, with an eye on Michelangelo’s work further stirred Rodin’s inner artist, enlightening him to new kinds of possibilities, he returned to Paris inspired to create and design.

The Age of Bronze

In 1876, Rodin completed his piece ‘’The Vanquished’’, which he called ‘’The Age of Bronze’’, a life-size sculpture of a nude man clenching both of his fists, with his right hand hanging over his head. 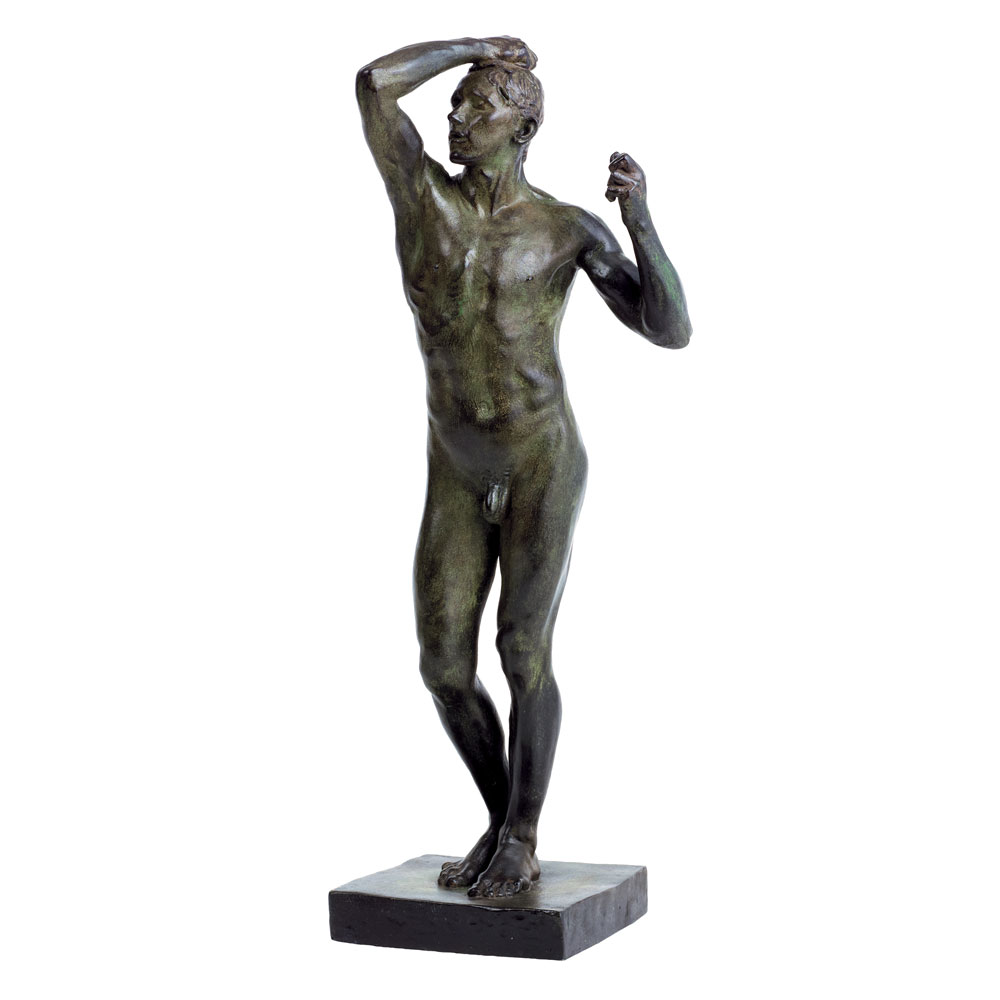 A young officer was the model for this sculpture, which provided the first great ‘success de scandale’ of Rodin’s career. The composition and rough surface of the figure were unconventional by academic standards.

The subject also remained obscure- the title only vaguely suggesting classical art- and prompted confusion among critics; rather than clothe his image of man in respected symbolism, Rodin had presented a common man, naked.

The Salon accepted the work, but doubts were raised about its authenticity and many accused him of casting directly from the model’s body; the sculpture appeared so realistic that it was directly modeled from the body of the model.

The allegations were a testament to Rodin’s technical skills, though the suggestion that he had somehow cheated heartily offended the sculptor, who was able to disprove the claim with photographs of his model.

However, the work was validated when it was purchased by Under-Secretary of the Ministry of Fine Arts, Edmond Turquet. Turquet would then commission Rodin to create a monumental bronze doorway for a planned museum of the decorative arts.

The Gates of Hell

As Rodin entered his 40s in the fallowing decade, he was able to further establish his distinct artistic style with an acclaimed, but sometimes controversial list of works, eschewing academic formality for a vital suppleness of form.

Rodin laboured on this project for over twenty years.

It is believed that Rodin chose to draw on Dante’s Inferno for the subject matter. The monument consisted of various sculpted figures, including the iconic ‘Thinker’(1880), ‘The Three Shades’(1886), ‘The Old Courtesan’(1887), and the posthumously discovered ‘Man with Serpent’(1887).

The Thinker is the most famous example.

Deriving from a figure at the top of the sculpture who gazes with melancholy over the hellish scenes bellow him, he represents Dante the author of the Divine Comedy; the figure also represents modern, secular man, strong in mind and body, but lonely and doubtful in the position he has created for himself as master of his own universe.

The Gates of Hell was a deliberate attempt to rival Lorenzo Ghiberti’s famous bronze doors for the Baptistery of Florence Cathedral, the Gates of Paradise (1425-52), the competition for which is often said to have initiated the Renaissance.

Rodin initially planned to split the composition into a series of panels, just as Ghiberti had done, but after looking at images of Michelangelo’s Last Judgment (1534-41), he opted for a more fluid arrangement of figures.

Although Rodin wished to exhibit the completed ‘Gates’ by the end of the decade, the project proved to be more time-consuming than originally anticipated and remained uncompleted.

The years during which Rodin worked on The Gates of Hell coincided with his relationship with Camille Claudel, a young sculptor who joined his studio as an assistant in 1884. 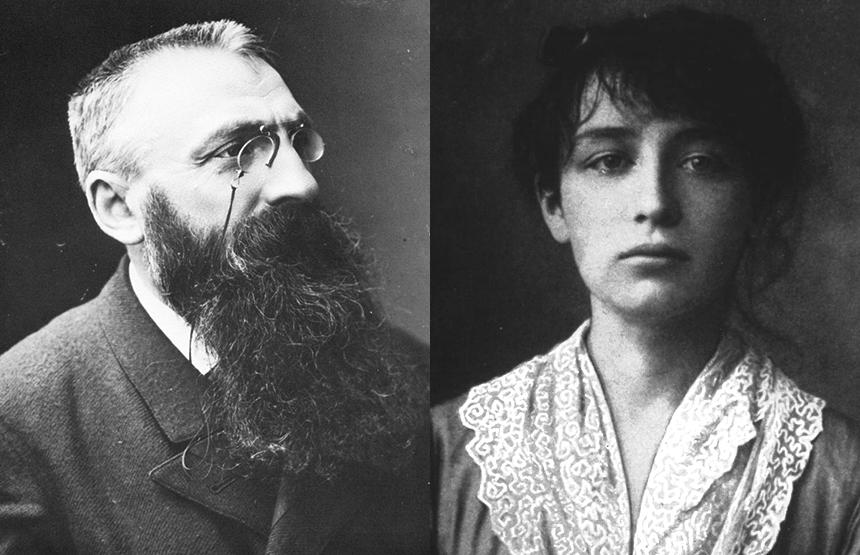 The most sensuous of these groups was the Kiss (1884). 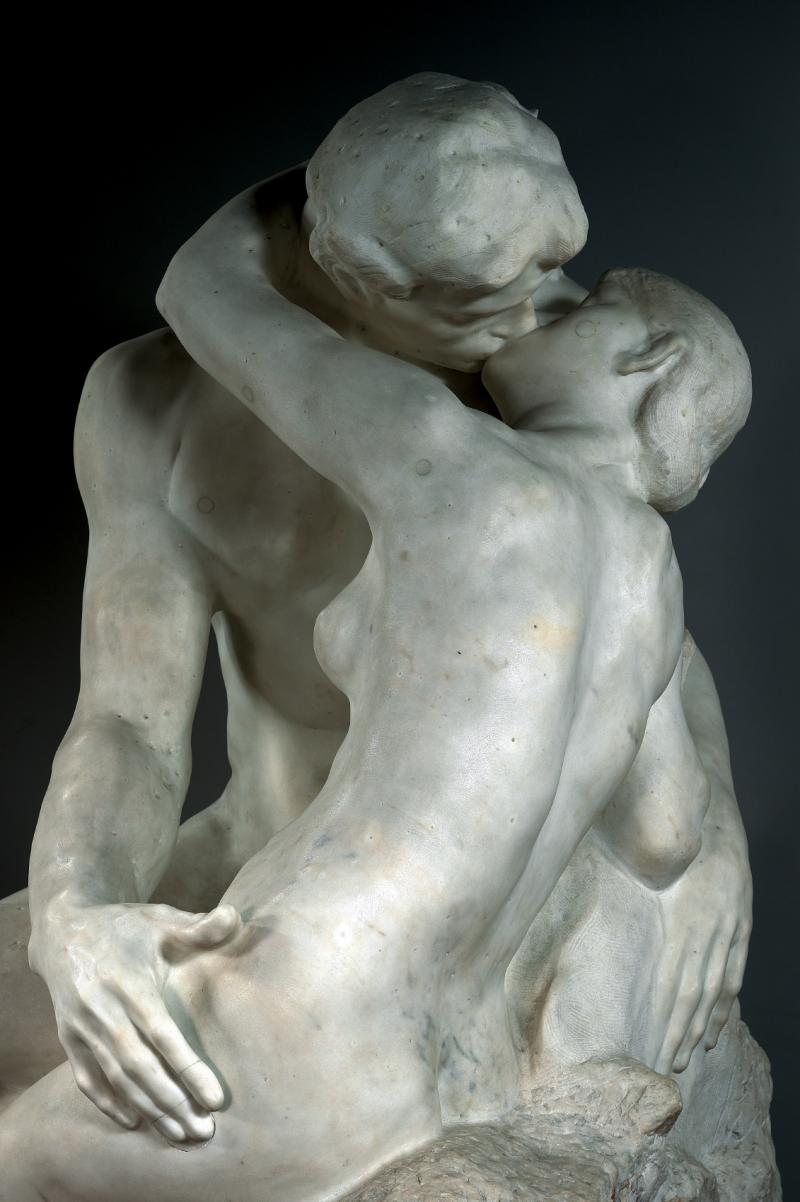 The critics gave the sculpture the title, but Rodin originally called it Paolo and Francesca, after the story in Dante’s Divine Comedy about a young noblewoman who falls in love with her husband’s brother.

In the story, the couple is killed by the jealous husband, but Rodin focused instead in their loving embrace.

The Burghers of Calais

By 1899 Rodin had a large studio with several assistants. His work continued to elicit scandal and trouble. ‘The Burghers of Calais’’ a piece from 1889, is a public monument made of bronze portraying a moment during the Hundred Years’ War between France and England in 1347. 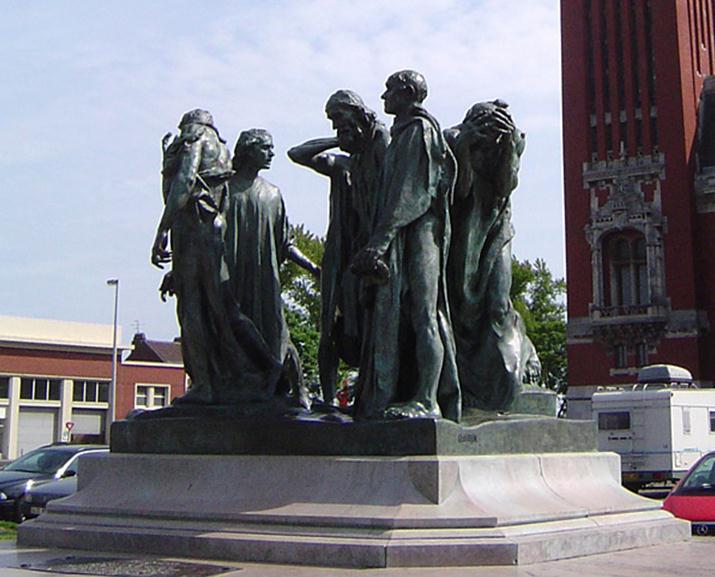 The piece includes six human statues, and depicts a war account during which six French citizens from Calais were ordered by monarch Edward III of England to abandon their home and surrender themselves—barefoot and bareheaded, wearing ropes around their necks and holding the keys to the town and the caste in their hands— to the king who was to order their execution thereafter.

‘The Burgers of Calais’ is a portrayal of the moment that the citizens exited the town; the group was later spared death due to the request of Queen Philippa.

The piece was nearly refused for its depiction of the city’s heroes as dejected victims. The figures are arranged all on one level, rejecting the pyramid composition typical of figure groups at the time.

The men look downtrodden, but determined. They are dressed in rags, and their hands and feet are expressively enlarged.

However, their awkward appearance did not suggest the heroic dimension that the town had envisioned, and the sculpture was accepted with some hesitation and compromise.

Similarly, in 1881, Rodin was commissioned by the Society of Man of Letters to create a memorial for the poet Honore Balzac. Instead of taking 18 months to complete the work, Rodin became infatuated with the topic, and completed the commission in 7 years.

Rodin spent years reading Balzac’s poems, finding pictures of him and models who bore a resemblance to the heavy-set man.

Finally, he placed the proud head on top of a body swathed in a huge, shapeless robe and made a mound-like protrusion at his crotch as a reference to his virility.

The commission was ultimately rejected, and after much controversy Rodin decided to keep the sculpture for himself. 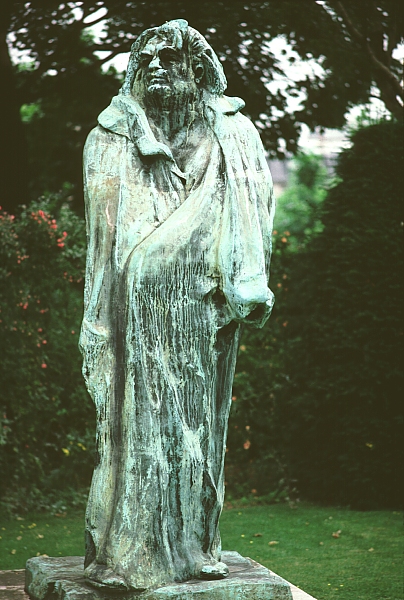 After the sculpture of Balzac, Rodin’s pace slowed down, but he had achieved financial success.

Several exhibitions around the turn of the century brought him worldwide renown; exhibitions in Belgium and Holland in 1899, his first retrospective in Paris in 1990, subsequent shows in Prague, Germany and New York.

Around 1900, there was a pressing desire to find a new formal approach in sculpture.

The theories of the German sculptor Lehmbruck were symptomatic from this point of view. In his writings, he particularly condemned ‘unbridled sentimental inventiveness’, making explicit references to Rodin’s art.

In 1908, Rodin moved to the now-famous Hotel Biron, the most beautiful 18th– century Parisian mansions, which became his new studio and home of his affair with the Marquise and later Duchess, Claire de Choiseul.

She exercised great control over his life and the sale of his work for seven years, until she was accused of stealing a box of drawings.

Because of her scheming and that of other women around Rodin, friends encouraged him to marry Rose Beuret in January 1917. Rose died two weeks after the wedding, and Rodin passed away on November, 17 of that same year in Meudon, France.

Before his death he bequeathed all of his sculptures, drawings and archives to the state of France to create a museum in the Hotel Biron at Meudon. 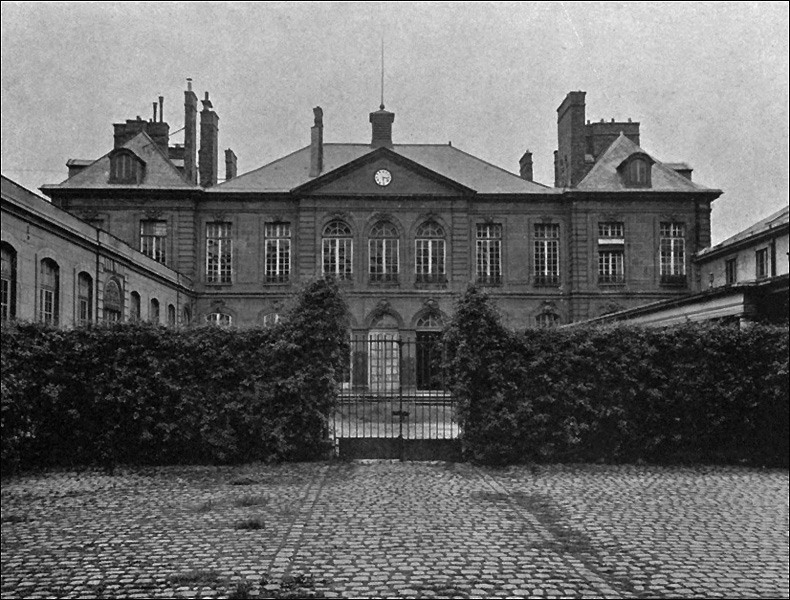 The Museum was opened in 1919; after several years of reconstruction, the museum was reopened in 2015 on November, 12, Rodin’s birthday.

By the time of his death, Rodin was linked to Michelangelo. His reputation as the father of modern sculpture remains unchanged; his many intimate drawings of his models have altered the nature of the traditional respect paid to this eminent artist.

Henri Matisse was influenced by the spontaneity of his drawings, while Cubists and Futurists were fascinated by his sense of motion and the fragmentation of his human forms.

While Rodin’s reputation declined in the decades following his death, his rebellion against academic standards and his vivid expression of the human form planted the seed for a new French sculpture.

To the generation of sculptors coming forward in the 1890s, faced with the conventions of Academic art and the death throes of Realism, Rodin seemed to be the one who had breathed new life into their art form.

We’ll leave you with this video documentary about Rodin.