His pictures where published and exhibited all around the world and his image of the Rhine river is the most expensive photograph ever sold in an auction.

Before we go backward, here’s a great video you can watch about Gursky that can whet your appetite to learn more about him.

Andreas Gursky was born on 15 January 1955 in Leipzig, Germany.

It can be said, that Gursky‘s way in life was decided of circumstances: his father and grandfather both were successful commercial photographers, but Andreas turn into photography not that easily.

When Gursky was one year old, his family moved to Düsseldorf, West Germany where his father started to work at his own photo studio.

Despite of growing up surrounded by photo equipment, Andreas wasn‘t sure who he wanted to be in the future. According to himself, he didn‘t know what else he could do in life, so he stayed by the photography and started to study Photography at the Folkwangschule in Essen.

After graduation, at first, he had a thought work as a photojournalist, but circumstances led him to the Düsseldorf Art Academy in 1980 to study further because he met Thomas Struth (pictured below), a student who already studied there and who later became also a famous photographer. 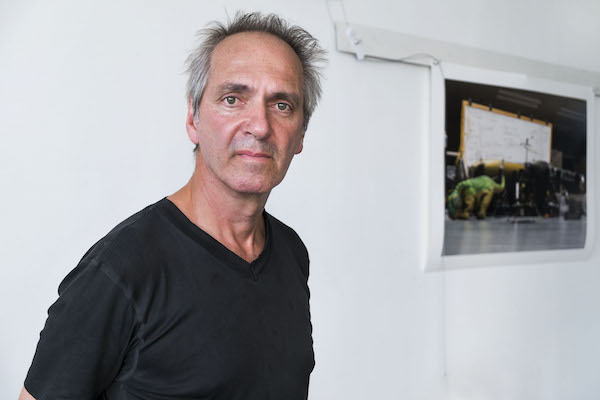 The class Andreas joined back then, was leading by the photography masters Hilla and Bernd Becher.

The couple was known in contemporary‘s art world for their pictures of disappearing industrial architecture in the Ruhr area, Germany and for creating “Becher school ” also known as “Düsseldorf school” – a group of talented students, who later became well-known photographers.

Creating his own style

Andreas Gursky’s themes in photography are unique because he is a global thinker. Like every photographer, he wants to show his own perspective of things in the world. 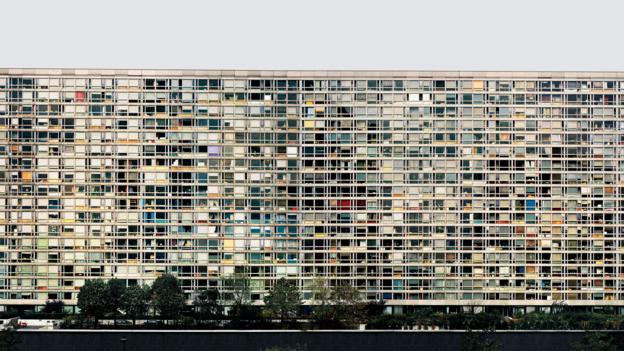 Until 1990, Andreas hasn’t used digital tools for pictures editing, but later these tools helped him to create unique images from different, but pictures with the same objects. It is an interesting paradox because he uses the technology of manipulation to show reality.

According to Gursky, he wasn’t interested in individuals, but into human species and its environment and he tried to portray it in his works.

He focused on the global systems by which society was controlled: the production of goods, the containment, and movement of people, the circulation of finance, the organization of leisure. 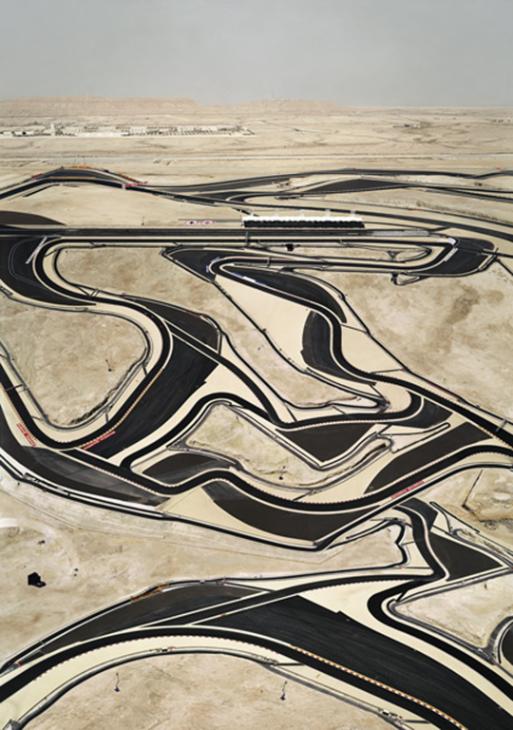 His look was focused on consumerism, but he said that he didn’t suggest any solutions, only the preservation of relevant things and processes in the world.

One of the objects he has chosen to show was people, working together as a social ecosystem of the world in the offices of the large companies.

While developing this topic, he created images from different places in the world where people are working in the stock markets by sitting at their desks usually with the phones in their hands. Busy office workers reflect on an always rushing, fast-changing world. 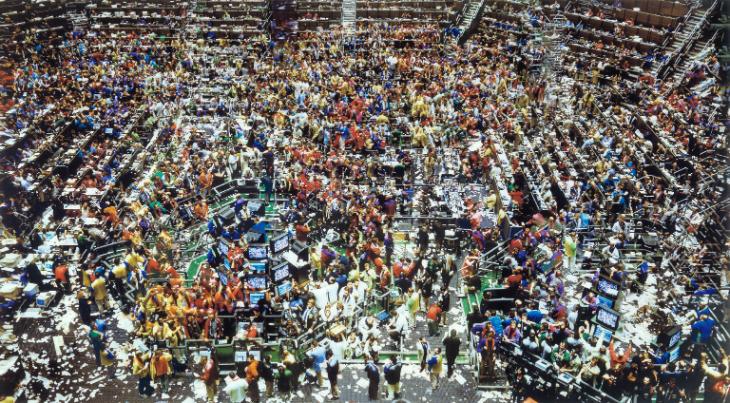 Andreas’ photographs are unique because of its large format. It all started from his picture he took during a holiday in Switzerland in 1984.

In this picture, he captured Klausen Pass – a colored image of the mountain and small figures of tourists going towards it. 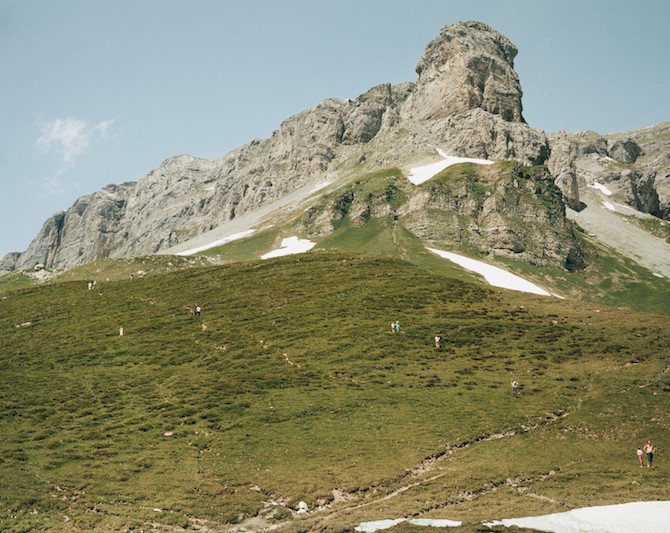 At that time, Gursky realized that the relationship between figures and space is interesting to him.

In his shots, he puts many small objects, for example, thousands of store goods at shelves at the supermarket or many pieces of books at one of Amazon’s warehouses in the USA.

These shots create an effect of completely fulfilled space and basically illustrate the real face of capitalism.

According to the Hayward Gallery’s director Ralph Rugoff, who exhibited Gurksy’s works retrospective in 2018, Andreas with his pictures gives the viewer space for his own thoughts, but the most important – artist doesn’t tell them what to think.

One of Gursky’s pictures’ attributes is that his works are compared to traditional art paintings because of their compositions.

The author combines his images from a few separate pieces and creates diptychs. For example, of his pictures, he took in 1994 from the Hong Kong Stock Exchange, in which the viewer can see many busy office workers.

Or diptych he created in 2001 called “99 cents” in which are portrayed store shelves full of goods. 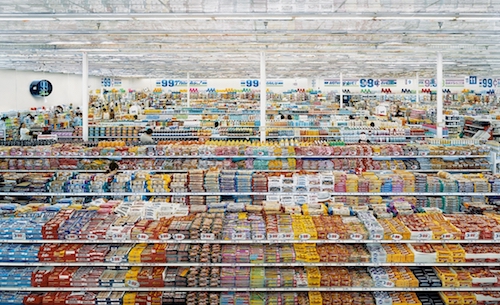 The second part of his picture is like a second half and they both together create a full impression of the captured objects.

Andreas’ images, in general, are similar to the abstract paintings because of the natural stripes in nature objects and vivid colors.

Sometimes in his pictures, there can be only one small person captured and you can see him only when you pay attention to the details.

Gursky’s name came into photography’s history not only because of its merit for contemporary art, but in the money related field too.

His work named “The Rhine II“ today holds title of the most expensive in auction sold photograph.

It was sold for $4,3 million in 2011 and was unexpected for the author himself. Photographer captured one of the longest rivers in Germany – Rhine in Düsseldorf where he lives and across which he jogs almost every day.

This colored mage belongs to contemporary photography and has straight horizontal lines which separate reflecting grey sky into the river surrounded by green grass.

The famous picture was manipulated – buildings across the river were deleted from the background, so the whole view creates an impression of fully nature landscape and mesmerizes its simplicity.