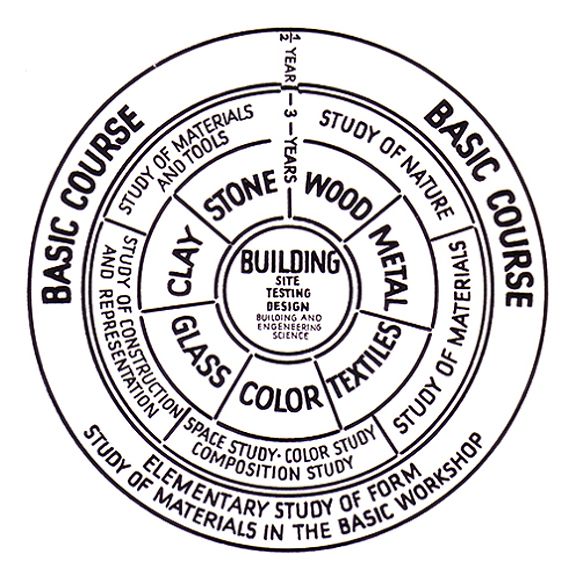 The Bauhaus, a German art and design school, was one of the most significant and influential modernist art schools, one of whose approach to understanding art’s relationship to technology and society and its teaching methods had a major impact in United States and Europe, long after it closed. The motivation behind the origination of the Bauhaus lay in anxieties about the soullessness of manufacturing in the 19th century, and in fears about art’s loss of purpose in industrial society. Emerged in the mid-1920’s, the Bauhaus was shaped by the late 19th and early 20th movements and trends, which had sought to level the distinction between applied and fine arts and to reunite manufacturing and creativity.

This fact is reflected in the sentimental romantic medievalism of the school’s early years, but in the mid 1920s the medievalism gave way to a stress on uniting art and industrial design; it was ultimately proved to be its most important and original achievement.

In 1919, Walter Gropius, an architect and demobilized World War I officer was appointed director of The Art and Crafts School in the city of Weimar. He renamed school to Bauhaus, a unique, memorable name, which is the transliteration for building house, and according to the Bauhaus-Universität Weimar, it stands for an eagerness to experiment, creativity, openness, a close link to industrial practice and inter-nationality. The Bauhaus movement was considered a radical step towards modernism and its core objective was a radical concept: to re-imagine the material world to reflect the unity of all arts. During the 14 years of its existence, Bauhaus was operational in three separate locations in Germany: Weimar, 1919-1925, Dessau, 1925- 1932, and Berlin, 1932-33.

The Bauhaus had a unique curriculum, described by Gropius in the manner of a wheel diagram. The outer ring representing a six-month preliminary course- the vorkurs, which immersed the students, who came from a diverse range of educational and social backgrounds, in the study of materials, color theory and the formal relationships in preparation for more specialized studies; the two middle rings as two three-years courses, focused on problems related to form- the formlehre, and a practical workshop that emphasized functionalism and technical craft skills through simplified, geometric forms- the werklehre. Following their immersion in Bauhaus theory, students entered specialized workshops, including cabinetmaking, weaving, pottery, metalworking, wall painting, textilworking, and typography.

At the center of the wheel- curriculum were courses specialized in building construction that led students to seek necessity and practicality through technological reproduction, with an emphasis on workmanship and craft that was lost in manufacturing.

In addition, the general pedagogical approach was to eliminate competitive tendencies and to foster a sense of community and a personal creative potential. The Gropius’s Bauhaus attracted the fabulously talented faculties, the creators of the school’s program. Many of the most talented designers of the twentieth century taught or studied there: Marcel Breuer in furniture, Bayer in graphics, Gropius and Mies van der Rohe in architecture, Anni Albers and Gunta Stӧlzl in textiles, Oskar Schlemmer in theater design, Laszlo Moholy-Nagy in film; the great artists, Paul Klee and Wassily Kandinsky were working alongside them.

There were social and political problems from the beginning. Women students protested against being confined to the ceramics workshop and weaving; the locals objected to the students’ bohemian habits, and more seriously, the Weimar Nazis saw the Bauhaus as a fertile ground for Bolshevism, despite Gropius’s ban on political activities.

Walter Gropius favored the rationalism of the Russian Constructivism and the emerging Modern movements, believed in integration of their principles into everyday life, by applying them to industrial products and buildings. When the Nazis came to power in Weimar in 1925, Bauhaus moved to Dessau, the German industrial town. Gropius negotiated a deal to build a new school in Dessau. In this period, the Bauhaus enjoyed a few productive years there, those years was a manifesto for the new spirit of the Bauhaus.

Walter Gropius’s building complex for the Bauhaus, represented a landmark in functionalist design of the modern era; the design seems strongly unified from above, each element is divided from the next, but on the ground it unfolds a wonderful succession of changing perspectives.

The building consists of an asphalt tiled roof, steel framework and reinforced concrete bricks to reduce noise and to protect against the weather. A glass curtain wall, a feature that would become a typical of modernist architecture, allows in ample quantities of light. The cabinetmaking workshop was one of the most significant in the Bauhaus. This workshop studio reconceived the essence of furniture, seeking to dematerialize conventional forms such as chairs to their minimal existence.

The innovative use of materials and the sleek design in Marcel Breuer’s The Wassily Chair are typical of the groundbreaking developments in design that made the Bauhaus famous. Its components are arranged with a clarity that makes its structure immediately legible.

The designer constructed the chair using recently developed seamless-steel bent tubing that could endure physical tension without faltering. Although Wassily Kandinsky was interested in geometric abstraction at the time he was teaching at the Bauhaus, this piece came to be popularly associated with him decades later, and by accident when it was promoted as the Wassily Chair by an Italian manufacturer.

The textile workshop, particularly under the direction of designer and weaver Gunta Stӧlzl, created abstract textiles which were used in Bauhaus environments. Students studies technical aspects of weaving, color theory and design. A head of the workshop, Stӧlzl encouraged experimentation with unorthodox materials such as fiberglass, metal, cellophane.

The architectural wall painting along with studio’s textiles decorated the interiors of Bauhaus buildings, providing polychromatic yet abstract visual interest to these somewhat sever spaces. While the weaving studio was primarily comprised for women, this was in part due to the fact that they were discouraged from participating in other areas.

Metalworking studio along with the cabinetmaking workshop was the most successful in developing design prototypes for mass production. In this studio were created modern items such as tableware and lightning fixtures; these objects were used in the Bauhaus campus itself.

Interestingly, Marianne Brandt was the first woman to attend the metalworking studio and replaced Maholy-Nagy as studio director in 1928. Many of her designs and works became iconic expressions of the Bauhaus aesthetic; her sculptural and geometric silver and ebony teapot, while never mass-produced reflects the Bauhaus emphasis on industrial forms and the influence of her mentor Maholy-Nagy. Uniting the artist’s enthusiasm for material innovation and for the look of machines, the Light Prop/Light Space Modulator by Lazslo Moholy-Nagy (pictured above), 1930 is one of the most famous early examples of kinetic art.

It went on to be presented in many different ways: as a device for experimental theatre, as a freestanding immobile sculpture or as the protagonist of a short experimental film, in which it is shot from different vantage points.

The film captures the reflections and shadows created by the spinning sculpture, at times giving the impression of a functioning machine, a factory or even an urban landscape.

The typography studio, initially not a priority of the Bauhaus, became especially important under graphic designer Herbert Bayer. Many German designers attempted to encourage changes in national customs of printing during the 1920s. The most popular German typefaces, Hitherto, had been influenced by medieval script, and artists such as Herbert Bayer tried to supplant them with more classical designs.

His design employs a minimal, sans-serf typeface. Instead of having two alphabets, the uppercase and the lowercase, Bayer reduced the typeface to only lowercase letters, believing that the uppercase was redundant, since the distinction between lower and upper case conveyed no phonetic difference.

In 1923, a first poster was made for the school that intrigued others to notice the unique design and typeset. The main focus in designing was the effective visual communication with vibrant colors, a balanced layout, harmony, geometric shapes, strong bars, bold and universal type.

It was conceived as both an artistic expression and an empirical means of communication with visual clarity stressed above all. Bauhaus typography became connected to advertising and corporate identity. Since then, his typeface has become synonymous with the Bauhaus.

The piece Dissolving /Vanishing, 1951 is part of Josef Albers’s famous series Homage to the Square, described by his own words as ‘platters to serve color’. He began working on this series in 1949 and worked on it until his death in 1976.

This very piece demonstrates his systematic approach to investigating the optical effects of colors; he explored how colors change depending on their placement within the composition. Although the series was created several years after the Bauhaus movement, the work is typical of the experimental, modernist approach to color and form that underpinned Bauhaus teaching.

Teachers in the school believed that colors and forms could be reduced to essentials and analyzed as separate components; that analysis would yield understanding about the character and effects of these components, and that understanding would result in better design. However, with Nazism in the ascent, political pressure mounted and in 1928, Walter Gropius was worn down by his work and by increasing battles with the school critics, and he stood down. Both of his successors Meyer and van der Rohe, spent their directorships mired in political strife.

By 1928, Meyer, a head of the architecture department was an active communist who incorporated his Marxist ideals through classroom programs and student organizations. However, the school continued to build in strength but criticism of Meyer’s Marxism grew, and eventually, in 1930, he was dismissed as director.

After local election brought the Nazis to power in 1932, the Bauhaus school in Dessau was closed. The same year, 1932, the school moved to Berlin, under the new direction of architect Ludwig Mies van der Rohe. He struggled with far poorer resources and a faculty that had lost some of its brightest stars; he tried to remove politics from the school’s ethos, but after the Nazis came to power in 1933, the school was closed indefinitely.

During the turbulent and dangerous years of World War II, many of the key figures of the Bauhaus emigrated to the United States, where their work and their teaching philosophies influenced generation of young designers and architects.

In 1934, Walter Gropius left Germany, and in 1937 he arrived in the United States to become professor of architecture at Harvard University. He also helped fellow Bauhaüslers to find teaching jobs in America.

Together, they imbued generations of Americans with Bauhaus principles, while Gropius imprinted the technocratic vision of its mid- 1920s heyday on design history.

The Bauhaus effectively levelled the old hierarchy of the arts, placing crafts on par with fine arts such as painting and sculpture, paving the path for many of the ideas that have inspired artists in the late twenty century.