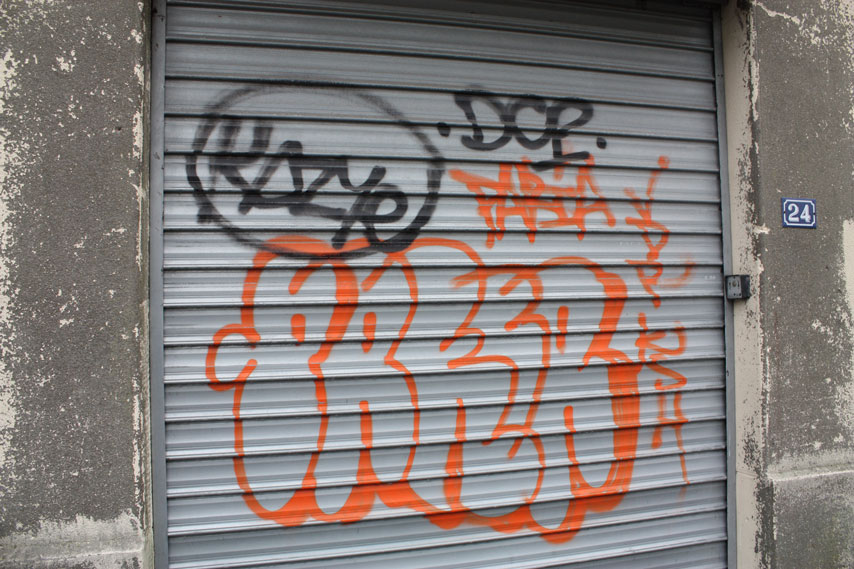 Emerged from the urban spaces, street art now lives in the cultural spaces of virtual communities, galleries, public spaces and public discourses. It has become an object of appropriation by the pop culture and the mainstream symbolism of contemporary art scene worldwide.

In few past decades, there has been an increasing interest in an ephemeral form of art which is marking urban settings worldwide, and has developed a sub-culture all its own.

Some of the earliest expressions of street art were the graffiti, which started showing up on the sides of train cars and walls, and it was the work of gangs in the 1920s and 1930s in New York. Truly impact of this subversive culture was extraordinarily felt in the 1970s and 1980s. These decades were a turning point in the history of street art; it was the time when young people, by responding to their social and political environment started to create a movement, and took the ‘battle for meaning’ in their own hands.

In the next few years, this subcultural phenomenon gained the attention in the official art scene. One of the most respected names in the field of street art scene documentation, who would testify to this with pleasure, is Martha Cooper, a photographer.

Very soon, photographs were not the only medium for displacing street art into different contexts.

Watch this interview with Martha Cooper talking about what kinds of creativity goes on in the streets.

A process of creation through destruction, as essentially illegal activity, began its evolution into variety of forms of artistic styles and expressions, and eventually found its way to galleries and the art market worldwide.

But, it should not be presumed that the beginnings of what we consider street art today define the notion, or a concept, in general. Also, there is no mistake in saying that with graffiti began the concept of the street art.

Some aspects of the first graffiti artists’ urges to create in urban settings still remain in the contemporary art expression of street artist worldwide. It is the same energy that is present in the activities of the street artists emerging during the beginning of the 21st century. However, one thing is certain, the origins of the street art reside in the creative process molded by the artist’s intention to create, or to form, an antithesis to the prevailing social context. Differences Between Vandalism and Official or Public Art

The legal distinction between permanent graffiti or the other forms of street art, and official art is permission; the subject matter becomes even more complex regarding impermanent, nondestructive forms of street art, graffiti in particular, such as video works, yarn bombing, urban intervention and street installations.

Traditional painted graffiti, with permission, is considered public art. Without permission, painters of private and public property are committing vandalism, and by definition, are criminals. However, it stands that most of the street art in unsanctioned, and also, many artists who have painted without permission have been glorified as socially conscious and legitimate artists.

Check out this video where we hear from female graffiti artist Jerk.

Legally speaking, vandalism is destruction of property, and has been shown to have negative repercussions on its setting. Also, it has been observed by criminologists to have a ‘snow ball effect ‘of generating more negativity within its vicinity.

Dr. George Kelling and James Q.Wilson studied the effects of disorder; in this particular case a broken window, in an urban setting. They found that one instance of neglect increases the likelihood of more broken windows and graffiti will appear.

There is an observable increase in actual violent crime. The researchers concluded there is a direct link between street violence, vandalism and general decline of a society.

This theory, named The Broken Window Theory, published in 1982, argues that crime is result of disorder, and that if neglect is present in a place, whether it is disrepair or thoughtless graffiti, people walking by will no one cares about that place, and the unfavorable damage is therefore acceptable. Although it is extremely difficult, if not impossible, to define what unsanctioned imagery is art and what is not, the effects of such images can be observed and conclusion can be reached regarding images’ function within a pubic environment.

In order to define a movement or an art form in general, there is a one simple question – how would it be possible to define street art? Talking about art history, the discourses seem to flourish immensely from one to another into many more.

For cultural theorists and art historians seems to be in need of temporal distance; there has to be a significant and determined period with origin, climax and a future perspective. At the same time, it is always question referring to a cultural context, or question of social structures and semiotic interpretations, eventually, it is a question of identity. In the context of the street art, it can be said it is a movement, most definitely an art expression, even more than this – an art form in its own right. In an urban context, the street art was primarily based on the notion of repetition. Since the impact of the messages becomes notable only through the perceivable presence in the urban and social settings, graffiti artists are trying to reproduce their typography or different symbolic expression over and over again.

In the world when the global digital community we take for granted today wasn’t even conceivable, artists needed to fight for the possibility for their work to be seen.

Some of the famous names in the world of street art such as, for instance, Space Invader and Shepard Fairey, based their activities on creating the seemingly same art piece repeatedly in different cities and different urban spaces.

In fact, they had been building an identity, one print and mosaic piece at a time. The repetition became a process of unimaginable proportions, taken away from the hands of the artists, finding its way to the vastness of virtual space, but never to have its presence questioned.

And this came to be a revolution for the street art phenomenon. Some artists who had begun with graffiti, started to explore some innovative and inspirational methodological plains.

In the work by the artist named BLU, art comes to life in the context of video art. The end product represents a mesmerizing form of artistic expression, but also, it is a journey which happening on the streets, as the artist creates.

The story conveyed in BLU’s videos can be retraced in the urban setting, pieces and bits of the expression building up to narrative; still one cannot but realize that it is not the video file that carries the art, but the street and the walls, and the artists who is willing to take one step further.

By the end of the 20th century and the beginning of the 21st, street art has evolved into complex interdisciplinary forms of artistic expression – from graffiti, stencils, murals and prints, through large scale projects and paintings of various artistic collaborations to street interventions and installations, as well as video and performative art.

The Different Types and Forms of Street Art

Stencil – this type of street art includes a homemade stencil, usually a paper or cardboard cutout, in order to create an image that can be reproduced in an easy way. A form, desired design, is cut out of a selected medium and the image is transferred to a surface through the use of spray paint, roll on paint and so on.

Mosaic – is art of creating an image with an assemblage of smaller parts or pieces to resemble an integral piece of art work.

Traditional Graffiti – painting on the surface of private or public property, visible to the public, commonly with a roll-on paint or with a can of spray. It may be comprised of a simple words, such as artist’s name, or be more complex and elaborate, covering a surface with a mural painting.

It has been considered a subcategory of postmodern art.

Wood blocking – include artwork painted a small portion of plywood or similar inexpensive material and attached to street signs with bolts. Very often, the bolts are bent at the back to prevent removal.

Yarn bombing – while other forms of graffiti may be expressive, decorative, territorial, socio-political commentary, advertising or vandalism, yarn bombing is almost exclusively about beautification and creativity. It employs colorful displays of knitted or crocheted cloth rather than paint or chalk.

The practice is believed to have originated in the U.S. with Texas knitters trying to find a creative way to use their unfinished and leftover projects. Nowadays, it has spread worldwide.

Flash mobbing – large group of people who assemble suddenly in a public place, perform an unusual action for a brief time, than disperse. The term flash mob is generally applied only to gatherings organized via telecommunications, social networking or via viral emails.

The term in not applied, in general, to events organized by public relations companies or as publicity stunts. This can also be considered mass public performance art.

There is no simple definition of the street art, and yet, it seems like as amorphous beast encompassing art which is found in or inspired by the urban environment. With rebellious and anti-capitalist undertones, it is self-reflexive, introspective, form of popular public art, and probably best understandable by seeing it in situ.

Also, the street art can be seen as a tool for communicating views of dissent, expressing political concerns and asking some difficult questions. The definitions and its uses are extremely changeable; basically a tool to mark territorial boundaries of urban youth nowadays, it is even seen in some cases as a means of urban regeneration and beautification.

In general, street art may represent an extraordinary hybrid form of artistic expression, and it could be taking an easy way out. However, there are some relatively stable stances which could be taken into consideration in defying the concept of the street art: street art represents a phenomenon that is, through self-transformation, constantly transforming the reality of contemporary art; street art incorporates a strong devotion to social activism ( not always the case, but it seems that is an attribute of artwork that survived the test of the time ); as a particular urban practice, street art has a great role in shaping and constructing new social and cultural discourses.

The discussion on the meaning of the street art remains in the halls occupied by scholars and critics, who ponder the interaction between notions of Visual Art, Performance Art, Conceptual Art and the ways of articulating these art forms into the wondrous world of street art.

2 thoughts on “What Is Street Art? Its History, Definition, Purpose, and Importance”