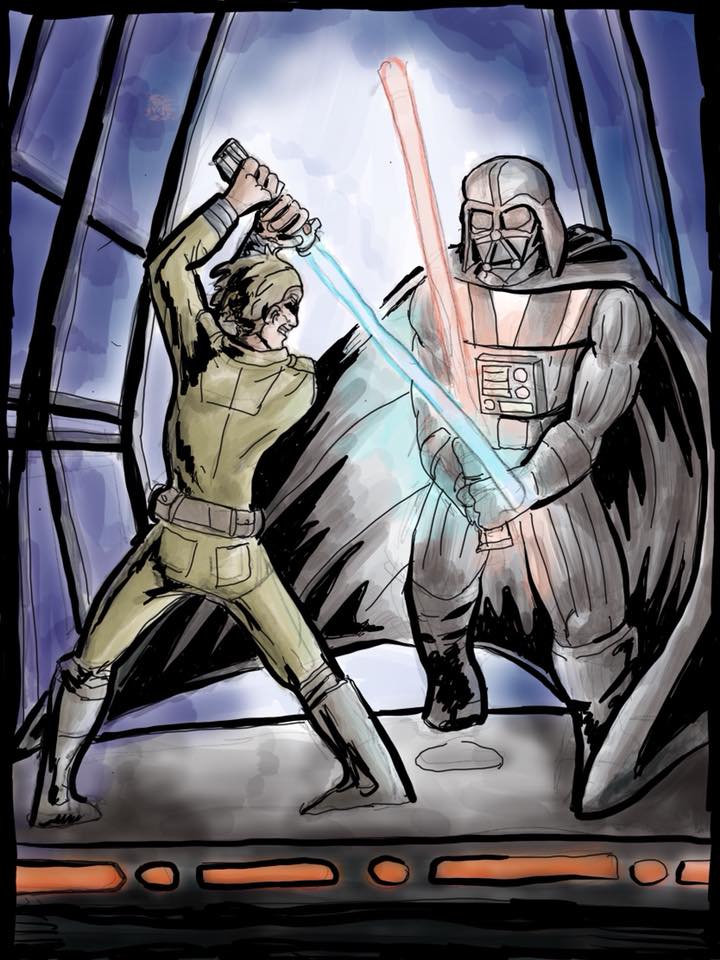 Today I sat down with my buddy Marco Pedrosa, who, as long as I’ve known him, has been drawing.

We met when we were about 11 years old in junior high school, and he was always known as the guy who could draw cool cartoon pictures and stuff of that sort.

Now, about 20 something years later, he’s still drawing stuff, but he’s got a few new toys to play around with.

Namely, he picked up an iPad Pro and an Apple Pencil, which he has been using to draw / paint stuff digitally, yielding some pretty cool results.

I decided to pick his brain a bit about these drawing utensils, and see how he’s putting them to use. Enjoy our chat!

DF: Nice. So, you got some kind of new fangled art device thingie?

MP: I guess so. It’s an iPad Pro with an Apple Pencil. It’s pretty sweet.

DF: Is that a new thing, or maybe I just live in a cave?

MP: It’s newish. This is the second hardware revision so it’s only been out for about 1.5 years. But before the iPad Pro you could us a Wacom cintique to do similar things but those are super expensive.

They’re basically a flat monitor that sits on your desk that you can draw on..It’s what all the comic and graphic design pros use. But the iPad Pro costs a lot less and performs almost as well so a lot of people are digging it.

MP: Well I do a fair amount of graphic work (mockups, icons, posters) for my day job so I actually got them to buy me one. It can make certain types of drawing faster and more accurate than using a non screen based pen tablet so they agreed.

On the side I’ve also been using it to shore up my digital painting skills since the apps for that are so awesome these days.

MP: It’s been a while since I’ve done any serious painting but this tool lowers the barrier and is faster and less messy. It’s kind of the best of digital and real painting without any of the downsides.

MP: Well you don’t wind up with charcoal all over your hands and paint on your face so yeah. Plus you have access to many different brush styles and the layering and limitless undid that you can only get from a digital format and it’s great!

DF: Yeah the stuff looks really cool! I’ll have to share some of it with my readers.

MP: Usually I’ll start with a sketch layer to capture whatever the idea is, then I’ll do a basic color layer to figure out roughly what hues to use where, then I’ll often do an ink layer over top before getting into the real painting.

There can in that every app has its formats but they can all import jpgs and pngs so it’s not usually an issue. If I had to move layers between programs that might be an issue but I usually stick to just one app.

DF: So are there no issues with file formats or what have you? That’s awesome. It does look very painterly.

MP: Yeah! The neat thing is that if one painting attempt isn’t working out you can just hide the layer and try again in another style with some other brushes.

DF: So it’s got a bit of photoshop layer-y stuff happening? How much is this stuff costing btw?

MP: For sure! I like to use layers as insurance. If I’m about to try something I’m not sure about I just put in on a new layer and get rid of it if it doesn’t work out.

DF: Specifically, how much is.. the app? The device? The pen? Is the app just free?

so wait.. are you starting off importing some pre-existing pic or you just make it up? I’m not just playing the part of the clueless guy here, I am that guy! lol

MP: I just make it up of course! I’ll often use pics from the internet for reference on colours and details but I’ll always try to compose something from scratch and take it from start to finish.

I’ve never been into tracing or replicating exists no work through I’m not above trying to understand a style.

DF: Yeah so you grab a Ralph McQuarrie pic and just sort of use it as a reference? Well i notice your style is your style, really. It’s not like you’re copying the artist’s style..

maybe the composition a little bit?

MP: So an iPad Pro goes for around 800$ I think? The pencil is another 120$ and painting apps can go from 5-80$ or some of them require monthly subscriptions.

My fav at the moment is Procreate, which is fairly inexpensive for what you get. I think it’s only 20$ or something. There’s also clip studio paint which is 10$ a month but you can actually make a comic from start to finish with it! Yeah my style is my style. I can’t seem to escape it.

DF: That’s cool.. and it’s super portable yeah? Like you go on vacay, you can just toss this shit in your bag and go. Also, battery life?

MP: Yeah, it’s the size of a clipboard basically! It lasts about 10 hours which is more than enough for me. I’m pretty sure my hand would fall off if I were drawing that long

DF: Yeah might cause an injury! And we don’t live in the days where artists need to work like 160 hours straight for a piece of bread like in the .. whenever that was

MP: Thank god for that.

DF: So we can actually do stuff for fun if we so choose.

MP: Yup. At some point I’d like to get my skill with these tools to the point where I could whip up an image I’m happy with within a couple of hours.

My first few tries over the summer I would call enthusiastic failures but I feel like the momentum is building and I’ve been pretty happy with the last few things.

It’s important not to get discouraged when you’re just figuring out what a new tool is good for. At this point I feel I can probably do a piece digitally about as well as I could if I were doing it by hand so that’s something.

DF: That’s good! You’re pretty in tune with the thing and that’s a good place to be it’s an instrument.

MP: My next thing I think will be figuring out how to escape my “style” since it hasn’t really changed much in a while but I feel it needs to start evolving.

There are lots of things I’d like to get better at in terms of painting but obviously you don’t get anywhere unless you put yourself out of your comfort zone and fail a few times.

DF: That’s for sure. And that’s not easy of course. But this tool seems like a pretty versatile one so i guess you’ll be sticking with it. Will you be getting anything new to go with it? Or just explore the possibilities…

MP: I’ll stick with it as it is for now. I’m really only scratching the surface of what these apps can do. At this point my skill, not the tool is the bottleneck so there’s really no need to jump to something new right now.

Although if an iPad version of Affinity Designer came out I’d be all over that. AF is a vector drawing app, as opposed to all these painting apps that are pixel based.

MP: Yup, they’re good for a different set of problems but I like those too.

DF: Well lots to explore then from here. It’s cool that you’ve kinda got this whole thing going. It’s always good to have an artistic outlet.

MP: For sure. I draw all the time professionally so it’s nice to have an opportunity to do some stuff recreationally too.

DF: Totally. Well thanks for stopping by Marco, good to chat!