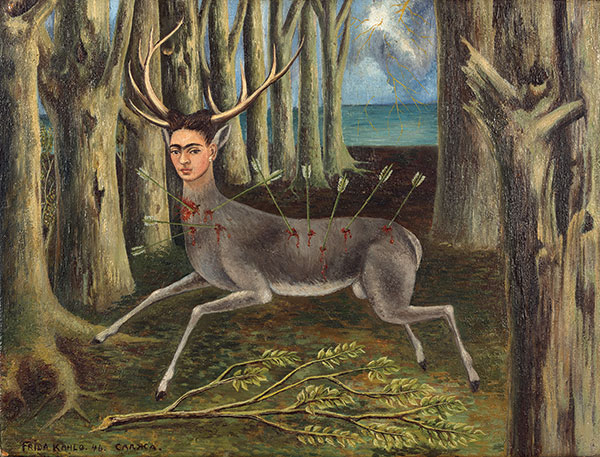 Magdalena Carmen Frieda Kahlo Calderon was born on July, 6, 1907 in what is nowadays known as Casa Azul in Coyoacan, a town on the outskirts of Mexico City. Her father, Wilhelm Kahlo, was German who had moved to Mexico at a young age where he remained for the rest of his life.

Her mother, a Wilhelm’s second wife, Matilde Calderon y Gonzales, born of mixed Spanish and Indian ancestry, raised Frida and her five sisters in a strict and religious household. Frida Kahlo’s work was influenced by traumatic psychological and physical events from her childhood and early adulthood; using her personal tragedy, combined with a realistic painting style, she produced images – approximately 200 paintings, drawings and sketches, that were emotionally raw and visually disturbing.

Several events in Kahlo’s childhood affected her psyche for the rest of her life. She contracted polio at the age of six and was forced to remain in bed for nine months, walking with a limp after recovery.

Her father, with whom she was very close, enrolled her at the German College in Mexico City and introduced her to the writings of European philosophers and poets such as Friedrich Schiller, Johann Wolfgang von Goethe, Arthur Schopenhauer. Kahlo’s mixed heritage permanently affected her approach to the life and artwork. Following the Mexican revolution and new education policy in 1922, Kahlo was one of the 35 girls admitted to the National Preparatory School, where she planned to study social sciences, medicine and botany.

She became friend with a dissident group of students, known as Cachuchas, who confirmed Frida’s rebellious spirit and her interest in literature and poetry.

In 1925, Kahlo was involved in an almost fatal bus accident, and she suffered multiple fractures throughout her body and a crushed pelvis. After nine months recovering in hospital, where she was immobile and bound in plaster corset, she began experimenting in small-scale autobiographical portraiture, and permanently abandoning her interest in medicine.

Gifted with a set of paints from her father, Kahlo spent hours studying herself and confronting existential questions raised by her trauma such as death, dissociation from identity and interiority. The duality of autobiographical content-both the interiority of the person and physical experience- evolved as the central qualities of Kahlo’s painting practice. In 1927, in contact with her friends from the Cachuchas group, Kahlo began to familiarize herself with the artistic and Communist circles in Mexico. Having officially joined the Mexican Communist Party, in 1928, Kahlo sought out Diego Rivera in order to discuss a possible career as an artist.

A year later, in 1929, the two married and moved to Cuernavaca.

Frida Kahlo and Diego Rivera had a tumultuous relationship, marked by multiple affairs on both sides. She had a long affair with Muray, and a short one with Leon Trotsky, as well as extended liaisons with several women.

Some of these attachments were reactions to a volatile marriage and meant to punish her philandering husband. In many ways, Frida lived two lives: one as the wife of Diego Rivera and the second as eccentric, talented painter in her own right. During the majority of her career, she was seen in Rivera’s shadow and it wasn’t until late in life that she gained, as an artist, an international clientele and exhibition program.

The early double-portrait of Kahlo, Frieda and Diego Rivera, from 1931, was painted in celebration of her marriage to Rivera, accentuates Kahlo’s interest in reconciling her identity as his wife rather than as an artist of equal status.

Rivera holds palette and brushes, symbolic of his artistic mastery, while Kahlo’s dresses in costume typical of the Mexican woman, La Mexicana, wearing a traditional red shawl known as rabozo. The positioning of the figures echoes that of traditional marital portraiture where the wife is placed on her husband’s left to indicate her lesser moral status as woman. By the early 1930s Kahlo’s painting evolved to include a more assertive sense of Mexican culture and identity, a facet of her artwork that stemmed from her exposure to the modernist movement in Mexico and her interest in preserving the revival of Mexicanidad, during the raise of fascism in Europe.

Her interest in distancing herself from her Germanic roots is evidenced in her change of name from Frieda to Frida.

The piece My Grandparents, My Parents and I, from 1936, a dream-like family tree painted on zinc, indicates the artist’s fascination with Mexican retablos. Retablos were small paintings on metal made to thank God for his protection and grace.

Kahlo painted this piece to accentuate both her European Jewish heritage and her Mexican background; her paternal side, German Jewish, occupies the right side of the composition symbolized by the sea, and her maternal side of Mexican descent is represented on the left by a map faintly outlining the topography of Mexico.

While Kahlo’s paintings are assertively autobiographical, she often used them to communicate transgressive or political message: this painting was completed shortly after Adolf Hitler passed the Nuremberg laws banning interracial marriage. Throughout the 1930s, life in Mexico was tense for Frida: her husband Diego Rivera was unfaithful and the revolutionary climate leading up to the outbreak of the Spanish Civil War made for an explosive atmosphere.

Frida separated from Rivera in 1935, renting a flat in Mexico City, and began a short-lived affair with the Japanese sculptor Isamu Noguchi.

The Self-Portrait with Cropped Hair, from 1940, shows Frida as an androgynous figure. The critics and scholars have seen this gesture as a confrontational response to Rivera’s demand for a divorce, revealing the artist’s injured sense of female pride and her self-punishment for the marriage breakdown.

Also, the cropped hair presents a nuanced expression of the artist’s identity. She holds one cut braid in her left hand while the hair from her right hand lies scattered on the floor. The braids were a central element in Kahlo’s identity as the traditional La Mexicana, and in the act of cutting off her braids, she rejects her former identity. In 1936, Frida joined the Fourth International and returned to Casa Azul, which became a meeting point for artists, international intellectuals and activists, and in that place she ensured the safety of Leon Trotsky and his wife.

The marriage was the pivot of her life and she did a lot of her best work when it was at its worst. It was on the eve of her divorce from Rivera, 1939, that she painted The Two Fridas, one of the largest and most famous paintings.

This double self-portrait, one of the most recognized compositions, is symbolic of the artist’s pain during her divorce from Rivera and the subsequent transitioning of her constructed identity. On the right, the artist is shown in modern European attire, wearing the costume she donned prior to her marriage to Rivera. Throughout their marriage, given Rivera’s strong nationalism, Kahlo became increasingly interested in indigenism and began to explore traditional Mexican costume, which she wears in the portrait on the left. It is the Mexican Kahlo that holds a locket with an image of Rivera. Symbolic elements frequently posses multiple layers of meaning in Kahlo’s pictures; the recurrent theme of blood represents both metaphysical and physical suffering, gesturing to the artist’s ambivalent attitude toward accepted notion of womanhood and fertility.

The stormy sky in the background, and the artist’s bleeding heart – a fundamental symbol of Catholicism as well as symbolic of Aztec ritual sacrifice-accentuate Kahlo’s personal tribulation and physical pain.

In 1938, during his visit to Mexico City, André Breton, the founder of Surrealism, was impressed by Kahlo’s painting and hosted the artist’s first exhibition in Paris in the following year, at the Galerie Renou et Cole.

The show was enormously successful; the Western, romanticized vision of pastoral Mexico by members of European bourgeois disgusted Kahlo, though she would exhibit with the Surrealists in Mexico City exhibition in January 1940, which was considered the first international exhibition of Surrealism in the Americas. The frontal position and direct stare of Frida in her Self Portrait with Thorn Necklace and Hummingbird, from 1940, directly confronts and engages the viewer. The artist wears Christ’s unraveled crown of thorns as a necklace that digs into her neck, signifying her self-representation as a Christian martyr and the enduring pain from her childhood and her failed marriage.

A dead hummingbird, according to Mexican folkloric tradition symbolic of luck charms for falling in love, hangs in the center of her necklace. A symbol of bad luck and death, black cat, crouches behind her left shoulder, and a spider monkey, gifted from Rivera, symbolic of evil, is included to her right.

Kahlo frequently employed fauna and flora in the background of her burst length portraits to create a tight, claustrophobic space, using the symbolic element of nature to simultaneously compare and contrast the link between a female fertility with the barren and deathly imagery of the foreground.

In September, 1940, following Trotsky’s assassination Frida joined Carlo Rivera in San Francisco. In this period Kahlo remarried Rivera shortly after, and, returned to Mexico City where the two maintained separate flats. She continued to dote on her muse, sending him love notes wherever he was working.

Meanwhile, Frida grew progressively ill from the long-term effects of her childhood traumas. By June, 1946, she could no longer remain upright and underwent an unsuccessful bone-graft operation on her spine in New York.

In 1950, she was hospitalized for nine months at the English Hospital in Mexico.

She continued painting in her final years while also drank heavily and became addicted to painkillers. She still painted, but mostly still lifes, woozy, citrusy things that would be sweet if they weren’t so bizarre, with their gashed and bleeding fruits. Weeping Coconuts, from, 1951, a still life piece is an example of Frida’s late work. In this composition, the anthropomorphism of the fruit is symbolic of Kahlo’s projection of pain into the composition as her health deteriorated at the end of her life.

In contrast with the tradition of the cornucopia, signifying plentiful and fruitful life, the arrangement of fruit in this composition reveals the fleshy and overripe interiors of the fruit, alluding to the dualism of death and life. A small Mexican flag, stuck into a prickly pear, bearing personal inscription ‘painted with all love of Frida Kahlo’, signalling Kahlo’ use of fruit as an emblem of personal expression.

In 1953, Kahlo exhibited one last time at Lola Alvarez Bravo’s gallery in Mexico, and it was her first solo show in Mexico. She was brought to the event in an ambulance and had her four-poster bed placed at the center of the gallery.

She would soon lose a leg to gangrene.

In June, 1954, she had herself pushed in a wheelchair to join a protest against North American intervention in Guatemala. A few days later, she died on July, 13, 1954 at Casa Azul the Blue House, officially of pneumonia, though there has always been talk of suicide. Although Frida’s work are often categorized as Surrealist for her bizarre imagery and her linear style and disturbing themes she was not interested in dreams or in subconscious or in automatic writing, biomorphism (all of which provided a focus of Surrealism); Kahlo’s subject matter was deeply personal rather than intellectual or humorous.

After she died, her work has grown profoundly influential for feminist studies and postcolonial debates, while she become an international cultural icon. It was only in the 1960s and afterward, with the rise of feminism, gay rights and identity politics, that her work begun to make sense.

And then it made explosive sense: an artist who had been bending genders, blending ethnicities, making the personal political and revolutionizing the concept of ‘’beautiful’’ generations earlier.