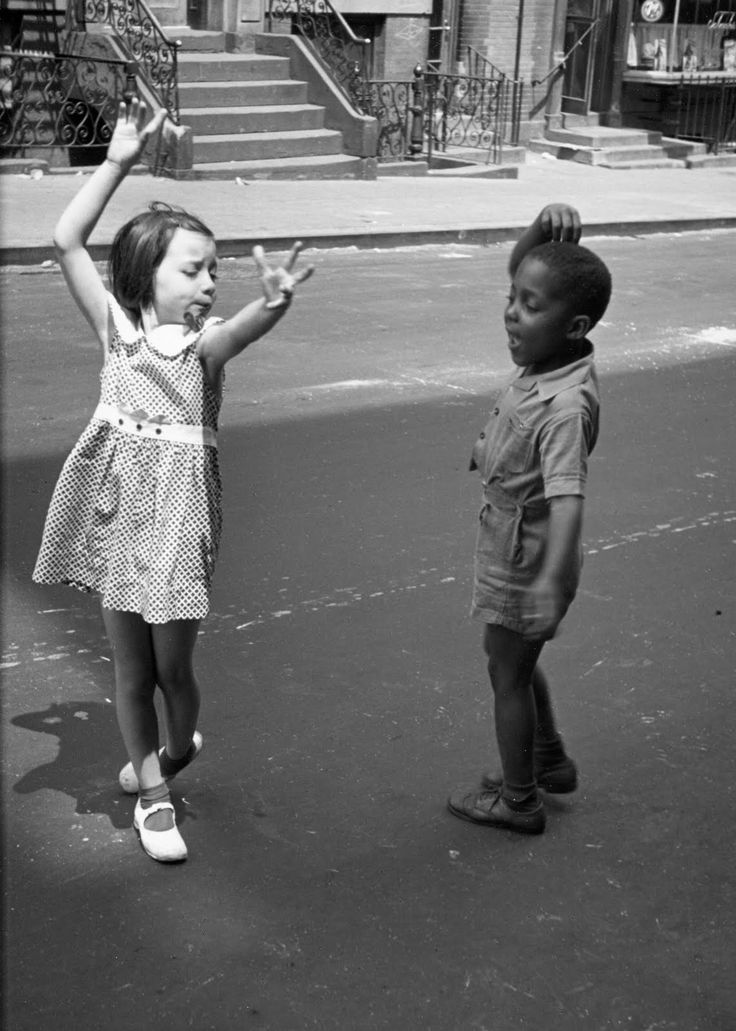 “Since I am inarticulate, I express myself with images” – Helen Levitt

A mother of modern colour photography, Helen Levitt is perhaps one of time’s most forgotten jewels.

Roaming the streets of New York with her precious Leica, she captured an era of front stoops and chalk drawings; of children playing and elders waiting. Prolific from the 1930’s to the 1990’s, her work remains a definitive guide to the sentiment of an era. Street photography requires an appreciation for the impermanence of circumstance. The sparks for Levitt’s particular genius were the ubiquitous chalk scrawls of children. Struck by the temporary nature of these works, she sought to document them; eventually becoming fascinated by the the children themselves. Soon the very fabric of New York with its splendid characters and gritty streets became her passion. Chronicling the living nature of working class neighbourhoods, Levitt led us into a paradox of fanciful reality. Children Are the Future Past

Life in New York in the 30’s, before air conditioning and television, was lived on the stoop. Children played intricate chalked games with enigmatic rules that have no analog today. Entire universes of imagination sprung from every sidewalk and alley as mothers washed and watched. Feet were black soled and faces smudged. Everyone was inspirational in their vivid character borne of hard labouring lives. This is the world Helen Levitt sought to immortalize.

Her early silver gelatin prints set the tone for generations of street photographers. Voyeuristic in nature, Levitt would wait until she was of no notice and choose her shots carefully. Kids were her most beloved subject. She caught the nature of their childish realities in her lens; often creating images bordering on surreal. Children in masks watch an unseen drama as mother dozes. It is a painterly composition and emphasizes the private world of children; separate from the doldrums of adulthood.

Here we see one of the now nameless chalk games of New York. The complexity of their play is offset by the angle taken from the perspective of a watchful parent. Can we ever truly know the meaning of their symbols? No. We are too far away in age and time. Though more confident in black and white, Levitt received two grants from the Guggenheim Foundation in 1959 and 1960 for her breakthrough work in colour. Most of her colour work from the 60s was stolen in 1970 by a burglar, ostensibly still at large. The use of colour takes Levitt’s work from fanciful to devastatingly real. The method of colour transfer used creates saturated tones, evoking the constantly moving wiles of New York. Even these men standing still give a sense of motion, as though seen by one quickly walking past. Children laugh while standing with a laundry basket; each one floral in their unique beauty. Each face a solitary vignette. Every one a work of art. There is something pleasantly heartbreaking about the way Levitt frames time itself.

This writer’s favourite shot in Levitt’s grand catalog takes a purely absurd moment and sanctifies it. A small boy sits next to his sibling. His serious face made more so by the penned mustache and beard. The drawn scar on his forehead only serves to bring more attention to his strong gaze. I feel as though Helen was being committed to memory as much as her subject. It is an intimate moment between them. Levitt eschewed interviews. She was a woman of few words, though it is easy to pretend to know her from her work. Born August 31, 1913, to Sam and May Levitt, the child of Russian, Jewish immigrants flourished in the small neighbourhood of Bensonhurst, Brooklyn. Before marrying Sam, mother May was a bookkeeper; experience that benefited her in her new life married to the proprietor of a wholesale knit goods business.

Not a fan of guided study, Helen dropped out of high school in her senior year. She began working for J. Florian Mitchell; a family acquaintance. Mitchell, as a commercial photographer, put Levitt to work in 1931 developing portrait prints. With her six dollar a week salary, Helen managed to save up for a used Voigtländer camera, which she deployed to practice by photographing her mother’s friends.

Inspired by the work of members of the Film and Photo League; particularly Evans, Ben Shahn and Cartier-Bresson, Levitt was lucky to meet Cartier-Bresson during a year he spent in New York. It was 1935 when Helen accompanied him on a photo walk of the Brooklyn waterfront.

This experience as well as that of frequenting galleries to train her eye in composition fueled her already aflame creative mind. In 1936 she purchased her signature Leica, also favoured by Cartier-Bresson. Over the course of the next two years, Levitt frequented the colourful working class neighbourhoods of New York, with Spanish Harlem and the Lower East Side being favourite haunts. Her shy, wallflower personality suited her well for the task of being an unobserved observer. She had quite the breathtaking portfolio by the time she decided to take her work to Evans. She rapidly became friends with him and helped prepare his exhibition, American Photographs.

Through Evans she was introduced to who she credits as her greatest influence, Ben Shahn. His spontaneous style and honest characterization of his subjects is something Levitt carried through her work all her life. Shahn was impressed with her and sent her to meet James Agee who was both influence and admirer. Helen’s work was a perennial favourite of Agee, especially in his role as a journalist. Not technologically inclined, Levitt never made the jump to photo journalism despite the documentary nature of her work stating, “I was a lousy technician. That part bored me.”

During 1939, MoMA launched it’s photography department. One of Levitt’s most celebrated photographs, Halloween, was a crowning piece of the exhibition and in 1943 she had her first solo exhibition there. Every artist must eat, so by 1949 she found herself a full time film editor under Luis Buñuel, editing pro American propaganda films. Art finds it’s way though and in 1948 a collaborative film between Levitt, Agee, and painter Janice Loeb (then married to brother Bill Levitt) was released. In the Street, a 14 minute documentary of Levitt’s beloved Spanish Harlem, was met with little fanfare. A little later also in 1948, they released a full length film called, The Quiet One.

Still photography, being Levitt’s first love, called her back in 1959 and she came back with a bang. For two years she received grants from the Guggenheim Foundation to explore colour photography. Unfortunately, in 1970 her apartment was burglarized; the only things being stolen were her prints and negatives. She returned entirely to black and white photography in the 90’s because colour was not always appropriate for her vision.

In her later year, Levitt continued to stay out of the spotlight, never being one for attention seeking. This and other factors kept her relatively unknown despite her importance to street photographers and artists of her association. She allowed few books of her works to be published and remained fairly unsung until a traveling retrospective by the San Francisco Museum of Modern Art in 1991. By this time she had given up developing her own prints because sciatica made standing and moving around painful.

There was little left for her to photograph anyway. With a changing fast paced culture, people spent more and more time inside. Of this she said, “I go where there’s a lot of activity. Children used to be outside. Now the streets are empty. People are indoors looking at television or something.” A boy and girl share a private dance in now empty streets. A sombre woman disappearing against the fabric of their fancy watches unregarded. She holds a heavy Leica in which she keeps the echos of their laughter. She is Helen Levitt.