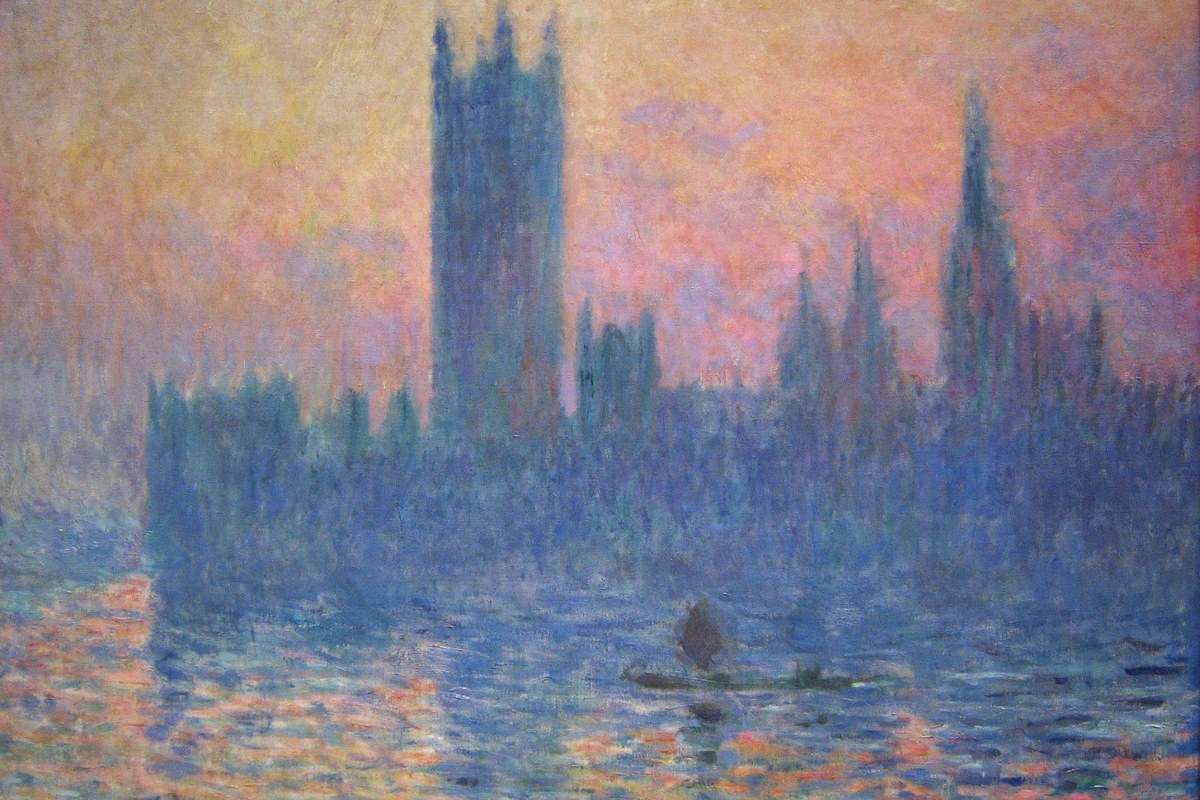 As a first distinctly modern movement in painting, Impressionism emerged in Paris in 1860s, and the end developed chiefly in France during the late nineteenth and early twentieth centuries.

Gustave Courbet and the Realist movement first confronted the official Parisian art establishment in the middle of the nineteenth century. The French were ruled by oppressive regime and much of the people were in the throes of poverty.

The art of that time concentrated on idealized nudes and glorious depiction of the nature, and other works of realism. Courbet though that art closed its eyes on realities of life.

In his protest, he financed a bold act, an exhibition of his work, right opposite the Universal Exposition in Paris of 1855, which led to the emergence of future artists.

The same year, 1855, Salon de Refusés / Salon of the Refused was formed in order to allow the exhibition of works by artists who had previously been refused entrance to the official Parisian Salon, the annual, state-sponsored exhibition juried by members of the Académie des Beaux-Arts.

The 1863 Salon de Refusés exhibition caused a scandal, due to the unconventional styles and themes of works such as Manet’s Le déjouner sur l’herbe (1863).

The painting depicts the picnic of two fully clothed men and two nude women, defies the tradition of the idealized female subject of Neoclassicism in the positioning of the woman on the left who gazes frankly out at the viewer.

Édouard Manet was one of the first and most important innovators who emerged in the art scene in Paris.

By the late 1860s, Manet’s art reflected a new aesthetic – which was to be a guiding force in Impressionist work- in which the importance of the traditional subject matters was downgraded and attention was shifted to the artist’s manipulation of color, tone and texture as ends in themselves. 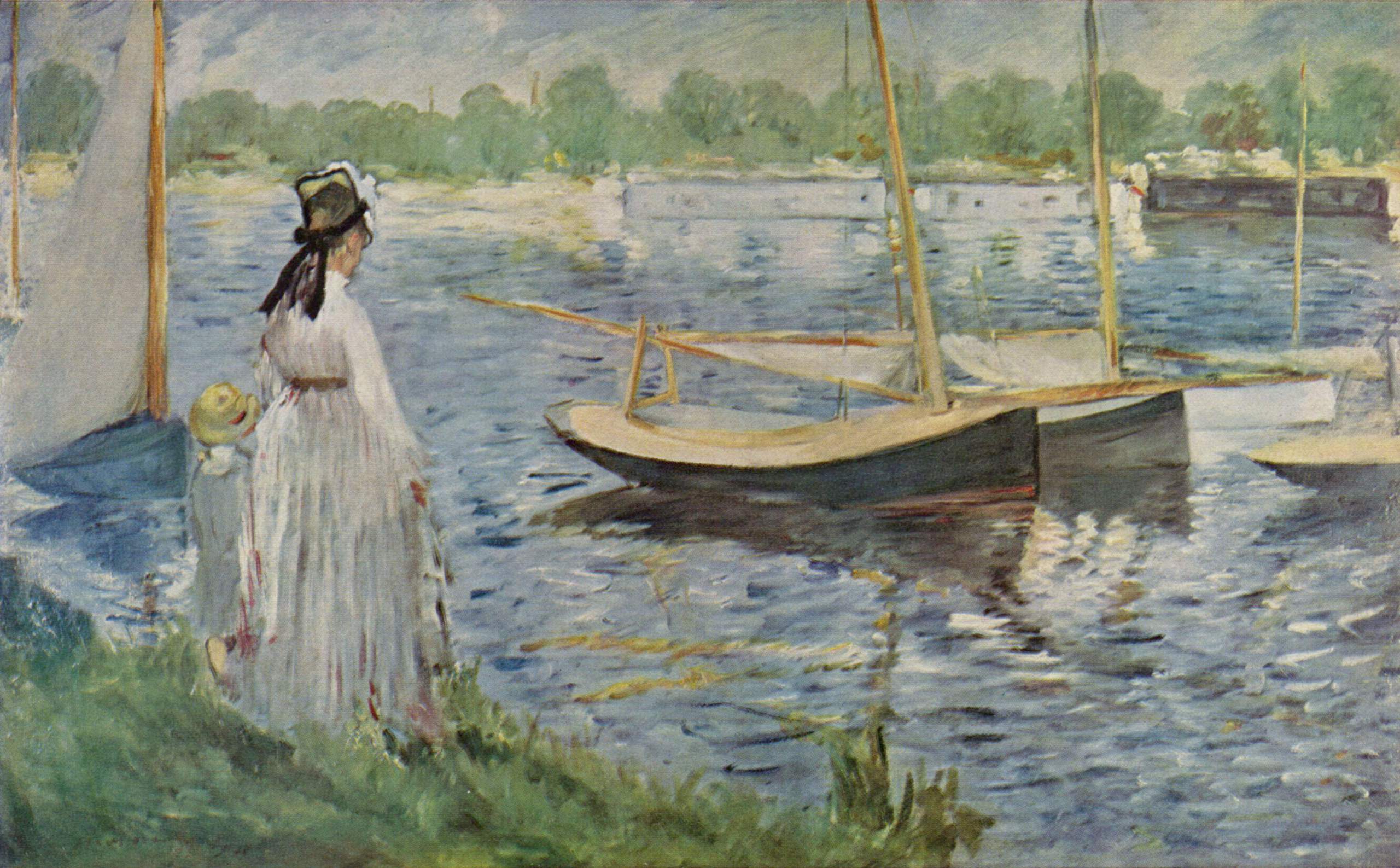 He incorporated an innovative, looser painting style and brighter palette focusing on images of everyday life, such as scenes in cafés, boudoirs and out in the street.

His anti-academic style and modern subject matters attracted the attention of the artists on the fringes and influenced a new type of painting that would diverge from the standards of the official salon. 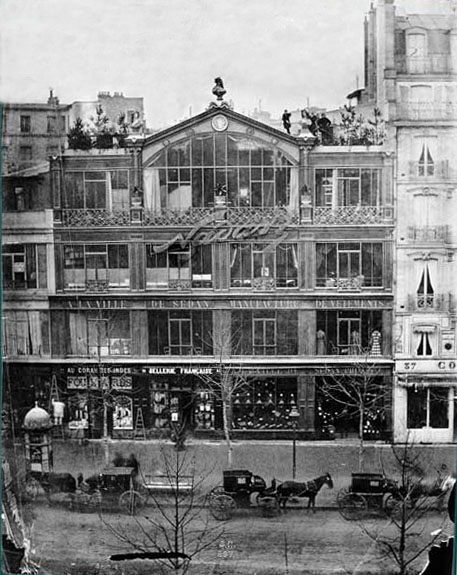 In 1874, a group of artists known as the “Societé Anonyme des Artistes, Peintres, Sculpteures, Graveurs etc.”/ the Anonymous Society of Painters, Sculptors, Engravers etc., mounted an alternative exhibition in Paris that would bring about radical break from artistic conventions and launch one of the most popular movement in the history of art.

All the artists had very limited success financially and had few works accepted in the salon exhibitions in Parisian art scene.

Displaying their works in a vacant former artist’s studio, outside the confines of the famous Salon, the Impressionists presented canvases depicting quiet landscapes, scenes of everyday life, full of loose, expressive brushwork to represent fleeting effects of atmosphere and light.

In that time, these paintings represented something akin to a revolution in the art world.

Eschewing both the subject matters and technique of their predecessors, the Impressionists demonstrated that contemporary life required a new language to represent the radical shifts taking place in Parisian society.

The critics responded with both awe and horror; conservative critics denounced the unfinished, sketch-like quality of their paintings, while more progressive ones welcomed their innovative depictions of modern life.

The movement gained its name after the hostile French critic Louise Leroy reviewing the first major exhibition of 1874, seized on the title of Monet’s painting Impression, Sunrise (1873), and accused the group of painting nothing but impressions.

The moniker was embraced by the group, but they also referred to themselves as the ‘’Independents’’, referring to the submissive principles of the Société des Artistes Indépendents’’ and the group’s efforts to detach itself from academic artistic conventions.

Age of the Impressionists

At that time, there were many ideas of what constituted modernity. Scientific thought was beginning to recognize that what the eye perceived and what the brain understood were two different things.

The Impressionists sought to capture the optical effects of light to convey the passage of time, changes in weather and shifts in atmosphere; a split second of life, a sensory effect of a scene – the impression, an ephemeral moment in time on canvas.

Their art did not necessarily rely on realistic depictions.

Probably the most celebrated of the Impressionists, Claude Monet, was renowned for his mastery of natural light, painted at different times of day in order to capture changing conditions.

He tended to paint simple impressions or subtle hints of his subjects using very soft brushstrokes and pure, unmixed colors to create a natural vibrating effect.

His ‘’wet on wet’ technique produced softer edges and blurred boundaries that merely suggested a three-dimensional plain, rather than depicting it realistically. 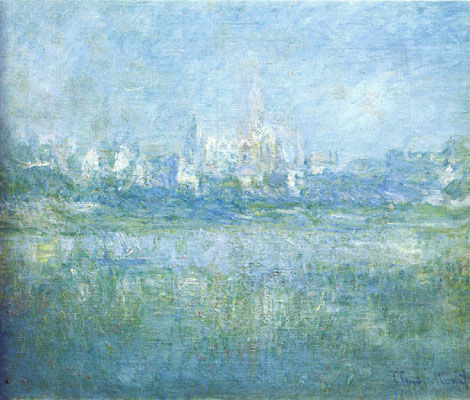 His Vetheuil in the Fog from 1879 is among his finest works, offering a subtle and distinct impression of a figural form. He applied his brush rather quickly to the canvas in order to capture the exact image he wanted before the sunlight shifted or faded away altogether.

This emphasis on the fleeting changes in the natural world was a central aspect of his oeuvre that captures the ephemerality of nature and preserves it within the picture plane.

Monet’s technique of painting outdoors, known as plein air painting, inherited from the landscape painters of the Barbizon School, was practiced widely among impressionists, leading to innovations in the representation of sunlight and the passage of time, which were two central motifs of Impressionism.

L’Absinthe from 1876, by Degas represents a dour scene of two lonely individuals sitting in a café communicates a sense of isolation, even degradation, as they have nothing better to do in the middle of the day. 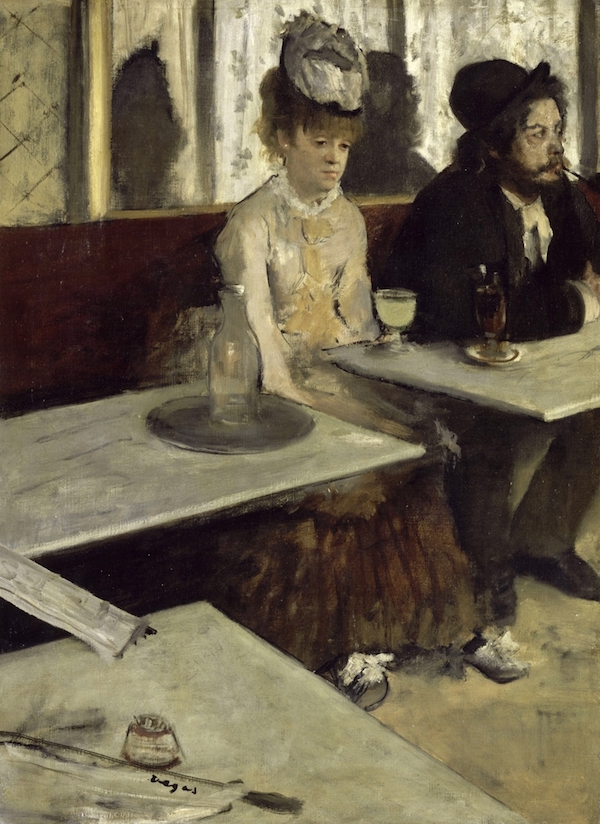 Degas heavily handled paint further communicates the emotional burden or intense boredom of his subjects. This painting, as well as his other works, alludes to the oppressive atmosphere of the city and the psychological ennui of its inhabitants.

Other artists focused on the figure and the internal psychology of the individual.

Pierre-Auguste Renoir depicted the daily activities of individuals from his neighborhood of Montmartre and portrayed the social pastimes of Parisian life, emphasizing the emotional attributes of his subjects, using vibrant, saturated colors, light and loose brushwork to highlight the human form.

In Girl with a Hoop from 1885, Renoir developed a new style he dubbed ‘’aigre’’ (sour), in which he applied thick, elongated brushstrokes complemented by hard lines to portray the young girl in the foreground. 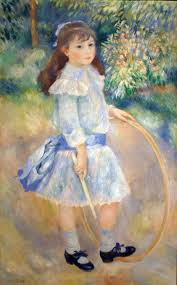 This painting evokes the distinctly carefree mood of much of his work; he focused on representation of leisure activities and female beauty, asserting his disregard for subjects of an overtly critical nature.

Berthe Morisot was the first woman to exhibit with the Impressionists. She made rich compositions that highlighted the internal, personal sphere of feminine society, emphasizing the maternal bond between mother and child in her paintings.

Her work, “In a Park”, from 1874, Morisot combines the elements of figurations with representation of nature in this serene family portrait set in a bucolic garden. 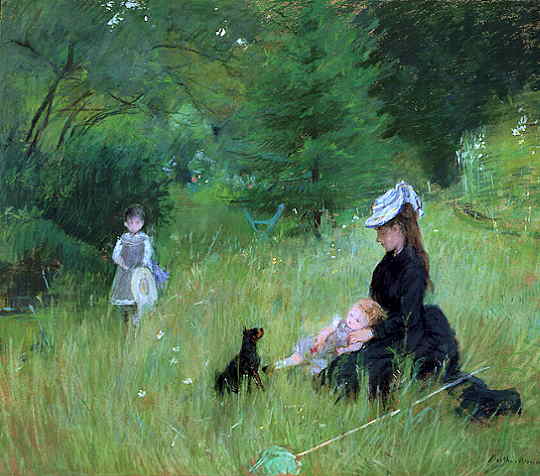 In this quiet image of family life, she centered on the maternal bond between child and mother; her loose handling of pastels, a medium embraced by the Impressionists, and visible application of color and form were central characteristic of her oeuvre.

Together with Marie Bracquemond, Mary Cassatt, and Eva Gonzales, she was considered one of the four central female figures of the movement.

Mary Cassatt depicted a private sphere of the home, but also represented the woman in the public spaces of the newly modernized city.

Her work features a number of innovations, including reduction of three-dimensional space and the application of bright, even garish colors in her painting both of which heralded later developments in modern art.

In her work, “At the Opera” from 1880, she depicts the Palais Garnier of the Paris Opera, which was opened in 1875, and served as a focal point for the city’s social life. 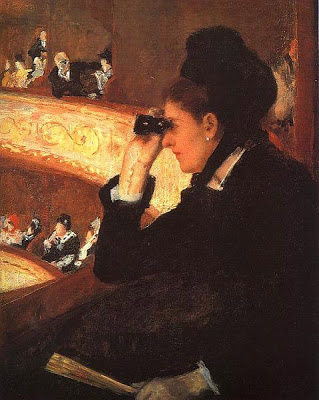 The opera, as the painting demonstrates, was not only a site for culture and entertainment, but also for seeing and being seen. The woman’s binoculars are echoed in the man’s binoculars, across the concert hall, directed at her.

The themes of urbanity are depicted in the work of Gustave Caillebotte, a later proponent of the movement, who focused on panoramic views of the city and the psychology of its citizens.

More realistic in style than other impressionists, Caillebotte’s images depict the artist’s reaction to the changing nature of modern society, showing a flaneur – an idler or lounger who roamed the public spaces of the city in order observe, yet remaining detached from the crowd, in his characteristic black coat and top hat, strolling through the open space of the boulevard while gazing at passersby.

“Paris Street, Rainy Day” from 1877, shows this tendency within his work, through the depiction of the typical urban scene; the panoramic view of the rain-drizzled boulevard presents the newly renovated metropolis, while the anonymous figures in the background emphasize the alienation of the individual within the city. 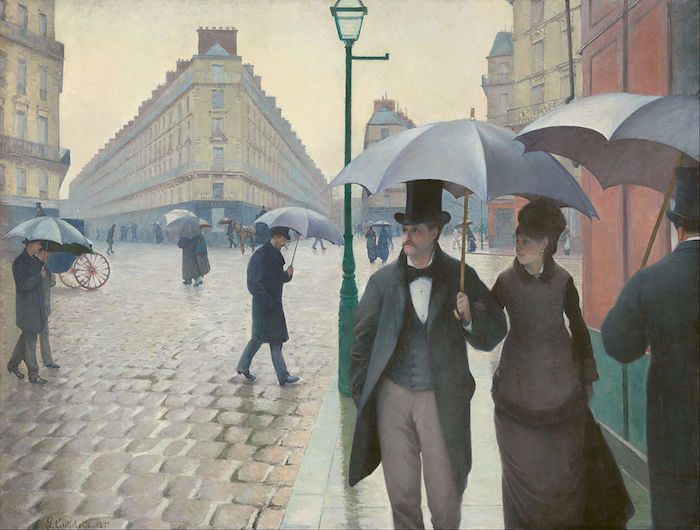 The painting centers on the apathetic gaze of the male figure, who epitomizes the cool detachment of the flaneur.

Also, his work, as well as the works by Pissaro, emphasized the geometrical arrangement of public space through the careful delineation of trees, buildings, and streets.

By applying crude brushstrokes and impressionistic streaks of color, they evoke the rapid tempo of modern life as a central facet of the late-nineteenth- century urban society.

The Impressionists proved to be a diverse group, but they came together regularly to discuss their work and exhibit. Between 1874 and 1886 the group collaborated on eight exhibitions while slowly beginning to unravel.

Many of the artists felt they had mastered the early, experimental styles that had won them attention and wanted to move on to explore other avenues. Others, anxious about the commercial failure of their works, changed course.

Although the last Impressionist exhibition was held in 1886, the movement remains one of the most popular in the history of Western art.

Considered by many to be the first avant-garde movement of the Modernism, Impressionism served as a springboard for many artistic movements of the twenty century. 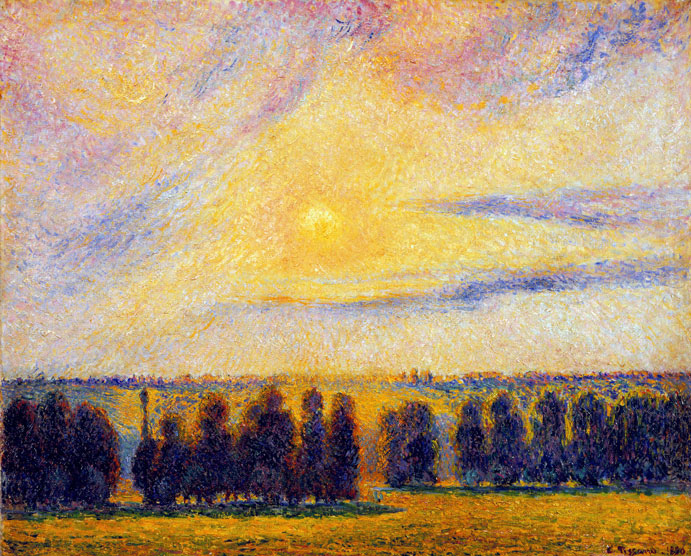 Cézanne learned much from Impressionist technique, but he evolved a more deliberate style of paint handling and a closer attention to the structure of the forms that his broad, repetitive brushstrokes depicted.

He wished to break down objects into their basic geometric constituents and depict their essential building blocks, and this experiment would prove to be highly influential for the development of Cubism and Fauvism.

As Philip Guston once described Abstract Expressionism as a latter-day ‘American Impressionism’; the surface quality, suggestion of light and ‘’all-over’’ treatment of form in Jackson Pollock’s work, all point to the work of Claude Monet.

Although there are many avant-garde movements that did not take stylistic inspiration from the Impressionists, the group’s rejection of an established, state-sponsored style served as a model for similarly independent exhibition groups throughout Europe during the late nineteenth and early twentieth centuries, such as Wienna Secession or Die Brücke in Germany.