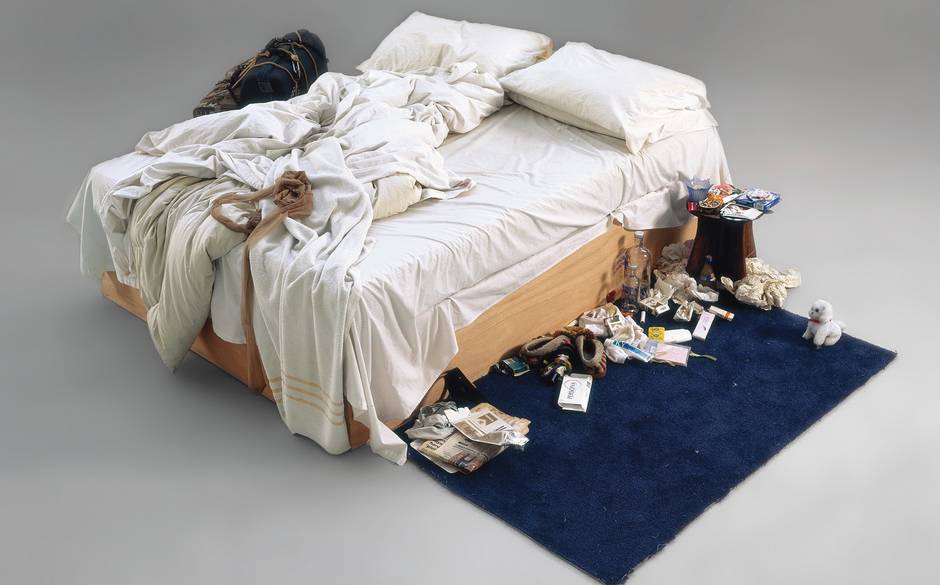 The Young British Artists are a loosely-affiliated group who met in London, in the late 1980s and participated in two of the most shocking exhibits ( Freeze 1988, Sensation, 1997) of the late twentieth century.

The group is known for their use of shock tactics, entrepreneurial spirit and their wild partying during their 1900s heyday. Given the current hype surrounding new British art, it is hard to imagine that the audience for contemporary art was relatively small until only two decades ago. Predominantly conservative tastes across the country had led to instances of open hostility towards contemporary art.

In the 1980’s, London, lagged far behind Berlin and New York. Britain was described as ‘a cultural backwater’ by art critic Sarah Kent. A number of significant British artists, such as Tony Cragg, and Gilbert & George, had to build their reputation abroad before being taken seriously at home.

Furthermore, the art market was hit by the economic recession in 1989; for the thousands of art school students completing their degrees around that time, career prospects did not look promising.

The British capital had far less contemporary galleries and little in the way of a postmodern art scene compared to its more influential, culturally edgy German and American counterparts. In these countries, the artists were involved in cutting edge postmodern movements, such as Neue Wilden, graffiti, street art, Pictures Generation, etc, while there was nothing similar in London.

It was the worrying economic situation, and also the relative indifference to contemporary art practice in Britain, that were to prove ideal conditions for the emergence of Young British Art.

Although the most of the Young British Artists’ members were in their early to mid-20s at the time, they reacted to these challenging circumstances with optimism and stamina. They saw the difficult environment as an opportunity for growth, achieving initial success by putting on exhibitions in the warehouse spaces in the city’s industrial wastelands.

The artists associated with the Young British Artists movement mostly studied at Goldsmiths College of Art in London, in the B.A. Fine Art Program, between 1987-1900.

Goldsmiths differed from other London art colleges in that it no longer kept the traditional boundaries between individual fine art disciplines. The freedom, the breadth of choice and exposure that this afforded, enriched the students in their exploration as artists.

Students were taught to reflect on their social position as artists, to adopt a critical approach to art history and to engage with the art market.

The program leader was the artist Michael Craig- Martin and students were strongly influenced by him and his personal dedication of art as a serious pursuit and belief in the value of creative difference.

He instilled a strong, unwavering work ethics in many of his young students.

The liberal and spirited atmosphere at the college produced a close group of confident young artists, sixteen of whom participated in Freeze, including leading figure, Damien Hirst, and the other, such as, Mat Collishaw, Angus Fairhurst, Gary Hume, Michael Landy and Sarah Lucas.

Diverse in style and practice, there was no formal group and certainly no manifesto for the YBAs. One of the major ties between them was that most of the ‘core’ YBA members had attended the fine art course at Goldsmiths during the mid-1980s to early 1990s.

In 1988, in the lead-up to the recession, a number of fine art students from Goldsmiths College, decided it was time to be proactive instead of waiting for the dealers to call. Seizing the initiative, these young artists started to curate their own shows, in vacant offices and industrial buildings.

The most famous of these was Freeze; and those who took part would, in retrospect, be recognized as the first group of Young British Artists, or YBAs.

Freeze, has now attained near-mythical status as the defining moment of the YBAs’ emergence. It was not the line-up at Freeze, or the exhibited works, but simply the act of self-promotion on the part of the participants that gave the show its significance in the history of British art of the 90s.

Unembarrassed about promoting themselves and their work, the organizers went to great lengths to put on a professional-looking show, and to get the right kind of people – key dealers and promoters – to attend.

Co-founder of the Saatchi & Saatchi advertising agency, Charles Saatchi, played a crucial role in the success of the YBAs. As a famous adman, he is believed by some to favor works with immediate visual impact.

He visited Freeze, although he did not buy any of the artworks, he was very much impressed, and subsequently modified his collecting priorities, to target a younger generation of British artists. He became the modern branded collector and patron of British art.

Key Ideas of the YBA

Marcel Duchamp and his ready-mades’ had paved the way for the group to use whatever they wanted to put in their work and call it art. They have consciously built on the same questions around authorship and originality that the Dadaist had raised at the beginning of the XX century.

Most of the artist of YBAs appropriated found objects in their arts- as visual puns in sculpture (Sarah Lucas), full-sized reconstructions of real environments (Tracy Emin) or appropriation of organic materials to make some statements about life and death (Damien Hirst).

The works of the YBA’s artists are characterized by their open approach to materials and process; it can be attributed to the structure of the B.A. Fine Art program at Goldsmiths College, where many of them studied.

The program courses abandoned the traditional segregation of traditional artistic training into drawing, painting, sculpture and photography classes in favor of mixed studios and it works great!

The YBA’s are notorious for their willingness to shock audiences with the brazen use of pornography, gratuitously violent imagery and their powerful desire to push beyond what many consider the limits of decency.

An important component of their success was the UK tabloid press derogatory coverage, as it was all most people knew of the group.

Postmodernism is characterized by the breakdown of distinctions between high and low culture, the use of appropriation, rejections of fine art materials and a focus on spectacle. These elements can be found in the works of YBA artists.

In that sense, YBAs fit well with the many postmodern experiments that dominated the art of the 1980s and 1990s, in America and Europe.

The Physical Impossibility of Death in the Mind of Someone Living (1991) by Damien Hirst, now often is referred to in art circles as ‘’The Shark’’, is probably most emblematic work of the movement.

It consists of the body of the tiger shark suspended in formaldehyde. The monstrous fish floating in its tank appears alive and dead at the same time. It is typical of Hirst’s brashly conceptual postmodernism and apologetically direct style in the tradition of Dada.

The Shark was commissioned by Charles Saatchi for The Young British Artists Show in his gallery in St John’s Wood, London, in 1992, and was sold in 2004 to collector Steven Cohen for $8 million.

After the shark started deteriorating, Cohen paid for a replacement, raising the philosophical question- whether it could now be considered the same work. As a conceptualist whose focus is on the intention rather than the piece itself, Damian Hirst argued it was, while traditionalist, especially art conservators had a totally different and opposite view.

The Shark, as an art- piece, is one of the most potent examples in pop culture of an artwork that deals so unashamedly with conceptions of death and the greatest human fears, following in the footsteps of artistic greats such as figurative painter Francis Bacon and the romantic artist Francisco Goya.

It became one of the most recognized examples of contemporary art and it symbolizes all that the YBA movement stood for: the use of shock tactics to produce an instant reaction in the viewer, the use of non-art materials and the huge production value.

My Bed (1998) by Tracy Emin, a readymade installation, consisting of her own unmade dirty bed, in which she had spent several weeks drinking, sleeping, eating, smoking and having sexual intercourse while undergoing a period of severe emotional flux.

The piece is typical of Emin’s distinctive brand of confessional art where even the darkest and most embarrassing details of her life are used as artistic fodder for sculptures, installations and drawings.

My Bed was nominated for the Turner Prize for contemporary British art in 1999, and caused a huge controversy in the British tabloid press.

Japanese performance artists Yuan Chai and Jian Jun Xi enhanced the piece’s notoriety when they jumped and pillow fought on it, while it was on display at Tate Britain.

While the media frenzy around the work has assured My Bed a place in the artistic canon, it is also seen as a significant postmodern artwork in its use of non-art materials and its explanation of what it meant to be a young woman at the turn of the twenty – first century, challenging traditional expectations as to how women should present themselves by blurring the boundaries between art and life, private and public.

In 1997, Controversial exhibition Sensation by Young British Artist from the Saatchi Collection was shown at the Royal Academy of Arts (RA), in London.

Such provocative works – Myra in particular – led an angry crowd to demonstrate outside the Academy and prompted the resignation of four RA Members in protest. Meanwhile, ticket sales just kept on rising.

The controversial exhibits drew in a younger audience, who perhaps had never entered the Academy before. Of nearly 300,000 people who attended the show, 80 per cent were under the age of thirty.

Many of the artists originally labeled YBA are now in their fifties continue to make enormously popular art that fetches top prices at auctions.

Amidst the media frenzies and the controversies, the YBA generation has changed the face of British contemporary art practice. . The Turner Prize, established in 1984, began to garner more attention once the YBAs came onto the art scene.

Their diversity of style may partly account for their enduring prominence, even while their well-published social interconnections reinforce their perceived coherence as a group.

Although shock and awe are sometimes the only appropriate response, these artists command our admiration for their sheer honesty. Disdaining the comforting but hollow parable, they opt for reality, in a raw and literal form.