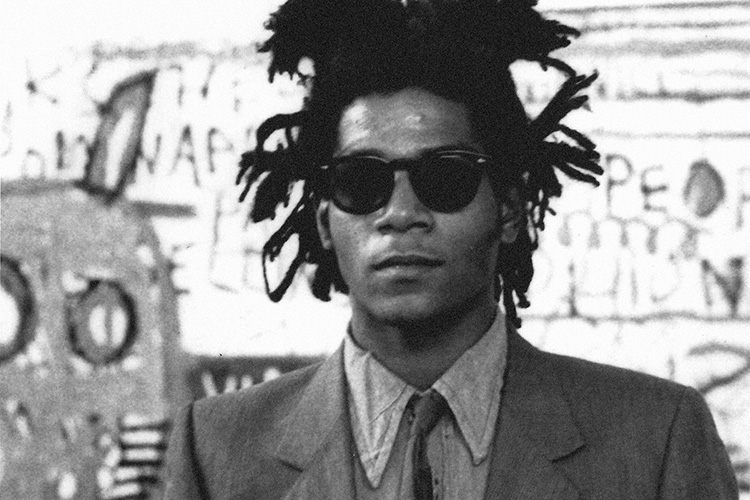 I wanted to be a star not a gallery mascot. – Jean-Michel Basquiat

Jean-Michel Basquiat’s work is one of the rare examples of how early 1980’s American Punk or a graffiti-based counter-cultural practice could become a fully recognized, critically embraced, and popularly celebrated artistic phenomenon. Also, Basquait’s work is an example of how American artists of the 1980’s could reintroduce the human figure into their work after the wide success of Conceptualism and Minimalism, thus establishing a dialogue with the more distant tradition of the 1950s Abstract Expressionism. Despite the “unstudied’” appearance of his work, Basquiat skillfully brought together in his art a host of disparate traditions, styles and practices in order to create a unique kind of visual collage, one deriving, partly, from his urban origins, and in another a more distant, African-Caribbean heritage. Jean-Michel Basquiat was born on December, 22 in 1960, in Brooklyn, New York. He was raised in a middle-class home; his father was Haitian immigrant, with whom he had a difficult relationship and his sensitive, emotionally unstable mother of Puerto Rican heritage.

In his early childhood, learning to draw and paint with his mother’s encouragement, Basquiat displayed an obvious talent. Together they attended New York City museum exhibitions, and by the age of six, Jean-Michel found himself already enrolled as a Junior Member of the Brooklyn Museum.

After the divorce of his parents, Basquiat and his sister lived with their father because his mother having been determinate unfit to care for him owing to her mental instability. This period was extremely difficult for young teenage boy, who eventually ran away from home, claiming physical and emotional abuse.

Troubled by his early childhood, he attended school sporadically, but he finally dropped out of High School, in Brooklyn, in 1978, at the age of 18. Sleeping on park benches, homeless, Jean-Michel supported himself by dealing drugs, panhandling, and peddling hand-painted postcards and T-shirts. Jean-Michel’s art was rooted in the 1970s, New York City-based graffiti movement. In 1972, with Diaz, his artist friend, he started spray-paintings in Lower Manhattan under the name SAMO ( an acronym for Same Old Shit), painted anonymous messages and statements .

The anti-religion, anti-politics, as well as anti-establishment credo packaged in an ultra-contemporary form, SAMO soon received media attention from the counter-culture press. Citing artistic differences, Jean-Michel Basquiat and Diaz chose to severe their collaboration, with the three-word announcement- SAMO is dead.

Carried out episodically at various cities as a piece of ephemeral graffiti art, the phrase surfaced repeatedly on walls and buildings throughout Lower Manhattan. At one time a sign of trespassing and vandalism, graffiti in the hands of Diaz and Basquiat became a tool of artistic ’branding’ repeated here and there throughout the billboard- dotted city, ‘’SAMO is dead’’ slowly took on the status of a corporate mantra, such as for instance ‘’Seeing is Believing’’. In June 1980, Basquiat’s work had included in the historic punk-art Times Square Show, and in 1982, he had his first solo exhibition in SoHo, at the Annina Nosei Gallery.

Jean-Michel early canvas-based work, Untitled (Skull), from 1981, features a patchwork skull, a sum of incongruent part; it seems to be the pictorial equivalent of Mary Shelley’s Frankenstein. Suspended before a New York City subway map-like background, the skull is at once a contemporary graffitist’s riff on a long Western tradition of self portraiture and the signature piece of some anonymous, streetwise miscreant.

Basquiat’s recent past as a gritty curbside peddler, virtually homeless floater, and occasional nightclub interloper are all equally stamped into this troubled three-quarter profile, making for a weary icon of the displaced Haitian and Puerto-Rican immigrant forever seemed to remain even while successfully navigating the newly gentrified streets that were SoHo, in the 1980s.

The Artforum article by Rene Ricard, named The Radiant Child, published on December, 1981, solidified Jean-Michel position as a formidable figure in the international art world.

Basquiat’s persona and talent might have been made to order for a moment when the prestige of international Neo-Expressionism tricked down to the streets and clubs on East Village, and social mobility became talismanic in art even as it declined in society.

1982 was a crucial year for Jean-Michel – he opened six solo exhibitions in cities worldwide and became the youngest artist ever to be included in Documenta, the international contemporary art prestigious event held every five years in Kassel, Germany.

He developed a signature motif: a heroic, black oracle figure with crown. Among Basquiat’s inspirational precursors were Sugar Ray Robinson, Dizzy Gillespie and Muhammad Ali; the portraits are sketchy and Neo-Expressionist in appearance, capturing the essence rather than the physical likeness of their subjects.

The ferocity of Jean-Michel’s technique, dynamic dashes of line, and the slashes of paint, presumably revealed his subjects’ inner-self, the hidden feelings and their deepest desires. The hundreds of paintings he created in 1982 mirrored the roaring spirit of a time that, after depressive seventies, had discovered the bliss of art, tremendous amount of money in rapid circulation, fashion, and other forms of concerted indulgence.

Flexible, from 1982, features two of Jean-Michel’s most famous motifs: the venerable crown and the griot. A black figure, half cadaver, half living entity, stares ‘’blindly’’ at the viewer; the subject takes on the visage of the Everyman, with few distinguishing characteristics.

This figure is not just any figure, but one of African ethnicity and proud heritage, a clear reference to Basquiat’s own identity. A West African griot, also, features heavily in Basquiat’s work of the Neo-Expressionist era.

Given that the griot is traditionally a kind of wandering philosopher and street performer, as well as social commentator all in one, it is more likely that Basquiat saw himself in this role within the New York art scene- one that nurtured his artistic success, but also swiftly exploited it for material profit. Basquiat, at the height of his fame in the 1980’s, was undoubtedly loved in the way that charismatic celebrities are envied and loved. One of his admirers was Andy Warhol, if not in love in Basquiat, certainly desired him, and was his champion at a crucial moment in Basquiat’s ascendance.

Arm and Hammer II, from 1985, demonstrates how Basquiat and Warhol would pass a work between them for their mutual intervention, like a game of chance happening, free association, and mutual inspiration. Warhol’s typical employment of corporate logos and advertising copy as shorthand signs for the materialistic modern psyche is frequently overlaid by Basquiat’s only partially successful attempt to deface them, or ‘humanize’ them, freehand, as though he were vainly railing his first at a largely invisible and insidious monster. The other collaboration, for instance, The Ten Bunching Bags (Last Supper), 1986-87 was originally intended to be displayed in Milan directly across the street from Leonardo da Vinci’s Last Supper.

Opposite the Renaissance masterpiece Ten Punching Bags was to function, playfully, as a ‘’call to arms’’ for contemporary art against all forms of ideological oppression. It is in the nature of all styles to burn out, but none perish as abruptly and irrecoverably as the precocious. Basquiat was in for a painful artistic crisis even if he could have kicked drugs and developed choirboy habits.

As it was, the toll of his bad choices was exacerbated by exploitative dealers and collectors, corrupt companions, and the inevitable backlash that follows extravagant public success. Increasingly addicted to heroin and cocaine, Jean-Michel died on August, 12, 1988, at the age of 27.

A product of the hyped-up 1980’s Basquiat and his work continue to serve for many observers as a metaphor for the dangers of social and artistic excess. Indeed, Basquiat’s life and career adhered to a classical trajectory of rise, fall and doom though with an unusually sunny epilogue.

Like a superhero of a graphic novel, Jean-Michel seemed to rocked to fame and riches, and then, fall back to Earth.

Not only do his paintings now sell for ever more millions at auction; serious critical appreciation and art-historical validation, withheld from him in life, are coming around. Basquiat turns out to be the essential American Neo-Expressionist painter of the early nineteen-eighties, the one who made the most of that time’s revival.