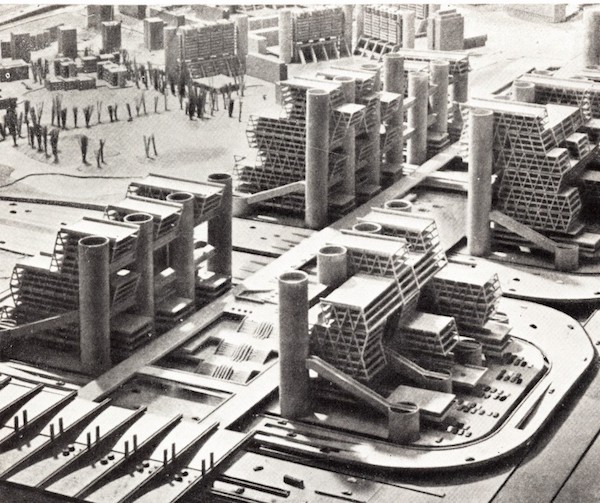 ” We live in a world where great incompatibles co-exist: the human scale and the superman scale, stability and mobility, permanence and change, identity and anonymity, comprehensibility and universality’’

Born in Osaka, Japan on September 4, 1913, Kenzo Tange was one of the foremost architects of the twenty century.

He was considered a genius for the buildings he designed throughout his prolific career. He designed more buildings in his lifetime than legendary architect Frank Lloyd Wright. 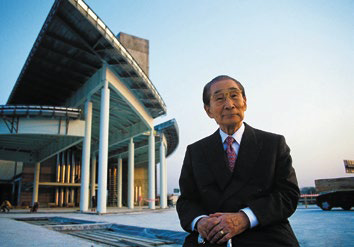 Growing up in the small city of Imabari, on Shikoku Island, he became interested in architecture during high school, but he wasn’t the best math student, so he had to work extremely hard to get into a university.

In 1935, he was accepted to the University of Tokyo’s architecture department. Three years after, he got his first job under Kunio Maekawa, a well-known Japanese architect at that time, who had practiced with Le Corbusier in his Paris studio in the late 1920s.

During his studies, he won an architectural contest, which earned him solid reputation at the university. He set up his own studio, through which such remarkable architects as Kisho Kurokawa, Arata Isozaki and Fumihiko Maki passed, learned, contributed and flourished. 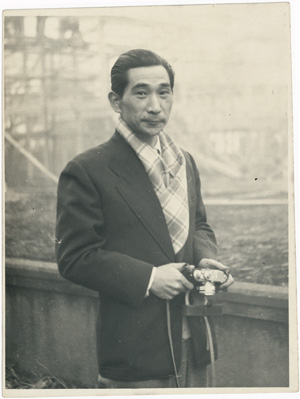 Postwar architecture in Japan, while widely eclectic and international in scope, has seen its most dramatic achievements in contemporary interpretations of traditional forms.

In general, Japanese architects of the 20th century were fully conversant in Western style and active in developing a meaningful modern style appropriate to Japanese sites.

Before getting his first real break as an architect, Tange worked as an urban planner. In 1949, his first major commission came after he had won an architectural contest for the design of the Hiroshima.

The commission was symbolic: the replanning of the city of Hiroshima after its destruction by Little Boy, the atomic bomb dropped by the USAF B-29 Enola Gay on August 6, 1945. 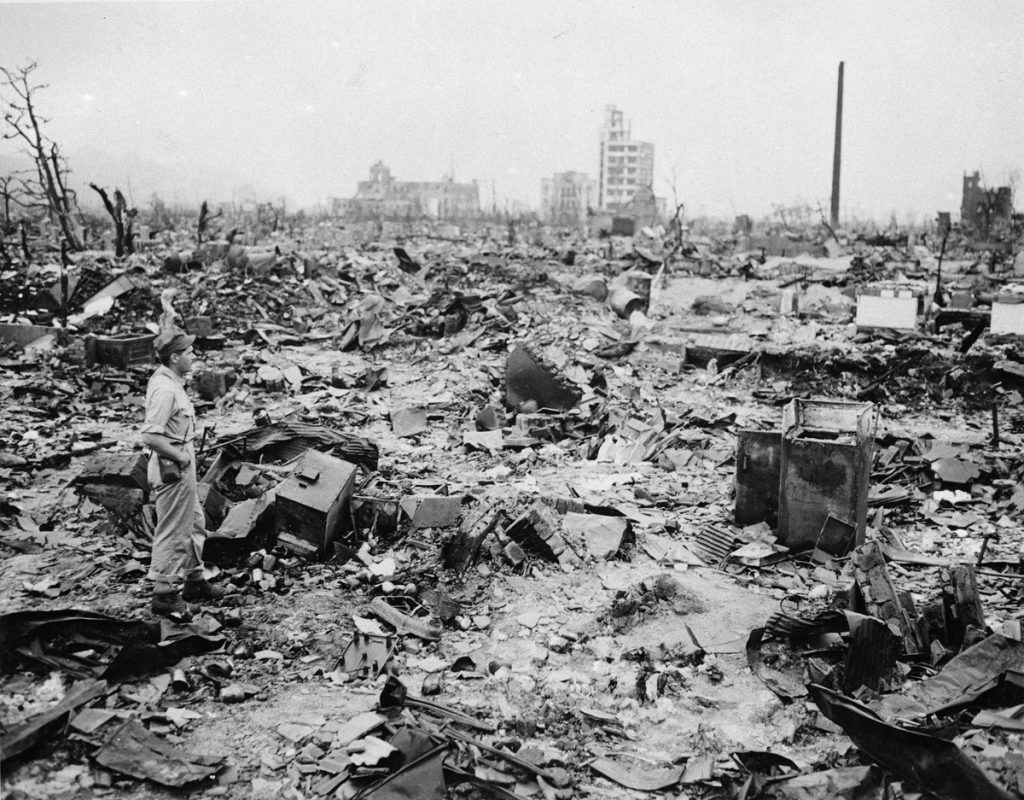 At the heart of the Hiroshima, Tange helped design Hiroshima’s Peace Memorial Park, its peace centre (1950) and museum (1952), they are among his best known early works.

Peace Memorial Park, located at the epicenter of the atomic blast, contains a museum and monuments dedicated to those killed by the explosion.

The cenotaph for victims of the bombing is shaped like an enormous saddle, resembling the small clay saddles placed in ancient Japanese tombs; it contains a stone chest with a scroll listing the names of those killed.

Kenzo Tange designed the museum and cenotaph and two peace bridges at the park were sculpted by the American artist Isamu Noguchi. 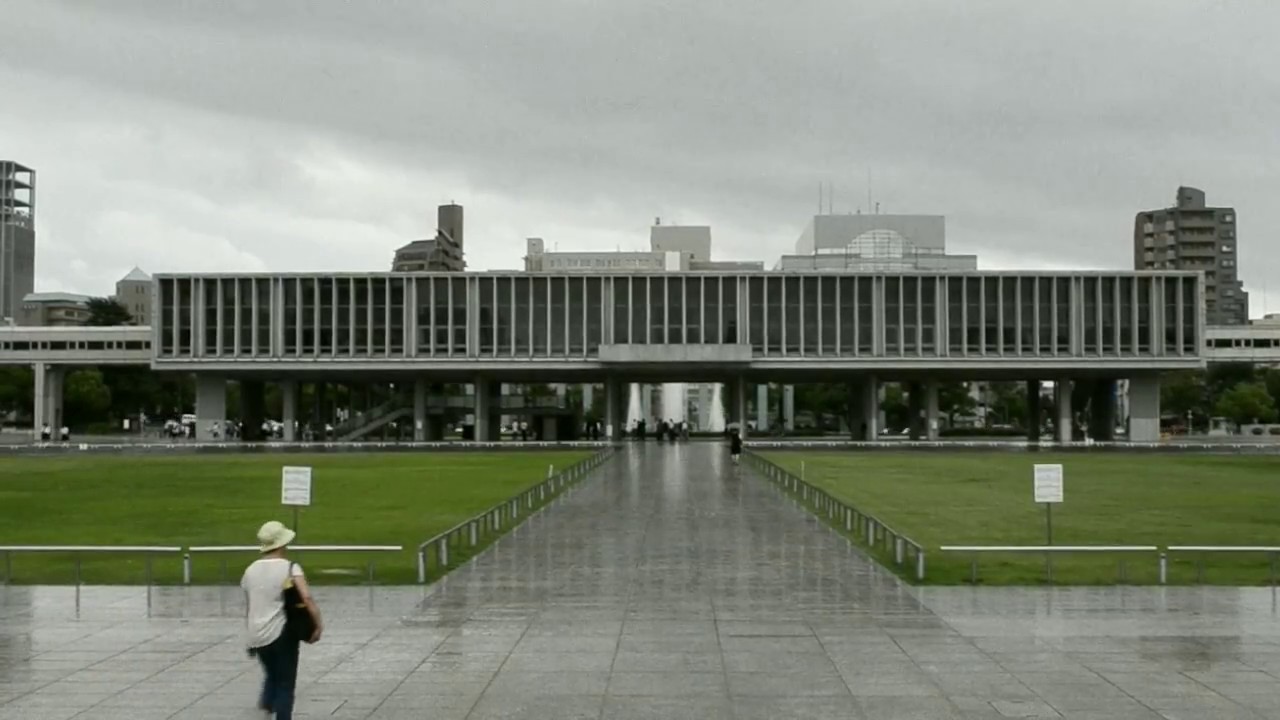 The Peace center, raised on stilt-like, Le Corbusier-style columns, faced by a monument that combined ancient forms and the latest structural technology.

The fusion was a symbol of the new Japan; traditional Haniwa tomb and a concrete hyperbolic parabola resolutely looking to the future while proudly recalling the best of its pre-imperial past.

From here, Tange became an integral component in the rebuilding of Japan after the devastation of World War II.

As Le Corbusier long dreamed of rebuilding the centre of Paris, so Tange worked long and hard on a comprehensive and highly contentious, redesign of his country’s capital city.

In the years that followed, he designed an outstanding series of public buildings, including the Tokyo Metropolitan Government Office (1957), the Shizuoka Convention Hall (1957), city halls at Kurayoshi (1957) and Kurashiki (1960) and the Kagawa prefectural offices( 1958), latter being considered a particularly fine examples of the blending modern and Japanese traditional architecture.

Most of these early structures were conventional rectangular forms using light steel frames.

Tange’s work during the 1960s took more boldly dramatic forms with the use of reinforced concrete and innovative engineering.

He launched Japanese architectural movement, Metabolist school or Metabolism, with his Boston Harbor Project design (1959), which included two gigantic A-frames hung with ‘shelving’ for homes and other buildings.

Led by Tange, Kikutake Kiyonori, Isozaki Arata and Kurosawa Kisho, the Metabolist focused on structures that combined high-tech imagery, Brutalism and megastructures as multifunctional complexes that verge on self-containment.

Their advocacy of such devices as artificial land platforms above cities, which grew out of a desire for economy of land use, revolutionized architectural thinking.

They believed that cities should be built to account for future changes. The solution was modular, prefabricated capsules that could be attached to the core of a main structure.

The Nakagin Capsule Tower in Tokyo designed by Kisho Kurosawa is the perfect example of this very architectural style. 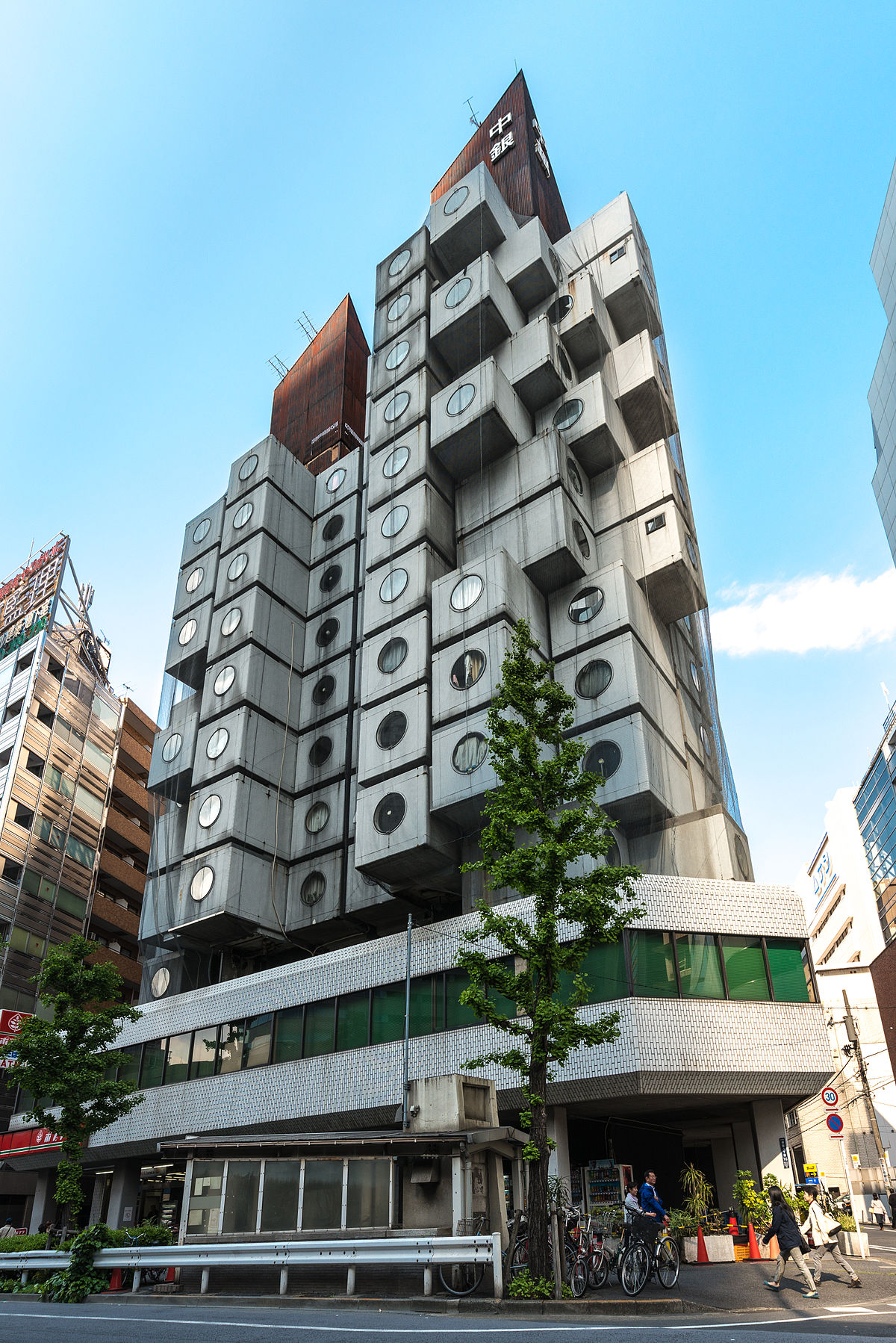 Tange’s plan for Tokyo from 1960 received worldwide attention. He presented a master plan for a floating city in Tokyo Bay at the 1960 World Design Conference; the plan was unlike anything architects had ever seen before.

In practice, it would have meant projecting the city out over the bay, using man-made islands connected by proliferation of bridges, and characterized not by buildings as such, but by eye-boggling concrete megastructures. 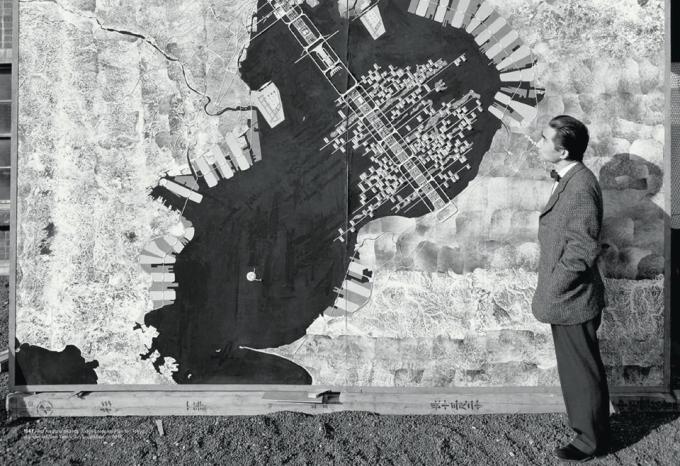 Although never realized on the scale Tange had intended, Tokyo, these great concrete concatenations were influential in Western Europe, especially in Britain, encouraging a generation of architects who preferred sheer scale and raw concrete, and were labeled ‘brutalists’ by the critic Reyner Banham.

For many of them, Tange Kenzo was the godfather of 1960’s Brutalism.

His most successful brutalist design, the Yamanashi press and broadcasting centre, was a samurai fortress brought into the late 20th century, as well as a modern concrete megastructure.

Although seems all off a piece, this was a determinedly indeterminate building in the sense that, theoretically at least, its 16 massive cylindrical towers, housing the centre’s services, could be greatly extended, while yawning gaps left between occupied floors could be filled in with future offices and studios as required.

Nowadays, these gaps have been filled in with roof gardens and terraces, adding to the enigmatic and unexpectedly romantic quality of this powerful design.

For the 1964 Olimpic Games in Tokyo, he designed the Yoyogi National Stadium; the two structures featured sweeping curved roofs and an asymmetrical, but balanced design that masterfully assimilated traditional technique.

The structures evoke early agricultural and Shintō architectural forms while retaining refreshing abstraction. Many lauded Tange for the surreal beauty of the stadium. 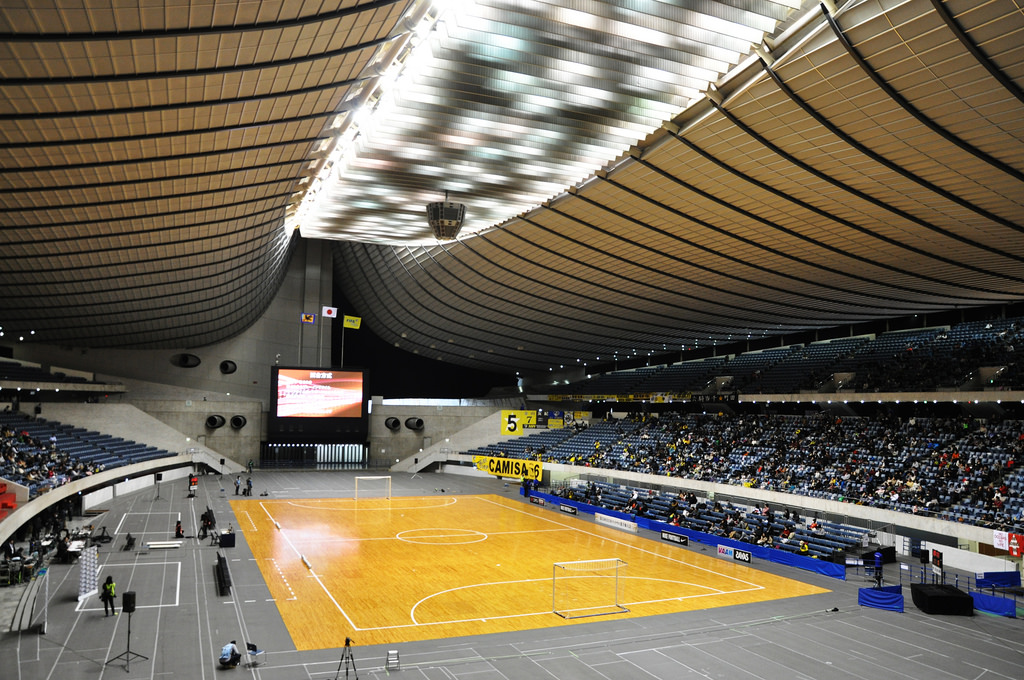 At the same time, he designed and built the Santa Maria Cathedral in Tokyo.

In the last half of his career, Tange designed plenty of buildings in Japan, and fulfilled important overseas commissions.

Outside Japan, Tange was overly modern; he was responsible for the design of some of the most notable buildings including embassies and university buildings in Saudi Arabia, Taiwan, Iran, Algeria, the Kuwait International Airport, Supreme Court of Pakistan, Singapore’s National Library, Santa Maria Cathedral in Tokyo, Chicago’s American Medical Association Building, and the master plan for Skopje, the capital city of Macedonia.

In his later structures he built up combinations of smaller geometric forms into an irregular but functionally attentive whole. 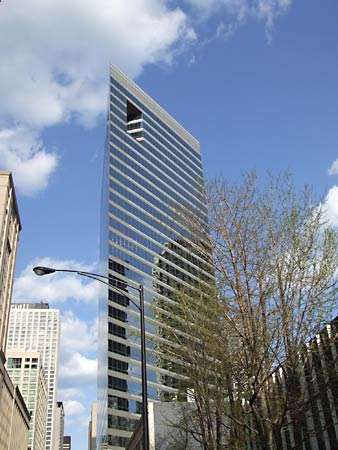 The most significant and influential figure in post-war Japanese architecture, Tange was profoundly influenced by the work of Corbusier.

If Tange began by imitating the late-flowering, sculptural concrete designs of the Swiss-French genius, he gradually went on to create a body of internationally recognized work that was very much his own, fusing the very latest in structural daring with the traditional Japanese forms.

An often profound thinker and respected teacher in Japan, Canada, and the United States, Tange continued working until his last days, although he retired from practice in the 1990s, and imaging how architecture could be convincingly reconciled with the very latest communications and buildings technologies.

He had disliked the willful excesses of postmodern designs in the 1980s, and watched cautiously as a new wave of gratuitous bendy, twisty buildings sprouted from city skylines worldwide in the 1990s.

He was quietly optimistic considering these fashionable affectations to be no more than ‘transitional architectural expressions’, an accusation it would difficult to level at the Yamanashi press and broadcasting centre or the National Gymnasium, Tokyo.

Teacher, writer, urban planner and architect, he is revered not only for his own work but also for his influence on younger architects. 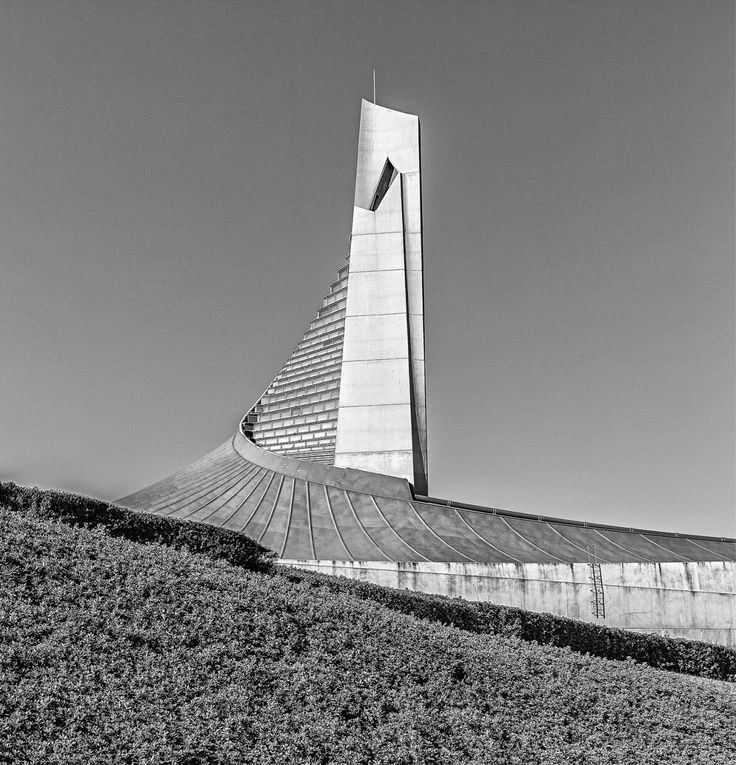 Tange’s constant adaptation of his building designs was praised by many, and he was awarded the Pritzker Prize in 1987. According to the Washington Post, the jury that chose him for the honor ‘’called him a leading theoretician of architecture’’.