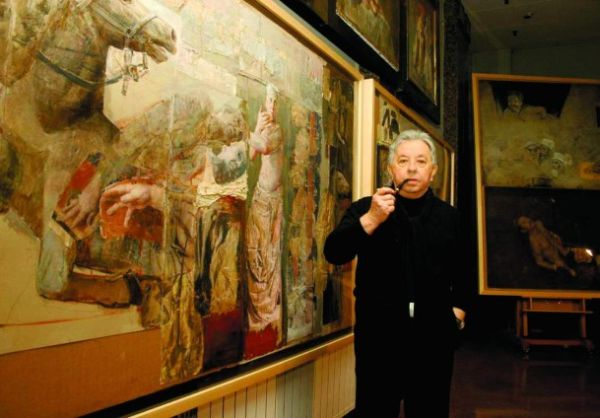 Mersad Berber, one of the greatest and most distinctive Bosnian painters and graphic artists, was born on January, 1, 1940 in Bosanski Petrovac, a small town in western Bosnia in former Yugoslavia.

Few months after his birth, due to the large massacre in Petrovac in the 1940s, the Berber family arrived to Banja Luka as refugees to escape the fighting as the World War II spilled over into the Balkans. Berber’s father had a hair salon for women in the centre of Banja Luka, and his mother was a gifted weaver, one of the greatest in Bosnia.

She worked in the tradition of Bosnian carpets, which have deep Anatolian roots, and she established school for carpet weavers at the end of her life.

The young Berber inherited his mother’s artistic talent; his skills as a draftsman became apparent from a young age- from his early adolescence he was producing remarkable drawings and painting on paper.

In 1959, Mersad Berber began his formal art education at the Academy of Fine Arts in Ljubljana, Slovenia.

According to his own word, he owed permanent gratitude to several of his professors; Bozidar Jakac, a classic of Slovenian graphic art, and Zoran Krizisnik, a brilliant curator and founder of the famous Ljubljana International Biennale.

Krizisnik included him in the Yugoslavian selection when he was a second year student, and his etching master Bozidar Jakac, with whom he learned etching privately, alongside his studies at the Academy.

In 1961, his works were exhibited at the Ljubljana Graphic Arts Biennale, one of the prestigious art events of the period, along with works by the leading graphic artists from all over the world.

Berber’s early drawing and prints demonstrated the influence of the academy in terms of technique, and, in the other hand, his interest in expressing cultural traditions using a modern visual expression in terms of subject matter.

He received the prestigious Prešern Award for his work.

In 1963, the young artist started a postgraduate course in graphic arts in professor Rika Debeljak’s class. His choice of that very technique was to significantly mark his entire opus.

Since 1965 and his first solo exhibition at the City Gallery of Ljubljana, the career of this remarkable artist has been on sharp rise.

The artistic scene in former Yugoslavia, also in that of Tito’s successor Slobodan Milosevic, had been characterized not by anything resembling Soviet Socialist Realism but by a tepid adherence to middle-of-the-road modernist styles.

Very few artists managed to create reputations for themselves outside their own region. Berber’s success in breaking out of this situation was altogether exceptional. In 1978, Berber received a teaching at the Academy of Fine Arts in Sarajevo, and set a a studio there. By that time, he had already achieved considerable international recognition, mainly as a graphic artist.

This comfortable existence and professional career was abruptly torn apart by the wars that broke out Yugoslavia in 1990’s, just over a decade after the death of Marshal Tito, who had held that region together. During the war in Bosnia and Herzegovina 1992-1995, Berber’s house and studio were destroyed.

The Berber family escaped in Croatia on a UN transport plane. In order to rebuild his life, he created a new studio in Zagreb, and another one in Dubrovnik. However, memories of the war continued to haunt him, but provided material for his art. A wide array of Berbers’s works range from the deep, opaque whites influenced by his travels to Bosnia’s fairy-tale landscapes to the dark and terrible pits of Srebrenica.

His inspiration mostly originates from the mystical world of Bosnia, its Ottoman past, and the tragic venture of its people.

Inspired by the masters of European fine arts from the Renaissance to Art Nouveau, with the artists such as Velazquez, Ingres or Klimt, as well as Yugoslavian painters Vlaho Bukovac and Gabrijel Jurkic, Berber’s work infuses intricate talent and expressive powers. Berber’s work gives a good idea of the breadth of his cultural interests, but the frequent fragmentation of the images also makes it clear that these are the product of an extremely contemporary sensibility.

His paintings, etchings and prints include elegant female portraits, based on High Renaissance prototypes, with which he challenged the 16th century masters of the Venetian school; painting of horses which recall his love for the peasant life of the Bosnian countryside; paraphrases of Velazquez, which express his profound admiration for the great Spanish master. Throughout his career, he made cycles of paintings which chronicle homages, events and dedications. His works are characterized by the intermingling of ancient motifs with a modern and contemporary commentary.

He employed a very wide variety of artistic techniques, from the most traditional to the most contemporary.

For instance, he made a couple of small animated films, and was fascinated by the possibilities offered by new techniques of digital printing, sometimes producing prints of enormous size.

In most of the Berber’s works, the central metaphor is the horse figure, a key symbolic animal which has many different representations and meanings in various cultures.

In Berber’s own words, this figure is not that of an impressive horse, it is a toiling packhorse from the mountains of Bosnia, having deep ties to all aspects of life, signifying hard labor and marriages, wars and funerals.

The expressive capacity of this horse, its suffering and its imperfect beauty represent the biography of Bosnian people. Berber is known for his mixed technique large canvases, but he differs from the European masters from whom he derived his inspiration by virtue of innovative approach to composition and his unique themes.

His paintings frequently do not deal with single image but with conjunctions of images, in some cases places side by side, but in others layered one on the top of the other.

He felt a strong allegiance to the values of Italian Renaissance art, because of its resemblance to the art of the Italian Pittura Colta movement, which derived from the later work of Giorgio de Chirico.

Yet, Berber’s paraphrases of elegant images of classical nudes, some of them are direct quotations from the work of David or Ingres, and of Renaissance portraits, were often interspersed with figures in old-fashioned Balkan dress. His religious and literary references were also strong and complex. Some of his most impressive works offer directly Christian images, for instance the figure of Christ being taken from the Cross.

Others were inspired by the Sarajevo Haggadah, one of the most important Jewish medieval manuscripts in existence and now the chief treasure of the restored Sarajevo National Museum (Zemaljski Muzej).

In his work he reflects the full scale of the complexity of his country’s multi-layered cultural history as the pioneer of the generation of young graphic artists who opened up the local art scene to global trends. Towards the close of his life, Mersad Berber made an impressive series devoted to the brutal massacre at Srebrenica, the genocide and the worst crime of the Balkan wars, in which over 8,000 Bosnian Muslims, mostly boys and men, were slaughtered by units from the Army of Republika Srpska, under the command of general Ratko Mladic.

The artist regarded the tragedy at Srebrenica as the “big, ancient, sacred theme of hymns” and laboured for years to depict it in his works, collecting forensic reports, newspaper photographs, video recordings, documents and books, and visiting Potocari and Srebrenica countless times.

These series became elegies not only for those who had died, but also for the death of multiculturalism, which had survived in the Balkans for centuries despite all ethnic and religious animosities. Mersad Berber died from heart attack on October 7, 2012 in his home in Zagreb.

He also worked in theatre scenography, created movie posters for movies, such as those by Kusturica; his costume and scenography design came to life in theatres in Sarajevo, Zagreb, Ljubljana and Washington.

He exhibited all over the world, from London to Madrid, New York to Moscow, Jakarta and New Delhi, and received approximately 50 awards. Some scholars and experts consider him to be one of the greatest post-Classic artists in the world.

Today, Mersad Berber is one of the most famous graphic artists in the world, who was also included in the Tate Gallery Collection in 1984, makes the aesthetic and ethical identity of his homeland recognized to the million of people. He deserved his celebrity reputation because he made heroic efforts to get with the history of the region he was born and lived in with his own personal relationship to that history.

With his unique talent that lets him forge connections between different cultures and tradition, and his intelligence that penetrates the depths of historical experience, Berber brought together styles spanning the range from antiquity to the contemporary era in a manner that was very much his own.