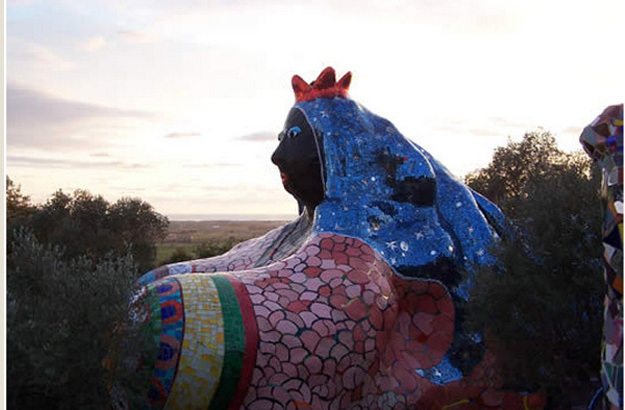 In 1960 I was a very angry young woman. Angry at men and their power. I felt that they had robbed me of my own free space in which I could develop myself.

I wanted to conquer their world, to earn my own money. Angry with my parents who I felt had raised me for the marriage market. I wanted to show them that I was somebody, that I existed and that my voice and my scream of protest as a woman was important.

I was ready to kill.

Niki Saint Phalle’s unique brand of feminist art expressed both jouissance and angst in equal measure, and explored the complex and confounding ways in which biology and culture co-construct the female experience.

She was born on October, 29, 1930 to an aristocratic Catholic family as a second of five children; her father André was a wealthy French banker, and her mother Jacqueline Harper was an American, but raised in French.

Soon after her birth, facing with aftershocks of the Black Tuesday, the French wing of the Great Depression, the Saint Phalle’s lost their fortune; her father was forced to close his finance company and they moved to the United States.

From an early age, Niki pushed the boundaries in her personal and artistic life. She attended the prestigious Brearley School in New York, which she found to be a formative experience for her, and a place where she became a feminist.

However, she was expelled for painting the fig leaves covering the genitals of statues on the school’s campus red.

When she was 18, Saint Phalle eloped with Harry Mathews, a person that she knew through her father.

Both of them were artistically inclined, oversensitive, overtly rebellious romantics, and they bounded together as such. While Mathews studied music at Harvard University, Saint Phalle began exploring painting, and gave birth to their daughter Laura in 1951, when she was 20 years old.

In 1952, the couple moved to Paris, where Mathews continued to study music, learning to become a conductor, while Niki studied theater to become an actress, and she was also modelling for Elle and Vogue. 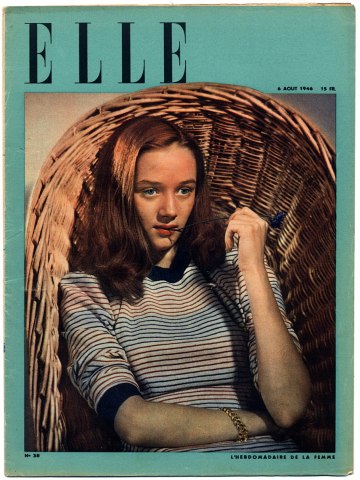 The following year, Saint Phalle was diagnosed with a nervous breakdown, and hospitalized in a psychiatric facility.

At this point of her life, she had gone through a violent nervous breakdown, caused by the facts she had married young and somehow accepted the conservative values and the lifestyle of her family that she wanted to reject so badly.

Niki was first treated with a barbarous treatment, a series of electric shocks, but luckily, she ended up in the hands of a humane psychiatrist who restored her to mental health.

She was encouraged to paint as a form of therapy; somewhere in between the shocks and analysis, she began doing her first collages, and soon after that her first paintings.

They were so original and compelling, that her husband, following her energetic example, gave up all thoughts of a musician career and began writing for the first time since 1949.

The couple moved to Majorca off the coast of Spain, where their son Philip was born in 1955. During this time, Niki developed her imaginative, self-though style of painting, experimenting with a variety of materials and forms.

During the visit to Barcelona, she was stuck by the work of Spanish architect Antonio Gaudi and his park Güell, which was instrumental in Niki’s early conceptualization of the elaborate sculpture garden she would fulfill much later in her career. 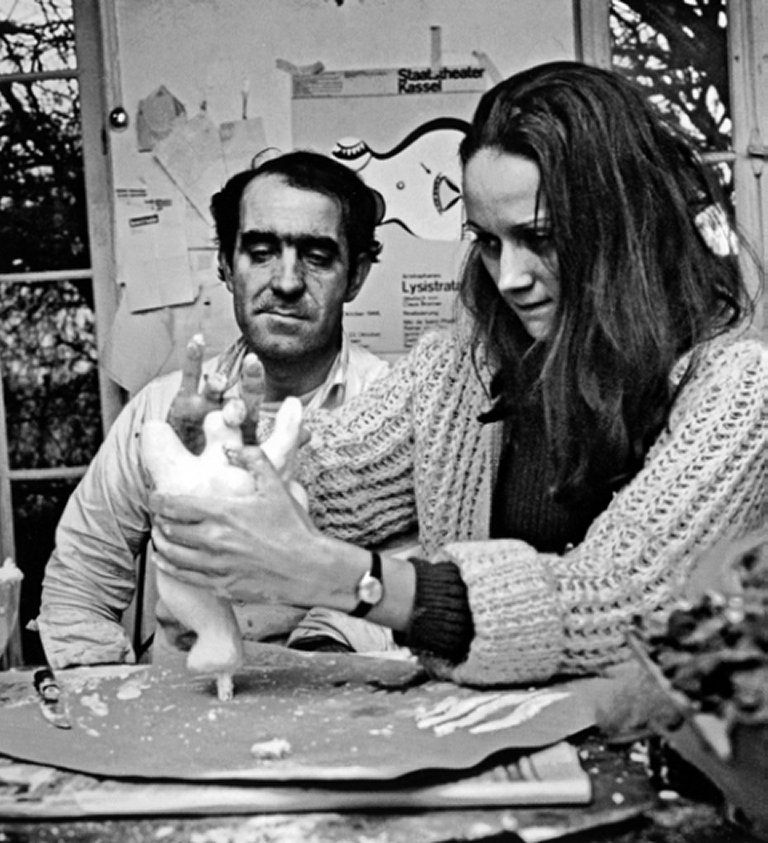 At the end of the 1950s, Niki and her husband moved back to Paris; in 1960, she divorced Mathews, giving him the custody of their children. She met artist Jean Tinguely, with whom she would collaborate artistically; within a year, they had began a romantic relationship, and eventually married in 1971.

Niki Saint Phalle’s first solo exhibition in 1961, punctuated a dynamic period of her early career and she met a number of influential artists living in Paris at that time, whose use of found objects was to have a strong influence on her work.

On show were several of her Shooting Paintings. They were made by fixing polythene bags of paint to a board, and covering them with a thick plaster surface. Viewers were invited to shoot a rifle at the surface, popping the bags and causing the paint to run down the textured white surface.

The process of creating the artwork became a live performative event done in the public eye, and with the public’s participation, challenging traditional perceptions of the artist as a hermetic figure. Shooting Paintings involve the viewer directly and physically in the creation of the work, and leave the resulting image to chance. 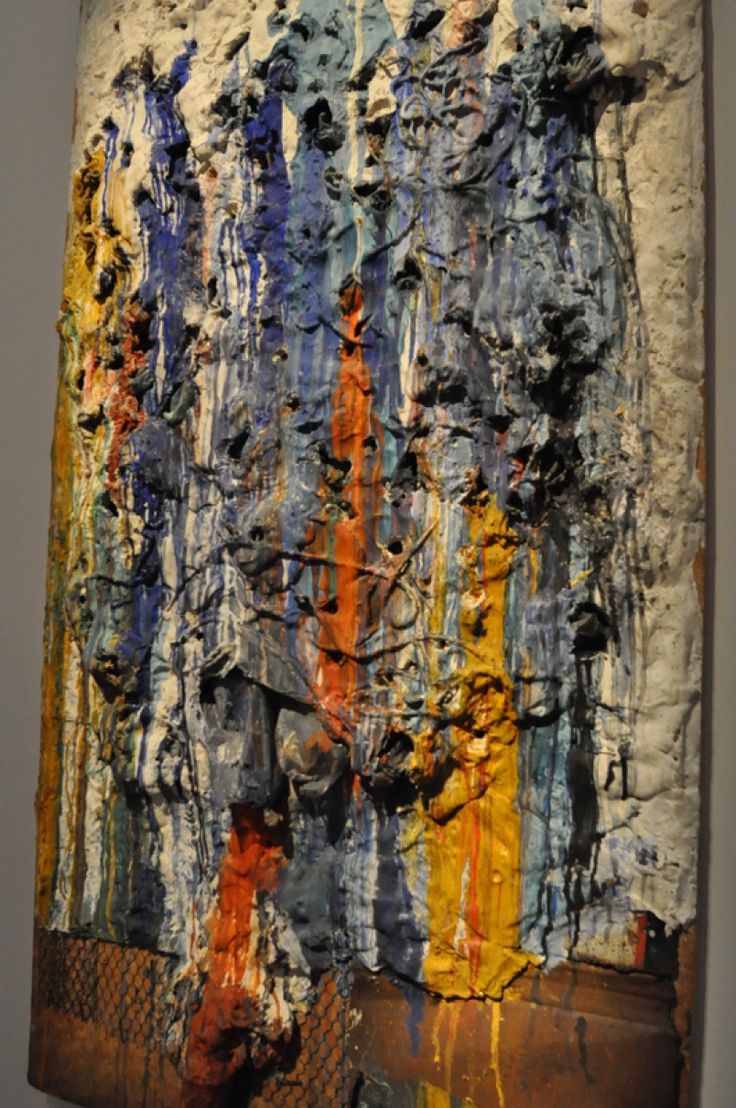 In this period, Saint Phalle’s artistic work had become a bold act of defiance, reclamation of space for herself, and for women. She started to articulate these ideas and combining them with other social and political issues‒ amidst an atmosphere of radical ideas, from civil rights, anti-war and anti-violence protests to campaigns for women’s rights and sexual liberation across the West.

The Crucifixion piece, from 1963, an abstracted female figure, is made from found objects and fixed on the flat surface of the wall. It partly resembles to the method of sculptural assemblage, a combination of collage and sculpture that brings in a third dimension by adding elements that project out of a planar, two-dimensional surface. 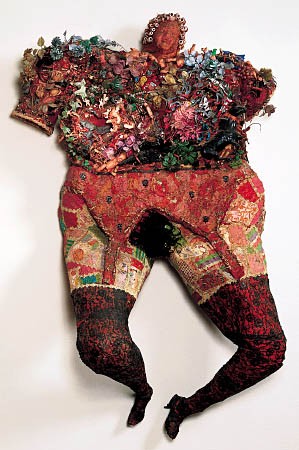 The work responds to the genre-blending of mid-century abstraction and expresses Saint Phalle’s attitude towards the female condition, which she saw as a highly ambiguous and contentious state.

The figure comprises together suggestions and formal elements of the constructed, biological-cultural stages of womanhood: youthful and sexualized, maternal and abundant, elderly and confined.

The figure has no arms, indicating a lack of female agency and disempowerment within a society that strongly delineates woman’s roles in accordance with diminishing reproductive capacity.

Her most famous and prolific series of works, the Nanas, were inspired by a friend’s pregnancy, her reflections on archetypal feminine forms, and the vexed positions that women occupy in modern, patriarchal societies. 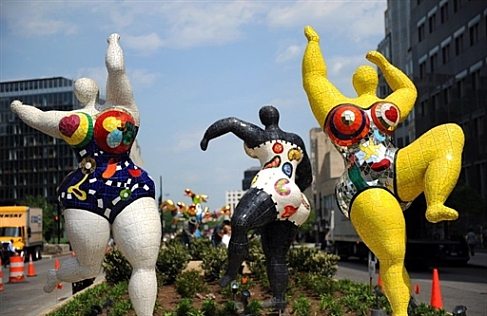 ‘Nanas’, a French slang word roughly equivalent to ‘broads’, is a title that encapsulates the theme of the everywoman as well as the casual denigration that closely accompanies the rhetorical grouping of women as a social category.

The Black Venus (1965-67), a large-scale sculpture presents a non-traditional view of the goddess figure and does not conform to the stereotypes of female beauty established by Western classical art, and does not recall sculptural goddess form of the Ancient Western world.

Instead, the figure is large-limbed, black-skinned, actively in motion, and adorned in a colorful, cartoonish bathing costume. 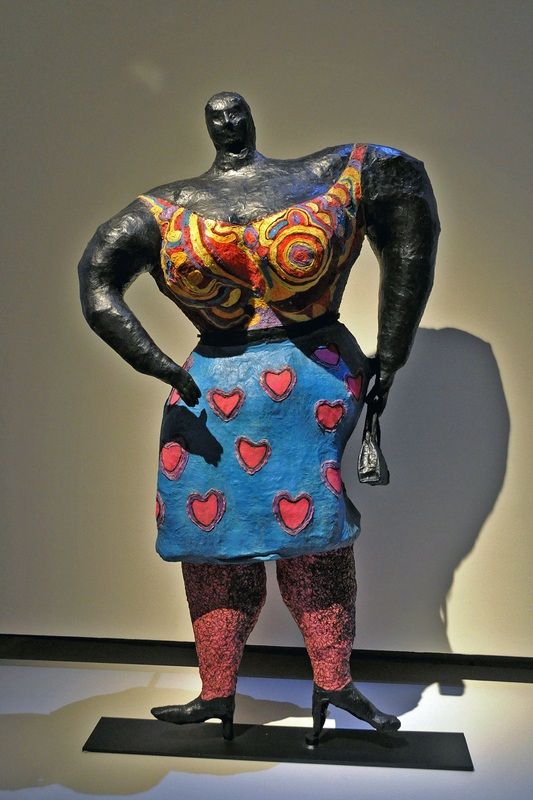 In 1966, she collaborated with Tinguely and Olof Ultvedt on a project for Moderna Museet in Stockholm, Sweden. The trio created a large installation Hon-A Cathedral, the largest nana figure; the installation provoked a strong reaction from the public.

It is a large-scale sculptural work which viewers could enter from the vaginal opening, and could hold up to 150 people at a time. ‘Hon’ is the Swedish word for ‘she’, implying that the sculpture is both a symbol for the every-woman and a cathedral-like space for the worship of woman and femininity.

Its structure references classical architectural theories about the entrance to cathedrals and their metaphoric and symbolic relationship to female genitalia. The feature also presents the woman’s body as a place of exchange and creation, a generative space of new life by way of its exit.

That was also the period when Niki worked on Le Paradis Fantastique, a commission for the French Pavilion at Expo Montreal, Canada in 1967.

While she was working on this project with Tinguely, St Phalle’s lungs were severely damaged by polyester resin toxic fumes. Her favorite material, polyester, was the cause of her recurring health problems. 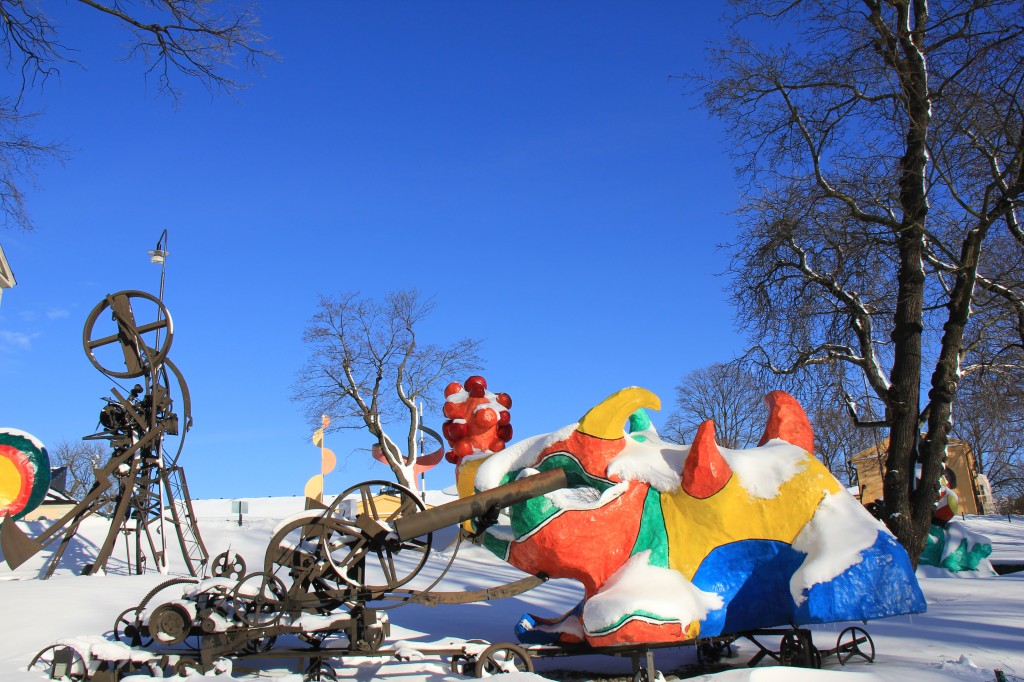 During the early 1970s, she spent some time in the Swiss mountains recuperating from a serious lung illness. In Swiss, Niki met childhood friend, Marella Caracciolo Agnelli who was a well-connected socialite with a penchant for collecting art.

Saint Phelle told her about her vision of creating elaborating sculpture garden of Tarot symbology. With Agnelli’s help, she acquired a parcel in Tuscany, Italy. In 1978, the foundations were laid, and two years later, the construction of the first sculpture began;

The Empress, an enormous sculptural building designed in the shaped of a sphinx, became her home and studio for the next decade.

Elaborately decorated with mosaics and ceramics on the outside and Venetian glass on the inside, the work maintains the aesthetic of assemblage used in many of her earlier works. 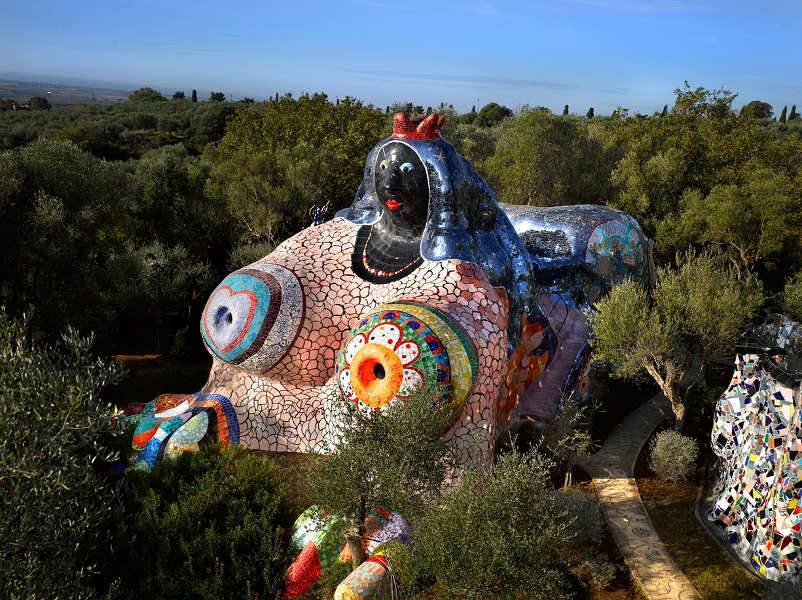 Niki spent many years completely immersed in the creation of her dream place. After nearly 20 years of intensive work, financial and health problems, the garden was opened in 1998. It contained vibrant mosaics and colossal sculptures, based on the Tarot cards symbols.

Tarot is an ancient, venerable set of cards, with picture representations of archetypal, elementary situations upon them. They described existential, human experiences and psychic states. Saint Phalle was deeply convinced that the cards have a considerable meaning. 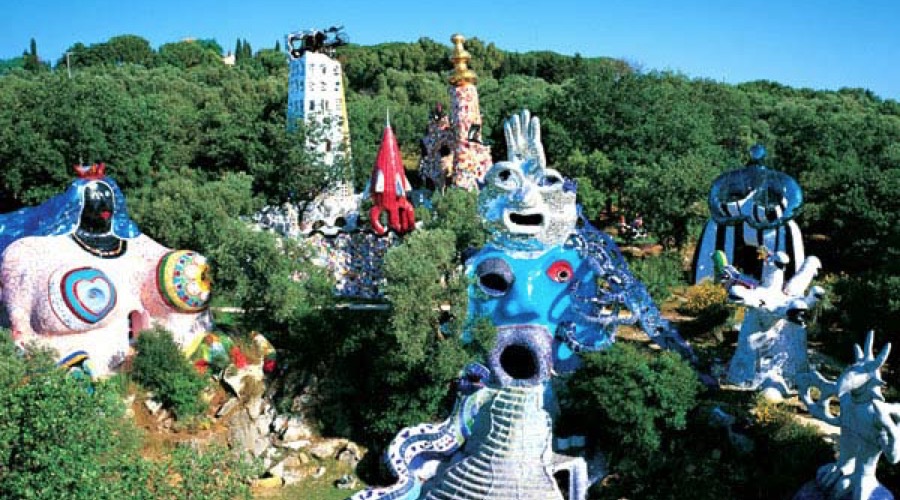 She saw the Tarot Garden as a site which crosses boundaries into the religious and where everyone is potentially able to have a direct experience of the archetypal content of the Tarot.

The idea came from Antonio Gaudi’s Park Guell, but the garden became much more than a simple variation on Gaudi’s concept. It was her absolute, on-going concern, and a deep, captivating theme for life.

Jean Tinguely died in Switzerland, 1991, and Saint Phalle began to make a series of kinetic sculptures, his chief sculptural medium, to honor his memory.

The Grotto, Hanover (2001-2003), the final instalment in a series of semi-architectural works accessible to public is the last project Saint Phalle worked on before her death.

This particular cave was originally built in the baroque style in 1676 as a place for members of the Hanover court to escape the heat.

Niki was invited to turn the space into an immersive art environment; she created a design in response to the formal qualities of the existing architecture, and maintained the original function of the Grotto.

Grotto consists of three rooms, each decorated in different style. The central room’s (‘Spirituality’) walls feature a spiral of yellow, gold and orange mosaic pieces made of glass and ceramics, along with river pebbles and seashells.

The room on the right is set against a field of dark cobalt blue, inspired by the work of Henri Matisse. 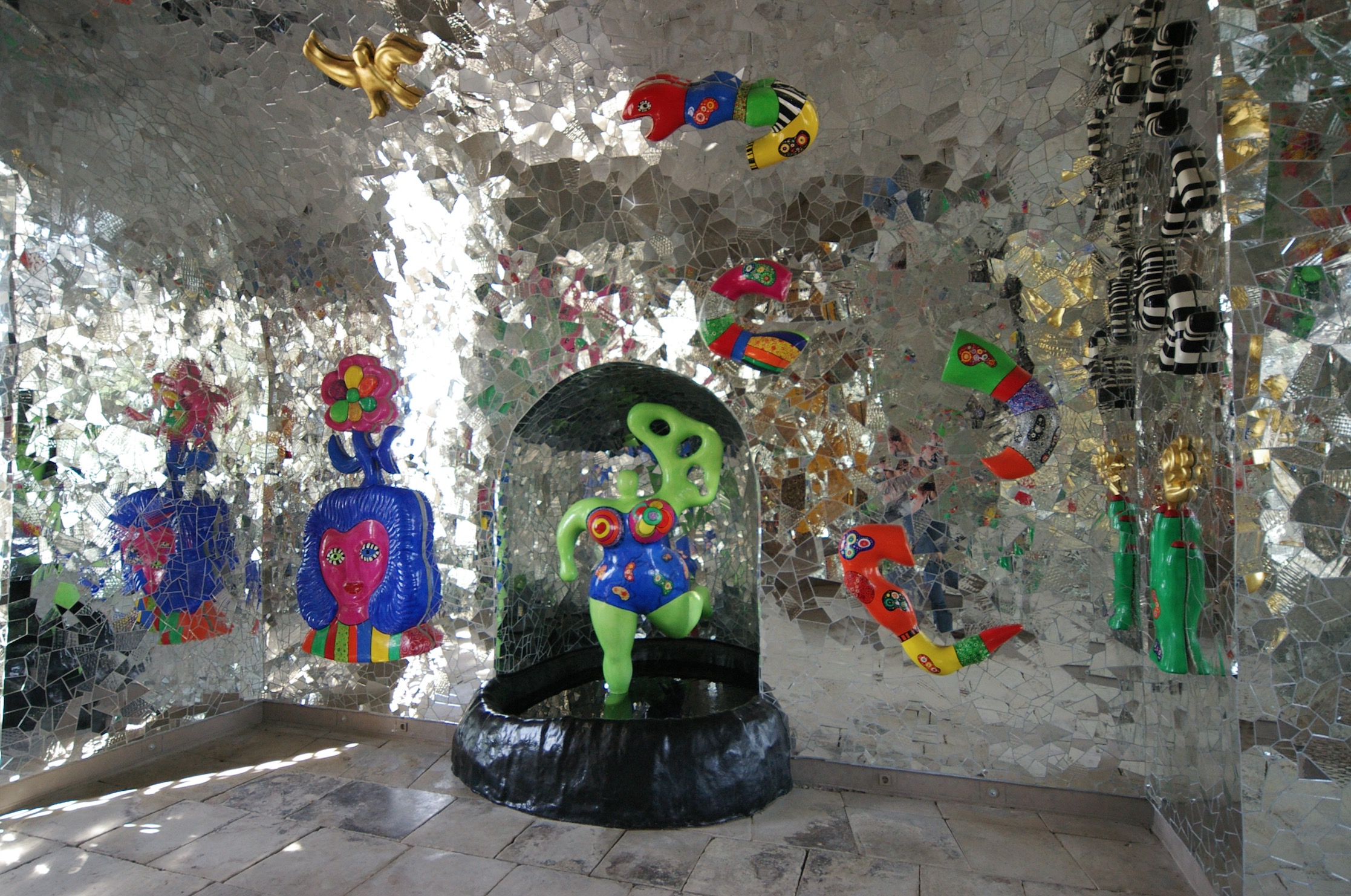 The final room is bright and full of silver shards of mirrors, creating an impression of continuous daylight inside the dark cave. The room features sculptural figures in a range of styles from across Niki’s career, acting as a form of retrospection of her oeuvre.

Niki Saint Phalle died on May, 21, 2002, after six months in intensive care in La Jolla, California. Her death was caused by emphysema, a chronic obstructive lung disease.

Saint Phalle continually disrupted long-held conventions in art; her iconoclastic approach to her identity and society at large made her an early and important voice to both the development of early conceptual art and the feminist movement.

Her work often combined plastic art and performance in new ways, blending and dismantling hierarchies between sculpture, painting and performance in a way that would influence conceptual artists and their thinking toward developing new and hybrid forms rather than refining single-medium-specificity.