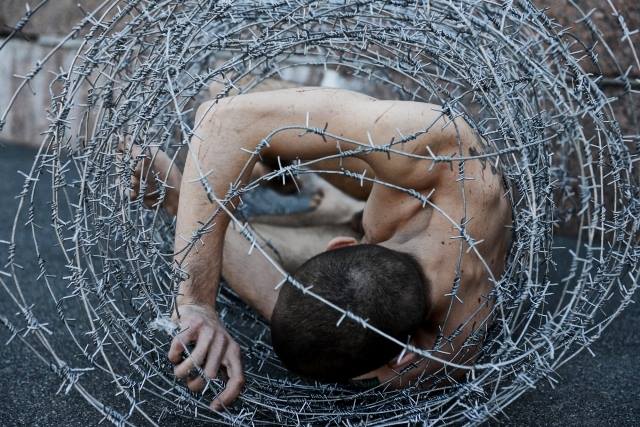 “I think that would have discredited everything I’d done before, if at the first sign of danger I’d gone into hiding. So I decided to take a position of strength, because there is nothing to be afraid of.

You can be afraid if you feel you are guilty of something and I don’t. Anything the authorities do against me means discrediting themselves. The more they do with me, the worse they make it for themselves.”

Saint Petersburg native Petr Pavlensky has already made a name for himself as one of the most intriguing figures on the contemporary Russian art scene, and, at the same time, as one of the most well-known performance artists in the world. His works have a real social impact; he definitely played a significant role in addressing the cases of human rights violation in contemporary Russia.

What remains controversial is the way the artist explores the boundaries of the body and its resistance to pain in his works.

Concerning Pavlensky’s private life, there are not too many pieces of information that are available to the public or the artist himself desires to make his work speak for him.

Pyotr Pavlenskiy was born on the 8th of March 1984 in Leningrad in Russia. He attended at Saint Petersburg Art and Industry Academy for studying monumental art, which he described as a ‘disciplinary institution that aims to make servants out of artists’.

He also took training at St Petersburg Pro Arte Foundation for Culture and Art during his fourth year at the Academy.

In 2013, the publication is awarded the Alternative Prize for Russian Activist Art. Aside from exposing control and repression in Russia, Petr Pavlensky also talks about more universal issues: how the body is simultaneously socialized and objectified and whose biological survival is completely dependent on others.

Since 2012, he has carried out several public actions, now well- known in the world.

Petr Pavlensky became noticed for sewing his mouth shut as a sign of protest against the imprisonment of the Pussy Riot, a Russian feminist punk rock band.

It was the artist’s first extreme performance came in 2012 on July 23. Pavlensky appeared at Kazan Sabor in St.Petersburg, holding a banner that stated: ‘Action of Pussy Riot was a replica of the famous action of Jesus Christ’ (Mattew: 21:12-13)’; his lips was sewed up.

Pavlensky’s photo taken during this protest for Pussy Riot took the world by the storm. He became a symbol of fighting against political repression.

However, it was a troublesome situation with police and Pavlensky was taken to a mental institution for a psychiatric examination.

Ultimately deemed as sane person, he was released soon after ‘the public incident’. The focal point of the radical protest was highlighting the lack of regard for artist in Russia.

According to Pavlensky’s own words, his intention was not to surprise anyone or came up with something unusual, but he felt that he had to make a gesture that would accurately reflect his situation. One of the most extreme performances that Petr put into action is The Carcass from 2013 (May 3).

It was another political protest against repressive government policies. In this very performance, he had assistants who brought him naked and wrapped in a cocoon of barbed wire, placing him in front of the Legislative Assembly of Saint Petersburg’s main entrance.

Lying still in a half-bent position, the artist remained silent; he did not react to anything around him remaining in that state until the police came and freed him from the barbed wire’s grasp.

Petr Pavlensky later explained the meaning behind The Carcass: the human body is naked like carcass; there is nothing on it except the barbed wire which was invented for protection of livestock.

These laws, like the wire, keep people in individual pens; the metaphor of the action had its immediate realization in the reality: as soon as the barbed wire was cut off, and the artist was freed from it, the same wire wrapped him back in with police, ambulances and numerous field investigators.

All this has been done in order to turn people into gutless and securely guarded cattle, which can only consume, work and reproduce. The arguably most notorious performance piece by Pavlensky came on November 10, 2013.

While sitting naked on the stone pavement in front of the Lenin’s Mausoleum on the Red Square, the artist hammered a large nail through his scrotum affixing it to the street. The timing was intentionally decided- the protest coincided with the Russian Police Day.

The idea for this very action came when the artist was briefly held in a cell after the Carcass stunt. A fellow prisoner regaled him with stories of the Gulag, where prisoners had sometimes nailed their scrotums to trees in an act of protest at the inhumane conditions and miserable existence.

The artist said his action titled Fixation was a metaphor for the apathy, political indifference and fatalism of modern Russian society. Pavlensky had a blanket thrown over him by the confused police officers and was eventually detached from the stones and taken to hospital.

He was discharged that evening, and released by the police without charge- only for them to open case of ‘hooliganism motivated by hatred of a particular social, ethnic or religious group’ a few days later.

It is the same article of the law that was used against Pussy Riot and can carry a jail sentence of several years.

The Segregation from October, 19, 2014, the same year was directed against political use of mental illnesses and against putting political prisoners into mental institutions.

While sitting totally naked on the roof of the infamous Serbian Center, where various experiments on political prisoners falsely diagnosed with mental illness took place, Pavlensky cut off his earlobe with a chef’s knife.

On February 23, 2014, the artist organized protest supporting the Ukrainian Revolution; the action was named Freedom.

Pavlensky along with his friend built an imitation barricade on Tripartite Bridge in Saint Petersburg and burned it down, beat drums and shouting Maidan slogans.

The performance was interrupted by Saint Petersburg police and the group was arrested; they were held for two days until the administrative case against Pavlensky and his assistants was dropped.

On the night of November, 9, 2015, The Lubyanka’s Burning Door was happened; artist doused the front door of the Lubyanka Building with gasoline and set fire to it with a cigarette lighter.

The Lubyanka Building is known as the headquarters of the Russian Federal Security Service. The Lubyanka’s Burning Door was the reason behind Pavlensky’s arrest and the most serious charge he ever stood against.

He was charged with vandalism and debauchery. Simultaneously, a video appeared on the Internet with an explanation of the meaning of the event: Pavlensky chose Lubyanka as a symbol of political oppression in Russia.

It was a place where victims of the Stalinist purges were tortured in the 1930s, among other things.

The next day, the artist asked to reclassify his crime as an act of terrorism, which was opposed by his defendant who claimed that as a lawyer she could not ask for a more severe punishment for her client.

Pavlensky was charged with a half million Ruble fine, officially for destroying ‘the national heritage’ which was nonsense considering the doors were new. Once again, he exposed the court and authorities’ helplessness against political crimes and manifestations which they fear most.

Marat Guelman, an influential critic and gallery owner called Pavlensky’s act ‘the artistic equivalent of setting yourself on fire’. He said it was a gesture of hopelessness and desperation.

We all more or less share this position; people have been forced into a corner- the choice is between leaving, going to prison or joining up with those in power. In Pavlensky’s mind, his actions are less a helpless cry of anguish than an aggressive statement of defiance. His performances are not only a protest against the system, but also a protest against people’s apathy.

Escaping the long arm of Russian justice by going on the run was never an option for Pavlensky.

The same impulse informs his art. Whenever he does a performance, he never leaves a place. The authorities are in a dead-end situation and don’t know what to do; they can’t do anything with a man inside barbed wire.

Eventually, Pavlensky was made to go into exile in France due to the still unproven rape allegation.

Petr Pavlensky takes inspiration from a long line of Russian protests, especially the ‘Moscow activism’ school of the 1990s and the protest group Voina, who were known for their outrageous activist art.

Two of the original Voina artists formed the punk collective Pussy Riot who with their art, activism and mix of music also chose Red Square for one of their first performances, in 2011.

Afterwards, Pussy Riot would stage their fateful action in the Cathedral of Christ the Saviour, which would see three of them stand trial for ‘hooliganism motivated by religious hatred’.

According to his words, this trial affected Pavlensky more than many things in his own life and he began understanding the need for a more radical approach to art.

Pavlensky’s unusually painful brand of art comes from an imperative impulse toward radicalism.

He states an artist has no right to take a stand; the artist cannot exist just be isolated and contemplative.

Could we ever draw a line between productive artistic aggression and simply going too far? How extreme is too extreme? Pavlensky’s methods can be objected to due to their drastic form, but it can be denied that they touch political problems in a unique way, paying attention to an individual body’s specific vulnerability to power.

These are the arrests, court trials and imprisonments which are the artist’s target, and the bodily harm is mostly means to an end, not an end in itself.

The artist explores why symbolic self-harm in public is so feared by the authorities who on everyday basis tolerate much more disturbing examples of pathology and cruelty.